un Projects is based on the unceded sovereign land and waters of the Wurundjeri and Boon Wurrung people of the Kulin Nation; we pay our respects to their Elders, past, present and emerging.
un Projects
⤂
un 7.2

In June and July 2013, Sean Peoples staged Channel G at West Space, transforming the gallery’s back space into a temporary, makeshift film studio that broadcast live and unscripted video content produced by an ensemble of local contemporary artists and friends of Peoples. As viewers of Channel G, we were privy to a wide range of ad hoc entertainment: from programs that engaged and subverted conventional TV genres and formats—such as news programs, infomercials, cooking demonstrations, quiz shows and interview panels—through to chaotic, spontaneous and absurd situations and skits. With more than one hundred participants involved and a total of sixty hours of footage captured (including one uninterrupted stretch of thirty-six hours), this was a highly ambitious and unprecedented project to be staged in a Melbourne artist-run initiative that stands as a distinct event, both in terms of its content and medium. 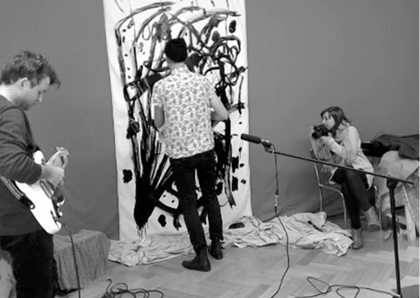 Provisional in nature, Channel G’s most ostensible televisual precursor is the grass-roots model of community TV which, although often lampooned for its lack of professionalism and production values, nonetheless offers a productive way to counter passive spectatorship and champion a focus on localism otherwise missing in the scope of national and international broadcasting networks. There was certainly a similar slack, yet idealistic energy behind Channel G that, through Peoples’s unreserved emphasis on collaboration amongst his peers, promoted a sense of community. Peoples is careful to distinguish Channel G from both his individual practice, and his work with Veronica Kent as part of The Telepathy Project.1 Although regularly featured on screen in many guises, he primarily acted as a support for his collaborators, simply providing the means for others to create their own content. Positioning his participants as the creative producers of the work, Peoples’s project drew upon the form and theory of relational aesthetics to create a productive type of social environment.

Peoples’s footage now serves as a kind of selective record of a moment in Melbourne. With many casual instants of socialising caught on screen (eating, drinking, gossiping, making music and dancing, amongst countless other communal activities), Channel G gathered an expansive group of artists currently working in Melbourne and established a collective context for those involved. The scope of this social clique was made most explicit in programs such as Ronen Becker and Taree Mackenzie’s ‘Table Tennis World Championship’ and Oscar Perry’s ‘Artworld Poker’, which each invited large groups of friends of the artists to informally compete in tournament-style matches across the ping-pong table and poker board. Currently developing an online archive for the wealth of material he recorded across nine days of filming, Peoples himself positions the project as a type of sprawling time capsule; a social history of a particular place and time that provides insight into Melbourne and some of its artists circa 2013.^2 It is part of the success of the project that, due to its vast amount of content, there is too much to recount in detail here; suffice to say, in many ways, Channel G’s broadcast was as much about who as it was about what was televised.

Another clear point of reference for Channel G’s structure is the telethon; a special type of broadcast that lasts many hours, grappling to fill airtime as it attempts to raise funds for a worthy cause. Indeed, forgoing conventional forms of narrative-driven entertainment,watching Channel G’s live feed more often than not equated to an experience akin to action-packed boredom. Many personal and banal preparatory acts were broadcast: dressing up, setting up props and cleaning up, to name a few; whilst at various times viewers endured contributors themselves searching for or streaming content online, creating an uncanny type of feedback loop where the internet was used to watch others use the internet. In most cases Channel G dislocated artists from their usual practices or ways of making. Shows like Simon Zoric’s ‘Simon and Simon’ (which saw Zoric, accompanied by a ventriloquist doll of his own making, consume numerous cans of beer in almost total silence); Noriko Nakamura’s ‘Pawsitive Energy’ (in which Nakamura, dressed in an animal suit, performed yoga poses that mimicked the usual postures made by cats); and Masato Takasaka’s ‘Money for Nothing’ (which used a computer-generated sound distortion to describe theories of the readymade) were all loosely situated in relation to interests and forms found in each artist’s practice. What viewers predominantly witnessed, however, was artists totally removed from their usual contexts and materials. Without a quantifiable or discernible audience, Channel G became a platform for experimentation and play. Some participants consciously chose to ‘perform’, such as Trevelyan Clay who, titling his show ‘Pure Trev’, stared meditatively at the camera for an extended period of time, and Holly Childs and Maffew Linde, who recreated David Letterman’s infamous interview with Madonna from March 1994. Others were simply themselves on screen—for example, James Barnett, Eric Demetriou and Christopher Sciuto’s ‘Little Bitch’ session was literally a typical loquacious conversation shared by the three transposed to the Channel G studio setting. And more than a few acts veered towards the awkward and unwatchable.

While engaging directly with the medium of television as a programming format, Channel G also existed beyond it (what David Joselit—as an advocate for interfering with the highly controlled space of television—might call ‘breaking open a closed circuit’3). Incorporating multiple cameras, a ‘green room’ and a ‘control panel’ that was used by Peoples to edit content while it unfolded, plus a much-used green screen that provided elaborate backdrops for each program, the gallery space acted as an open studio; a sort of ‘behind the scenes’ on permanent display for the duration of the exhibition, where gallery visitors could witness the filming in progress.

In spite of its technical site of production being grounded at West Space, Channel G was not predominantly experienced in the gallery. If, as Boris Groys supposes, contemporary spectators are spectators on the move,4 then Channel G prefigured our shifting context for spectatorship by inserting online digital platforms as its main viewing arena—with performances streamed live via channelg.tv and the website Ustream, as well as daily schedule updates and extracted playbacks appearing erratically on Channel G’s own Facebook page.The project existed in both real and virtual space, creating a decentralised model of engagement that afforded multiple typographies and temporalities for viewers to navigate.
Oscillating somewhere in the zone predicted by Marshall McLuhan where electronic media would come to replace visual culture, Channel G can be seen as a definite precursor to how a new generation might operate in the post-analog age. Given that the internet now serves as a general environment within which all cultural production takes place,5 Channel G stands as a practical application of media technology and network communications within the realm of contemporary art. Perhaps most notably, the many novel modes of spectatorship and engagement that the project generated provide insight into how a work mediated by emergent screen cultures can exist beyond the site of the gallery. What else might be made of this, as yet, under-explored and under-utilised territory remains to be seen.

Patrice Sharkey is an independent curator and writer, and Assistant Curator and Registrar at Monash University Museum of Art.