un Projects is based on the unceded sovereign land and waters of the Wurundjeri and Boon Wurrung people of the Kulin Nation; we pay our respects to their Elders, past, present and emerging.
un Projects
⇠
un 13.1

1
We Got 'im
Hugh Childers and Bobuq Sayed
2
Desaparecido
Freya Rose
3
Whacked
Destiny Deacon
4
Carnage in the Eye of the Beholder: On Postmodernism and Nine Eleven
Holly Keys
5
Big Brother: Securitainment and the Racialised Logic of Suspicion
Gilbert Caluya
6
Beyond Human: Artists in Conversation
Hoda Afshar and Behrouz Boochani
7
His legacy to the colony; their ongoing privilege
Dale Harding
8
Notes on Bodies That Matter on The Beach
Natalie Ironfield and Nayuka Gorrie
9
Post Nine eleven
Nur Shkembi
10
On Material Speculation
Carol Que
11
Cruelty and the Theatre of Jihad
Bahar Sayed
12
Contact Sheet from Twins (2001)
Union Gaucha Productions with Jeff Preiss
13
Artefacts and Art of Fiction
Ceri Hann
14
What about all the very private moments like smiling at someone in Tower One, the red gum or the white plastic bag that one evening took my breath away?
Will Kollmorgen
15
To (Phase) Cancel the Cops: An Acoustic Science of Insurrection
Bridget Chappell
16
Decision 2000: What I Didn't Find in Africa
Zacry Spears
17
Normative Realities of Voiding Effects
Anabelle Lacroix
18
Aesthetics of Racism in the Editorial Cartoon
Safdar Ahmed
19
Two Twins
Ava Amedi
20
How to make an anti-terror bollard
Tim Marvin
21
Artefacts and the Art of Fiction
Ceri Hann

History is the fruit of power, but power itself is never so transparent that its analysis becomes superfluous. The ultimate mark of power may be its invisibility; the ultimate challenge, the exposition of its roots.1
-- Michel-Rolph Trouillot 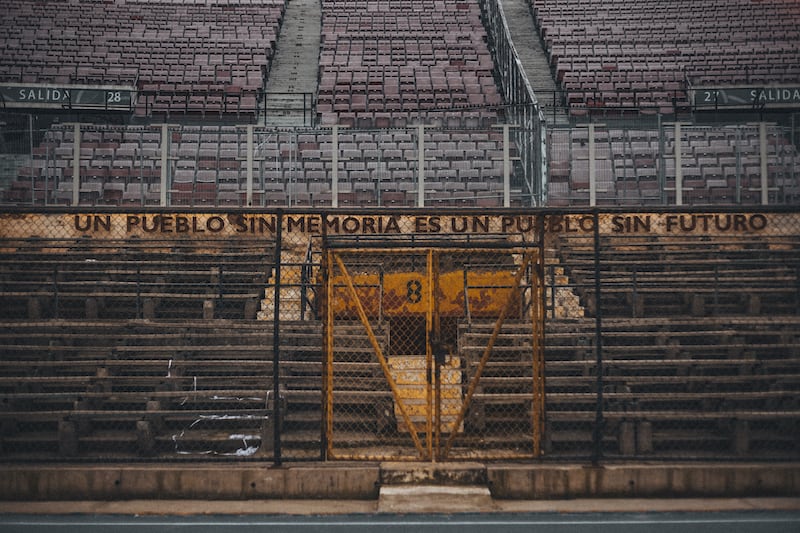 On 11 September 1973 the socialist president of Chile, Salvador Allende, was deposed and murdered in a military coup d’etat. The leader of the coup, General Augusto Pinochet, commenced a seventeen-year reign of terror during which his police and military killed, ‘disappeared’ or tortured at least thirty thousand activists, leftists and indigenous Mapuches.2 The national soccer stadium in Santiago became an improvised prison within which people suspected of dissent were beaten, electrocuted, burned and executed. When international officials were sent to inspect the condition of the stadium’s turf ahead of a World Cup qualifying match, police marched prisoners into dressing rooms under the stands and held them, at gunpoint, in silence.

The United States government and Central Intelligence Agency (CIA), assisted by operatives of Australia’s intelligence agency, trained, equipped and enabled Pinochet’s military. In presiding over this coup, the United States and its diplomatic lapdog brought decades of peaceful democratic rule in Chile to an end. They also deposed the only Marxist government in world history that was democratically elected and enjoyed broad-based support.

On 11 September 2002, the twenty-ninth anniversary of the coup, Chilean President Ricardo Lagos attended a memorial ceremony at the United States Embassy dedicated to those Americans who lost their lives in the attacks on the Twin Towers. The people of Chile, many of whom remained in that state of paralysed grief that comes with never knowing if disappeared friends are dead or alive, were asked now to spend their day grieving the United States’ dead. Outraged, Chilean intellectual Tito Tricot penned a heartfelt rallying cry:

A question that arises for us, revisiting Tricot’s call to all nations to stand with Chile against this calendarial brand of American imperialism, is this: if the United States must not be allowed to steal Chile’s day, why is un Magazine aiding and abetting them?

This question appears facetious, or satirical at best. Yet it reveals some broader implications for the role of the artist in politics that, in an issue of a publication that concerns itself directly with borders, Islamophobia and state violence, should give us pause.

Could un Magazine have proposed an entire issue centred around the relationship between contemporary art and 11 September 1973? Of course not. This is in spite of the fact that the submerged history of the Chilean coup contains abundant source material for artistic practice today. Salvador Allende’s Chile represented a model of a radical, yet bloodless, democratic socialist revolution, aligned with neither the Unites States nor the Soviet Union, that might have become a model for stable and equitable economic development across the Global South. Instead, through a conspiracy that included sending a generation of Chilean economists on scholarships to study at the University of Chicago, a hotbed of fundamentalist free-market thought, Chile under Pinochet became the first country in the world to lab-test the combination of privatisation, deregulation and cuts to social spending that we know today as neoliberalism. Without the brutality of Pinochet’s military rule, it would not have been possible to break unions, slash wages, privatise schools and otherwise enforce the experiment that went on to inspire Thatcher and Reagan, Hawke and Keating.

In 2019, we are living through the death throes of the neoliberal economic order. A struggle is rising between reactionary, neo-fascist forces looking to military rule and demonisation of immigrants, and a democratic socialist populism associated with figures like Bernie Sanders and Jeremy Corbyn. There is a strong case to be made that recent reinforcement of national borders, racial paranoia and regional destabilisation—factors which are so readily attributed to Nine Eleven and the War on Terror—owe far more to the neoliberal history of paper pushing and prisons, of welfare lines and wellness fads, that began at the precise moment when Chile’s unique socialist vision was brutally extinguished. As a hook on which to hang our aesthetic speculations of the present, why not 11 September 1973?

The answer to this question, of course, is that art and art criticism centred on the Chilean coup could not be understood or even seen by most audiences. The semantic and aesthetic qualities of art—what a work of art means, how it looks and what it does — do not inhere in the content or physical form of the work itself. Rather, they inhere in a meeting that takes place in the mind of a viewer between the work’s content and form, and the context that surrounds it. This includes its institutional context, certainly, but also the context set by signs and symbols, cultural commonplaces, languages and histories, all of which are either familiar or unfamiliar to the person viewing the work. That is to say, an artwork is a concatenation of allusions. Without a panoply of cultural artefacts to which it can allude, a work of art cannot mean, or do, anything.

The problem for artists (and art magazines) that seek to involve themselves in politics—particularly critical or counter-hegemonic politics—is that the epistemic horizon that determines what it is possible for art to say or mean is itself a product of power. un Magazine benefits from our culture’s hyper-saturation with the United States’ Nine Eleven. Those Twin Towers provide an intricate scaffolding on which allusions, images and memories can be hung in complex dialogue. un Magazine will profit from this saturation to produce art and art criticism that feels relevant, edgy, critical and even beautiful—in ways that art about Chile’s Nine Eleven never could be. Yet when we piggyback American hegemony and cultural imperialism to provide the contextual ingredients that make of some inert object a work of art, is it possible to turn on that hegemony and criticise it? Or do we only reinscribe and reenact it?

This problem is particularly acute where I write, on the continent called Australia, where the horizon of what it is possible to see, speak or know has been transformed over the last 233 years by apocalyptic violence against peoples, languages, cultures and meanings. The coloniser’s culture gives us many tools to understand and appreciate a Fiona Hall, but no means to even begin to see a Dorothy Napangardi. When we take up the master’s tools, can we destroy the master’s house? And if not, what ethical responsibility results from our complicity with the violent dominant culture that gives most art objects their meaning and significance? 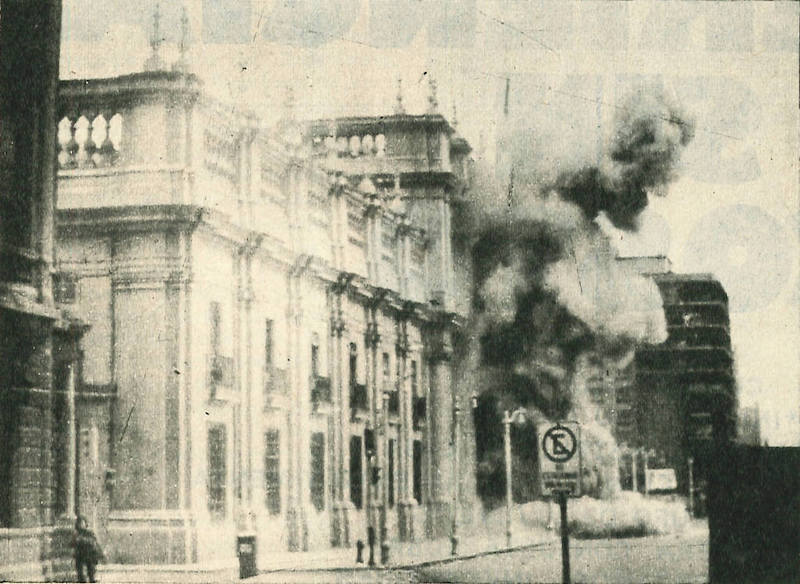 If you don’t care much about Chile’s Nine Eleven, and you have a lot to say about that of the United States, that’s not surprising. You’re one of the great majority. In fact, it’s absurd to write about Chile at all in this context. Yet this absurdity is not an innocent one. It is the product of conspiracy and brutalisation: of people, records, memories and of the dates themselves. It is, for the United States’ empire, an historic achievement.

How far would we go to fight for substantive equality in the aesthetic field, or in the arena of grievability? To create a world where our capacities for meaning-making were no longer shaped by imperial power, where all human (and nonhuman) lives enjoyed an equal right to be aesthetisied, fetishised, canonised—and mourned? Such a struggle would surely require, first, a global moratorium on grieving anybody who died in the Twin Towers, since they have already been memorialised to a degree virtually unheard of in human history. All representation of these people, even in their greatest heroism, would need to immediately cease in order to commence a process of levelling the field of collective attention, spreading the cultural and aesthetic spotlight over the subaltern stories and actions that have shaped history over recent decades.

We would need to uplift those sixty-eight who died on 11 September 2018, in a bombing in Nangarhar Province, Afghanistan. We would need to knock on the doors of New Yorkers who still grieve lost parents and friends and demand that they set aside their next September 11 to participate in Chile’s national day of mourning.

Copies of un Magazine would need to be burned.

Freya Rose is a facilitator, community organiser and writer who lives and works in Melbourne. Freya is interested in the emotional work of building powerful movements for social justice.