un Projects is based on the unceded sovereign land and waters of the Wurundjeri and Boon Wurrung people of the Kulin Nation; we pay our respects to their Elders, past, present and emerging.
un Projects
⇜
un 12.2

Call and Response: A Dialogue on Collaboration with/for Pat Larter 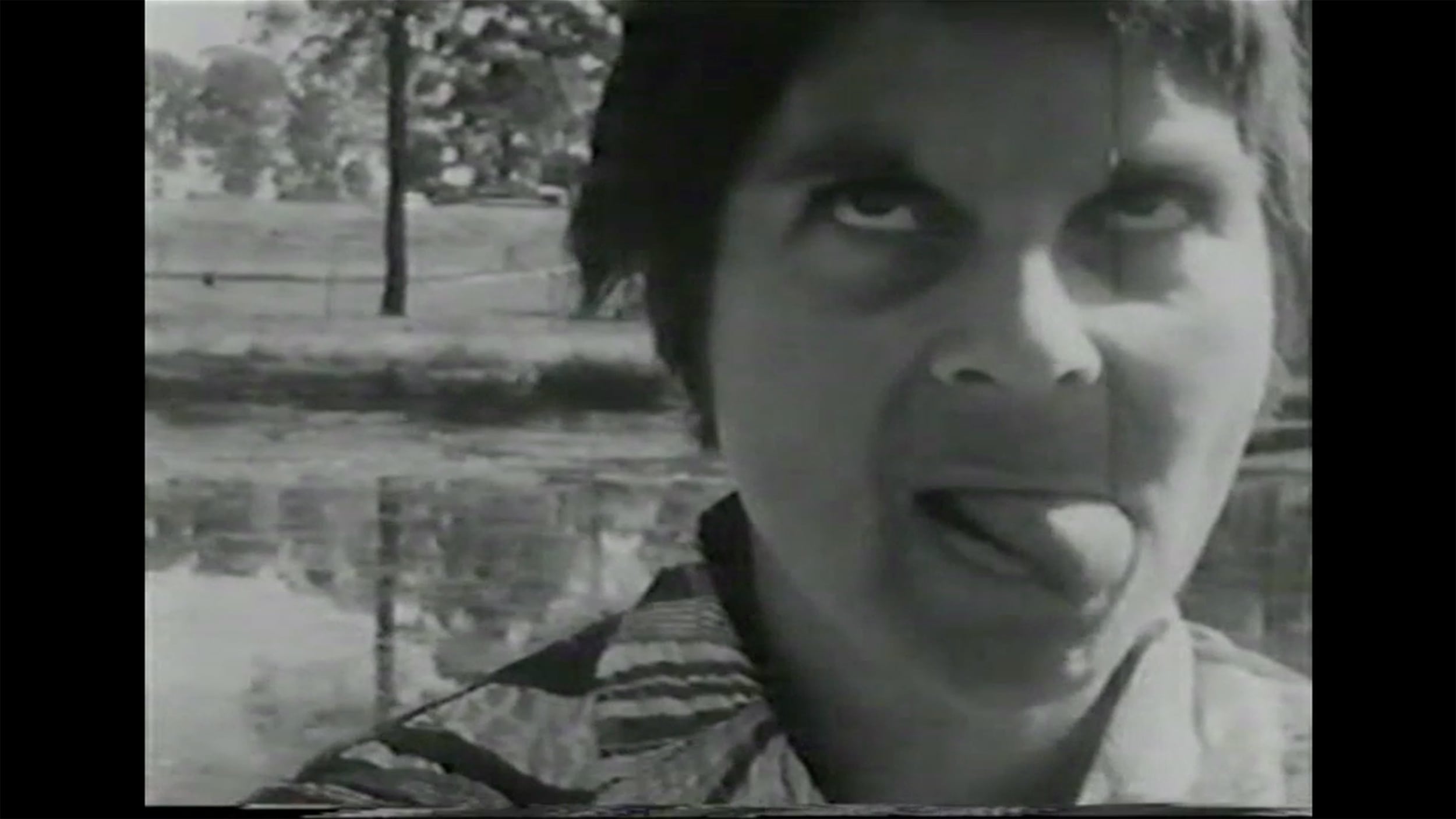 In my experience, long-term collaboration is always driven by friendship. A collaborative relationship like ours is able to distil all the messy years of friendship, constant conversations and arguments into our work. Making art together is intimate. You are vulnerable and have to take risks, negotiate and compromise. When I think about it, I think about collaboration driven by artists, versus organisations pairing up artists and communities. In my experience, artists initiating a collaboration can be the most fruitful. As a younger artist I really needed the support and intimate connection of collaborating with friends to battle negative beliefs about myself. My desire for collaborative working relationships is rooted in my own experience of sexuality, class and gender. I didn’t know it then, but as a young queer artist from a small town, not being taught about people like me at art school impacted on my confidence. The collaboration with you, Kate and Frances as Barbara Cleveland, and later my connection to a collective queer community has been formative in finding my own voice. Collaborating with friends can make working conditions somewhat tenuous though. What are the risks of this?

Certainly, collaborating as friends is a risk because the success of the work is reliant on the friendship, and if things go wrong with the collaboration the friendship suffers. On a pragmatic level, collaboration poses a risk to artistic labour time. In an industry that is built on the mythology of the individual artist genius (typically white, straight and male) who produces singular art ‘objects’, it is difficult to find a space for collaborative practice, and even more difficult to convince art institutions that they need to cover the labour associated with producing collaborative art works. We have seen a shift in the last decade as collaborative practice has started to enter the museum, alongside the rise of social practice, but when it comes down to it the arts industry is structured around the display, collection and preservation of objects produced by individual artists. Collaboration challenges that structure, asking the institution to reconsider how value is being produced, which is perhaps why there is such a long history of feminist art collectives and queer-feminist collaborations. For instance, in the local context, a few notable examples include: VNS Matrix, The Kingpins, Hissy Fit, Get to Work and Deep Dirt Collective. Do you think collaboration is an inherently feminist way of working?

I think it depends who is collaborating to determine if it’s a feminist way of working, and if everyone involved brings a shared feminist ethos to the working dynamic. Not all forms of collaboration are inherently feminist. Often artworks have been collaborative in the studio but one artist gets the credit publicly, or the collaborative labour is not acknowledged by all involved. I would say we are a feminist collaboration, in that the way we work attempts to critique hegemonic structures in the arts. I agree that modes of collaboration can inherently challenge the unquestioned structures embedded in the art world to preference the single genius white male artist. But not all collaboration has this political persuasion. This brings me to the ethics of collaboration. When we made our video In Search of Pat Larter (2017), I viewed that as a collaboration between us and Pat Larter, by writing speculative letters to her based on her objects and photographs. Is it ethical to call this collaboration, particularly when it is with someone who has passed? Can we claim to be collaborating with Pat?

The ethics at stake in collaboration are, in part, about making the terms of the collaboration transparent and acknowledging the labour that goes into that process. For instance, the example you raise of the studio artist who outsources their labour to others is not seen as collaboration, partly because the cultural capital of such works oscillates around the brand of that artist. There are added complications when you ‘collaborate’ with someone who is no longer here. I see our work with/about Pat as a kind of performative collaboration, in which we imaginatively connect with her through the things she left behind. However, she is not here to participate in this collaboration and never agreed to be part of the work. In reality, the collaboration is between you and I, but it has been productive for us to speculatively communicate with Pat through the act of writing letters. I think of this gesture as an extension of the international mail art project that began in the 1960s, writing back to Pat, as so many artists did during her lifetime, in order to make her contribution to this field more widely known. Beyond her key role in the mail art network Pat was a prolific artist, making important works in performance and photography from the early 1970s. However, her legacy has been obscured by her role as ‘muse’ to her husband Dick Larter, the well-known Australian painter. How do you see collaboration operating in the relationship between the muse and the artist? 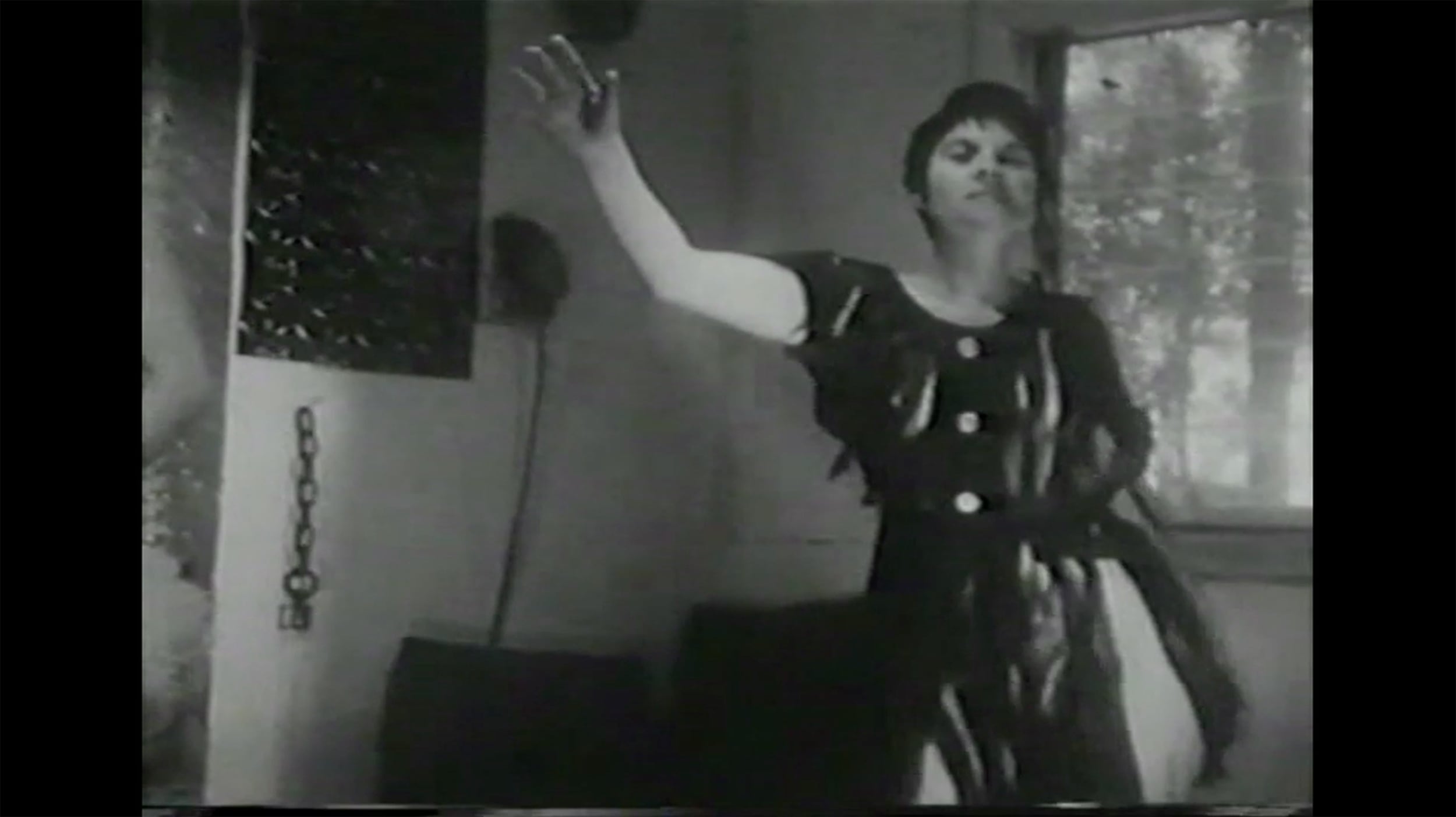 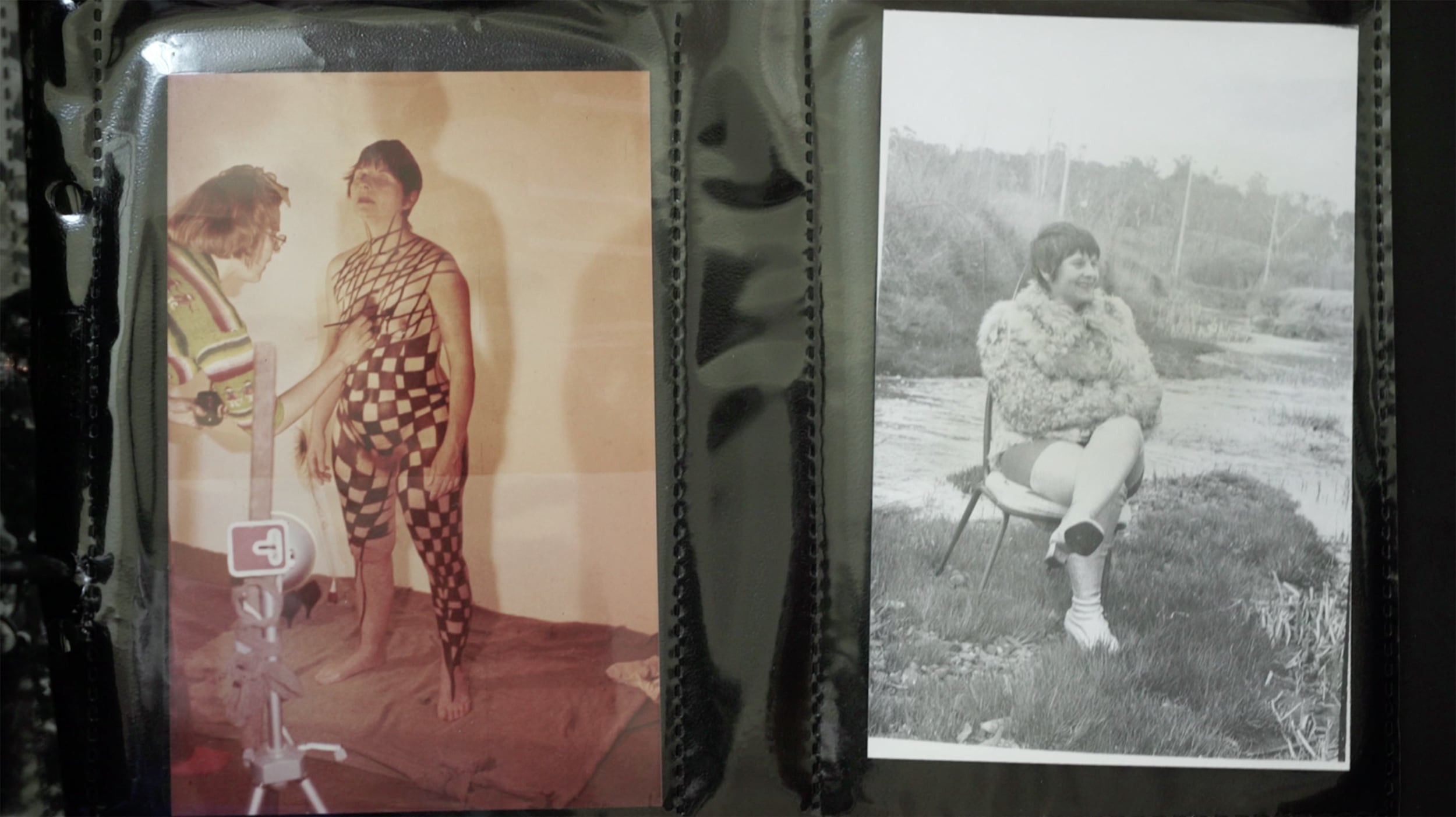 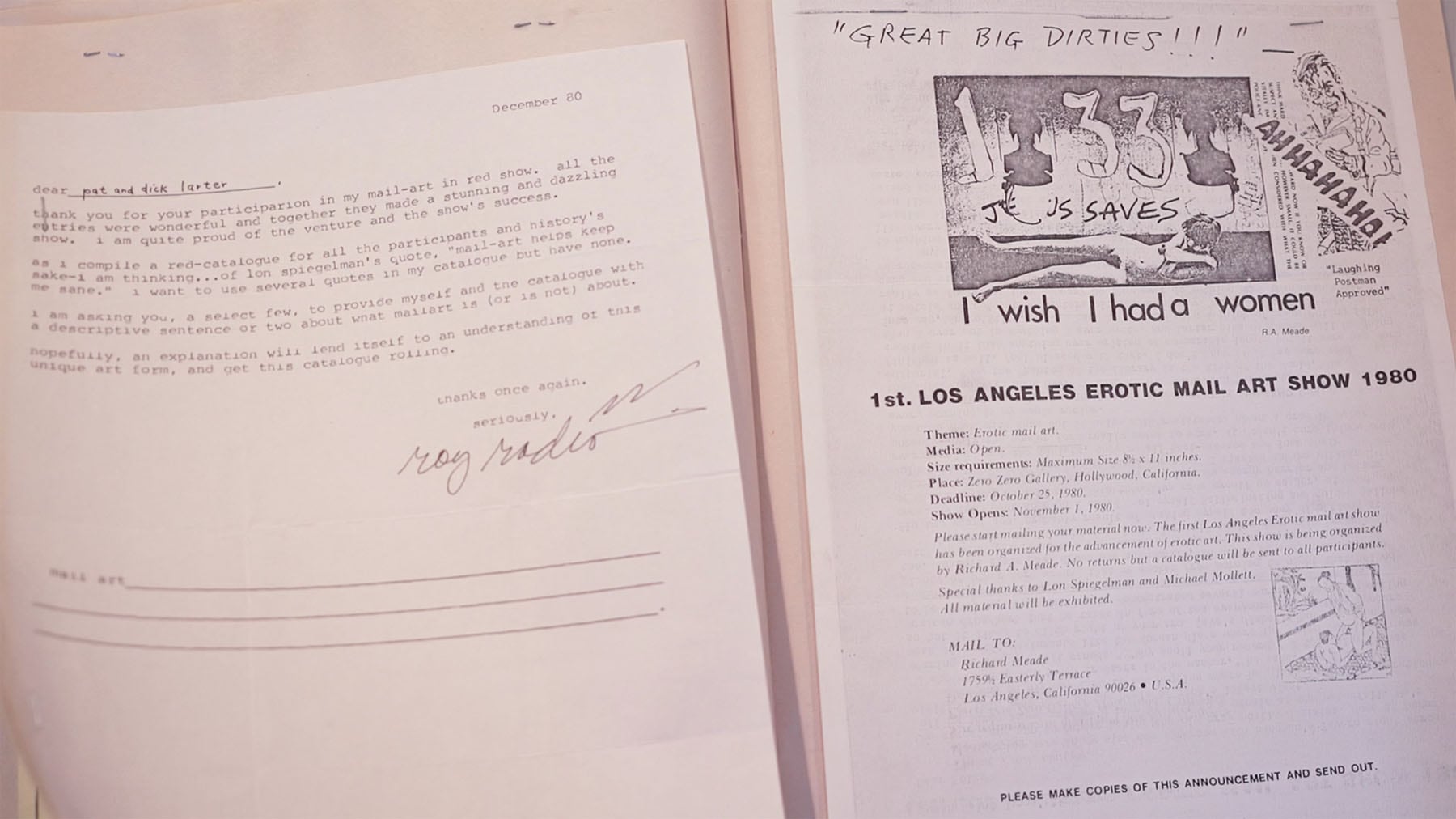 The act of going through Pat’s significant archive at the Art Gallery of New South Wales, which holds one of the largest mail art archives in the southern hemisphere, felt like a type of intimate time travel. We were allowed access into her world — to see and touch her handwritten notes, address books, photo albums and mail artworks. She came to life during those sessions in the archive, her physical presence was so real and yet at the same time her absence was distinctly felt. Our speculative letter writing to her conjured up the tradition of mail art correspondence and I remember wishing she was present to write back to us. The artist/muse concept is often a muddy gendered relationship. In art historical terms the artist/muse myth continues, almost always understood as the (white) male painter and his female ‘inspiration’. The muse is decoration or a catalyst for works that is rarely given her own creative agency. The collaborative relationship between Pat and Dick has historically framed Pat as the muse to Dick, and not as an artist in her own right. For example, the National Gallery of Australia has several uncredited works by Pat in their collection. Though the works are all signed R. Larter, it has been suggested that Pat is the sole author of at least one of the works and a collaborator on the other three. This makes me wonder how many other unnamed female muse/artists remain uncredited that didn’t have the same art world access as Pat. How can the art historical archive account for different working relationships beyond the sole (male) genius author?

The gendered hierarchy of the muse/artist relationship is so deeply ingrained in art historical discourses and practices it is hard to imagine how these power structures could radically shift. Certainly, we have seen small changes, and corrections to the art historical record. For instance, when Christo and Jean-Claude came to Sydney in 1969 to wrap the coast of Little Bay the work was attributed to Christo, despite the collaborative nature of the project. In more recent times, this work and others have been revised to acknowledge the key role of Jean-Claude. To a lesser extent, we have seen a shift in the way Pat’s work has been received, through a renewed interest in her work over the last few years by a younger generation of artists and curators. However, as you point out, the work in the National Gallery is still credited to ‘R. Larter’, and in their films Pat is not always acknowledged as a collaborator. When you watch the films it seems like a collaboration in which Pat is making decisions about how to perform and engage with the camera. Certainly, this can be read as a muse/artist relationship in which the subject (Pat) is inspiring the artist (Dick). However, if we look again, we can see a collaboration between two artists exploring sexuality, intimacy and creativity. Yet, the historical conditions determine how this work has been named and understood. Do you think collaboration offers a way to rethink these power dynamics? Or do these same hierarchies end up being reproduced through collaboration? I’m thinking here of the famous example of Judy Chicago becoming an authoritarian figure while working on the ‘collaborative’ feminist project The Dinner Party (1979).

The Christo, Jean-Claude story reminds me that history is malleable, uneven and not very well distributed, and depends on who is telling the story. It reminds me of the text we wrote for the video work with Barbara Cleveland, Bodies in Time (2016): ‘History is a
story told by one, two, three, four.’ For me, feminism is one method of addressing and revising the past in the present. It’s aspirational to consider collaboration as breaking down the hierarchies of the art world. As you mentioned with the Judy Chicago example, collaboration often reiterates power because we are all operating in and are complicit within a patriarchal capitalist model of working. This model preferences the solo profit maker as the signifier of success. If we could shift this thinking, perhaps the art world might be more open to other models of working, making and valuing. Considering all these structural issues in the artworld and issues with collaboration, why do you continue to work in this way?

Sometimes I really don’t know why I continue to work collaboratively. As we’ve discussed, there are a number of economic challenges and a range of difficulties associated with making work in this way. Often you work more than you should, or feel like your labour is not being valued. In many ways it’s easier to make art by yourself, or at least be the individual at the front of what might be a collaborative process. Yet, collaboration continues to be the primary way in which I make art and make sense of the art world. This is, in part, because collaboration forces a questioning encounter with the art institution, which creates an opportunity to critique the way in which value is produced. I don’t want to romanticise the act of collaboration but, as we have witnessed, a group of artists working together does require institutions to think differently about the way they work with artists. Ultimately, I return to collaboration because of the social aspect of working with other people. I see making art as an engagement that begins with a conversation and a connection between people and ideas. In our case, this has been an ongoing dialogue and friendship, and while there have been challenges and compromises along the way, I am still genuinely interested in where the conversation will take us next. Diana Baker Smith is an artist and lecturer in the Faculty of Art & Design at UNSW Sydney.

Kelly Doley is a queer artist, curator and arts manager of Scottish descent, raised in the Northern Rivers and currently living and working on Gadigal land (Sydney). She has over ten years experience working across the independent arts sector, in government cultural departments and with cultural institutions, museums and galleries to deliver national and international projects.