un Projects is based on the unceded sovereign land and waters of the Wurundjeri and Boon Wurrung people of the Kulin Nation; we pay our respects to their Elders, past, present and emerging.
un Projects
«
un 12.2 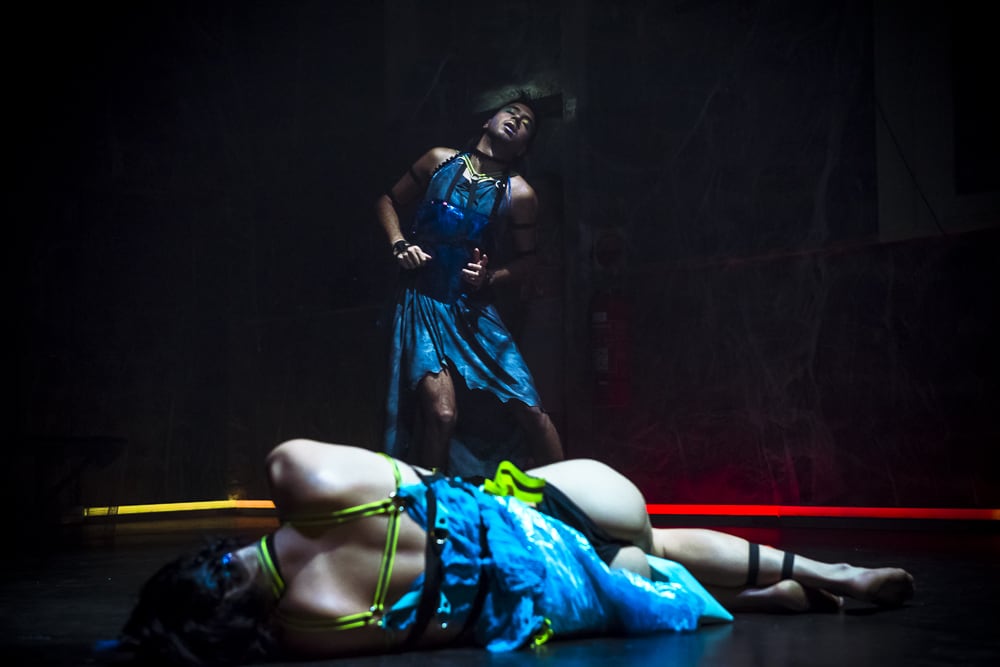 THE FUTURE OF GENDER IS A BINARY Bobuq’s role in Estrogenesis changed as we tried to find a way to be clear that they were an outsider to a white trans narrative, but also have their own active part in the story. Early on they played a researcher from the future of the future looking back on a trans rebellion to the corporation of transition (called Hormonium) and in conflict with their boyfriend who wants them to fulfil the role of the ‘hung Arab top’. Bobuq brought in an article they had read about the aggressive sexuality that is projected onto certain brown and black bodies in the queer sex economy and how this is related to orientalism, colonialism and Islamophobia.1 Trying to find Bobuq’s place in the plot led us to talk about the link between colonisation and the ever increasing enforcing of the gender binary. Because of white supremacy, we suspected that the future of trans-ness will be an ever more rigid gender binary. In this future world the trans journey is about perfectly passing as the gender opposite to what you were assigned at birth. Non-binary gender doesn’t exist. This compulsory binary feeds into and upholds colonial structures. In the final work Bobuq played Shafik, who wanted a resurrection and proliferation of non-binary genders, but Hormonium (the medical machine) takes over their amazing creations. Shafik is not trans or white enough to transition in this super binary future. They develop technologies for others that they could never use themself. In talking about the pathologisation of trans-ness we talked about how trans-ness can(not) exist outside of the medical system. ‘What bodies are entitled to trans-ness?’. Bobuq wanted to play someone whose relationship to trans-ness and the system wasn’t clear-cut. Shafik couldn’t transition because it would have required them to be vulnerable, assimilated, specific. Their desires blur; to be, to fuck, to destroy, to survive. From Shafik’s betrayal monologue:

Trans fems bleeding into fugitives, running in the dark, buried under ruins, peering at me from across the borders. I never got the chance to write my gender manifesto, I was homeless, at work, on the run.

Shafik was masculine in relation to the express femininity of the trans outlaws and nurse, especially in the space of the sex on premises/brothel. Masculinity is read by an audience onto my trans masc and Bobuq’s non-binary body because of the relationships we set up, but it sits uncomfortably on histories, longings, cultures and swishy mannerisms. Bobuq identifies as an ‘assertive bitch’ in the collective. They wanted to play a character that is unhinged, manic and despicable for a good reason. A denial of power and agency was this reason. We took this further by having Shafik help Subject 33 (Mossy) and XY (Romy); providing a pure form of hormones outside of the evil ‘Hormonium’ corporation. But these girls kept the hormones to themselves, squandering them away and betraying Shafik. So in turn Shafik betrayed them back to the system. Bobuq spoke a lot about how we could complicate trans narratives of empowerment. We wanted to make different characters’ freedoms and expressions rub against and destroy each other. Mick Klepner Roe, director of Embittered Swish, reflects on collaborating, and on bodies rising and falling in Estrogenesis (Next Wave, 2018).
➽
Equated Dissonance
Ainslie Templeton
⤙
The amateur-amante as a future tool: An interview with Critical Días (Rebecca Close & Anyely Marin Cisneros)
Madeleine Stack
Filed under Article Mick Klepner Roe Ainslie Templeton Bobuq Sayed Debris Facility Embittered Swish Jacs Antcliff M'ck McKeague Mossy 333 Next Wave Romy Fox Shian Law
Advertisement
Advertise with un