un Projects is based on the unceded sovereign land and waters of the Wurundjeri and Boon Wurrung people of the Kulin Nation; we pay our respects to their Elders, past, present and emerging.
un Projects
⇐
un 14.1 This essay narrates the direction of contemporary art practices in post-1998 Indonesia through a discussion about care, viability of artists’ projects — using Parasite Lottery, Gudskul and Serikat Sindikasi as case studies — and the sustainability of cultural ecosystems. It provides historical accounts of how these initiatives emerged in contemporary Indonesia, and the ways that they serve as modes of survival. Here, I explore how Gudskul, Parasite Lottery and Sindikasi’s practices articulate their questions around, and imagination of, sustainability. Parasite Lottery is an art project conceived by Wok the Rock, a Yogyakarta-based artist, curator and music producer. It is a collective lottery system for art organisations and artists’ collectives, with a mechanism based on arisan — a cross between the lottery and a collective saving system practised in many communities in Indonesia. The project was initiated during Wok’s residency hosted by Casco Art Institute in Utrecht, the Netherlands, in 2016. During his residency, a large part of art and cultural sector discourse in the Netherlands revolved around budget cuts, down-scaling and closure. Since inception, Parasite Lottery was envisaged as a new possibility to sustain an artist’s productivity. It was tested among art communities in the Netherlands and serves as an alternative funding model that can be applied in different social contexts. Parasite Lottery also attempted to reflect the existing collective modes of surviving in Indonesia. Gudskul (previously known as Gudang Sarinah Ecosystem) is a cultural platform intended to integrate and amplify the projects of local artists, curators, craftspeople and communities. It is a joint venture between ruangrupa, Serrum and Grafis Huru Hara. They are artist collectives in Jakarta, and each focuses on a different matter: Serrum engages in the intersection of visual art and education; Grafis Huru Hara is a collective which explores and experiments with graphic works; and ruangrupa supports art as it intersects with urban social contexts. Serikat Sindikasi (Syndicate Union) is a union of creative and media workers. Sindikasi was established to create a safety net amid the precarity propelled by the digital economy environment. Self-organising: Alternative Cultural Infrastructure, Collectivism and Institutionalisation of Cultural Production These projects are characterised by collectivism, institutionalisation of cultural production and the rise of alternative spaces in post-1998 Indonesia. Reformation 1998, or Reformasi 1998, refers to the political period preceded by the authoritarian style of the New Order regime government led by Soeharto (Suharto) for thirty-two years; corruption, collusion and nepotism, combined with heavy-handed military operation. Following the monetary crisis in 1997, student protests and riots culminated in the Reformasi 1998 and the fall of Soeharto. Alternative spaces in this context refers to new cultural spaces — artist-run spaces, galleries, performance and discussion spaces to accommodate various practices that would be homeless otherwise. This increased activity reflected the intensity of local cultural production in Indonesia, partly responding to an urgent need to express a long-suppressed counter-culture movement. This rise of such spaces highlighted areas that had experienced various tensions during the New Order era: freedom of expression and initiatives, production of ideas and space. Creating an alternative space was a habit developed by a new generation of cultural activists in Indonesia as a model platform to fulfil their visionary ideas.1 An alternative space performs as a ‘fixer’ by providing contextual responses and applicable infrastructures to cater to the needs of the local art scene.2 From Space Provision to Lumbung, or the Barn Collective System In the early phase of ruangrupa, the contextual response to the local art scene was demonstrated through pioneering various ideas, such as the organisation of the annual festival of video art, OK. Video, and the publication of visual art journal Karbon. Providing space and facilitation still play an important role in informing the character of ruangrupa. The management of Gudskul suggests a new conceptualisation of the space as a shared space. 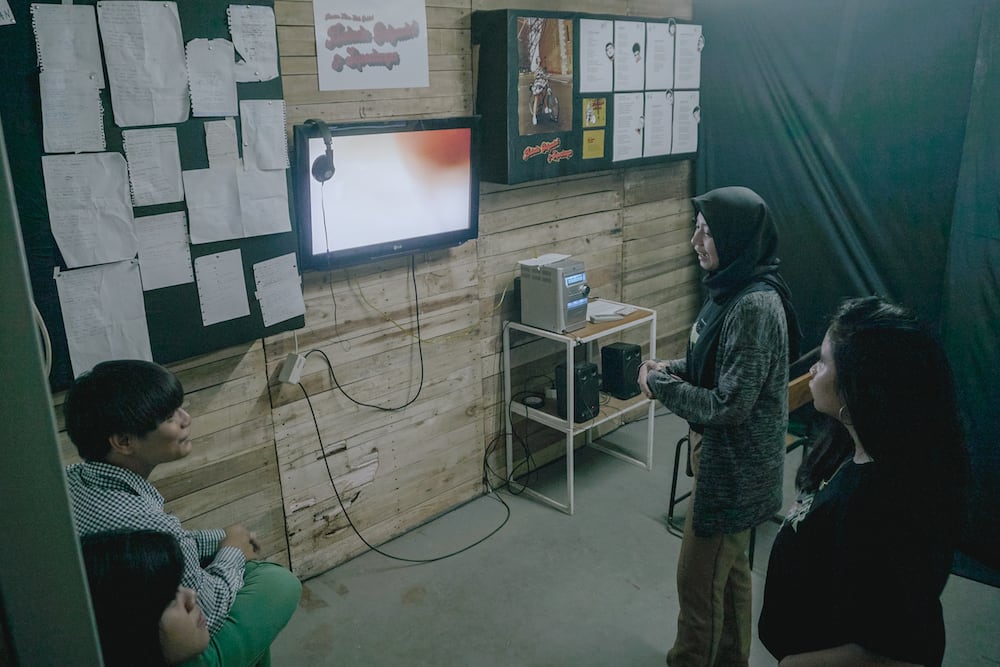 Alternative spaces produce experiences, practices and reputation. These serve as ‘traces of past collaboration’,3 from which a new collaboration can be built. Gudskul encourages ruangrupa, Serrum and Grafis Huru Hara to accumulate their pools of intellectual and creative resources. In their words, Gudskul emerged as a ‘collective barn system where all resources are stored and divided in proportion according to the needs of the collective.' Gudskul provides a learning space for younger generations of emerging artists, while providing opportunities for artist–teachers to distribute their skills and knowledge. It is important to consider the possibility of organising Gudskul within the context of how the people of ruangrupa, Serrum and Huru Hara are connected with the teachers and facilitators of various short courses inside and outside Gudskul. While the teachers and facilitators are the respective persons in their fields, they are also hangout friends, long-term comrades and collaborators. Short courses are designed according to the specific capacities of the artist–teachers with whom they want to work together in the school. According to Darmawan, the short course is an articulation of Gudskul as the ‘barn of knowledge’. More than a rich network, those involved in the school’s operation are seen as part of the art ecosystem where every individual has specific knowledge to share. Short courses provide opportunities to share such knowledge with the public, and both the initiator and the teachers involved are able to generate income through distributing their knowledge. Notes on Precarity and Solidarity During the early 2000s, the availability of cultural funding from foreign organisations was vital to inform the ‘knowledge performativity of the alternatives paces’.4 This, then, reveals the lack of funding in the field of art and culture from the Indonesian state. Parasite Lottery is described as an alternative funding system which adapts and fuses a lottery model for art funding. Parasite Lottery invites various art organisations to be the bidders, winners and hosts of lottery draws. It allows the winners to use a sum of money to spend on something that the winning organisation usually would never have the budget for. The word ‘parasite’ in the project’s name refers to the popular depiction of artists as parasites who rely on funding to conduct their projects. Such a depiction shows the precarious position of art organisations in relation to the sustainability of artistic production and wellbeing as cultural producers. Jan Newberry defines arisan as a monthly credit lottery. ‘At each meeting, members contribute a fixed amount, and each in turn receives the entire collected amount during the course of the arisan’s run (several weeks, months, or as long as it takes). Although identified here as a credit lottery, the arisan is just as easily described as a savings association.’5 Arisan thus emerges as a support institution that derives from the familial realm. It is a mechanism that provides the certainty that each person will be able to support their own needs. Arisan is often considered a typical ibu-ibu, or woman’s practice. In Indonesia, women and young girls form the groups that dominate arisan practices. However, plenty of research suggests it is not a gendered practice. To locate arisan in the everyday domain of women provides space to examine the use of arisan and the imagination of precariousness within the inter-relational framework of the wife, the husband and the family. Hanna Papanek and Laurel Schwede read arisan as part of a woman’s strategy to help deal with the economic stress of the family. Further, they see it as part of the conscious decision of a woman to actively engage in earning for and managing the family.6 In this light, I want to discuss the appropriation of arisan in Parasite Lottery to understand the role of women’s care labour in cultural production.7 I consider Marie Mies and Veronica Bennholdt-Thomsen’s views around ‘housework’ in the context of cultural production. Mies and Bennholdt-Thomsen assert that in order to promote a just perspective of the contemporary social movement, one needs to renew a perspective of women in cultural production. They propose a perspective that centres subsistence, or ‘life production’, as opposed to ‘commodity production’. To talk about support in the context of contemporary art usually means talking about certain kinds of organising and caring labour that are often gendered, or discoursed in certain ways. The kind of care that is performed is related to their multiple positionalities as women, wives and mothers. Of Support Group, Maintenance Works and Care Freelancing and the gig economy have defined the working reality of many artists. The emergence of Sindikasi shifts the sustainability focus onto mental health and other matters related to the working conditions of creative workers. It complicates notions of art practice and sustainability by pronouncing the body as the main production tool to earn a living. Sindikasi seeks to establish an acknowledgment of this issue through advocacy. Based on my conversation with Ellena Ekarahendy, the chairperson of Sindikasi, their most recent advocacy work was successfully lobbying for the inclusion of psychological issues to be addressed as part of the Permenaker No. 05/2018 Keselamatan dan Kesehatan Kerja (Safety and Health at Work). At the moment, Sindikasi is working together with other labour organisations to take part in public discourse concerning the omnibus bill on job creation. The bill threatens to erode basic existing labour rights. Sindikasi amplify their advocacy through social media, using plain language to reach a wide range of people. Apart from this advocacy, Sindikasi actively engages in various discussions related to safety, health and wellbeing at work. Their office space is open to the organisation of informal curahan hati (heart spilling over), and other forms of hangout activities. ** Gudskul, Parasite Lottery and Sindikasi demonstrate that to be useful is to show care towards a specific part of one’s environment — the closest, most immediate context. Gudskul continues the legacy of post-1998 cultural activists. It provides a space for and facilitates the dynamics of contemporary art development. Gudskul leverages the strategic position of creative communities to become public intellectuals. Both Gudskul and Parasite Lottery seek sustainability measures inspired by existing local principles. They exercise an approach to the future based on making do with what is available and maximising what they have got. In their own ways, Gudskul and Parasite Lottery serve as a sustainability model for artists and artists’ collectives. Sindikasi reminds us that the wellbeing of cultural producers depends on their willingness to expand the scope of care beyond creative production. In their view, sustainability for cultural workers means the formal assurance that the law will enable a conducive and fair working environment for all. The existence of Sindikasi bridges creative communities and policy-making. It widens working areas of artists and cultural activists. It brings closer ties to labour activism and it continues the struggle for labour movement in Indonesia.

Nuraini Juliastuti is a co-founder of Kunci Study Forum and Collective, Yogyakarta, Indonesia.