un Projects is based on the unceded sovereign land and waters of the Wurundjeri and Boon Wurrung people of the Kulin Nation; we pay our respects to their Elders, past, present and emerging.
un Projects
🠔
un 14.2

Speaking of Positionality, Your Body is a Little Off Centre

by Carly Stone and Lujayn Hourani

The paradox of form and void is that each exists by virtue of the other’s appearance and also by virtue of the other’s disappearance. The dark exists because there is light; this is obvious. You turn on the light and the dark is swallowed by its own ontology. It disappears into the outline that makes it real. In the light your body is shaped by the whole world around it, by the pressure applied and redistributed over your skin, which is your boundary. Void is shaped by the outline of a form. This is the nature of masculinity: an invisible substance whose boundary is shaped against the outline of the Other.

Carly turns off my bedroom light and my body shifts, first at its core and then at its surface. Parts of me swell and parts of me cease to. I can’t see anything and so I can feel anything I want.

‘Negative space’ conceals; as our focus is drawn to the negative, the positive is occulted in plain sight. It is the positive figure that is produced by the artist, but the negative which is named. The artist I’m talking about is Franz Kline, whose ‘action paintings’ accommodate form and void at once. Black oil on white canvas, these surfaces are engaged in a mutual correspondence; each creates the other. The middle mode, the active creating, is obscured.

The centre is where things go to be invisible. This is how masculinity effaces itself in plain sight.

In the centre of the trans flag there is nothing. A blank space representing those who embody disembodiment wedged between the colour of the girls and the colour of the boys. In greyscale, the blue and pink are all the same and everything shifts to orbit the negative — a vacancy that keeps its surrounding intact. 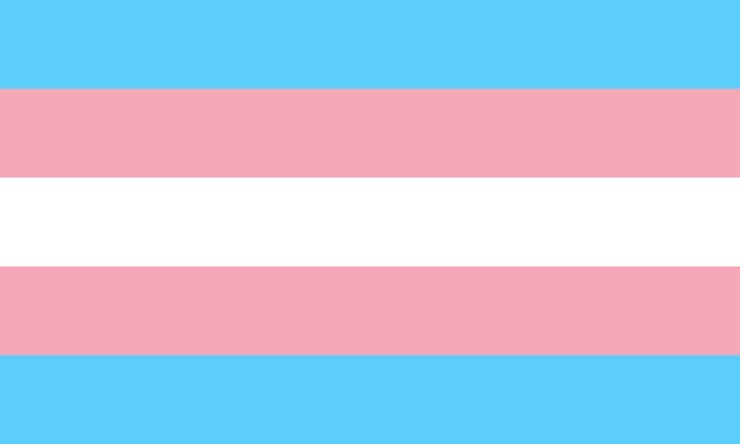 Action painting is a self-effacing act. The painting contains the trace of the artist’s body; in this way, the artist collapses into the painting, and vice versa. They paint from pure impulse so that the impulse itself will vanish into the pure. Coined by Harold Rosenberg, the term ‘action painting’ incorporates the canvas into the psychic activity of the painter. The problem I have with action painting is that it is not the active impulse that is exhibited, but the painting as a static object; the passive result of activity. The passive object is at the centre; the action, by which it was produced, is only inferred. 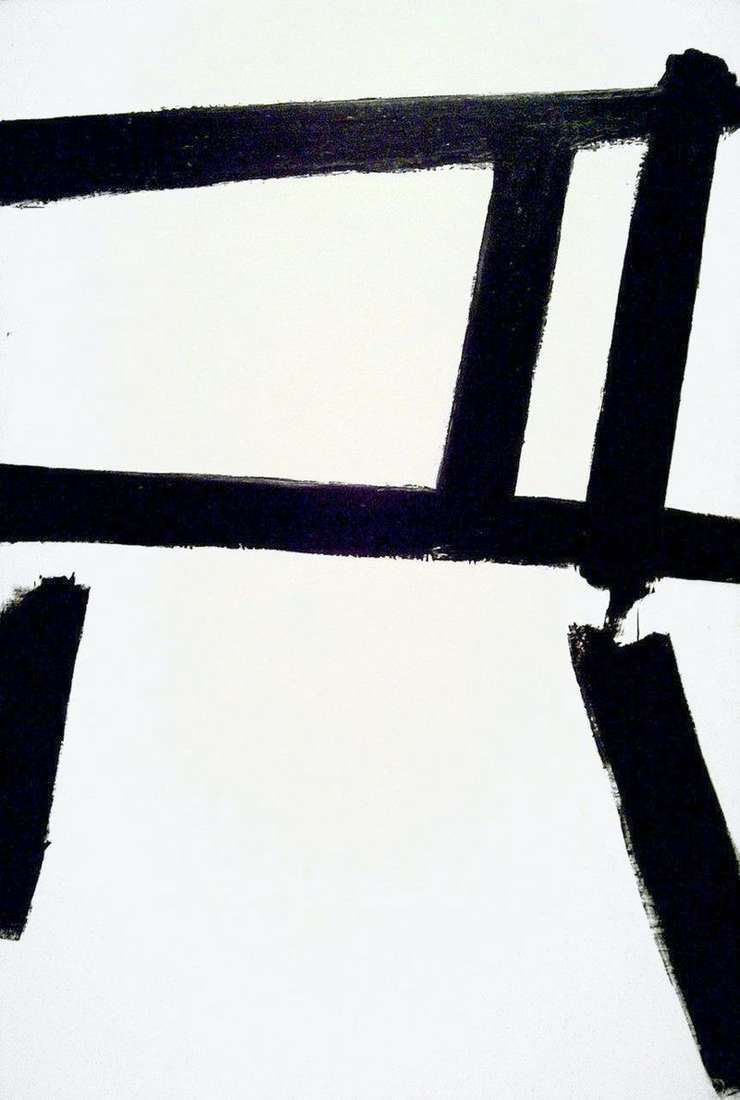 The above painting is called White Forms; in this way, the negative and positive spaces are switched. By emphasising the white space Kline renders visible the canvas, which was once a neutral object. I was 15 years old when I went to my first queer event and Z and I met in the smokers’. We leant out onto the street and Z said look at all those cis people. So I looked, and I saw the outlines of their bodies, sharpened by interpolation. These were not neutral people, they were cis people, rendered visible under Z’s trans gaze. For a moment, the cisgender position was shifted from the centre and we were in the middle looking out. The club has since been demolished; now it’s a blank space marooned in a highway, hidden by its perpetual reconstruction. The white space becomes visible when it’s shifted from the central position, when we can point at it and say there it is. Speaking of positionality, Lujayn, your bed frame is too far to the left.

Too far to the right, you mean.

I’m speaking from the position of the bed frame.

Everything that exists, exists around a centre. It has always been this way. Pilgrims around Mecca. Family around table. The earth around its core. People like centres because people like purpose; a mother and its child. Sometimes we decentre, we go peripheral, like when space is held for women and nonbinary people. Like when the As and Es of a word are swapped out for an X or a Y. But shifting our focus over to the periphery only repositions us. There is still a something, and so there is still a non-something.

We invented poles so that there could be two things that will never touch. I am holding one magnetic dart in either hand and I am squeezing them together. Their mutual evasion sounds like fwt, fwt. The dart is pointing to its target which is also its opposite. We embedded opposition into the very logic of the world. The + shaped by the outline of the —.

The body peels away from its assigned language; the voice redistributes between them.

The nonbinary is located elsewhere.

The hot and cold water thing isn’t true. I was in year five when Omar, who was in year 11, tried to scare me. He said he was going to try it when he got home, as proof. The next day I asked him how he was still talking like nothing had changed and he said back, What, you believed me? I didn’t actually do it. That shit’s not real. You’d just end up with one hot hand and one cold hand.

For one day, Omar was orbited by versions of himself. Versions that had run the experiment, versions that hadn’t. Versions that represented each of the possible outcomes. He stopped being a person and instead became that person’s periphery. I didn’t understand it. I couldn’t locate any of him. Where is he?

Oh thank god. I’ve been looking everywhere for you.

Coming into adulthood first and transhood second is orbiting. Having missed the small window of childhood in which you are allowed to be both uninhibited and yourself, your adult nonbinary identity is often playful. It is often pastel. It is often cutesy and it is often fun. But binary thinking is everywhere, and it is there to separate. Arms outstretched, it holds the playful in one hand and the sophisticated in another. fwt, fwt.

Playfulness conflated with naiveté, nonbinary is considered the ante-gender. A before, a something that is not anything yet. Everything that exists, exists around a centre. The nonbinary orbits the very conventions it is trying to escape, tethered by three letters and sometimes, depending on the style guide, a dash.

Before the invention of opposites, everything was middle. People thrummed inside each other like static in a TV, cartoons mixing into grey. You’re not meant to hold a magnet to a TV but you did it anyway. We all rushed to either pole and clustered up like darts.

The TV thing isn’t true either. I once rubbed a magnet on the screen and the cartoons didn’t budge, they wobbled and they rainbowed. The process is called degaussing. It reduces the magnetic field of an object. Demagnetising a body means pulling at its outline; dissolving the shape and colour that renders it coherent. Like us, they were made by opposition.

To degauss a person, you first have to reduce the linguistic field that renders them intelligible. For the first time you meet somebody who doesn’t rush to either pole. It’s like you’re rubbing your eye, a rainbow film tightens over everything. The shape of their body is trembling, they are shifting at the outline. Then I turn on the light.

Carly Stone is a non-sense non-fiction writer living and working on unceded Wurundjeri land. You can find their writing in many Australian literary journals. They are an Online Editor at Voiceworks.

Lujayn Hourani is a Palestinian writer, editor, arts worker and curator based in Wurundjeri Country. Their work has been published in many Australia literary journals.