un Projects is based on the unceded sovereign land and waters of the Wurundjeri and Boon Wurrung people of the Kulin Nation; we pay our respects to their Elders, past, present and emerging.
un Projects
⇇
un 14.2

A Glossary of Movement 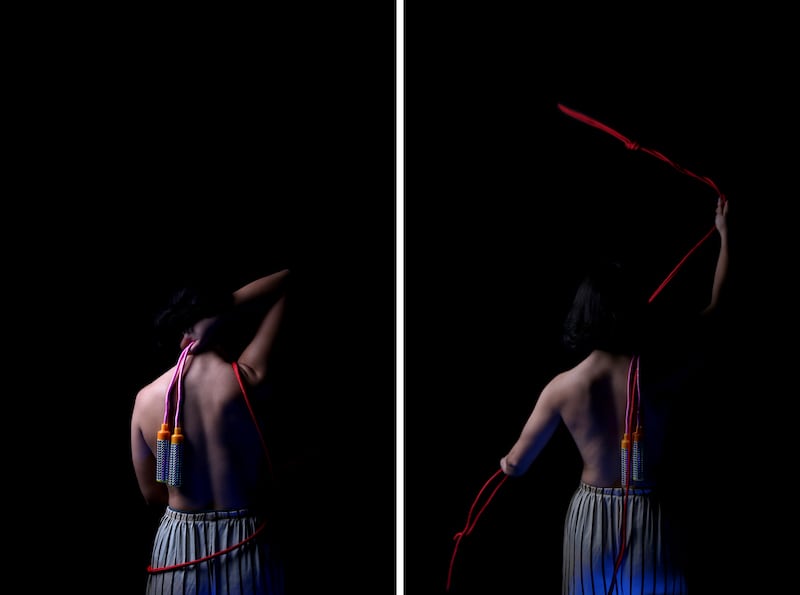 (noun) A dancer who is preoccupied not with the expressive notion of dance, but with the possibilities, communities, kinships and images that emerge from the pursuit of pleasure and rigour through dancing.

(noun) A dilemma to be inspected, in dance as much as in handbags. The anti-dancer moves towards the dilemma of authenticity rather than the possibility of it.

(noun) The takings of the day after being in the studio, the encounters with movement that rise to the top after a vigorous stirring. 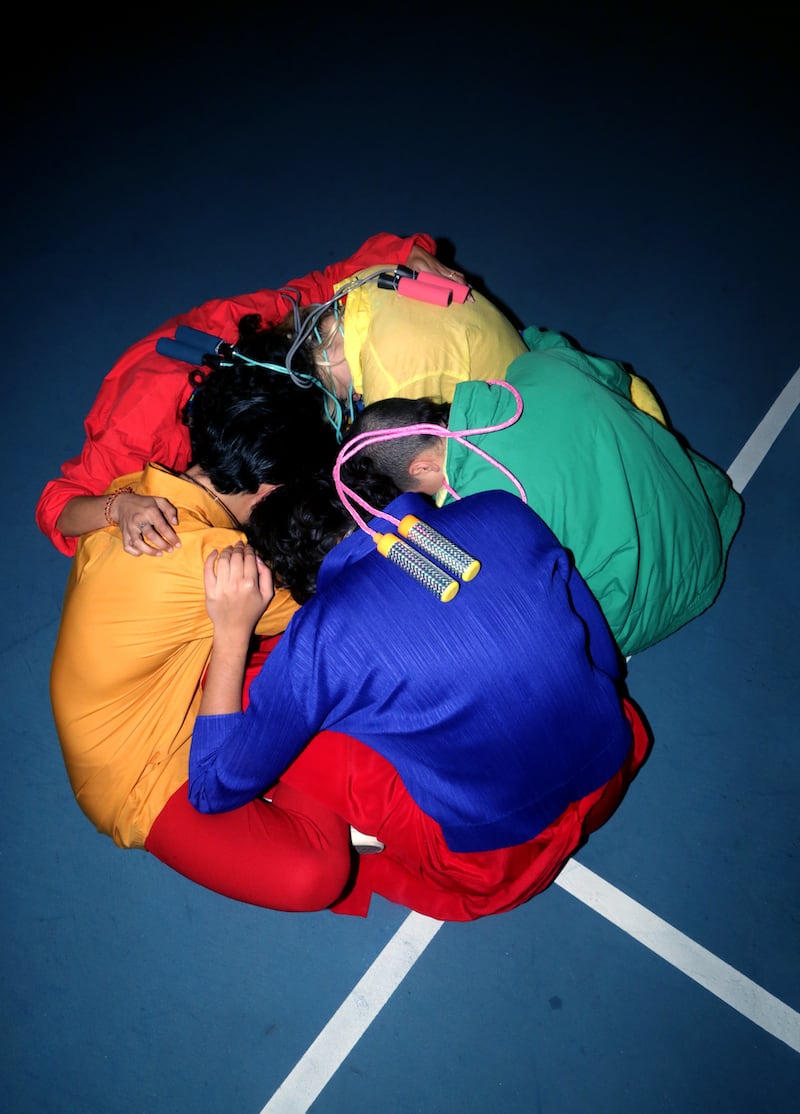 (adjective) Meaning ‘askew or awry; positioned diagonally; cater-cornered’; (adverb) ‘diagonally or obliquely’. Example: the choreography is catawampus to the stillness experienced in this pandemic.

(verb) A state in which one watches dust accumulate in the air through the light of the studio windows with both anxiety and anticipation of what could come next after lying down with one’s laptop for four hours, not moving, whilst doing a residency in a dance studio.

(adjective) The cornerstone of possibility.

(verb) Dithering; talking and dancing at the same time using spoken phrases such as ‘dah de dah’ or one word, e.g. ‘west’, repeatedly in a thrashing manner.

(noun) The complex hum, song or words sung to oneself out loud or whilst rehearsing to remember the actions one is doing. Example [to be read to the tune of cite radius]: ‘angle angle, expose leg to hiding touch to right cheek, elbow exposed to whip whip whip, on angle grind, out bright sign remember horses, Britney to Justin wear denim shake stomp stop bitch right turn left exit.’ 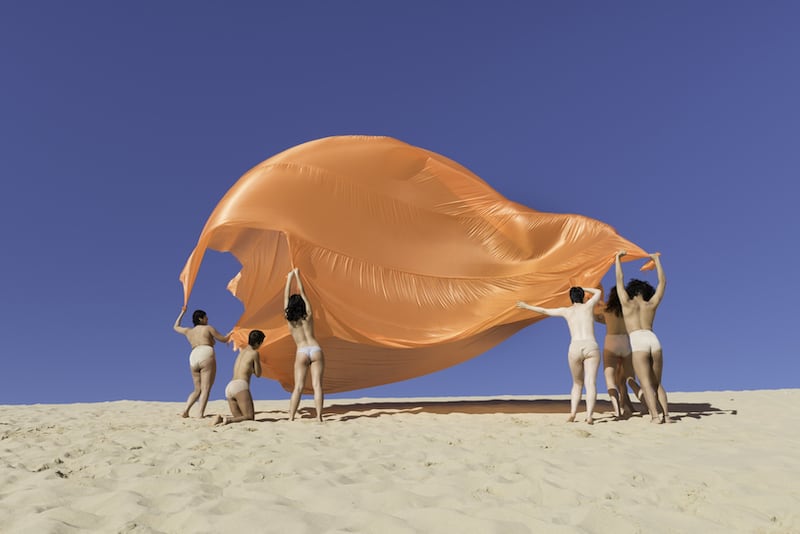 (noun) Dances or performances that are comforting yet uncanny. Example: performance for one; a helium balloon is attached to a string, the performer chews gum and inserts it into their belly button and attaches the floating balloon and string. 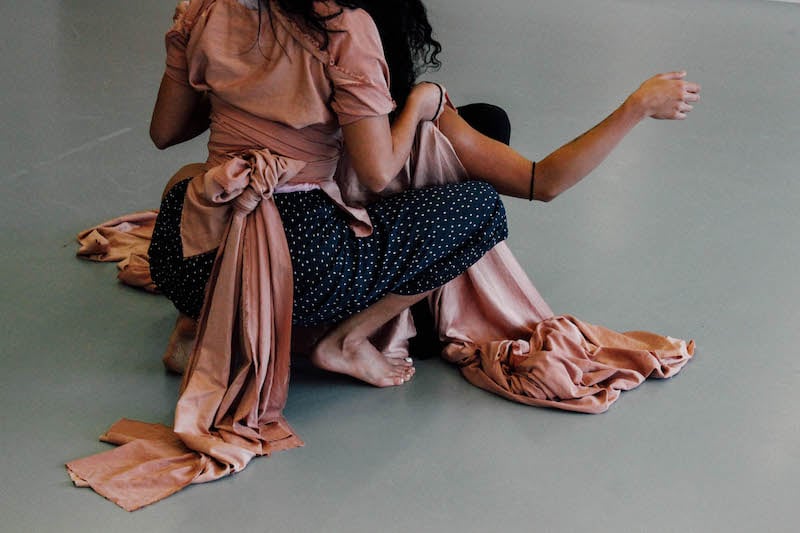 (noun) The task given by a choreographer or teacher who has run out of ideas and needs to occupy dancers with doing the movement in reverse to what was taught. A way of seeking time or rest to recalibrate.

(noun) A unilateral leg action in which the gesturing leg is circled along the floor whilst trying to hold onto the feeling that the human foot is the trotter of an animal.

(noun) Using the premise of the petit allegro (quick, lively jumps), but expanded, to let the feet find moments of slippage and confusion between the feet in space and the upper torso. Best to use the hands and arms to disorient.

(noun, adverb) An action of dancing that looks like sitting and flying simultaneously. Example: where one would seem to be sitting down on an invisible chair but also could be doing so whilst in a plane. Contradictory but still imagined and in motion.

(noun, verb) A vessel for the precious and personal; coming from te reo Māori language where waka is a boat or canoe and huia is a type of bird. Within this context, the word considers the cultural, performative and ceremonial body; it becomes a metaphorical vessel and activity of thinking about what is sacred and how to place it. It takes into account the movement of things and what remains.

Amrita Hepi (b. 1989, Townsville of Bundjulung/Ngapuhi territories) is an artist working with dance and choreography. In 2020 she is a Gertrude Contemporary artist in residence and is currently working with Kaldor projects/Serpentine UK. Amrita trained at NAISDA and Alvin Ailey NYC.