un Projects is based on the unceded sovereign land and waters of the Wurundjeri and Boon Wurrung people of the Kulin Nation; we pay our respects to their Elders, past, present and emerging.
un Projects
‹
un 14.2

In Conversation with Fiona Foley

by Elena Gomez and Rosie Isaac 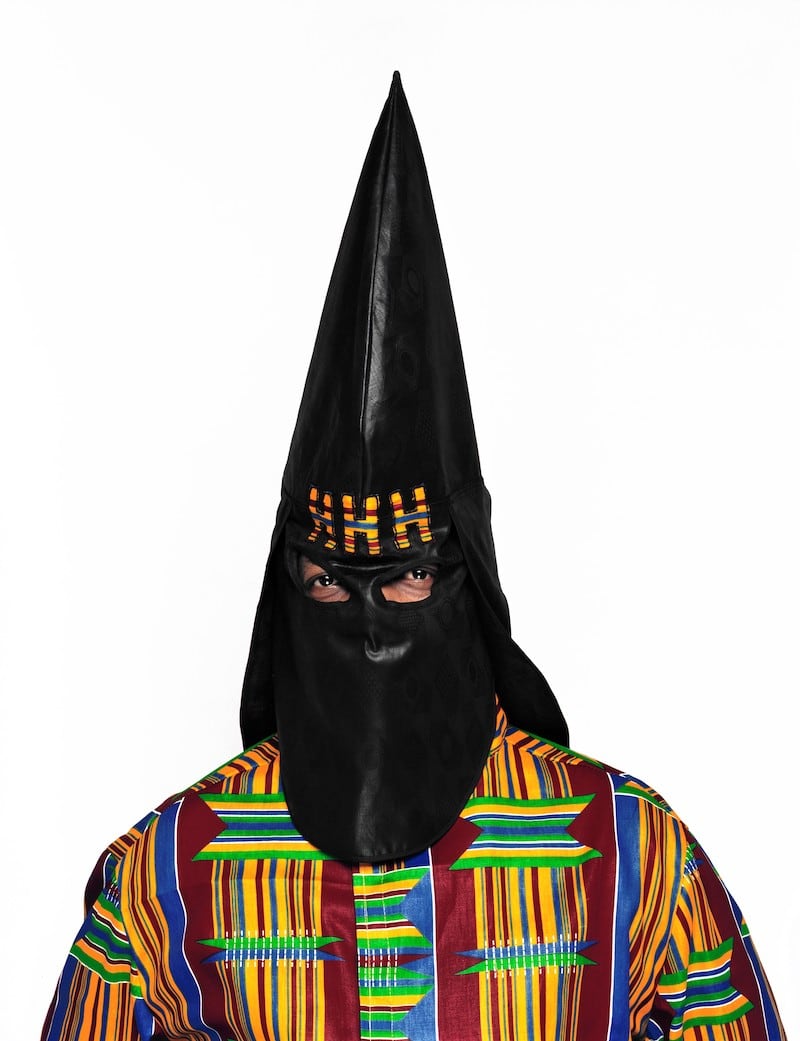 Could you tell us a bit about your country?

I was born on my Country, which is Maryborough. We have two tracks of land. We have six islands and one of those islands is Fraser Island, also known as K’gari — it’s the largest sand island in the world. On the mainland we have a north, west and south boundary, which you can see geographically in the landscape. To the west there’s Bauple Mountain, to the north is the mouth of the Burrum River and to the south there’s Tin Can Bay — Tin Can Bay, Double Island Point, it arcs around. We have sovereign nations to our north, west and south, Wakka Wakka [to the west], Gubbi Gubbi south and north Goreng Goreng. Which means we had to get on with people, because they would’ve been travelling through our country and we would’ve been travelling to their country.

In your new book Biting the Clouds, you write about different forms of knowledge-making. Through university systems in Western traditions and, by contrast, the relationality of Aboriginal knowledge systems — you cite Karen Martin’s Indigenous Research Theory. How do you see your art in this context of knowledge production, particularly through your own cultural and intergenerational experience?

I grew up very proud of being a Badtjala person, and that was impressed upon me by my mother. You grow up in a sort of dual system in Australia, where non-Indigenous people make you feel bad about being Aboriginal, so she was always there to encourage us to be proud of our culture. I think if you grow up with that backdrop, it means that you see the world in a different way. Instead of being ashamed of your culture, we grew up to be very proud. Then you start to ask questions about social injustice. When I was a young child of five, the burning question for me, and it has been for most of my life, was: why weren’t we, as Badtjala people, living on our traditional country? Which is Fraser Island.

We got taken off Fraser Island in 1904. When we were on the mainland at Hervey Bay or on the beach at Urangan, you could look across to the island and it was like a cultural deprivation. It was in our soul. So then I wanted to know what had happened between the races in Queensland for us to not be the traditional landowners for that country anymore. None of this is ever explained to you in a high school setting or a tertiary setting. We don’t talk about race relations in this country. That journey for me really started as a 24-year-old when I would pick up books and read. I’m self-taught about race relations in Australia, through reading historians’ work. And when I give public lectures about the history of opium in Queensland, most of the people in the audience are very unfamiliar with this history that I’m talking about. I have to take it very slowly, because the intricacies of how the Chinese were treated in Queensland, Europeans and Aboriginals, all weave into this collective story related to that piece of legislation, The Aboriginals Protection and Restriction of the Sale of Opium Act, 1897.

I wanted to know what opium had to do with Aboriginal people in that title, and so that was my search, to find out how opium impacted Aboriginal people. In Maryborough, in the main street, Adelaide Street, there were three opium dens and there were other clandestine locations around the city where people were smoking opium. There was another life at night, Europeans chasing Aboriginal women, which is another story again. I went on a search to understand the complexities of race relations, and I think I’ve come at it from an Aboriginal perspective as a Badtjala person — trying to unpack it as an Australian Aboriginal who has a background in the arts. I’ve worked with this topic for over ten years, and some of my work has the imagery of opium poppies in it, either sculpturally or in painting or film. Like the film I made last year called Out of the Sea-like Cloud (2019), there are references to people smoking opium. It’s been a wealth of knowledge, and I can use the arts as a platform to talk about this history.

Could you tell us about the bureaucratic process involved in your work Witnessing to Silence (2004)? Do you see the making of this work as an act of resistance?

The sculpture Witnessing to Silence was carefully orchestrated. I had to think very clearly about how I was going to outmanoeuvre the state (the commissioning body for the Brisbane Magistrates Court, where the sculpture is installed). How was I going to out manoeuvre 14 white men in suits every time we’d meet in the boardroom to talk about the commission? I knew that if I wanted to get this work up, I had to remain silent about the true meaning of the work, and that was a process of two years. I only told two people. One was a researcher, and I asked her to find all of the massacre sites that she could in the state of Queensland, and she found 94 on the public record. Those towns, those cattle stations, those rivers, creeks, islands, were engraved in the pavement outside the Brisbane Magistrates Court, along with two vertical elements — one representing ash as the metaphor for fire, and the other representing water with a misting device that would come on every 15 minutes. When massacres were carried out, they would have to dispose of the bodies. The system they invented nation-wide, particularly in the north, was to get rid of the bodies either by burning or dumping them in watercourses. So those two elements are really important.

There were many challenging moments through that whole process; it was not smooth sailing. But basically, I had a win. They acknowledged that the work was about massacres in Queensland and they had to change the label to talk about that. I couched the work in bushfires and floods and took them down a path that was not really relevant, but they bought it. Sometimes in life you have an opportunity, like a commission outside the magistrate’s court, where you have to speak your truth. You have to speak about a justice that has not occurred in this country. There are reparations that need to be made to Aboriginal sovereign nations in Australia for the killing of our people.

You ask in Biting the Clouds: ‘How do you represent a massacre site in the 21st century artistically? Do you re-enact the violence all over again, or do you portray that violence in another way?’ How have you approached this question through your art practice?

It was a question asked of me at a conference, and I thought about that. How do you portray violence without actually having to go there? You portray it through metaphor. You portray it through beauty. And you portray it poetically. I think my work engages in a type of beauty that lulls you in, a soft lulling, because it’s aesthetically beautiful. But then you come close to the work, and think, ‘Wow, this really does play on my emotions, and it’s much harder hitting than I first suspected.’ A classic example is the series HHH (2004), where I inverted the racism of the Klu Klux Klan into a supposed group called the ‘Hedonistic Honky Haters’, with all of the colours and the imagery reversed. Under the black hoods are African-American people, and the robes are a Dutch wax imported from Africa now but [which] used to be from Indonesia, of very representational African fabric and cloth. So it was just an inversion of beauty really, and then when you see the work it really is strong and confronting. And that work really plays with people’s emotions. But to lull them in of course is the beauty — coming up close and realising that behind each hood is a Black person. In another part of the book you write: ‘Before now, no artist has pieced together an overarching or in-depth analysis of The Aboriginals Protection and Restriction of the Sale of Opium Act, 1897.’ What kind of conversations can open up through art that might not be available through academia or journalism? The question I suppose is: what does art give us?

Art gives us a lot. Art is a barometer for society. [As artists] we’re a barometer for cultural change — if we look recently, there’ve been some big cultural shifts in 2020, tectonic plates have shifted across the globe. I’m talking about the death of George Floyd. Art does play a very important role in dismantling structures of racism [and] sexism. I think we can engage in this cultural counter movement and say: ‘This matters to me, I wanna make a difference,’ and it’s a change for good. You can do that through the arts. You can do that in film, songs, plays, books, and as a visual artist I feel I can make a real counter narrative through the art that I’m making. It’s a powerful way to exist in the world that you can’t do in academia, because you’re restricted by the confines of that particular institution, and if you step out of line, well, your contract may not be renewed. If you’re an artist, you can say whatever you like! I have an immense sense of freedom being an artist and working out ways of dismantling the system.

Fiona Foley is from the Wondunna clan of the Badtjala nation. Foley completed her fourth film titled Out of the Sea Like Cloud in 2019. Recent exhibitions include a 25-year photographic retrospective titled Who Are These Strangers and Where Are They Going? Dr Fiona Foley is currently a Lecturer at the Queensland College of Art, Griffith University. Her new book Biting the Clouds (2020) is published by the University of Queensland Press.