un Projects is based on the unceded sovereign land and waters of the Wurundjeri and Boon Wurrung people of the Kulin Nation; we pay our respects to their Elders, past, present and emerging.
un Projects
⥞
un 11.2

The joke that isn’t funny anymore

Experimental music desperately needs a turn to humour, satire, parody and, most of all, reflexivity, if it is to remain listenable. I can almost see this turn taking shape in the form of a long and unfolding joke. But, like any joke, the punchline can only work if you’re alive to the setup. I propose that the setup has been taking place over decades of concerts marked by near humourlessness. At these concerts, audiences have heard the ‘genres’ of experimental music ossify and settle before their ears, in atmospheres administered by consummate and authoritative musicians, largely dead to laughter. The uptight, formal and strangely anti-social settings are leveraged to produce reverence for these performers, while reinforcing a type of audience passivity. Experimental music’s anti-social tendencies play out in myriad ways: the fixation on materiality that figures the sonic as ‘fact’ — objet sonore made of frequencies, pitches, textures — rather than as slippery communicative medium; the identification of sound with power and control, wielded by performers over silenced, compliant audiences; the assertion of an ethic of ‘playing together’ even where the result — a scoreless draw — is already predetermined. These various dispositions, blended together over many years, have produced scenes and styles that, structurally, cannot be funny. Pervasive soberness and an inherent incapacity to laugh-at-itself: these have produced conditions that make necessary a comedic turn in experimental music. Or, another theory: experimental music has always been hilarious, but conditions were unsuitable to sense the humour. An emergent experimental sensibility will have a retrospective effect, rendering all previous examples comic.

What has made this music so incorrigibly grave? To begin to answer we should survey some prevalent modalities and practices. In reductionist or ‘lowercase’ electro-acoustic musics, the palette is strictly austere, sparse, tightly controlled, and comprised of sounds, which make claim to refer to nothing but themselves, emerging fact-free of context or function. Here, sounds are assigned material or physical, rather than social, promise: they may be experienced and aesthetically assessed by the individual listener, but not shared or communicated meaningfully as dialogue. Under this rubric, the sound’s sociality recedes from view in a field of fog and static. The demand of extreme concentration and overarching stillness then works to literally mute the audience. This is doctrinal; an audience must produce less volume than the music to which it attends. So, operating at the very threshold of audibility, ultra-quiet music polices its listener, demanding total inaudibility of its audience as a given, automatically required by etiquette. Let’s remember that John Cage’s ‘silence’ was, at least in part, an invocation for listener to usurp composer, to turn away from the stage, and explore new forms of agency over sound and listening. It was a disruptive invitation. But this legacy has turned against itself, and so much contemporary ‘Cageian’ music works to reinscribe the authority of the composer rather than undermine it. 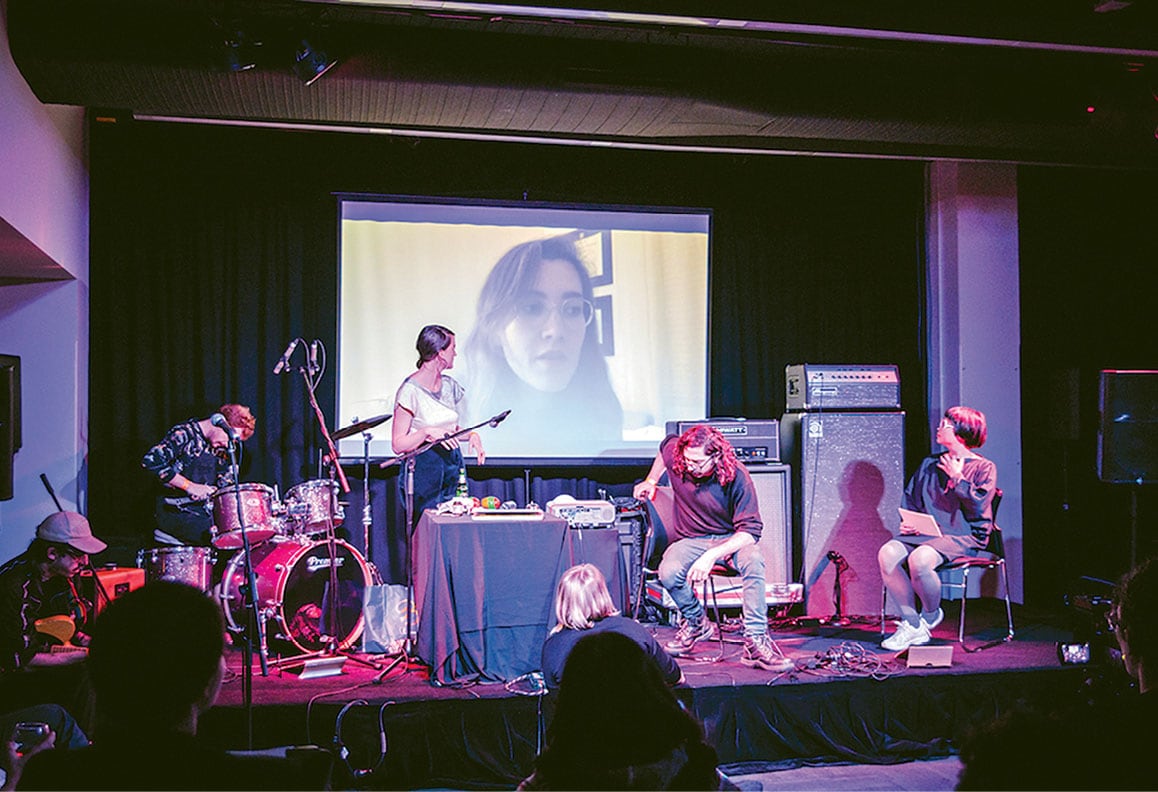 Of course, it is possible to laugh inaudibly. Disclosure: I have found extremely minimal music frequently funny over many years, encompassing my participation in and production of it. In 2003, Japanese über minimalist Taku Sugimoto sat hunched over his instrument at Footscray Community Arts Centre in one of a series of events organised by Caleb Kelly (whose 2009 book Cracked Media is symptomatic of the materialist tendency). Sugimoto’s set consisted of single plucked notes on a detuned acoustic guitar, interspersed by gaps of up to ten minutes, and stretched over an hour-long duration. Repressed atmosphere, uncomfortable seats. For me, though, another feeling was growing. Each pluck an episode in a progressively more curious joke. The sound of the guitar, so radically unrewarding, became the punctuation of a text, a hilariously empty set-up towards a nihilistic punchline. For this situation to work is utterly reliant on the compliance and assent of everyone involved: performers, curators, audience. An ecology of agreeance both striking and humbling, ridiculous and absurd, must pre-exist the work. An interior cackle built inside me, accumulating intensity over the hour. But it was never outwardly expressed, and I’ve held that cackle inside for fourteen years.

Unpleasure is another bulwark to laughter. The logic of unpleasure is epitomised in various punishing noise musics that fetishise the pain and discomfort of harsh exposure (extreme volumes, frequencies, durations), and which propose an ethic of endurance — where the capacity to obdurately weather discomfort is elevated to the level of virtue. Connoisseurship is measured in a listener’s ability to savour the abject, and perform the necessary conceptual flip, which reconfigures it as beauty. This dialectic in noise music means that the more expansive and unlimited the negative horizon, the greater the space for recuperation and pleasure. In other words, the worse, the better. I have sympathy for this counter-intuitive and perverse logic of aesthetic unpleasure. But concomitant to it is an historic over-identification of noise with physical strength, violence, force and subjugation, and, generally, masculinist power — a patriarchal expression that many feminist and queer noise artists have identified and consciously sought to embody, subvert, and overturn. As with the extreme reductionism of Cageian-type music described earlier, maximalist noise silences the listener but does so through oppressive volume rather than repressive shushing. Noise is a power game where the role of the pieces can flip. The audience is forcefully exposed to noise, but also identifies with the noise, embodying, all at once, victim, weapon, and blow. The force of noise inheres in the performer and listener. Either way, though, a dynamic of overpowering and domination prevails, in an atmosphere anathema to comedy.

If force isn’t funny, we should remember that cooperation can also drag. This is epitomised by much contemporary free improvisation that follows the ‘non-idiomatic’ or ‘total’ improv models influenced by (genuinely visionary) 1960s avant-garde European groups like AMM and MEV. Here, the qualities of freedom (to make any sound you want), individuality (signified by your distinctive palette), and tolerance (for sounds by others which you find disagreeable) commingle to operate as an abstract scratch model for a utopian form of civility. Free improvisation as a model for a free and civil society. This is an ideal that puts musicians to work diligently and sensitively towards the co-production of shared sound-worlds, where independent elements weave together in polyvocal conversation. The non-hierarchical structures (where no sound dominates another) are to be understood socially as forms of relation — constantly re-calibrating, endlessly versatile. We can’t properly oppose co-operation or doubt collective experimentation, but we have to ask: at what moment does the repetition of improvisational experiments from the 1960s become staid and formulaic? How much of what we hear today as free improvisation is really the generic reproduction of long established freedom-tropes? What is pitched as radical cooperation might in fact just be the dramatisation of already-arrived-at consensus. Anti-hierarchical improvisation as the symbolic performance of tolerance without stakes. To automatically hear improvisation as politically and socially transformative is to confuse dogma for truth. In the absence of tension or space for even the possibility of disagreement, consensus improv finds itself floundering very far to the arid side of dry.

Breaking Up is Hard To Do

To break this funk first requires diagnosis, then subversion of the performative acts, behaviours, and gestures that now dominate experimental music. Truly experimental music should be performed against itself. The Band Presents is a new-ish Melbourne ensemble comprising of Eric Demetriou, Makiko Yamamoto, Camila Galaz, Sam George, Kalinda Vary and Travis John, whose recent performances evidence a suitability for this task. As the name suggests, they are both a band (a group that performs, if not music, then at least something in proximity to music), and also a presenter (an entity standing side-of-stage offering up the work of another).

This nominative confusion is integral and apt, as the band primarily presents their own work: The Band Presents … The Band Presents. The doubling effect means The Band Presents is both always off-and-on-stage, watching themselves perform, and creating space to disagree with themselves. Fittingly, in their first gig The Band Presents began by breaking up. Demetriou, the self-appointed bandleader, is coaxed with great effort and persistence to the stage by Yamamoto. Prior to this we have heard him, via wireless microphone somewhere backstage, vomiting from nervousness. Demetriou and Yamamoto finally arrive on stage to find the other members positioned around instruments, ambivalent, passive, and largely uncooperative. Ignoring them, Demetriou and Yamamoto perform a stilted, absurd interview marked by issues of intelligibility, pronunciation, and misunderstanding. This is a recurring motif for Yamamoto, a native Japanese speaker whose earlier work, Oh Really, consists simply of the artist’s repeated and frustratingly unsuccessful attempts to pronounce the words in question.

In this first The Band Presents interview, Demetriou claims that everything happening — the conversation, the listless musical noodling in the background, the audience’s response — is, in fact, his work, and his work alone. Demetriou argues each progressive moment, or section of proceedings, as constituting ‘songs’ authored by him. As he has said elsewhere, the band is necessary insofar as it requires many people to perform ‘his’ work. Unable to reconcile this display of absurd egoism, the band breaks up (via a fractious Skype session with The Band Presents bassist Camila Galaz in Los Angeles (she always appears via Skype, even when in Melbourne, out of preference for the specific audio fidelity) and a dissonant karaoke rendition of ‘Total Eclipse of the Heart’, led by Kalinda Vary). All the while at front of stage, Sam George transcribes events in a real-time Google document, offering yet another inside-outside perspective. In breaking up as an opening move, The Band Presents lays the ground for a narrative staged in reverse. The group has begun at its end in a state of toxic dissolution, with members in conflict, disarray, tension, and jealousy. The Band Presents may then progress naturally into the naivety, hope and potential of its early days, building towards the group’s joyful formation, and subsequent non-existence. Or alternatively, The Band Presents may continually stage and restage their implosion (a recurring motif in Demetriou’s sculptural works with imploding oil drums) at each show, a band always breaking-up — as a methodology for going on.

The sensibility of The Band Presents is, if not outright funny, then pervasively awkward in the sense given by writer Adam Kotsko, for whom awkwardness is the feeling of unease produced by the violation or lack of commonly understood social expectations. Awkwardness cannot be a quality of individuals, but only a kind of social dissonance, or out of sync-ness, generated between people in relation to a particular context. The Band Presents unmakes experimental music by making it awkward in/to its particular context. They give no legible demonstration of instrumental prowess, yet incorporate instruments expertly as conceptual props. The fundamental unmusicality, or not-yet-musical quality, of the band is classically experimental in ethos, yet still jars with all expectations. The shows are informal and chaotic, with a dynamic so open and porous that audience intervention bleeds easily into the work. Instead of power and control, sound here is identified with fragility and chaos. Onstage, the band generously mocks itself, and this lack of authority frees the audience to also listen experimentally, to hear and share the strange social dynamics of the work. An experimental band is a way to process disagreement, in a space of honest mishearing and misunderstanding. Instead of ‘playing together’, the band breaks up, and also helps experimental music to break out of what felt like a terminal impasse.

Joel Stern is Artistic Director of Liquid Architecture, a PhD candidate in Curatorial Practice at Monash University and plays foot pumps in the band Sky Needle.