un Projects is based on the unceded sovereign land and waters of the Wurundjeri and Boon Wurrung people of the Kulin Nation; we pay our respects to their Elders, past, present and emerging.
un Projects
ᗕ
un 9.1 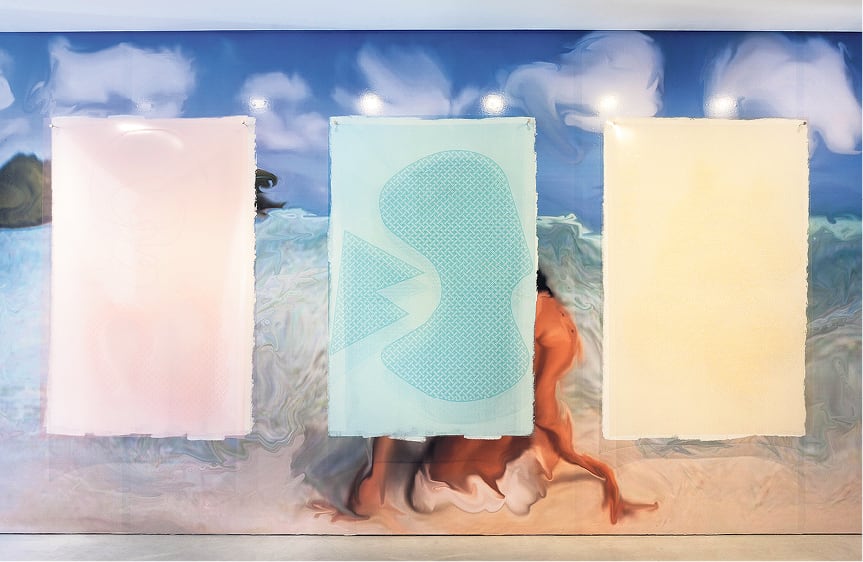 ‘Google has created a monopoly in which every click produces value for the company. The next stage will be the conquest and appropriation of the ever-more-scarce non-clicks and user downtime as a value asset.’1

What you are about to undertake is a special type of guided meditation to help explore the issues you’ve been facing. Start by focusing on your breathing. Breathe in good, clean, positive air and exhale all the tension in your toes, legs, hips, chest and shoulders. Concentrate on the feeling of your contracted muscles falling limp, on the feeling of knots unknotting. Do this for a few minutes until your respiration again returns to being a mindless reflex and the sound of your breathing has disappeared behind the scattered foliage of your drifting thoughts. The on and off switching of your heart has now slowed to a resting pace and the adrenaline levels in your blood have dropped off significantly. You are relaxed and about to enter a trance. We can see that this is so from your biometric information in the live feed.

You are not entirely sure why you came to us. You cited general anxiety, but found yourself unable to entirely put your finger on the source. This is common. Let’s start by defining the problem; we’ll guide you through a few thoughts and feelings which you can explore while you are under. As you are an artist of sorts, within this meditation we will place you somewhere that is familiar. Imagine you are in a gallery space; a white-walled, concrete-floored, well-lit void. Our thought experiment will happen here. You are at an exhibition…

An overladen taco with a padlock passing through its shell. A car tyre wrapped in a Chinese takeaway restaurant calendar. A double-ended bottle of Perrier. He was struck by how much these particular images reminded him of his work as a freelancer developing innovative and often conceptual products for large companies. It wasn’t so much the novelty of the forms and ideas but more so that, like these works, the products he developed only ever existed as Photoshops and 3D renders, and had never actually been put into physical production. Truth be told, he was a vapourware developer, a fact which he had to be discrete about given that what he produced was in flagrant violation of competition laws in most developed countries.

The way deals were made was comically surreptitious. He would meet a company representative in any number of clichéd spy-movie locations: in an airport lounge or midway across a bridge with a nice view of a river or on an idyllic, winding walk through a city park. Usually the company was being reactive to a competitor who had just announced a new, superior product offering to be released in the near future. In cases such as this, the contracting company needed to meet this announcement with one of their own so that consumers wouldn’t abandon their brand for another. They needed to promise more; a better breakthrough, a next generation or a more advanced evolution. This scenario was usually the case, but in business—much like in contemporary politics, which also requires the aggregated movement of hearts and minds—there were many reasons for smoke and mirrors. It was like…there is a word for it…well, it was like something, an idea on the tip of his tongue he couldn’t quite spit out.

…As you slip deeper into trance you are probably having many small thoughts, either loosely related or completely non-linear. This may confuse you but it is completely normal and it’s okay to let them naturally run their course…

It was funny how easily these auto-meditation programs could subtly guide you to just where you were looking to go, how they knew this instinctively. ‘Non-linear’! That was exactly the word he was after. It was Vladislav Surkov, architect of the Russian ‘guided democracy’ system, who he had first heard using the phrase to describe a means of political control that succeeded by keeping opposition constantly confused. Red herrings could become truth, sticks could become olive branches and nations could be friends, enemies, or both simultaneously, depending on the circumstances. Every policy, cross-promotional colab and political image is as mutable as soft, wet clay. He considered himself part of this circulation of misinformation. He produced vague elementary design concepts, a series of exciting and intriguing concept sketches or videos, and then released them through secondary channels, as supposed leaks or insider information, so that the concepts would then proliferate, self-propelled almost, through social media. He was an innovator of form and concept in a way, and he had done well from this trade. However, in moments when he was more honest with himself, it made him feel guilty. Is that why the auto-meditation system was guiding him down this channel of thought, so he could acknowledge this feeling?

…Consider how you feel as you walk through the space, passing from artwork to artwork. Stop here at this work. I can see from your user cache you have viewed it many times and you have flagged it as a favourite of yours. Spend some time with it. How does it make you feel…?

He knew the system was introducing his mind to a Zen kōan. The auto-meditation program was the only place that he chose to disable his Fitbit and now the system, knowing this, was asking him to reflect on his feelings when he didn’t have access to his biometric data or coaching insights. He was used to being told exactly how he felt. Under normal circumstance his Fitbit would take his data, everything from his heart rate to his biochemistry, and cross-reference this with contextual information from his social media feeds, geolocation and environmental sensors. In a regular exhibition setting the Fitbit would automatically trace the emotional trajectory of his experience and update it to the GlobalMood cloud where he could compare his experience with others. And while he could read his precise emotional state as a text description, there were also filters available to describe these emotions as informatics or as abstract compositions and even as musical rhythms and melodies.

Usually, he knew precisely how he felt, but now a great doubt was introduced that forced him to give pause.

…Although it seems primitive now, there was a time where—at least temporarily—it was possible for oneself to not produce data. Now we are producing data constantly, streaming from ourselves like sweat through pores in the skin…

He was well aware of this. GlobalMood was one of the main metrics he used in his design work. Given the importance of his products making an impact and circulating through the social networks of users, he often thought he was really in the business of giving form to emotional expression. He approached his design process with the mindset of making a product express a complex emotional dialogue with the target market segment. His products didn’t just reflect a zeitgeist, they were empathetic. In fact he found it hard to imagine a time before GlobalMood. Today matching emotion to form was an automated just-in-time process. Is this what he was anxious about: becoming obsolete?

…Walk over to that image of the beach. You are now inside that image, the waves lap at the shore but it is otherwise quiet. You are very relaxed and sitting next to Jennifer Knoll, both of you looking out onto the turquoise sea…

The auto-meditation program knew that after watching a Constant Dullaart lecture online, a small part of him had adopted Dullaart’s private fantasy. To sit on the beach with the soon-to-be-wife of the inventor of Photoshop and ask her what it was like to be a part of the world’s first Photoshopped image. Sitting on the beach with her now he felt himself finally lulled into a relaxed state. Both looking off to the left, they could see tourists on the distant end of the bay. Young Eastern European backpackers were blaring a Soundcloud feed from a Bluetooth speaker whilst being glared at by newlyweds and family vacationers. However, on this stretch, away from the cabanas, they were alone.

Ceding to the suggestion he closed his eyes. As his mind drifted towards sleep he imagined the ocean just beyond the edge of the visible horizon tumbling off the edge of a square planet.

… Lie down on the beach now and bring yourself back to your breathing. Now imagine as you exhale nothing leaves your body. No air, no information. Imagine your heart slowing until it rests absolutely. Imagine being held in this stasis for a split second.

Andrew Varano is an artist and curator from Perth.

1. Emmett Byrne, ‘Metahaven: Products of our Imagination’, Task Newsletter #2, 2009, p. 112.
🠖
The Form That Accommodates The Mess, OtherFilm and Institute of Modern Art, 30 October 2014
Tara Heffernan
⇜
When I write I know that I am drawing
Lauren Burrow
Filed under Article Andrew Varano Constant Dullaart
Advertisement
Advertise with un