un Projects is based on the unceded sovereign land and waters of the Wurundjeri and Boon Wurrung people of the Kulin Nation; we pay our respects to their Elders, past, present and emerging.
un Projects
«
un 10.2

Art holds a high place in my life / Damp: study of an artist at 21

Amidst the otherwise rather austere mise-en-scène of a winter’s day at the Monash Art Design and Architecture (MADA) campus, the resplendent blue structure that is Gormenghast proves easy to find. Standing more than five metres tall, with a ground area of almost thirty square metres, the two-level wooden frame takes pride of place in the Ian Potter Sculpture Court, located directly outside of Monash University Museum of Art (MUMA). The eye-catching colour is temporary — the result of a primer that may soon be painted over in the spirit of the constantly evolving and multi-dimensional project. The form itself may also change, with various structural modifications to be made during the remainder of its five-month residency on campus, where it is the key site for Art holds a high place in my life | Damp: study of an artist at 21, a program of exhibitions and events curated by Rosemary Forde, a PhD candidate in Curatorial Practice at MADA. 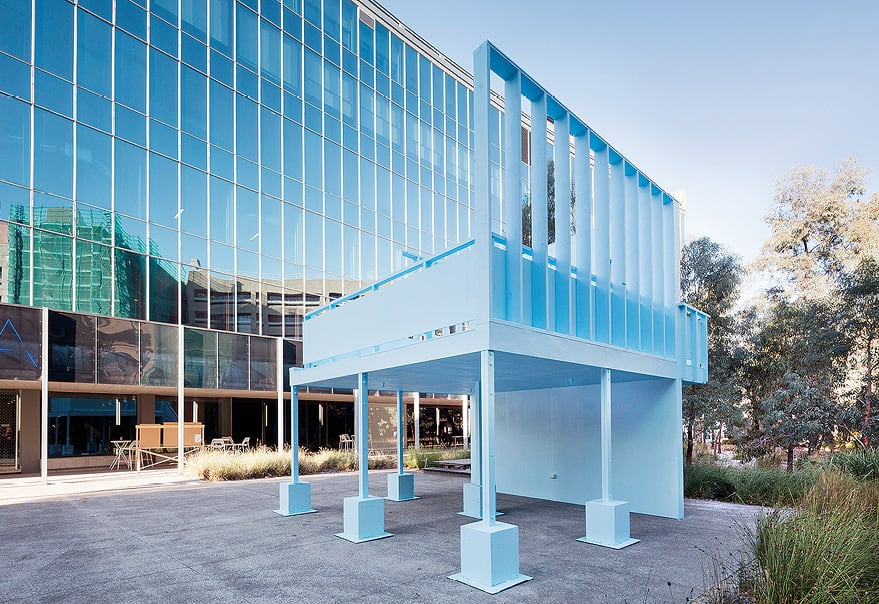 The program revolves around the work of Melbourne art collective Damp, who formed in 1995, making 2016 their 21st year. The collective was formed by students at the Victorian College of the Arts in a class taught by Geoff Lowe, of long running collaborative project A Constructed World. For Gormenghast, Damp collaborated with Monash Art Projects (MAP), a MADA-based ‘interdisciplinary team specialising in art in the public sphere’.1 Artist and Head of Fine Art Callum Morton worked with architects Andre Bonnice and Nicholas Agius to create a structure according to Forde’s open brief for a ‘temporary room that could be added to’.2 This sense of being in flux and open to change is consistent with the way that Damp operates — it has had more than seventy members during its twenty-one years. Today Damp is made up of just four people: Narelle Desmond, Sharon Goodwin, Deb Kunda, and James Lynch. The programming for Art holds a high place in my life will be a collaborative exercise between these current members, as well as current students and recent graduates of MADA. Melbourne-based artist and MADA lecturer Nicholas Mangan will also utilise Gormenghast as a site for the installation of solar panels, which will power a work in his upcoming survey exhibition at MUMA. Having begun as a pedagogical experiment within an art school, it seems fitting that Damp should return to the institution now. To resituate Damp’s practice back within the walls of the institution, at MADA, is to make an intergenerational comparison between then and now; us and them. The cleverness of the program’s title is that it speaks not only to the age of the collective itself, but also to the average age of the student body at MADA, and the age that many of Damp’s members would have been when the collective formed. 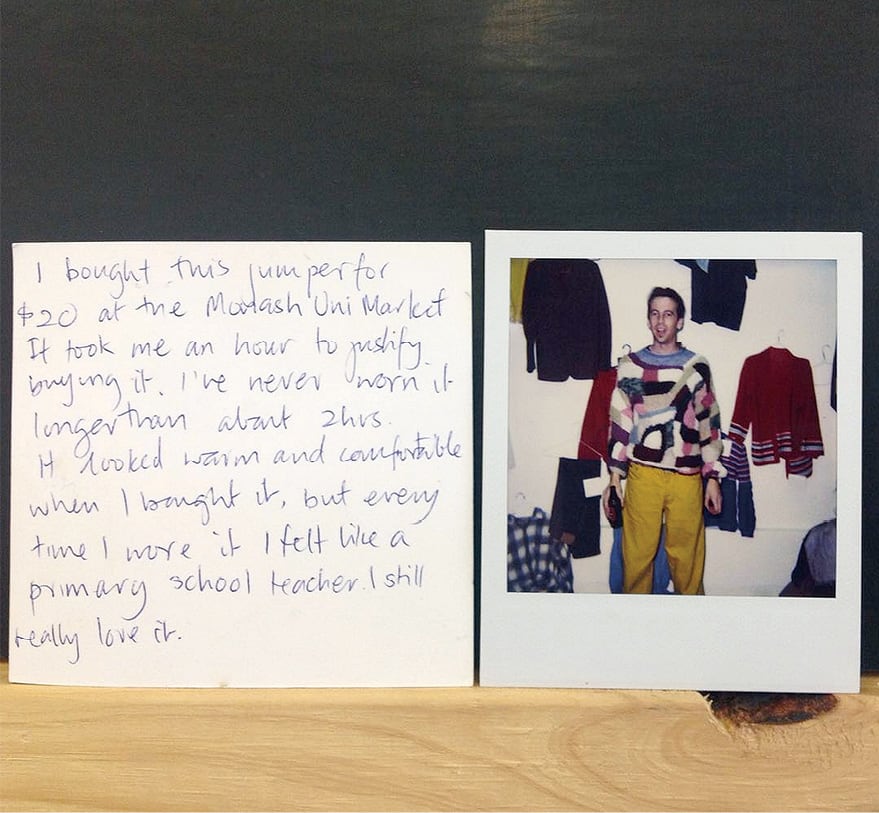 In an article entitled ‘Art holds a high place in my life’, artist and writer Andrew McQualter reviewed Clothing Exchange, an event that Damp held at Grey Area Art Space in May 1997. The event advertised free clothing in exchange for a photograph of the item being worn.3 As McQualter writes:

Recently we’ve seen a lot of this kind of thing in art galleries: drag in some clothing, a few snapshots, maybe a home video, and call it art. ‘The everyday’ has become critical and theoretical currency, it’s been commodified (twice).^4

This ‘twice’ seems to refer to Duchamp and the first instance of the everyday in a high art context. Nearly twenty years on, and the co-option of ‘mess’ and the everyday into critical practice is back with a vengeance — think Lou Hubbard, Alex Vivian and Centre for Style, among many others working locally and internationally at the moment. Whilst in 1997, McQualter seemed critical of Damp’s use of everyday materials, in retrospect it seems that these artists were ahead of their time. This approach to art-making, particularly in this case with the focus on ‘exchange’, does make currency out of non-financial means, presenting a welcome counterpoint to high-budget processes of production which demand pre-existing capital and therefore exclude the majority of early-career artists. This drive to make art more accessible, not only for the artists but also for the audience, is consistent with many projects from Damp’s back catalogue. Melbourne artist-run initiative Artmeet share this interest. Having formed in 2014 by students at MADA, with an often changing group of members and an interest in being transient, the parallels between Artmeet and Damp are quite striking. For this reason, Forde has invited Artmeet to collaborate with Damp and MAP during the second semester of Art holds a high place in my life. Artmeet will present a solo exhibition of Sanja Devic, a 2015 MADA graduate, at Gormenghast. The structure will also play host to a schedule of performance based pieces for the duration of the exhibition. At the same time, an exhibition of Damp’s video work will take place in MADA’s Faculty Gallery. Later in the program, a Damp study group, made up of current MADA students who have been working with Forde, will curate an exhibition around concepts of desire. In terms of the evolving nature of the project, both architecturally and in a curatorial sense, Art holds a high place in my life is less a retrospective and more a space for the consideration of collectivity in artistic practice at the present moment. Despite the spirit of change that Damp embraces, so much appears to have remained the same two decades on — not least, the need to form communities of practitioners in order to create networks of support in an industry that is unpredictable at the best of times. Damp is an apt focus for the context of MADA — not only in terms of its institutional beginnings and the still-relevant content of its body of work, but also in the sense that the collective serves as a model for life after art school, which offers an alternative to the convention of gallery representation.

Georgia Robenstone is an artist and writer based in Melbourne.