un Projects is based on the unceded sovereign land and waters of the Wurundjeri and Boon Wurrung people of the Kulin Nation; we pay our respects to their Elders, past, present and emerging.
un Projects
↚
un 10.2 Cluck cluck. Gack gack. Cluckety gack gack cluck. What are those sounds? Is that some Austro-Bavarian and Anglophone chickens hanging out together? There they go, wandering around the coop pecking at feed. But what is that they circulate around? What are they looking at? Is that some corn cobs preserved in a giant plastic drum? And what is that miniature seesaw? Is this a farm or a playground? And why is that monochrome orange particle board installed at one end of the coop as if in a gallery? And the man confined in a cage, is he an escape artist preparing for his final act? What kind of a scene is this? From whence comes this trans-lingual babble of chickens? Hard on the Heels of… is a recent curatorial project by Ludwig Kittinger and Melbourne artist Oscar Perry, held in Perry’s chicken coop outside of Daylesford, in regional Victoria — a space Perry has dubbed ‘Coq au Vin’ in a reference to the traditional French dish of the same name. Perry is primarily an artist who makes big, messy, mostly abstract paintings and playful sculptures redolent of early, less monumental Claes Oldenburg work. While showing at EXPO Chicago 2014, Perry met Kittinger, an artist and lecturer in the department of Skulptur und Raum from the University of Applied Arts in Vienna. After the event, suffering the postdiluvian malaise that inevitably follows a circus of that size, the pair soon hatched a plan to put on a very different transnational art show, which was realised earlier this year. Twelve students from the University of Applied Arts, Vienna, emailed instructions for the fabrication and presentation of their works to Perry, including schematic diagrams and precise specifications as to the materials and dimensions of the works. Perry then assembled the works in situ in the chook shed, where they were shown simultaneously with a presentation of complementary works by the same artists at the Viennese institution. As part of the project Perry also engaged in a number of video call dialogues with the class both before and after the show. ‘FOR THE CHICKEN = AGAINST THE CHICKEN.’1 The art world has been a major economic beneficiary of globalisation. The reduction of the costs of communication and transportation, coupled with the attenuation of barriers to the flows of goods, services, capital, and technology has drastically expanded the art market. Economist Joseph Stiglitz, when noting the devastating effects of globalisation, condemns how it has been bent to ‘fit with the interests or beliefs of the people in power’.2 The global art market is no different, opaque in its procedures and shady in its transactions, with the profits largely accruing to a small coterie of elite galleries and artists. For such institutions and artists, globalisation is conceived and understood as an economic, and not an aesthetic, discourse. Cluck cluck indeed. There is no golden egg in Perry’s chook shed. No patrons, no buyers and no viewers or, more accurately, none of the human variety. Here, it is chickens rather than capital that circulates. Perry’s curatorial enterprise, through utilising and repurposing the same channels as the global art market, strives to distance itself from the economic logic that has come to define globalisation. For Stiglitz, globalisation has been coopted by politics and ideology, and a reparative return to dispassionate economic analysis is what is required. Perry’s project, on the other hand, implies that what is called for is a shift into the realm of the aesthetic, toward an ethic of artistic collaboration. This is not the pseudo-aesthetic of global art networks, where economics masquerades as aesthetics, but rather an aesthetic practice that privileges failure over economic efficiency. 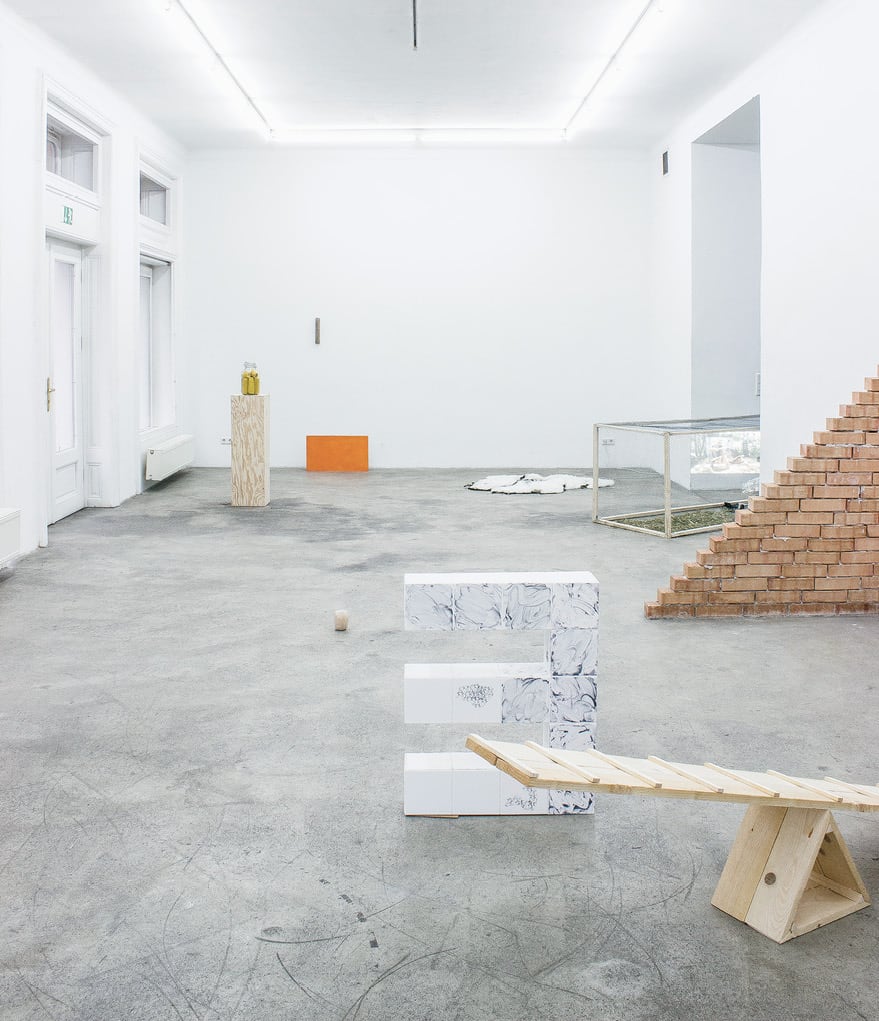 It is a common critique of globalisation that, contrary to its stated aims, it has compounded economic inequality, sundered the bonds of geographic communities and exacerbated feelings of individual alienation. Hard on the Heels of… plays with these tropes and more: that of the artist in isolation, the false promise of enhanced communication technologies, the paradox of net global food surplus at the same time as localised global food shortages, and the mass production of animals for slaughter and live export. Yet, in the end, the exhibition is neither sincere nor pessimistic enough to be reduced to such a critique. Instead, the works bask in the inevitability of their own failure according to globalisation’s economic metrics. With the artwork not advertised for sale and ultimately destroyed by weather and covered in chicken poo, the show places failure at the very heart of its logic — failure not as the binary opposite of success but as the very condition of its possibility. That some of the artists who Perry exhibited were unhappy about the final presentation of their work in a country Australian chook shed testifies to both the economic desires that subtend the art market and to globalisation’s unequal distribution. Yet this imperfect transferral of information may also be an optimistic gesture towards the vestiges of local identities and understandings that have not yet been effaced by the creation of a homogenous global community. Through showing the limitations of economic globalisation, Perry is not cannibalistically turning the forces of globalisation back on itself. Rather than a negation, it is a return to globalisation’s early utopian promise, when it was seen as having the potential, in Stiglitz’s words, ‘to enrich everyone in the world’.3 While Stiglitz privileges the economic dimension of ‘enrich’, the term also connotes the enhancement of one’s quality of life through cultural and artistic experiences. Hard on the Heels of… can be seen as an effort to foster a community in the name of a common aesthetic method of economically disinterested collaboration. In this attempt to reinvigorate globalisation outside of economic subjection, the technological conduits of globalisation become the binding agents for new artistic communities and exchanges. When the pre-eminent members of Perry’s utopian community are the chickens, what type of community is being fostered? A gallery of spectators clucking senselessly as they bob in circles around the enclosure, pausing only to peck at feed provided by the invisible hand of an omnipotent overseer? To be sure, the chickens serve as a not-too-subtle Orwellian dig at us, the market of art appreciators stuck in the myopic paradigm of the private gallery show. But the chicken is also a redemptive figure. With eyes on the side of their heads and tetra-chromatic vision, that allows them to see a superior colour spectrum to that which we see, they encounter the art on a distinct and sharper plane of perception. As such, in Hard on the Heels of… the chickens analogically represent Perry’s expression of globalisation: they are both a critique and a model, local failure rehatched as global success. Gak gak b’gawk.

Matthew Taft is a PhD student in the English department at Duke University, North Carolina. Julian R Murphy is a lawyer currently living in Melbourne.