un Projects is based on the unceded sovereign land and waters of the Wurundjeri and Boon Wurrung people of the Kulin Nation; we pay our respects to their Elders, past, present and emerging.
un Projects
⇽
un 4.2

Do we sense patterns or impose them? Is it a compulsive human function to make order out of chaos?

I have found myself creating a pattern. I’d note a thread of a concept, technique or reference that seemed to connect the works of Sean Bailey, with the installations of Nathan Gray — the colours, the hint of pagan evocation. The object manipulations and collages of Alex Vivian also seemed to fit, as did the explosive colour-drenched, 1980s-referenced work of the Paper Rad -collective. As did the underground comics of Simon James and the messy, vibrant works of Grant Gronewald (Cougar Flashy) and his cohorts, that featured in the recent Home Studies Flunkies show at Six_a ARI in Hobart. I’d peruse the French-originating Nazi Knife anthologies of images and see another variant — something creepy, dream-like, composed of characteristic palettes of reconfigured images and mediums. There was something about the creative method as well — a kind of looseness. Everything seemed to be Outsider Art in some way, even the things that are not, but most vital was the sense of wonder and dreamed reality exploding into an awake world.

Maybe it was just me making patterns in my head, compulsively; discovering Amelia Douglas’ discussion of Psychotropicalism seemed to parallel my thinking, but not quite. It is a manifesto and I was searching for a genre. It was heartening though, to know that I wasn’t seeing things that were not there. The next stumble helped me more.

In ‘Childhood’s End’, music writer David Keenan claimed that there was a new musical subset: ‘Hypnagogic Pop’. A bold claim, it was contested in the world of music criticism, but the declaration of a new grouping is always controversial — particularly to the people suddenly lumped together. Movements and genres are things to be regarded with healthy skepticism in this age of target-markets, but here Keenan seemed to hit on something useful that extends beyond the sphere of music. The elements Keenan used to manifest a genre provided a way of connecting a broad group of visual artists that somehow seemed to overlap and connect in both idea and form. According to Keenan, Hypnagogic Pop is:

Pop music refracted the memory of a memory. It draws its power from the 1980s pop culture into which many of the genre’s players were born, and which is only now being factored into underground music as a spectral influence. Hypnagogic realms are the ones between waking and sleeping, liminal zones where mis-hearings and hallucinations feed into the formation of dreams.1

Keenan describes his Hypnagogic Pop as having ‘exaggerated plasticity and … [a] feel for the hyperreal … resembl[ing] hallucinatory landscapes of exotica’.^2 It is this that resonates most with Psychotropicalism’s interest in the raw power of a new psychedelia. Although he is describing a musical world, Keenan’s idea seems applicable to other media, disparate in location and form, yet already in some sort of grouping.

Amelia Douglas’ 2008 essay ‘Psychotropicalism: A Manifesto in Search of a Manifestation’ examined the work of Dylan Martorell and Nathan Gray and similarly made a claim to something like a genre. Douglas noted in ‘Psychotropicalism’:

There is no room for irony. Cynicism and cool facades — they’re out too. We stand in the shade of the Big Pineapple; we look to psychedelic folds; we create fluid histories that are infinitely revisable. Pyschotropicalism emerges in the wake of a radical dissatisfaction with that which is: it sails across the oceans of rhetoric in search of the sincere.3

Which resonates with Keenan’s conclusion:

In seeking to transmute the kind of wretched pop culture long denied entry to the officially sanctioned environs of underground music, artists … have enriched and expanded upon the variety of sources experimental music can draw on while performing a form of psychic self-surgery through rituals of recuperation. A profound form of musical reflection that generates creative gold from long-abandoned cultural detritus, Hypnagogic Pop is true modern magic, a music that dreams of the future by dreaming of the past. All you have to do is believe.4

The parallels of drive and potential method, of recouping beauty from detritus struck me, but the usefulness of Keenan is that he isn’t talking about visual art. Douglas, whilst staking out similar territory, seems rooted in visual art; Keenan, having no such allegiances, presents a broader range of possibility for inclusion in a Hypnagogic realm, or a Pyschotropical world. They do seem to describe very similar things: is the Hypnagogic a version of Pyschotropicalism for the sound world? Douglas, in staking her claim, ties her manifesto to Dylan Martorell and Nathan Gray, who crucially make both music and visual art. Their music sounds just as their artwork looks: lush, complex and enigmatic — it is no great observation that both ends of their practice inform the whole. We can expand the Pyschotropical through the observations and parameters described of the Hypnagogic, and enrich both by mixing them together — approaching from either sphere — in the manner of many of these artists. It is a Venn diagram with a massive intersecting area, the parts of which are greater than the whole. Further, if Pyschotropicalism is a statement of intent, then the Hypnagogic is the creative methodology that feeds it. 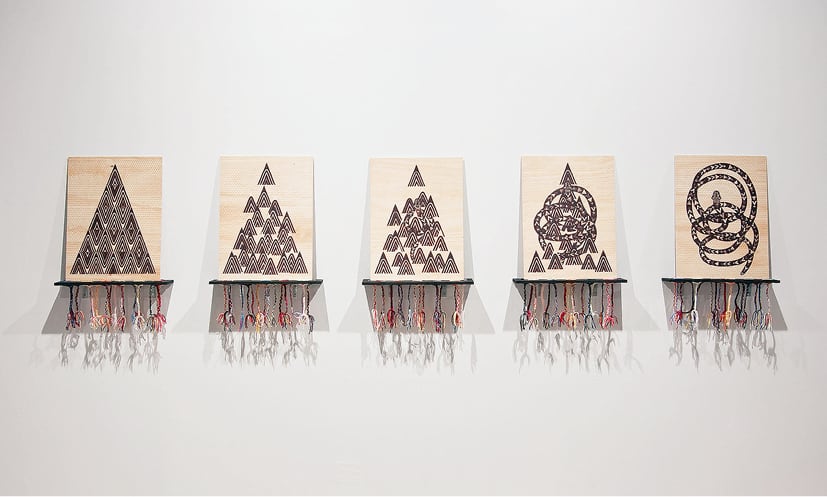 While the pool of artists / musicians of relevance here is considerable, I will focus on The Holy Trinity’s 1200cc Mary performance and the curated group exhibition, Dream Weavers. There is overlap: vivid colours, hints of pagan ritual and the occult, childhood memory, rescued and re-contextualised objects from the 1980s (synthesisers and BMX bikes), collage and repetitive — to the point of obsession — drawing. The premise of 1200cc Mary might easily be claimed as Hypnagogic, constructed around ‘a refracted memory of a memory’, which in Keenan’s words ‘drew its power from 1980s pop culture’. The performance segment consisted of The Holy Trinity as a gang of adolescent boys from the 1980s, who, in turn, are pretending to be God — in three persons. Upon their sacred BMXs, they swoop about the room, talking in mechanical voices through wrist-mounted modulators, becoming entirely ‘other’.

Dream Weavers, a group exhibition curated by Kate Just and Daine Singer, explores a range of strategies drawn together through the New Age movement. In this exhibition, the striking collage of James Eisen has the enigmatic feel of a twisted memory, each collage firmly located in the 1980s but of-the-now in its manipulation. The filtered source memory becomes dream-like and hints toward supernatural vision or something ‘ecstatic’. The dorm itself became enigmatic in Sean Bailey’s paintings that hint at an esoteric occult tradition, as do the astonishing spirit-summoning drawings of Belle Bassin. Beyond these exhibitions, there is an amorphous collection of artists whose work could also be mentioned in relation to these two concepts. The point, however, is not to place an endless list of examples under some kind of banner, but to question the purpose of this activity. The Hypnagogic Pop that Keenan describes can be applied to a group of visual artists — some of whom make music that could be placed in Keenan’s generic realm. It is here that the Hypnagogic seems to be able to blend with, and expand on, Douglas’ Psychotropicalism manifesto: the Hypnagogic creates the work of Pyschotropicalism.

We may be resistant to naming and thus potentially reducing the meaning of such a category, but the next and more important task — to unpack the political implications of this apparent moving moment — can only really begin within the act of naming. I note that Douglas has begun this work, but I believe that what was invoked by her and expanded on here, is a broader creative ideology that is strongly informed by political thought that expands into spheres beyond visual art and sound. This act of naming might be one of Foucault’s speech acts, an act of magic, or even faith — but it is something that is needed because whatever we choose to call this moment, it is happening. Now.

Andrew Harper is an artist and writer from Hobart.