un Projects is based on the unceded sovereign land and waters of the Wurundjeri and Boon Wurrung people of the Kulin Nation; we pay our respects to their Elders, past, present and emerging.
un Projects
⥖
un 4.2

The First Working Retrospective of the Fauxist International 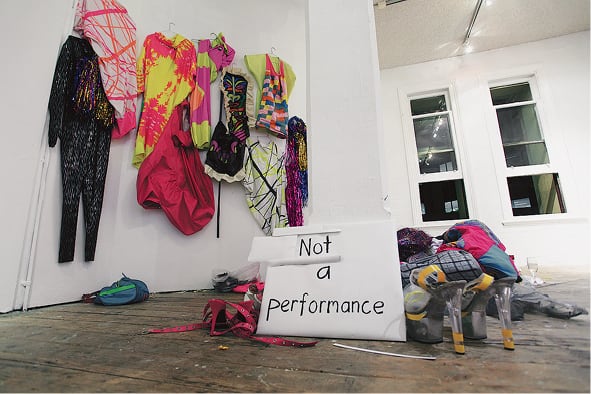 This retrospective attempted to catalogue and contextualise the immense production of the Fauxist International, a politico-conceptual art movement founded in Sydney in 2001. Via an excess of texts, communications and events, the Fauxists work to produce, maintain and disseminate minority economies of meaning through activist-driven ventures into fringe science, sex-worker politics and transgender reality. This exhibition carefully organises Fauxist practices to emphasise their capacity to make surprising and transformative insertions into the documentation and historicisation of cultural experience. These practices seem eminently pertinent to the discussion of art and politics today.

The exhibition was presented in parts. The central gallery space provided documentation from Fauxist activities over the last nine years, including rejection letters from academic journals, fan mail, plaques, and a map that charted the various global chapters of the movement. These products register both the marginalisation and international reach of the movement. They also establish the Fauxist investment in the practice of documentation itself, a strategy adopted by the movement in order to record speculative revisions of the cultural ‘truths’ that documentary forms of media typically present. This is especially operative in the various references (newspaper clippings, plaques and statements) to time capsules that have been generated, stolen, or modified by the Fauxists. One clipping, referring to a capsule stolen by the Fauxists reads, ‘Haberfield Public School searches for the time capsule buried by Haberfield demonstration School’.1 Another reads ‘Timeless Prank: UC Berkeley time capsule from ’50s reveals porn from ’80s’.2 These irreverent gestures act to carefully evade the flow of cultural regulation enacted by normative institutions and establish the Fauxist’s principal methodology: the co-option of material and textual forms that authorise official culture and their re-assignment as a means of sanctioning ‘sacrificial / invisible economies, cultural experiences, oppressed peoples’.3 Ziherl’s exhibition design, denoted primarily by besser block plinths, maintains this procedure through a series of displays that reveal their own construction and possible dissembling.

This approach to criticality is particularly apparent in the The Sex With Aliens Survey, conceived as part of a body of research conducted in response to the absence of research into sexuality and space travel by space programs, despite space voyages exceeding six-year durations. This research is at once ridiculous and critically significant: it evidences the position of the Fauxist International as unfailingly xenophilic, and also reveals their systematic dedication to research into and advocacy for formerly ignored cultural perspectives. In doing this, the Fauxists dislodge the disillusioned position of post avant-garde art by adopting the emancipatory rhetoric of the art ‘movement’. The movement advocates seemingly absurd speculation, and also challenges the pre-emptive historicity that sustains hackneyed political debates, by embedding itself into forms of documentation that disclose collective cultural identity.

The other components of the exhibition reinforce this agenda and more actively challenge the rarefaction of gallery-based art. Alongside the material manifestations of Fauxist activity, the exhibition accommodated a lecture space, reading room and residence taken up by Fauxist founder Regrette Etcetera. A midissage and two lectures took place during the exhibition’s two-week run, each hosted by Etcetera and including prominent guests Elena Jeffries (President of Scarlet Alliance, Australian Sex Workers Association) and Luke Roberts (Her Divine Holiness Pope Alice). These occasions exemplified the performative condition of Fauxist practice and employed a pair of vestigial whiteboards containing diagrams and research notes developed by Etcetera throughout the residency that documented the events that had taken place. This expansive structure allowed for an experience of the exhibition that was aptly singular, although requiring more than a short visit to come to understand this collective movement.

Kate Woodcroft an artist and writer based in Brisbane.