un Projects is based on the unceded sovereign land and waters of the Wurundjeri and Boon Wurrung people of the Kulin Nation; we pay our respects to their Elders, past, present and emerging.
un Projects
⍅
un 9.2 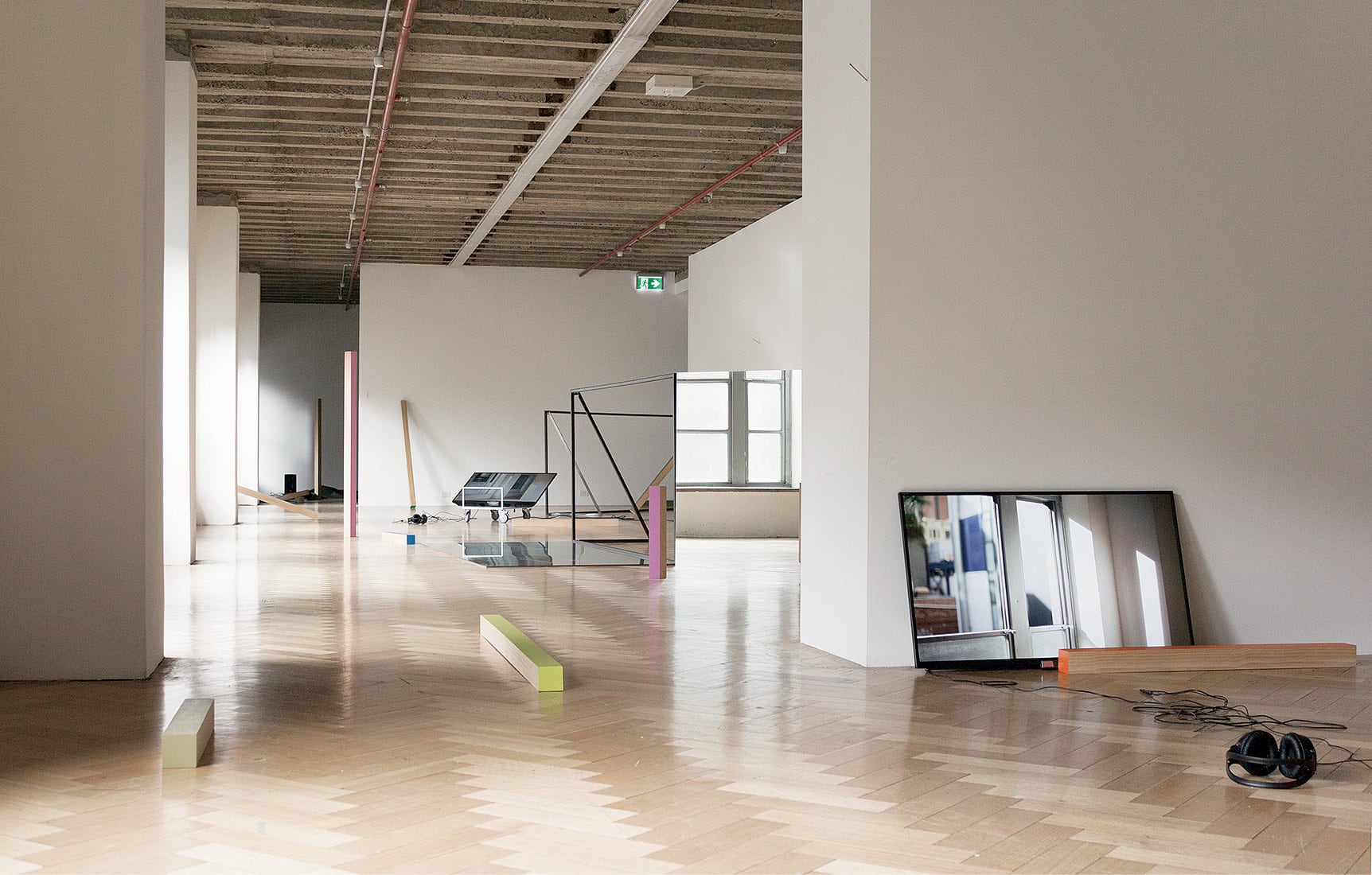 THREE ADJOINING SPACES WITH MANIFOLD EDGES was a five-week exhibition by Helen Grogan that shifted intermittently for its duration over West Space’s Front Space, Gallery 1 and Back Space. (The edges to the exhibition were unclear as room overlay/5 weeks/Thursdays 6–7pm/accumulation by Geoff Robinson was exhibited simultaneously for the period over the same three galleries.)

The galleries provided a framework for the shifting configurations of sculptural and spatial framings familiar to Grogan’s practice.1 I was only present at three moments during the twenty-seven days  the exhibition ran: on 17 June, 20 June and 2 July. My memory has compressed and I recall moments of configuration across the three galleries without distinction between the days I visited. Rather than attempt to give a descriptive overview of one day’s configuration, I will speak about moments of encounter within THREE ADJOINING SPACES WITH MANIFOLD EDGES, as the setting of Grogan’s sculptural objects acted as devices to frame my movements and facilitate observations and perspectives across, outside and within West Space.

Details of the wooden parquetry are blocked out by black rubber flooring that is half rolled out, dirty, its black capturing innumerable overlaid footprints. Free- standing steel structures, one holding a mirror with clamps, resemble a film screen or an empty billboard and frame views of the gallery’s architecture. The windows, usually closed and opaque, are now open and frame exterior perspectives; window frames, some blocked in with dirty insulation folded and fibrous, domestic views of a stranger’s house, a white t-shirt hangs, perspectives of the city, windows, skyscrapers, an apartment building, a palm tree sways. All are framing and re-framing depending on your position and proximity; sometimes your own body is reflected within a mirror’s frame or the window of the stranger’s house. Square shadows on the white walls shift, determined by the time of day. Another mirror positions the heavy concrete ceiling onto the floor; if I move to the left I can see the edge of the apartment’s roof and the sky, or if I move to the... I can see the.... These framings are loose; the steel structures have hinges, the angles can tilt. An LCD screen, on a low steel structure with wheels, depicts the space in a past time, a different configuration—last time somewhere else—a different angle allowing me to see the length of Gallery 1. Though temporally fixed, there is continuous potential for the opening up of new framings and perspectives.

Time past, a different moment

‘Film permits you to retrieve the present from a long time ago’, said cinematographer and filmmaker Babette Mangolte, who is better known for her work documenting Trisha Brown’s Judson-era dances and working with directors Yvonne Rainer and Chantal Akerman.2 The use of Mangolte’s cinematic framing is striking in two of Akerman’s films, Jeanne Dielman, 23 quai du Commerce, 1080 Bruxelles, 1975 and News from Home, 1977.3 Both are framed symmetrically and mostly without camera movement, employing a static mid-shot.

Jeanne Dielman, played by Delphine Seyrig, is a housewife performing monoto- nous, habitual and repetitive domestic chores for the film’s 207-minute duration. As a feminist gesture the director avoided ‘cutting the woman into a hundred pieces’, the film without close-ups or panning shots rather has Dielman’s body strictly contained by the framing of her surrounds.4 For the duration of the film we never see Dielman leave the frame, this oppressively fixes the character’s body within her pedantically organised and quotidian routines as she tends to the house, cooks, runs errands, cares for her teenage son and supports herself through sex work, taking a client at 5pm Monday to Friday within her home.

Conversely News from Home captures candid bodies on the streets of New York as they go about their lives, day and night, in the street, on a platform, walking, chatting on a corner or on the underground. Not tightly confined by the frame they rather stroll in and out of the different shots of the stationary camera. There are two moments of relief in this film: one is a panning sequence from a car amongst the city’s traffic, the other a shot that looks back from the Staten Island Ferry as it pulls away from lower Manhattan. Both films employ a symmetrical, harmonious, classical composition within  a static frame but to very different effects. The frame in Jeanne Dielman emphasises  the rigid, tense existence of the character who obsessively occupies it. Whereas  the framing in News from Home offers  a structure and a system for viewing the discursive drifting, noisy, chaotic wandering and muttering of bodies occupying public spaces.

A system, a frame to look through

An LCD screen rests on a low steel wheel- able platform. The video depicts the space  in a past time, a different configuration. This video whose duration is variable and accumulative showed a looped sequence of still interior shots at undetermined moments of its configuration. Movement comes from the sound, the sound of stuff and people moving inside of the gallery. The plastic sheets, transparent and black, moving in the breeze from the open windows, are discursive and spontaneous, more bodily than the framings around them. The sound of bodies in the videos invites  my body to move around the gallery. The ambient sound of the street is also contained in the headphones and mirrors the sounds heard before. Shadows on the wall in another shot show that time has passed; their position has changed. A body unseen interrupts with its own shadow as it passes through the gallery. A piece of tape swings. Unsurprisingly Grogan casually enters to place a plinth in frame, just for a second, adjusts and leaves again.

Simultaneity of structure and looseness

As in Jeanne Dielman and News from Home, the use of a fixed shot is also employed within the video on the LCD screen in THREE ADJOINING SPACES WITH MANIFOLD EDGES. Similarly, West Space’s Front Space, Gallery 1 and Back Space contained the exhibition and its edges, the in-frame and the out-of-frame. (Robinson’s exhibition simultaneously occupied these manifold edges and whilst each exhibition existed separately they also framed and informed one another.) My path through the galleries was partly determined by the positions of sculptural and spatial framings which acted as devices to frame my perspective of the interior and exterior of the gallery. I was also framed by them — this framing also constantly shifting. Here there is simultaneity of structure and looseness with any given day or moment allowing multiple paths, movements through, perceptions, perspectives, new observations and encounters within these malleable structures. In THREE ADJOINING SPACES WITH MANIFOLD EDGES the frames within the exhibition continually lay down organizational structures for potential ways of viewing or being framed within the gallery. It is in this strategy that Grogan sits somewhere between Akerman’s two films, expressing a need for structure but also chance and spontaneity.

Akerman describes Jeanne Dielman as ‘really what I saw as a child, my mother and her aunts and the way they organised their lives; it’s so they didn’t have any hole in their life so they didn’t have the time to feel too much’.5 Just as a window is a structure that frames a view of the exterior — an exterior that is inevitably subject to continual change, frames — structure and organisation can act as a mechanism to stabilise and secure the day-to-day. Framing could also be a frame of mind, a philosophy, a set of ethics within which to live and locate one’s life through. This could be rigid; the setting up of fixed systems which provide only one way of looking and doing and, like Dielman, using control in order to make habit and routine so familiar that they become mindless and automatic. It could also be a ‘balance between the orchestrated and the incidental’, a way of creating and recreating structures which accommodate change, the unseen and the unexpected, a system in which to look at and embrace what’s in front of you.6

The best way I can describe my experience within Grogan’s exhibition is a feeling of my nerves at the edge of my skin, a feeling that comes with an attentiveness to details  present and requires an acute present-ness to the inhabited environment. Grogan’s use of  framing brought the details of what was  already there forward and into view.

Elena Betros is an artist who lives and works in Melbourne.

2. Babette Mangolte speaking at If I can’t dance I don’t want to be part of your revolution, (Performance Day, 30 November 2014). Mangolte was closely associated with the Judson Dance Theater of the 1970s. Grogan has a Bachelor of Arts (majoring in Philosophy and Contemporary Dance) and attended the School for New Dance Development at the Amsterdam School of the Arts. She has a long-term investment in the work of Yvonne Rainer, Simone Forti, Trisha Brown, Lucinda Childs, Robert Morris and Bruce Nauman, who were also associates of Judson Dance Theater.

3. I would like to thank Georgina Criddle for bringing my attention to the use of framing in Akerman’s films.

6. In conversation with Helen Grogan she compared this phrase that Simon MacEwan uses in relation her practice with my use of the phrase ‘simultaneity of structure and looseness’. Thanks to Eleanor Webber for assisting me with this phrasing.
>
Georgette Brown, Wendelien Bakker, Anna Rankin, Sam Norton, Virginia Overell & Holly Childs, Vital Bodies, curated by Georgina Watson, The Blue Oyster Art Project Space, 8 July – 1 August 2015
Catherine Dale
⟸
How not to be seen
Georgia Robenstone
Filed under Article Elena Betros Helen Grogan review West Space
Advertisement
Advertise with un