un Projects is based on the unceded sovereign land and waters of the Wurundjeri and Boon Wurrung people of the Kulin Nation; we pay our respects to their Elders, past, present and emerging.
un Projects
⥺
un 9.2

The land of the monster 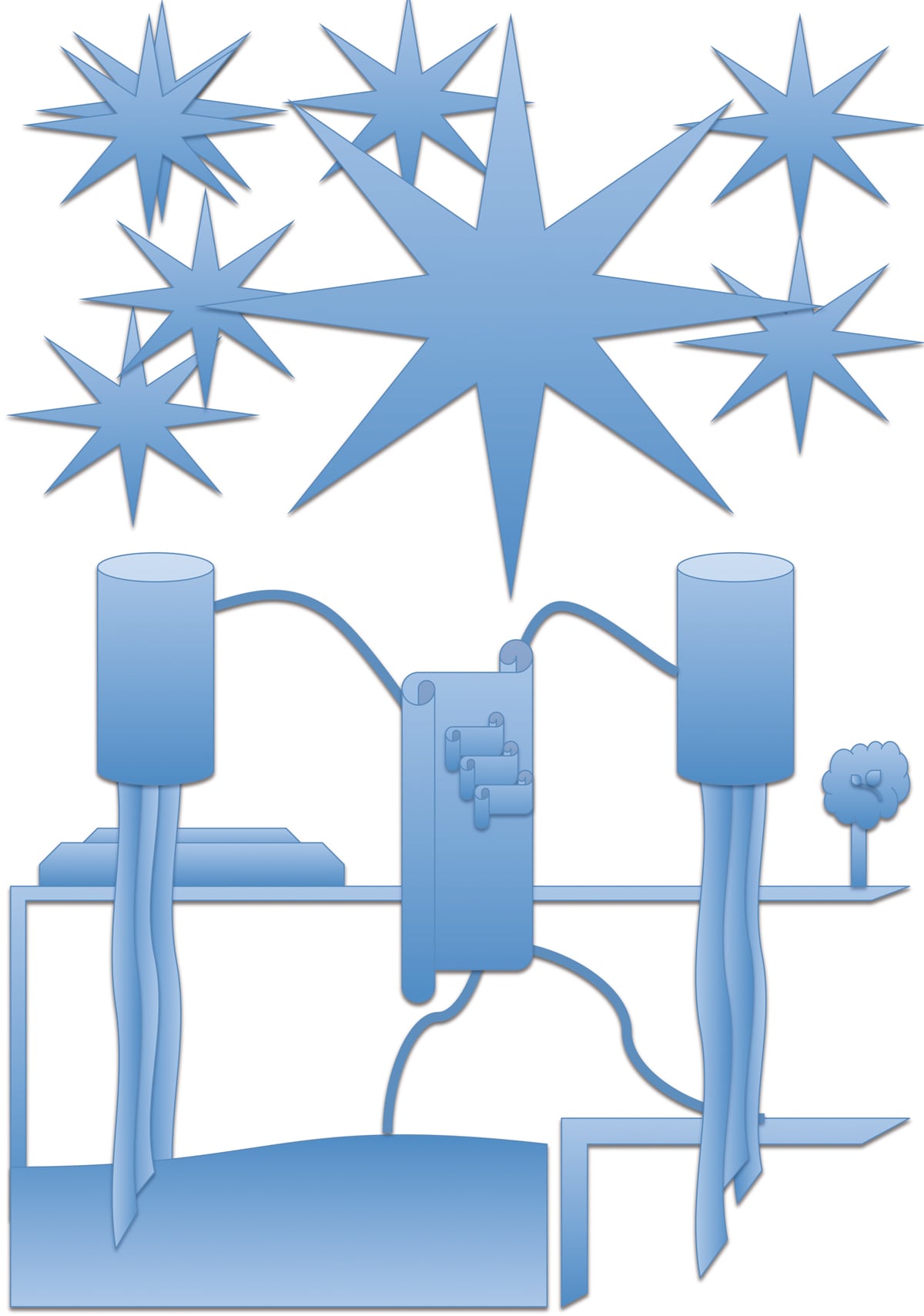 One of the most important things that identity politics has taught us is that the distinction between being and doing is fraught. To think you have to perform an action. To perform an action you have to discard frivolity and set yourself on solid ground. Discourses of violence are inextricable from the subjects they enmesh; in a brutal hegemony, the straight white man is coextensive with his privilege. It follows then that in order to think differently, we have to be differently.

Perhaps no other group of people are as fetishised in the now popular push to new subjectivities as are trans people. We have to remove the solid ground. ‘I think that’s the revelation of transfeminism’ says bird gurl Antony Hegarty, speaking now instead of singing, ‘Everyone has a spectrum of masculinity and femininity inside them. In every individual, a war of misogyny is raging.’1 Misogyny and what else

When we realise that all of us are constitutive of power structures, power starts to look like a beautiful, evil constellation. Scorpio. Someone’s at the head and someone’s at the tail, but we’re all stars. Is that the revelation of astrology? We don’t necessarily have to be looking through a telescope to know what’s going on in the heavens, to know how the stars and planets are affecting our lives. We can feel the pull…

How can we move to a less fatalistic model of power that isn’t obsessed with the astro(nom/log)ical science of taxonomy, one that can map new patterns in people?2

It is our effort, which we share with so many others at this moment, to understand our work as vehicles for the production of new subjects in the world. A recognition, again shared, that the subjects and the forms we have inherited neither accommodate the complex realities we are trying to live out, nor the ever more attenuated ways we have of thinking about them.3

What can Irit Rogoff mean in speaking about the ‘ever more attenuated’ modes of conceiving of ourselves in this world? I thought everything was free free free free free free and reasonable. Rich and rational. Inherited forms of capital lace themselves through our bone marrow. We innovate.

what is a subject?4

An individual confronts the world, and thus confronts his own death. He shapes nature to his own means; subdues it until it bends to his will like so many cornflowers in the breeze. A house is built, a monument to himself. A fire is lit. And to remind himself that he is not a tool, he does something beyond utility. Something not quite irrational, but not quite rational either… something lustful and unintentionally mechanical… something intimate. He kills another.

And the individual is triumphant—he will live forever—he is king.

A baby is born with blood on its head.

Inherited forms of personhood clot us with violence.

Divine walked into the room and ‘set slot machines in motion’. She is the protagonist of Jean Genet’s first book, Our Lady of the Flowers (1943). ‘Divine knotted, garrotted arteries. Her seductiveness will become implacable.’6 In excess of.

Politics does not interest the whore, it is the whore. Seduced by the incessant pain of living and dying and aching, she is simultaneously afraid of every little thing and fuelled with the exhilaration of having nothing to lose. She thinks that to speak logic of this world is pure delusion.7

The whore is Divine. She sells herself on the streets of Pigalle, Paris, to old fags, ­muttering and stuttering and scatter­braining along with them. Divine is called, by almost every academic who has written on her since, a man. But Divine is much more than that.

She creates a panic of terminology wherever she goes: ‘The whole café thought that the smile of, for the colonel, the invert; for the shopkeepers, the fairy; for the banker and the waiters, the fag; for the gigolos, “that one”; etc., was despicable.’8 This abundance of poisonous lyricism becomes the launching point for what Genet makes of her, indeed, what she is: a poem.

Divine dislikes definitive thinking. Although useful at times (and she finds it near at hand in grammar)—she associates it with ‘solidity’ and ‘virility’.9 It is, like the men she induces to pulverise her, attractive in its violent ease.

Divine is better accommodated by poetical conclusions, which she associates with femininity. ‘[O]nly then was Divine true.’10

Divine’s poetic honesty is fleeting, barely finding space between the rows of shutting prison bars represented by language. ‘She was prevented from thinking woman entirely by her organs.’^11 Her body is strung out on a clothesline of other bodies and she desperately wants to be put on another, and another and another. Laundry lists are always lacking. Will she ever be dry?

‘How can we become unnameable?’ asks Leo Bersani, as though it’s a choice you can make, something you can quietly and calmly work towards.12

Divine flips out into herself, into everyone she meets and ultimately into Jean, the narrator. He is writing from prison, entombed like Bersani in another hypertrophied institution. A swelling organ he’s locked into. A great big PIC.13

I close my eyes. Divine: a thousand shapes, charming in their grace, emerge from my eyes, mouth, elbows, knees, from all parts of me. They say to me, “Jean, how glad I am to be living as Divine.”14

When he wrote the book, Jean Genet was in prison—where of course you must be named. You have an ID number, a surname, a nickname, a cell number…15

I’m sick of fighting over whose prison cell is shittier.

In court, Divine loses her ‘loveliest adornment’, her name. And in its stead rises up a more sinister discourse: that of mental illness, criminality and state normalisation: a report from which ‘dropped such words as the following: “unbalanced… psychopathy… inter-relation… splanchnic system… schizophrenia… unbalanced, unbalanced, unbalanced…”’16 Another poem, but a poem like a national anthem, like The Internationale, or God Save the Queen.

The name used in court for Divine will also be applied to her almost-dead body in a conversation between her mother and the priest who will bury her.

Eve Kosofsky Sedgwick makes a speech at the CUNY centre for Lesbian and Gay studies in 1991. After six years of writing books on gay male desire, as a woman in a heterosexual marriage but enmeshed in LGBT communities facing the dog days of the AIDS crisis, she’s been diagnosed with breast cancer. She too has begun to die.

‘Nobody knows more fully, more fatalistically than a fat woman how unbridgeable the gap is between the self we see and the self as whom we are seen.’17 She calls attention to:

The stubborn magical defiance I have learned (I sometimes feel I have succeeded in learning) in forging a habitable identity as a fat woman is also what has enabled a series of uncanny effects … effects that have been so formative of my—shall I call it my identification? Dare I, after this half-decade, call it with all a fat woman’s defiance, my identity?—as a gay man.^18

This tacking, and to-ing and fro-ing. She’s uncomfortable going to that place of multiplicity, confessing to a cloud of scholars. The context is a queer movement that had largely purged, ignored or allegorised trans realities—one that still draws that line in the respectable sand.

Sedgwick takes it further. She brings a weight of actuality to her profession: hair having fallen out from chemotherapy, on hormone treatment, breasts severed—­nothing to do with her identification either way, but that it brings her closer, in illness, to her friends dying of another affliction.

For Eve, breast cancer isn’t proof of her inscrutable femaleness; not another way of accessing the ‘scarifying coarseness’ with which men and women are distinguished from each other, publicly, bureaucratically and ‘once and for all’.19 Her cancer is a bridge. One that allows her to connect her experiences to all the variegated people affected by AIDS—as well as breast cancer.

Under US-led neoliberal capitalism, where adequate healthcare is withheld from so many people, ‘every experience of illness, is, among other things, an experience of state violence, and where possible to be resisted as that’.20

She cancels the distinction between what were the ‘gay cancer’ and the ‘woman’s cancer’.21 These aren’t diseases intrinsically tied to any category of identity: they’re just diseases. International diseases. Although stigma and access to related healthcare may move along identitarian lines. Sedgwick shares our task, along with so many others at this moment, in attempting to break the painful singularity of those lines.

My body is a tissue of quotations.

Hers is an identification that falls across gender, across sexuality, across culture, class, geography and time. And it falls ‘no less across the ontological crack between the living and the dead’.22

In mortal illness the angel of death hovers above your marked body and the marked spaces around it. It overflows the distinction between subject and object. The same angel can be seen hovering over prisons and detention centres, hovering over our planet on the brink of collapse. It is an angel in excess of itself.

This planet beneath our feet rumbles with the sky above it, with the ocean within it. Manufactured sex hormones are now found in

foods, medicines, fertilisers, cosmetics, sanitary products, and other elements of material culture … They pass through the bodies of human consumers and non-human foodstuff animals into urine, milk, vomit, faeces, and blood, seeping into septic waters and leeching into fields, fertilising vegetal and bacterial growth, entering into new biochemical conjugations that make their ways into the bodies of others that, in turn, consume them.23

Whiffs of change on the breeze might be phytochemical or estrogenical. Rivers run milky with uncertainty as to who and who is not trans anymore!

In a sinking boat our faces become more and more interchangeable in the rising waters. As if you thought you were safe. Making ourselves anew means being ready to let it take us down.

Death means confronting things that we cannot know. It takes us to a place beyond language, beyond asides. It is beyond my linguistic elisions, erasures and violences.

Death means muddling the borders of ourselves in a confusion of shifting tombstones and donated organs. As an end it recognises our common birth from the ‘same anarchic Womb’.26 Staring forwards–backwards into that space complicates the lines of this one. As soon as we become people, others are precluded from the same. We rise from the dead at the expense of the already entombed.

How can I not be afraid of the middle place?27

Death means collapsing the distinction between sea and sky, between the island of the individual and the constellated star. I point out of the roof of this theatre and you see a referent beyond words. The milky river in the sky.

Cinnamon Templeton is writing an honours thesis on Jean Genet at the University of Melbourne. Their poetry collection terribly controlled was released earlier this year.