un Projects is based on the unceded sovereign land and waters of the Wurundjeri and Boon Wurrung people of the Kulin Nation; we pay our respects to their Elders, past, present and emerging.
un Projects
⥪
un 11.1 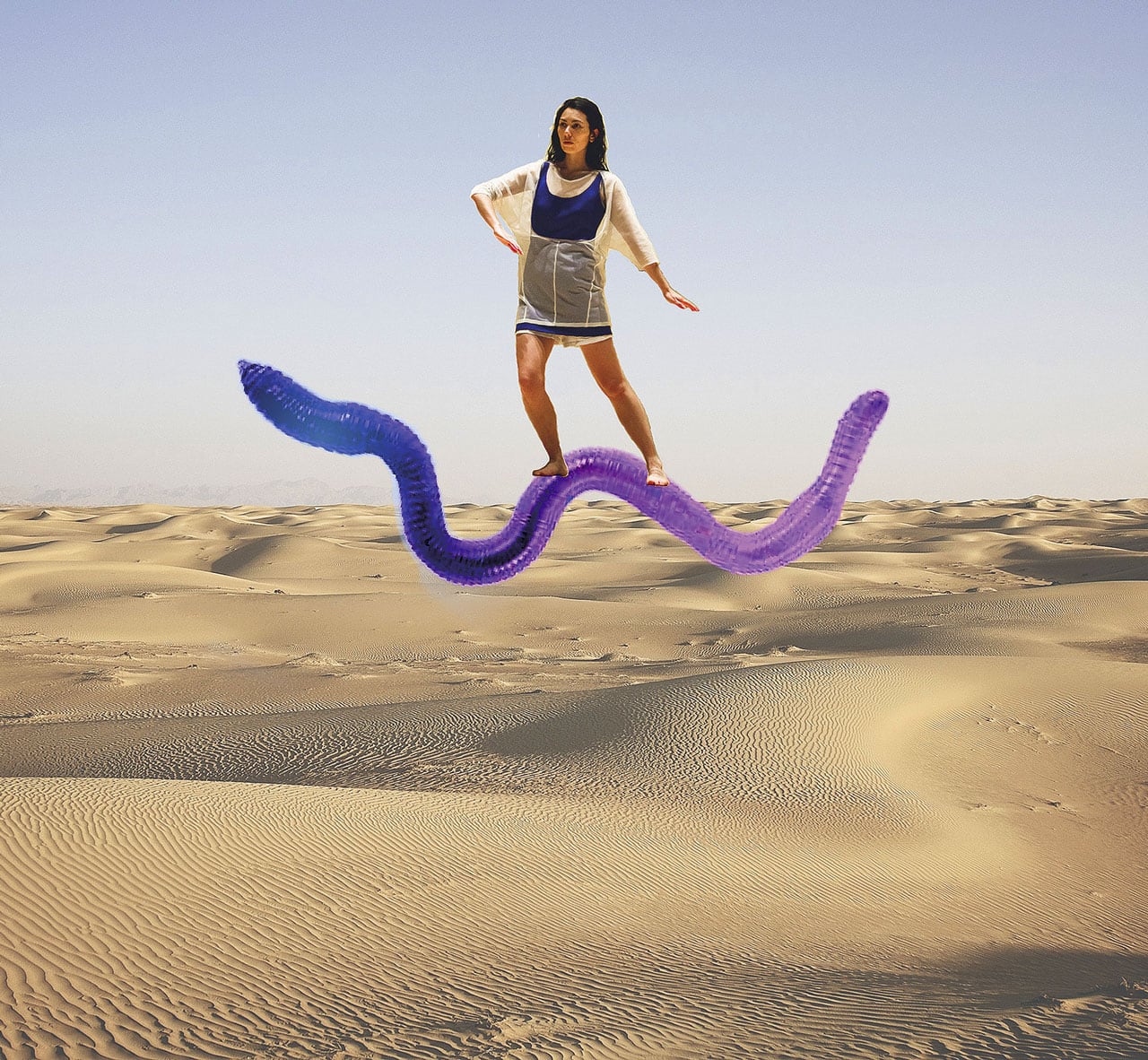 She starts with a series of statuesque poses while a Willow Smith track plays: I left my consciousness in the 6th dimension. I wonder where the mind of a dancer goes as they run their body through a routine for the hundredth time. The poses are classic but also slightly wrong: it is as though Angela Goh isn’t just working her angles, but is also being buffeted in slow motion by a dirty cosmic wind. Once she gets on the floor and starts rolling, uncomfortably backwards under green light, smoke and apocalyptic surf guitar, the transition is complete. Nothing for the remainder of the performance will, with any certainty, be what it is, or where it is, including Angela Goh. Desert Body Creep aggregates a few horror and supernaturalia tropes but it returns most frequently to the worm. The worm is a double-agent, upsetting visually in its formal distance from the human body and for what it can do as a force of decomposition. It is tempting to offer the ecological labour of the earthworm here as a more redemptive mascot, but nature also makes parasitic worms worse than imagined monsters, and Desert Body Creep moves somewhere beyond too-easy understandings of nature or even redemption. A giant gummi worm — edible, apparently — is Goh’s main focus. When she peels it off the floor it makes a noise like sucking. On all fours and in silence, she carries it laid down the full length of her spine like a cute body snatcher. It gently cradles her shoulder as she shrugs it off. She rolls a long blue tube — maybe a broom handle — underneath the worm to make it crawl. A wailing, romantic guitar plays. It’s Funkadelic’s Maggot Brain. There are other more abstract worms too, revealed in ordinary things like tubes and cables and conduits. Bar the novelty of gummi worm, all of Goh’s ‘props’ are ordinary enough to find at home, things like fabric sheets, appliances, or instruments. Run through with electric current, or played on or with, all become animated: brought to life in some way. If Goh affects something like consciousness on these inert things, she casts the reverse spell on herself, performing blank-face trance states, hauntings and projections. Sitting with a microphone and mixer, she fills the room with her disembodied, multiplied voice. One recorded note after another is first looped into an off-kilter siren harmony and then into a cacophony of abject, cinematic shrieking that propels her crab-walking backward as if possessed. She becomes a worm, becomes a ghost, becomes a zombie, is eaten by a worm and then becomes the former again. Performing disembodiment, undead-ness, Goh presents her body, like her props, as an animated object at play in an expanded field of other objects-made-living: I left my consciousness in the sixth dimension. Writing it down lends this process an unnatural acceleration: the sequences unfold at a crawling pace under deep control. In front of me, one half of a couple laughs at Goh performing childhood zombie-hands under a peach-coloured sheet. The sequences are slow, but they have comic timing. The other is on edge from all the screaming. Having already become an undead object, it is hard to conceptualise Goh’s eventual emergence from a pale green velour cocoon — naked — as an innocent ‘rebirth’. This tube has wormed its way around the stage consuming other fabric shrouds, former ghosts and zombies and spirits. Whatever transformation has occurred inside must also have been fed by this logic. Goh spends the remainder of the performance like this, au naturel. She pauses to tie her hair up and sip water, as if preparing for sport. She looks at us. I should not talk about how beautiful she is, but perhaps it is worth acknowledging that there are other spells we can cast to turn bodies into objects. She folds her cocoon into a plastic sac and vacuums it into tight, crinkled stasis. I think about emotional baggage. A naked woman elegantly posed with a long vacuum tube is both funny and disquieting. A naked woman, standing back to the audience on a machine designed to vibrate the body into shape, using a remote to control the intensity with which her body jiggles, is also deeply funny but, also, maybe not. Increasing in intensity with the vibrations are wailing guitar solos that bring the motion of her body under the veil of traditional dancing, but they stop sometimes before she pauses the machine and then she is simply moving beyond her control: her body is an object again. Then an abrupt shift in tone and she is a poignant figure piecing out the Maggot Brain refrain on an upright piano. Then she is done and she becomes Angela Goh again — probably. The patchwork of referents that make up Desert Body Creep — including art, cinema, literature, pop and the internet — are individually familiar. But they come together in unexpected ways: fear is funny, worms elicit tenderness, abjection has poise and structure. Goh short-circuits, too, any totalising concepts about the body — about the female body — and about what it means to be human. I think later about a Karl Marx aside that Jedediah Purdy used recently in n+1 magazine, discussing the human tendency to look to nature for both moral lessons and escapism.1 Marx had described locomotives and electric telegraphs — then current technologies — as ‘organs of the human brain, created by the human hand’ suggesting that objects or technologies could be read as disembodied agents of human consciousness and will. In this case, they acted as ‘organs of the human will over nature’ from which ‘man’ in ‘his’ labour had become estranged.2 Earlier, though, nature had also, for Marx, been part of human consciousness, an ‘inorganic body’ made palatable and absorbed through art and the natural sciences.3 Desert Body Creep might work with a similar logic, in which an ‘expanded’ humanity of objects — the body among them — work on and with a mobile consciousness. But nature is nowhere. Things are synthetic, or supernatural: nature isn’t lost or transformed, it is long gone, or never was. This means that when Goh haunts objects and performs as undead, she does so without mourning her estrangement from any authentically ‘natural’ order and neither does she mourn for meaning grounded in bodily affect, which seeking disembodiment might deny. Both of these are ideas — with associated moral dimensions — with which women often find themselves aligned. In those undead dichotomies between nature and culture, body and mind, thinking and feeling, structural rigour and chthonic mush, we are forever trapped on one side. The ‘supernatural order’ of Desert Body Creep is a rearrangement rather than an inversion: a tender, disciplined, shapeshifting woman can make within those categories some room for herself to move.
1. Jedediah Purdy, ‘What I Had Lost was a Country: The Politics of Nature in a Time of Political Fear’, n+1, 2016, https://nplusonemag.com/online-only/online-only/what-i-had-lost-was-a-country/
2. Karl Marx, ‘Grundrisse: 1857’, Marxist Internet Archive, https://www.marxists.org/archive/marx/works/download/Marx_Grundrisse.pdf, 2016, p. 648.
[^3]: Karl Marx, ‘Economic & Philosophic Manuscripts of 1844’, Marxist Internet Archive: https://www.marxists.org/archive/marx/works/download/pdf/Economic-Philosophic-Manuscripts-1844.pdf, 2016, p. 31.
➣
The Talk
Kate Britton
↫
Dear Masato, all at once (get a life, the only thing that cuts across the species is death)
Laura Couttie
Filed under Article Gemma Weston Angela Goh performance Pert Institute of Contemporary Arts PICA
Advertisement
Advertise with un