un Projects is based on the unceded sovereign land and waters of the Wurundjeri and Boon Wurrung people of the Kulin Nation; we pay our respects to their Elders, past, present and emerging.
un Projects
⥳
un 11.1

Writing for the kitchen

by Ivan Ruhle and Tom Melick 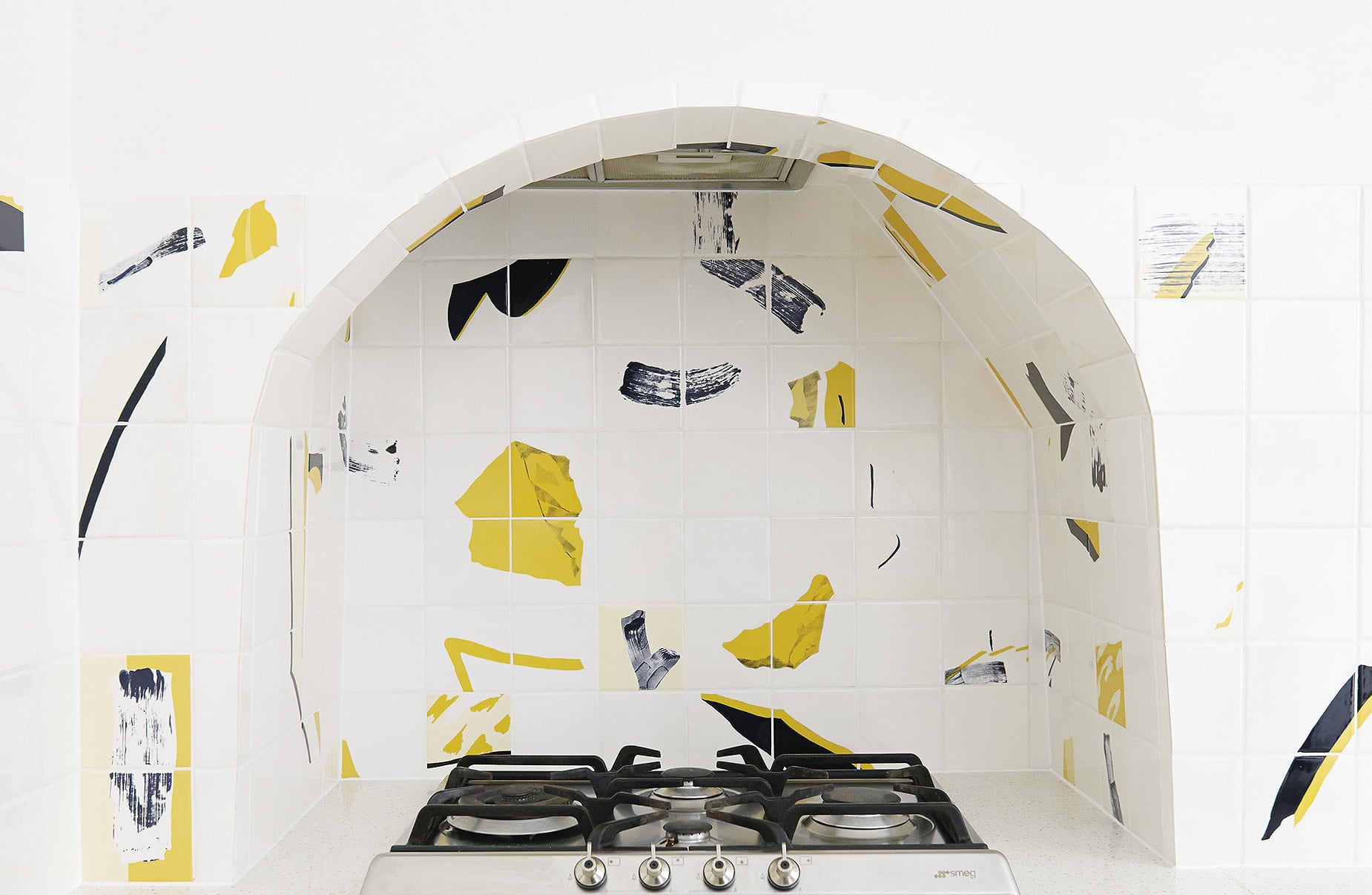 There is a painting in the kitchen. It has been hung there with a mixture of hardened cement, water and sand. It cannot be moved. Its position is permanent. Its presence definitive. The painting is an intruder.

The painting has pushed its way into a world of difficult detail. Kitchens tend towards chaos. Every centimetre of space is contested by a swollen proliferation of stuff. The laminated surfaces, corners and bevelled edges. The electrical outlets, attendant appliances, their snaking black cords, the switches smudged with foodstuff. The hinges, handles and boxes that are ushered back and forth from the mass of cupboards that loom on every wall and lurk underneath every counter.

The painting, an image frozen in time, has settled into a restless and crowded scene. The kitchen intrudes into the painting.

The kitchen is the most important space in the house. For that reason it is also the most frustrating. Every kitchen is a product of compromise, a tremulous détente brokered between the bounded and finite character of space and the madness of a world built upon the promise of the unending accumulation of material things. There is never enough space. There is far too much space.

This mess of necessity and pleasure intrudes into the painting. The painting fights back. It drags the kitchen into the frame, a planetary-body dragging in everything that falls within its orbit. The entire shifting, restless life of the kitchen is devoured. A domestic scene consumed and incorporated in a ravenous act of three-dimensional collage.

A kitchen is not unlike the stomach; it exists to serve. It is a space of consumption, digestion, and expulsion. In a kitchen, matter is pliable. Water is variously a solid, a gas and a liquid. Gas ignites, transforming into dancing rings of flame. Acids bubble and froth. Odours explode, waft and cling. We would like to offer a definition that is applicable to both the stomach and the kitchen: an interior in which matter is transformed and energy is extracted and put to use. We would also like to extend this definition to the painting itself.

This is what we know: the painting will have to contend with dirty dishes and the rest of it, but the kitchen will have to contend with the painting, too. This is how it should be. The painting is not precious. It has no need for a clean and sanctified space. In spite of its quietly geological fixity, the painting gives the impression of having blown in through an open window: stray papers in a gust of wind, bits of trash swept up and flattened against a wall. The image is built up like a forum of interlocutors, a common and inclusive scene that extends out from the painting and includes the banal and everyday misfits of the kitchen in which it resides. 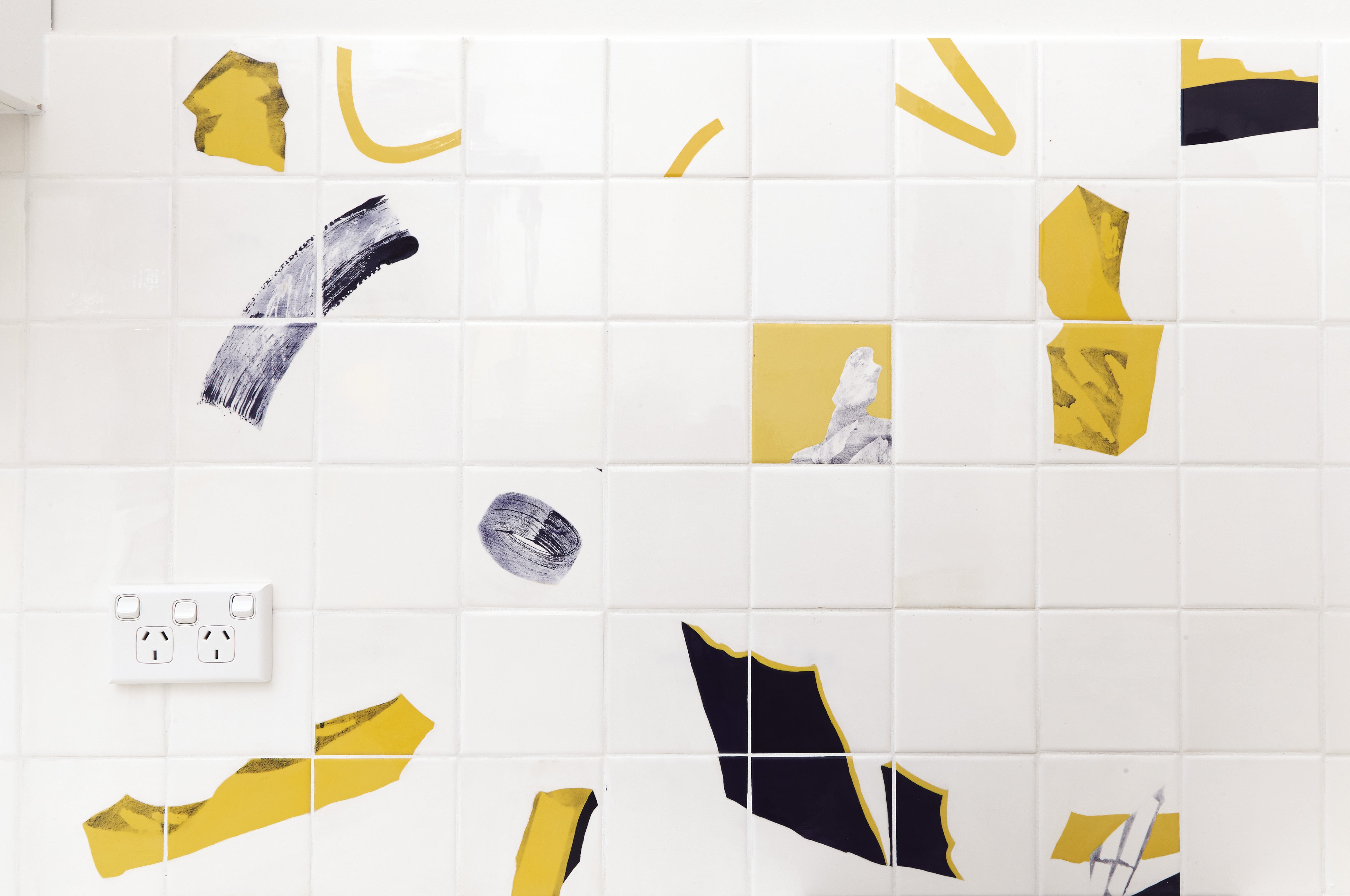 A painting must always contend with space and, because of this, it can also liberate and expand space. Sometimes with maximum effort and sometimes with almost no effort at all.

A tile is a unit, a component of a whole. A whole is complete, subject to a parameter, an outline that demarcates where the whole ends and the rest of the world begins. This outline allows us to focus on a given area, such as this splashback, in this kitchen, made up of these tiles. What is the purpose of a tile? To cover a surface, to decorate a surface, to have a surface that can be easily wiped and washed. Since a tile needs a wall, it is always an addition, a basic embellishment. Since Victorian times we have come to expect tiles in the kitchen and the bathroom (spaces for comings and goings).

The toilet and the kitchen are the busiest spaces in the house. They are spaces in which important work is done, necessity is fulfilled and mess is both made and removed. Rituals find a distinct form in these spaces.

Picture this painting at night in the cool light of an open fridge. You stare blankly into the distance, but your eyes come to focus on a shape caught in the middle of an outburst. Resurfacing into consciousness, it occurs to you that all painting should be seen this way: unprecious, with intimacy and immediacy. In the morning you decide to act on this idea. You tile every surface in your house, every room, ceiling, soffit, ledge, and floor board.

A grid of tiles is reconfigurable. The tile as a singular unit is ambivalent and is imbued with a latent mischief. A tile from one position can just as easily occupy any other position within the grid. A deception facilitated by the identical dimensions of each tile. One by one the tiles might move until something new yet faintly recognisable emerges. Fixed with grout the image remains as it was intended, frozen, static.

Held in the mind, the painting swims.

The surface of the painting is impermeable. Each tile is covered with a liquid mix of silica, alumina and melting agents that are used to control the temperature at which the silica melts, transforming the mix into glass. The tiles are fired in a kiln, the extreme temperatures fusing the marks of the painting into a layer of glass. They cannot be smudged, smeared or erased. The image is trapped. The mark is a layer of matter that belongs to the object but is somehow distinct from the object. The object and the mark have been fused together.

A typical ceramic kiln achieves temperatures anywhere between 1100 and 1400 degrees Celsius. Most kitchen ovens achieve temperatures between 90 and 260 degrees. The slightest deformation causes a tile to crack and shatter. Heat is as important to the life of the kitchen as it is to the formation of a tile. A kettle spills rolling water vapour into the air. The heat of the oven causes the skin of a sweet potato to blacken and blister. Oil sizzles in jittery lines on the surface of a pan. Ceramic objects possess incredible fortitude and endurance, with some ceramic artefacts dating back 29,000 years. Yet the tile is a remarkably fragile entity. Try to push it out of shape and it will fail catastrophically. Remove a soufflé from the oven too quickly and it will collapse.

This painting is just one thing at work in a constellation of busy things. It doesn’t have the time or the space to be neurotic. It does not fret about its existence, fixed as it is on the kitchen wall. It does not object to the mess or the cleaning or the burnt toast. The painting is perfectly at home, a permanent and welcome intruder.