un Projects is based on the unceded sovereign land and waters of the Wurundjeri and Boon Wurrung people of the Kulin Nation; we pay our respects to their Elders, past, present and emerging.
un Projects
⥶
un 11.1

Sites of extreme violence have a way of slipping back into unremarkable anonymity with the passing of time. Associated structures are replaced, marks worn away, new surfaces laid over the original and, as witnesses pass away, these histories dissipate, eventually becoming totally muted. Standing By Tunnerminnerwait and Maulboyheenner, Brook Andrew and Trent Walter’s new public installation, brings such a site back to visibility and in the process reopens an unfinished conversation. Their new work, installed in late 2016, is less a public artwork and more a war memorial^1. The war in question being that which played out as a campaign of numerous and bloody frontier battles between Anglo-Europeans and Indigenous peoples during the colonial invasion of Australia. The specific episode with which Andrew and Walter have engaged is the public hanging of Tunnerminnerwait and Maulboyheenner, two young Tasmanian Indigenous Palawa men2, on January 20th 1842. These two had been brought to Victoria from Tasmania two years earlier, along with another three Tasmanian Indigenous women, including Truganini. There they had been under orders of George Augustus Robinson, so-called Protector of Aborigines, on a cleansing mission to negotiate with last remaining Tasmanian Indigenous peoples. There is a persistent theory that, having already witnessed significant oppression and violence against Indigenous peoples in Tasmania, Tunnerminnerwait and Maulboyheenner were driven to retaliation after witnessing further abuses on the mainland, specifically the abduction of Indigenous women by colonists^3. Subsequently, out of this crucible of experience, Tunnerminnerwait and Maulboyheenner emerged as freedom fighters, determined to push back against the machinations of the toxic colonial program. The pair left Robinson to head into the bush along with their companions, and, though it is unclear exactly what occurred during this period, they were subsequently captured and tried for the murder of two colonist whalers in Western Port, and then, only two months later, publicly hanged at the corner of Victoria and Franklin Streets in Melbourne CBD in a circus-like event. 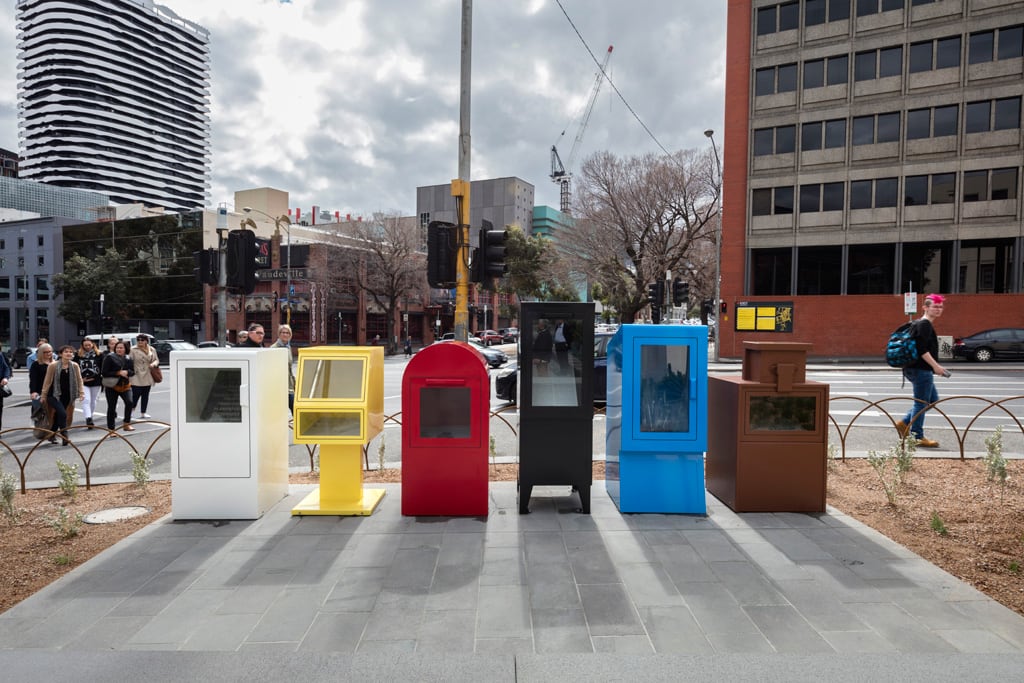 Considering that this war constitutes the event out of which contemporary Melbourne emerged, it is a conflict seldom discussed and, until now, all but invisible and unmarked within Melbourne’s cityscape. In response to this omission from Melbourne’s extensive network of monuments and memorials collaborators Andrew and Walter have assembled a materially diverse, decentralised outdoor installation. Comprising of a galvanised steel gallows-like form, bluestone markers, plant beds of various natives and five compact, brightly coloured sculptures in the form of old fashioned newspaper vending machines Standing By Tunnerminnerwait and Maulboyheenner resists the centrality and verticality of the traditional Western memorial monument. Instead constituting a diverse constellation, the points of which enclose an emotionally charged, openly accessible space. Incredibly, Standing By Tunnerminnerwait and Maulboyheenner occupies the actual site of the event it memorialises - a plain, anonymous corner that was, in earlier civic memory, known as Gallows Hill. The galvanised iron structure recalls a children’s swing set and the provisional gallows used in equal measure, and from this structure two chains hang loosely, each connected to one of two separate bluestone slabs bearing one of the names of those executed.

The bluestone slabs, un-monumental in their horizontality, generate a productively awkward push-pull dynamic. Set at an ideal height for sitting, they invite occupation and contemplation even as their abstract corporeal weight generates a difficult ambivalence toward interaction. In short, the viewer is required to think about their body in relation to these masses. This uncomfortable but generous invitation to occupy, both intellectually and spatially, the structure of the work characterises the challenge to both engage, and learn, that the installation offers as a whole. Materially, the specificity of bluestone, a locally quarried material from which much of Melbourne is built and paved indelibly connects the work to place, making clear through metaphor the foundational significance that this event occupies within the establishment of the Melbourne colonial project. Though anchored in the past and dedicated to revitalising a diminished history, Standing By Tunnerminnerwait and Maulboyheenner generates a strong connection to the contemporary moment. The present tense solidarity of its title itself points toward living people engaged on behalf of the fallen men, and this is echoed formally and conceptually through the incorporation of living native plants. Flanking both outer sides of the central gallows sculpture are beds of Victorian and Tasmanian plants including Salt Bush, Wallaby Grass and Pig Face amongst others, all plants traditionally, and still, known by South East Australian Indigenous people as being useful for food, healing and weaving purposes. Whilst the plantings function only on a formal level for the unknowledgeable, they present a significantly legible text to those in possession of the relevant traditional knowledge. This deliberate engagement with Indigenous cultural knowledge functions like an embedded code, a message in invisible ink, and in the moment of recognition performs as a metaphor to underline and the continuity of Indigenous peoples’ connection to land right up to the present day and, by extension, into the future.

The last element in the installation is a group of five vibrantly coloured, squat forms modelled upon the outmoded technology of public newspaper vending boxes, each of which contain fragments of historical and recent textual information relating to the event. In repositioning these texts as ‘news’, the artwork reinforces its gesture regarding the currency and relationship to the contemporary Melbourne that this event comprises. Between the living plants and historical texts; beneath the harsh gallows; and atop the heavy stone markers two bodies are conjured as spectres. Their figural absence, undepicted and therefore unfixed, renders them unsurpassable. Andrew and Walter’s refusal to fix in a concrete manner the two subjects of this memorial constitutes both a challenging provocation and a generous invitation to acknowledge, discuss and contemplate what is a dark layer of history beneath the surfaces of contemporary Melbourne.

Andrew Atchison is an artist who lives and works in Melbourne. This is a review of Brook Andrew and Trent Walter’s Standing by Tunnerminnerwait and Maulboyheenner, a monument at the corner of Victoria and Franklin Streets in Melbourne’s CBD, that stands as a monument and war memorial to the two Aboriginal men who were executed at the site in 1842.