un Projects is based on the unceded sovereign land and waters of the Wurundjeri and Boon Wurrung people of the Kulin Nation; we pay our respects to their Elders, past, present and emerging.
un Projects
˱
un 5.1 was born on 6th June , third child and second son of his parents, who had between six and eight children. His father was a successful goldsmith, in the rural town of Tours in the Loire Valley in France. He emigrated to Australia in with his family and arrived in Tasmania in . Young Henri became an apprentice jeweller and later opened his own premises in St., Hobart, with a specialty of engraving. Henri is a keen amateur collector and displays his arrangements every year in annual Collecting Expositions throughout Hobart and interstate. In 2008 Henri returned to France in order to trace his ancestral line — in particular, the fates of his unfortunate great aunts Christiane and Lea Papin, also of Tours.

The room where Henri was born

The room has four walls. No windows. No doors. Only a small wooden table and a chair. It is perhaps the perfect room. A peaceful void patiently awaiting the presence of a person. We introduce a figure to the room and name him ‘Henri’. The figure sits at the seat, tapping his fingers upon the table, awaiting something to do. We give Henri pencil and paper. If a person cannot speak their internal thoughts to another person, at least they can write them down and imagine them to be read one day by another. That is a comfort in itself I think. A person always requires some outlet. Otherwise the room would become a prison and the person an anguished pest, battering away at our conscience. A person’s thought will become toxic if no tap is provided and we are not setting out to torture anyone here. A pencil and paper will suffice.

I was uneasy about the pencil and paper. I did not think the splintered whisperings inside my head were worth committing to the history of the world. The only phrase I summoned with any power was ‘SATURDAY MORNING PORN CARNIVAL’, which spidered across the page in repeating lines. I gave them thirty pages then sat quiet. This proved fortuitous. The quiet invited my idle hands to explore and I have found my head contains wadding that interests me in other ways. It seems I secrete strange fluids. Soft crystalline rocks crust in my nasal passages. Foul tasting earwax can be delicately excavated from my ear canals with a fingernail I have grown long and pointy for the purpose. Sometimes my eyeballs flood with salty water and fine white powder forms at the creased corners of my lips. Its production is tripled if I drink no fluids and breathe loudly through my mouth for the day. I harvest my secretions meticulously, pressing them between the sheets of paper provided. My pencil scratches out notations on colour, quantities and consistencies neatly in the top left margins. I have grown proud of my personal archive and often think of expanding it beyond my room (at night I dream vividly, seeking out the secretions of others. My dream self inserts worming fingers into dark moist cavities. My tongue delves deep into drainpipes searching for fishy scum. Saliva is sucked from willing mouths into my own).

After a long gestation period Henri is let out of the room into the house, a rather blank and sterile house at this particular point of time. Henri roams the empty rooms, fingering the textures of the curtains and licking the walls. He searches the carpet for dried insect carapaces and arranges the corpses into new hybrid species on the coffee table. Most of the time though, he stands at the window looking out at the goings-on of others in the world. If others were aware of Henri-at-the-window they may relegate him to the status of a lonely shut in, bleeding longing and desire. This is not the case at all. Henri knows no loneliness. Henri is as cool as ice. I may even describe him as a man island. Henri would simply like to remain detached and untouchable while he nurses the embers of a grand idea.

Henri watches the movie ‘Castaway’ and has a seminal moment

Initially I identified completely with the character Chuck Nolan who is played by Tom Hanks. Tom/Chuck is a man alone, imprisoned on his island. I sizzled with recognition! I have even heard myself once described as a ‘man island’. The earth provides for us but essentially our greatest task is to hold ourselves together against its elements. We are in constant battle with the world; the wind steals strands of hair, the sun nibbles at our skin. The solitude invites dangerous thoughts. Tom/Chuck’s flaw was in his compulsion to prattle. He even set out to devise a receptacle for his thoughts, that being Wilson the coconut. This is where our paths diverge. Tom/Chuck would have done better to keep himself resilient and whole, instead he wantonly discharged the contents of his head into Wilson’s husky orb. Eventually all that was left in Tom/Chuck’s pretty skull was the sound of ocean waves knocking against the beach. That is the potential consequence of isolation on a desert island … you eventually empty out into the sand. Or a coconut. If I ever get my hands on Wilson I would make a meal of him and it would be as if I were ingesting Tom/Chuck himself. All those secrets whispered in the dead of night, lips brushing against furry shell … it is dangerous to give of yourself to others, consciously or not. I endeavour to keep myself to myself and if others are so careless with their thoughts and bodies I might have them too. 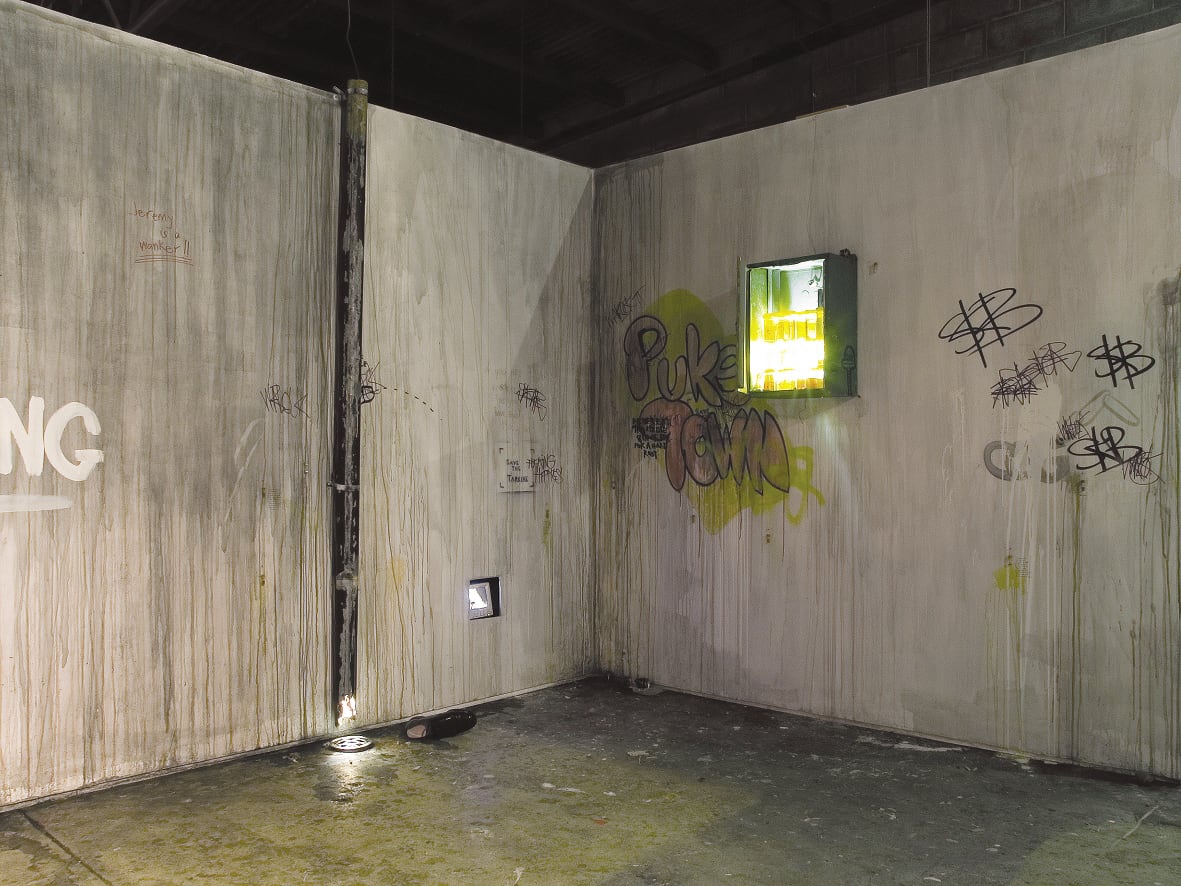 Henri goes out in the world to investigate others

I desire to be faceless. It is easier to observe others if their eyes slide right off my too-smooth features, unnoticed in my regular corner booth at the Pancake Parlour (situated discreetly behind dusty plastic palm fronds, my eyes soft, innocuous orbs behind thick lenses, a reflective shield between observer and observed). I always take my napkins with me, slick with a blend of sugar, grease and incriminating traces of my own saliva. My secretions are part of me, after all, and one must be constantly vigilant to maintain one’s physical integrity. To obliterate oneself you must be careful to remove all traces and I would not want parts of myself to fall into the wrong hands.          I could never shed my body so imprudently as I have watched others jettison their by-products like tomcats in -alleyways. There are places in the city that people return to night after night. To noisily void their stomachs of half-digested Kebabs and geysers of beer. I become hypnotised by the black torrent of piss that spreads beneath a squatting girl rendered clumsy and vulnerable, her useless eyes darting furtively towards dark corners. Occasionally couples frequent my alleyways to smear their faces violently against each other, leaving behind cheap underpants and cooling puddles of latex. I feed their residues to my SEX>MACHINE that I keep running at all times in my basement (where else would it go?). It must never be let to run down or a catastrophic meltdown scenario may occur. The quantum thermo rods could overheat to melt through the steel containment vessel, exposing massive quantities of ILLICIT BEHAVIOUR to the outside world.

Henri comes to some conclusions about others

How do we know the makeup of a person beyond what they want us to see? If we leave it up to them they will only offer up the blandest projection of who they think they are, or want to be. There is more soul in an animated smurf. More sexiness in a GRAFFITiED COCK ’N’ BALLS than in those calculated simulations that people imagine are MEANINGFUL EXCHANGES. My ears ring with the inane burble of shared interests, dribbled from loose lips over potted plants and water coolers. Such behaviours reek of desperate artificial sincerity. I believe we are much closer to a person’s essence when interpreting what someone involuntarily leaves behind. If I could capture those wavy stink lines emanating from that distressed man on the train. To bag that stink. To run it through my SCENT>SOUND machine to amplify the WRACKED GROAN that thundered into a migraine at the exact instant he was told his usefulness had expired. To get that close to the core. Breathing in the scaredy-stink-breath floating its prescient message of what it means to be housed in a rotting body with only a maniacal raving soul for company. When I become overworked I relax by imagining myself fully bound in industrial cling film, pulled taut to keep all my parts neatly together. My breathing becomes steady and rhythmic as if through a straw. The cling film is a balm to the feeble charade of containment these untidy transmuters exhibit. I know how much you lose of yourself every day because I follow behind you gathering it all up.

My shopping bags are always full. A person is an accumulation of hair, skin, wax, snot, spit, piss, shit, ejaculate, boiling brain, hissed words, crumpled notes, observations and stray thoughts. If we leave parts of ourselves around the world then where do we locate ourselves? Am I, Henri, in the room inside my head or in the parts I have inadvertently shed on the outside? Do we become diluted if we distribute ourselves so carelessly? How much can you cast off before you begin to empty out? It cannot be limitless, surely. And if it is not limitless, then our traces must have a value and our stains become a sum of who we are. Who is to say what contains the essential parts? I cannot be so presumptuous as to disregard the insignificant. What of the spat fingernail? The fallen eyelash? The groan and the ejaculate? (Alternatively, carefully dry in sterile conditions, crush the residue in a pestle then ingest with food in powder form). Is it in the words that a person speaks? Or in the spittle that sprays as the words are spoken? Does some part of our selves burrow into the ear canal of the listener? (That may prove rather problematic to retrieve but I can only try).

My collection of SACRED AND SIGNIFICANT objects grows exponentially. I am essentially a completist and the work never ceases. I am comfortable with the knowledge that the project may never be finished. My subjects are so reckless with themselves. As soon as I tidy up, more debris appears. People are production machines and I, Henri, am the street sweeper. The cataloguer. THE COLLECTOR. My rooms are filling with display cases and provisions. My transceiver machines that help decode the offerings have begun to nudge the ceilings. The rooms hum with their grumbling mechanical digestion, churning snarls of collected hair and spent tissues, issuing forth enthralling scents of burning hair and burnt … tissue. The ash is mixed with petroleum to make a pleasant balm for my morning ministrations.

I think it’s nice when someone takes an interest.

Fan fiction is a broad term that defines character driven stories written by fans of the original work, rather than by the original creator. Henri Papin is a Superfiction originally created by Tasmanian artists Mish Meijers and Tricky Walsh. Jess Johnson is a fan of them all.