un Projects is based on the unceded sovereign land and waters of the Wurundjeri and Boon Wurrung people of the Kulin Nation; we pay our respects to their Elders, past, present and emerging.
un Projects
⇐
un 5.1

‘You’ll see banal and dramatic landscapes; by the end you won’t know which is which’ —The Centre For Land Use Interpretation One is liable to see things in maps that are not there. One must be careful of the hypothetical monsters that lurk between the map’s latitudes…1

What is legitimacy? What is it that makes a person, a group or collective or a government legitimate?

Is it is to exist within certain -systems of thought or spheres of influence? Is it a function of something’s internal logic or its external relationships? Is it the imprimatur of a privileged few or a credible authority, or simply of popular acclaim? Is it an inviolable truth, or just the present position of shifting convictions?

The meaning of ‘legitimacy’ is contested, but one attribute common to its competing definitions is that it involves a socially constructed and psychologically accepted right to exercise power. Legitimate organisations tend to have a transparent and specific purpose, relating to the filling of social voids and the servicing of social interests. But what of an organisation like the Los Angeles-based Centre for Land Use Interpretation (CLUI) that wears all the trappings of legitimacy except transparency?

Presenting itself as a not-for-profit research and education organisation, CLUI interrogates the aesthetics of functional land and its uses, exposing in the process unfamiliar and otherwise hidden American topographies. Abandoned US Air Force bases, decaying ghost towns, nuclear testing sites and historic landmarks comprise the American landscape observed by CLUI. Their stated mission is simply ‘the increase and diffusion of knowledge about how the nation’s lands are apportioned, utilised, and perceived’.2

CLUI has three divisions: Projects and Programs, the Land Use Database, and the American Land Museum, which, interestingly, is located within a few hours’ drive from one of the world’s largest open pit mines and Robert Smithson’s Spiral Jetty 1970, at Great Salt Lake, Utah. CLUI’s various divisions are responsible for a massive informational output: exhibits, bus tours, publications, lectures, online archives, maps and images.

A quick look at CLUI’s Land Use Database website reveals thousands of indexed images, descriptive texts and resources classified as ‘unusual and exemplary’. On the surface, the deadpan, didactic presentation seems to be an exercise in freedom of information — the remarkably thorough distribution of thoroughly unremarkable knowledge. Hours could be spent trawling through the database’s various categories, each of which hosts an exhaustive list of archived land sites. One such site is Archive ID#: CA4995, A-1 Tow Yard, at the Tired Iron Museum near Barstow, California.3 Assigned an archive number, the image is accompanied by a brief description of the land site: ‘A-1 Tow Yard is a display of homemade terminator vehicles built from wrecks towed off the interstate’. 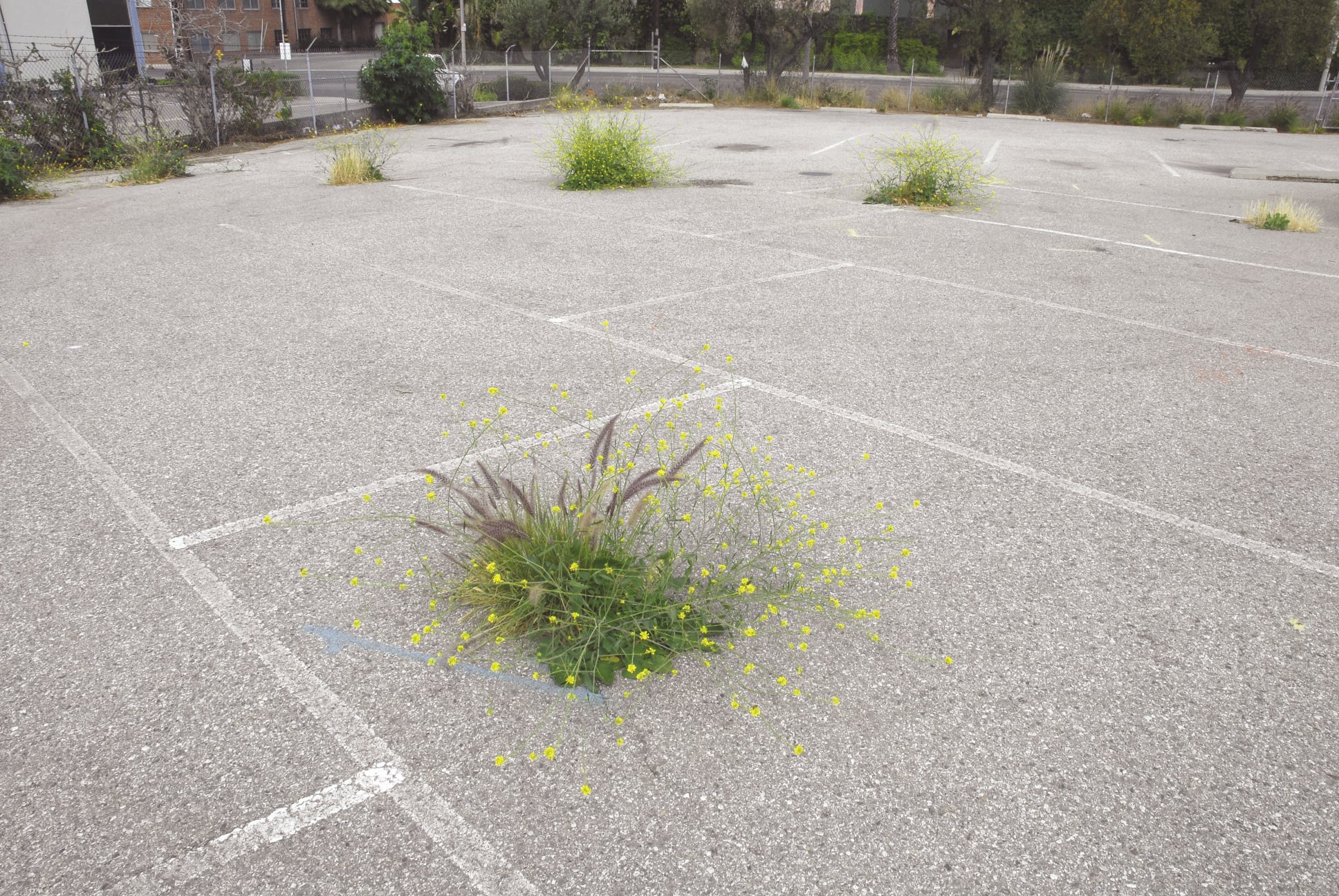 Each entry, however, is a fact disconnected from context; scrubbed clean of any obvious meaning. No matter how thoroughly one explores the archive, CLUI’s agenda remains obscured. Despite their obsessive classification systems, CLUI intentionally resists orderly classification.4 It demonstrates its refusal to occupy an overt political or moral agenda with an aesthetic of exaggerated neutrality and a conspicuous lack of editorial comment. In fact, CLUI’s self-presentation is part of a pretence of detachment, under which runs a current of sly irony. The framework for observation in the Land Use Database — provided by the unified ‘artistic’ perspective of the images, the voice of the text, the website indexation and presentation of the data — amounts to a highly mediated form of representation. So, too, do CLUI’s didactic displays and guided bus tours, which quite deliberately structure the viewer’s experience. The facts themselves might not be manipulated, but we, the observers, certainly are. CLUI professes no agenda, but their influence on the observer’s experience is their political agenda. They do not tell us what to think but, by presenting us with pockets of disconnected facts and raw information, they force us to think and to confront the power of that thought in constructing reality.

The information CLUI provides intentionally obscures as much as it reveals. We are more likely to drown in their vast reserves of information than derive clear meaning from them. The deadpan images, dry data and descriptions are self-evidently factual — these land sites do exist and we are encouraged to visit on a tour or locate them on a map. However, CLUI casts the viewer into a state of accurate uncertainty: accurate — as the sites are real — and uncertain — because little is done to remedy the feeling of disorientation that accompanies our perception of them.

The intention to disorientate is on full display in CLUI’s guided bus tours. Billed as a ‘Multimedia Phenomenological Odyssey’,5 the onboard video shows footage collected from US Military PR, Hollywood westerns and documentaries about southern California.6 The tours superimpose a kitsch tourist mystique on that which they simultaneously set out to demystify the American landscape. Travelling between sites, the tour guides interact with the participants in ironic language over the loudspeaker: ‘you’ll see banal and dramatic landscapes; by the end you won’t know which is which’.7

CLUI’s penchant for disorientation has parallels with Nicholas Mangan’s A1 Southwest Stone, where Mangan deliberately confused fact and fiction in an off-site work produced for the SITE Santa Fé Seventh International Biennial, Lucky Number Seven in 2008. A1 Southwest Stone was created on the grounds of a rundown garage that had once housed stonemasons and a car repair business in Santa Fe, New Mexico. Mangan’s installation transformed the site into a ‘fake’ excavation, supported by a fictional narrative and the display of supporting documentation relating to the dig and its discoveries. The installation revealed and explored the site’s lost social, political and ecological narratives. Rather than offering an authoritative historical account, A1 Southwest Stone stimulated investigation into the function of such narratives in its historical representation.8 Where Mangan disorients the observer with fiction, CLUI disorients with facts.

This leads to CLUI’s larger project: to confront the observer with the power of observation itself. When asked whether he thought truth exists, the Centre’s spokesperson Matthew Coolidge replied, ‘sure, truth exists, undoubtedly. Whether it’s true or not, I don’t know. Maybe it’s better to ask, “Does fiction exist?”’9 CLUI forces us to confront our own complicity in constructing reality.

Once the observer begins to penetrate CLUI’s self-presentation and appreciate its larger project, the natural response is to wonder whether CLUI is a real organisation or a hoax? Is it a group of artists and, if so, is this art? According to Coolidge, ‘art is an idea with a middle, the middle being some kind of consensus-based definition of what it is, from which the rest of the notion radiates out to its fringes, dissipating’.^10 Thus, art too, is simply a function of constructed legitimacy.

Whether or not CLUI asserts their practice should be regarded as ‘art’ (to my knowledge they have not done so), CLUI nevertheless references both Smithson’s notion of ‘non-site’ and Duchamp’s readymade. CLUI adopts both the conceptual agenda of ‘non-site’ — as a representation of a place — and Smithson’s dual persona of tour guide and sightseer. This reference informs CLUI’s emphasis on both mapping and physically locating the site. A day-long bus tour organised as part of an exhibit, Through the Grapevine: Streams of Transit in Southern California’s Great Pass, visited locations such as power plants, water aqueducts and industrial warehouses. The tour emphasised the ‘spaces between’, the non-places in which the sites are embedded and by which they are reached — mountain ridges, bridges, the highway and its various intersections.11 In so doing, the tours force us to retrieve the importance of what is hidden in the plain sight of mundanity. Similar to the consciousness afforded by presenting us with disconnected facts, here CLUI forces us to connect the non-places in invisible structures of meaning. Furthermore, the Centre’s engagement in these marginal, yet coinciding practices — art, sociology and geomorphology — certainly accords with the essence of conceptual art practice. That is, that art is not related to or classified in a vacuum, but as a function of perception and its environment.

Elsewhere, we can observe the notion of non-site at work in Brodie Ellis’s practice. In Super Pit 2008, Ellis presented a complex installation combining documentary video and sculptural works. Ellis interpreted the site of Australia’s largest open pit mine in Kalgoorlie, WA with a video projection documenting the pit, as well as sculptural elements recalling objects from the mine. Ellis’ documentation functions as part of the work’s mimetic engagement with the original site: the sculpture reproduces and decontextualises objects from the mine as shadows of their former selves. Through the use of cardboard, pine, fabric and clay, the mine’s objects are rendered materially fragile and makeshift, thus making a socio-environmental comment on the industrial evolution of the site. Ellis’ work occupies a different space to CLUI by questioning the pursuit of progress at the expense of the environment. It explores human interaction with the land in a poetic, rather than didactic, manner. Ultimately, by projecting the politics of site as an instance of art-as-activism, Ellis’ Super Pit tells us what to see; in contrast, CLUI, through their obtuseness and hyper-neutrality, forces us to confront the constructive process of seeing.

CLUI is less about land than about interpretation. By refusing to explain, by actively disorienting, by pitching the viewer into a landscape of accurate uncertainty, and by abandoning the pretence of factuality, CLUI provide a more honest and ‘objective’ interaction with the land they present, and the world at large. Ironically, to see the world around us, CLUI suggests we view it through a hyperrealist website archive, or a bizarre sightseeing bus tour to remote and ignored locations. As a platform for enquiry and engagement that forces us into collision with fact and fiction, CLUI confronts the viewer with the idea that truth, like art, is a perspectival construction.

Aneta Trajkoski is undertaking a Masters of Art Curatorship at the University of Melbourne.