un Projects is based on the unceded sovereign land and waters of the Wurundjeri and Boon Wurrung people of the Kulin Nation; we pay our respects to their Elders, past, present and emerging.
un Projects
❮
un 5.2

Hundreds of noises wove themselves into a wiry texture of sound with barbs protruding here and there, smart edges running along it and subsiding again, with clear notes splintering off and dissipating … Opening his eyes, he would know the place by the rhythm of movement in the streets long before he caught any characteristic detail.1
— Robert Musil, The man without qualities

I think I know this place well, but, of course, I’ve only ever passed through it on the way to the church’s back door. I’ve never stopped long enough to let Baptist Place be a place. I know it has a long history, mostly notorious. But I see potential everywhere here, especially turning the dead-end lane into a through-route to Collins Street. Unleashing the economics of Collins Street to flood down a little lane would go a long way to opening it up to more activity and therefore safety. As shopping malls demonstrate, the movement economy is a powerful thing. And, after that, perhaps the potential of the space will take care of itself. I have always thought that, in order for Baptist Place to be a place, it had to be cared for by one person, with one consistent aesthetic vision — preferably me. And yet, now that I stand here, spending time in the space, I see that Baptist Place is in fact cared for by hundreds of people and dozens of agencies. They have all contributed to its current manifestation, how it now looks, sounds and feels — the Church, the hotel, the bin collectors, the power, gas and water authorities, the fire and emergency services, homeless people, wealthy people, addicts and their carers — you can see their influence everywhere.

I am a little ashamed that I felt one person could even have that much capacity to fix up such a complex place. I’ll resist the urge to put bluestone paving everywhere, café tables, umbrellas and a plane tree.

Baptist Place appears to have been monochromed. The walls, the windows, pipes, cables, all suffocate under layers of dirty beige. 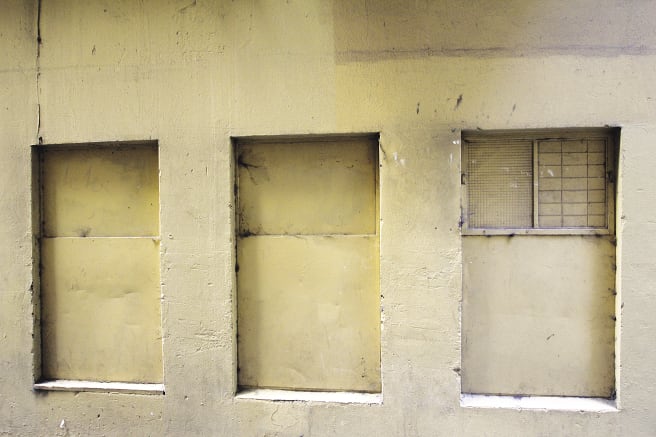 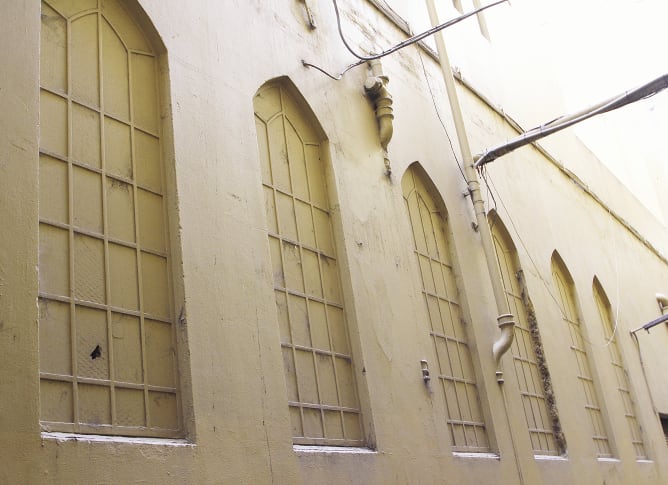 Throughout the Place this sealant has been perforated multiple times and for various purposes, with a particularly strange, laissez-faire approach.

Various impacts seem more like attempts to penetrate this skin, rather than the result of a desire to get inside the building. There seems to be an expectation that in this space there will be dynamic action; objects thrown, careening cars, pipes destroyed, pulled up or ruined, the action of sleeping or climbing. All these actions are traced, anticipated, highlighted and mapped with preventative safety devices. Cages over lights, crash barriers, steel bollards and chains; Nigel teaches me the phrase post hoc, ergo propter hoc — ‘after this and therefore because of this’. A faulty reasoning that justifies interventions without proof that it made a difference in the first place.

The only place I can see any vandalism is the forced security screen that has been ruined instead of fixed. Nestled in the pipes behind it are some blankets left by someone to use later, making the cage both an overstatement and a wreckage. 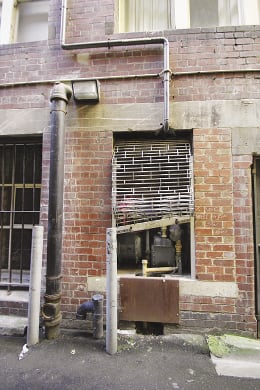 The only other trace of the ever-soanticipated dynamic body is a landscape painting perched perfectly next to the basketball backing board. The game itself is a formal acknowledgement of the body, an invitation to throw, leap and play. But its lack of hoop is mocked mercilessly by the precariously perched painting, and the action that this painting traces is hardly vandalism; in fact, it is far more ordinary and strange. 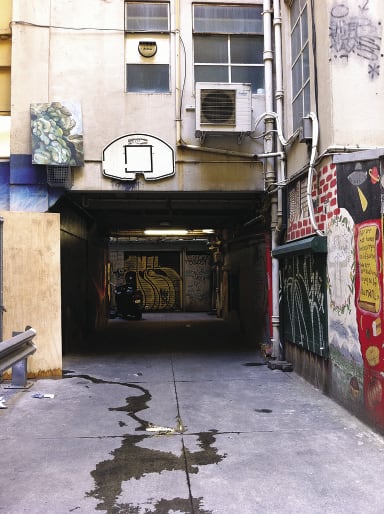 You believe in a palace of crystal that can never be destroyed … and perhaps I’m afraid of this edifice, precisely because it is crystal and forever indestructible … suffering means doubt, negation, and what would be the good of a ‘palace of crystal’ if there could be any doubt about it? … Once you have mathematical certainty there is nothing left to do or to understand. There will be nothing left but to bottle up your five senses and plunge into contemplation.2
— Dostoevsky, Notes from Underground

I’ve never stopped to consider the dark cut between the dispassionate buildings bordering Baptist Place. I go with Nigel for the first time. He knows the laneway, some of its history, the Church. He describes his ideas for refurbishment — one ecstasy exchanged for another. I begin losing air moments later, as I try to navigate the separation of politics … aesthetics … emotions … so that now far less elevating thoughts wash over this place. This space, so exposed to the desires of those who hold the power to alter it, with its Christian nomenclature, its layers of intervention, its massive sharps bin and tightly bolted back doors, its many traces of workers and smokers, and pigeons, and artists, and various charities…

And lying in the corner is a fresh apple core; and a blanket and a lighter stuffed into an alcove.

I realise that the privacy of those who use this place is broken at many points by hotel windows (I imagine hermetically sealed boxes, temperature controlled, and strangers hiding behind curtains). And there is a further blanketing of eyes upon the space by the inescapable presence of security cameras; and a convex mirror positioned behind the church. Is the mirror a gift to manoeuvring motorists, or simply the doubling of surveillance, a commitment to catch every furtive corner?

Attached to a wall of the church building, and missing its hoop, is a backboard for basketball that has had a landscape painting positioned alongside it (compellingly). The wall takes on surprising affects. The white backboard with its black markings assumes minimalist pretensions, as does an air-conditioning unit and a series of windows rising to the height of the three-storey building, framed by various pipes and wires. The pictorial quality of the landscape painting has flooded the space, as though the wall and the surrounding area, the placement of the murals and tags, have all been subjected to the rigorous, universalising eye of the curator. Salon-hang.

A wire cage protecting the hotel’s fire system is shrouding an old mural (a plea not to forget the land’s traditional owners). In a gentle battle of wills, scraps of coloured ribbons have then been threaded through the cage to form an Aboriginal flag, reinstating the mural’s claim to the place. There are signs of other art activities with political intent too: instructions for a city dérive that ended here many months ago, and torn layers of old posters (chance-making décollage), competing painters (muralists, taggers, writers, graffitists) … and messages (warnings) to those whose lives could possibly end here. Be vigilant.

Despite the sweeping (exhaustive) blight of instrumentality, spaces are destined to be contested, poetic. For even when the uninterrupted flow of commerce tries to colonise spaces, expunging their manifest promise, they nonetheless remain hopeful, unstable, partial, always-to-come.