un Projects is based on the unceded sovereign land and waters of the Wurundjeri and Boon Wurrung people of the Kulin Nation; we pay our respects to their Elders, past, present and emerging.
un Projects
⇜
un 5.2 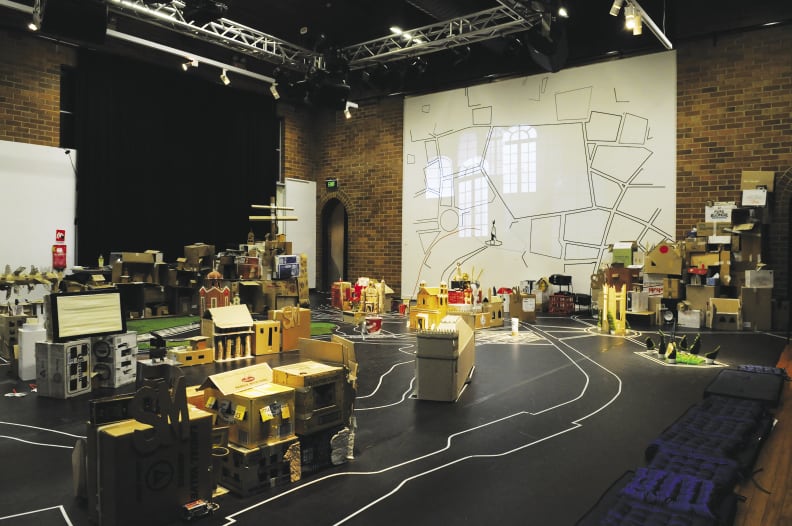 Within & Without was a portrait of Manila. A hybrid theatre work set in a scaled-down replica of the city made from recycled cardboard boxes, it saw a sprawling and chaotic metropolis transplanted into Blacktown Arts Centre in Sydney.

The performance itself was experienced in two parts. The first saw the audience corralled into a circle in the middle of the first gallery space and positioned facing outwards. Blindfolded, they were circled by the sounds of a Manila street. Car horns, yelling street-vendors, animals and bells contributed to an increasingly layered soundscape that gradually grew in volume and urgency. The second ‘act’ saw the audience introduced to the second gallery space containing the fully realised installation of ‘mini-Manila’. At intervals throughout the performance the audience was separated into groups and taken on tours of particular parts of the city, with no audience member being able to undertake the full range of tours.

While the model that the performance took place in was architectural, the thrust of the performance aspect of Within & Without was less to do with built structure and more to do with facilitating and describing the ephemeral human activity taking place within it. This ranged from the everyday — food culture, religious traditions, street crime and tourism — to the far reaching and political — the impact of World War II, conditions under martial-law and the Marcos dictatorship.

Although the main focus of the work was the performance, the cardboard model of Manila also served as an architectural installation in a gallery context, viewable at the gallery for free throughout the show’s season. In Models as Autonomous Agents, Margaret Morrison states:

It seems not quite correct to say that models accurately describe physical systems since in many cases they not only embody an element of idealisation and abstraction, but frequently represent the world in ways that bear no similarity to physically realisable objects.1

When viewed through the lens of Morrison’s critique, it becomes apparent that Within & Without as a whole — both performance and architectural installation — was indeed both an idealisation and an abstraction. The performance element of the overall work was the ultimate model-idealisation: a situation in which the city itself was distorted to allow the people inhabiting it to literally be made larger than the physical environment they inhabit. Individualised against the receding architecture of Manila, they were brought to the fore and able to ‘curate’ the stories and history of that city in a way that suited their purpose. One tour, for example, was to a monument dedicated to a group of boy scouts who lost their lives when their plane crashed en route to a jamboree. The guide, dressed as a boy scout, told of how the monument is now used mostly as a meeting place for visitors to the surrounding area, the tragedy it represents having been subsumed into the cultural life of a city with many such wounds. The idealisation of the situation was, of course, apparent in the fact that it would be unreasonable to assume that such stories could be harmoniously paired with, or easily kept alive within, the physical reality and complexity of Manila. Like the work itself, the history of Manila represented in Within & Without was, necessarily, incomplete and obscured.

The abstraction of Within & Without rested in the reduction of an entire city to a cardboard installation that fitted in a gallery space, a form that omitted almost all the complexities of the original system’s physical reality; how the city operates as an organism. Despite this, the installation still seemed capable of reinforcing the performance’s description of the ‘schizophrenic’ nature of Manila, a city in a constant state of flux — like most cities, a work-in-progress. Within & Without, like Manila itself, had no single thread on which to string a cohesive narrative. Comprising so many different elements, it was nearly impossible to grasp the full meaning that lay behind it. As a portrait of a city, however, there are few other ways that it could have been.

Hugh Nichols is a writer and editor based in Sydney.