un Projects is based on the unceded sovereign land and waters of the Wurundjeri and Boon Wurrung people of the Kulin Nation; we pay our respects to their Elders, past, present and emerging.
un Projects
⟸
un 5.2 Interior Architecture brought together eight very different artists who employed a range of processes and materials in their exploration of the body in space. What was refreshing about this exhibition was the fact that architecture was examined in relation to the lived body of the artist. Since contemporary discussions about architecture tend to either explore its relationship to media or (more concretely) the built versus the natural environment, it was significant that each artist instead examined architecture in the context of their personal experience of space.

Surprisingly, this turn to personal space did not result in a visually disjointed show. The works instead complemented each other. There were the shared hieroglyphic configurations of Kate Just’s and Julie Shiels’s installations, where a series of sculptural forms invited symbolic — or at least metaphoric — inquiry. There was also the shared suspension of Clare Rae’s and Timothy Kendall Edser’s bodies in their photographs; the shared grey tendril in Caroline Phillips’s foam sculpture and Catherine Evans’s inkjet print of the neck of a dead swan; and the shared box-like configuration of Inez de Vega’s metal cabinet (opening onto her video) and Mark Friedlander’s sculptural cubes (opening onto his hallway). Above all, the works shared a minimalist aesthetic. It was only the red threads encased within Shiels’s resin and the coloured tights that Rae wore in two of her photographs that moved us outside the predominance of white, black and grey.

Within this apparently cohesive minimalist setting, contradictions and contrasts between works emerged. The poetic fragility of Evans’s inkjet print, propped on the floor, saw the curved sway of the swan’s neck fall into a small sculptural cone of molten clay. This contrasted, most obviously, with Friedlander’s low line of heavy steel squares which literally blocked and bound space, suggesting not just physical entrapment but forcing the viewer onto the floor in order to look through it. In a similar fashion, the arresting bleakness of de Vega’s black and white video animation, which showed roughly sketched figures linked by a confronting, first-person dialogue about institutional mental health care, was exhibited on a flat screen within the top drawer of a scrappy, medical-type filing cabinet. Such rawness ran counter to the symbolic animation of Just’s polished black keys stretching, almost whimsically, across the white gallery wall. Even small details vied with each other: Shiels’s red cotton, twisted imperfectly with cotton-wool and held within the moulds of keyhole surgical tools, contrasted with the vertical pull of the wires holding Edser’s body in its own ‘medical’ mould. Finally, Phillips’s hanging grey strands were pulled into a trio of entwined ponytails near a corner of the gallery. This work, recalling at once the disordered nonchalance of girlhood and domestic divisions (the curtain, the blind) contrasted with the scope and scale of Rae’s more childlike and physical measurement of interior domestic space. 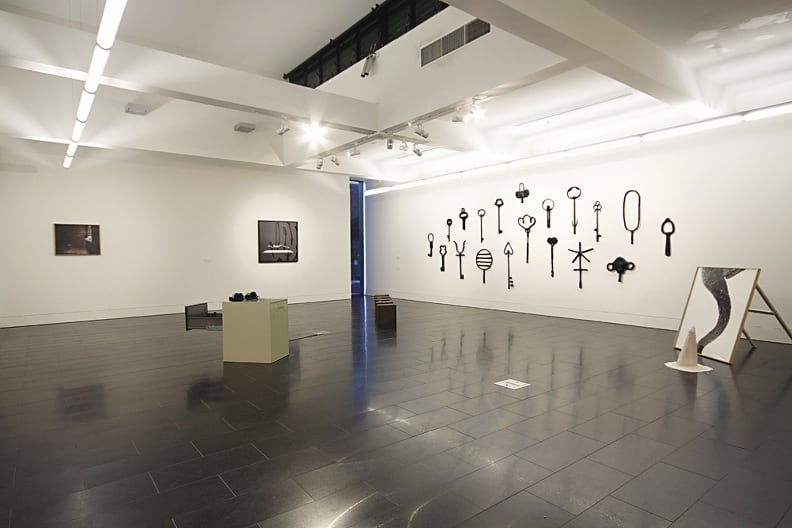 Because of this contrast between works, I was forced to keep negotiating and shifting my interpretation of what an ‘interior architecture’ might actually be. Was it a mythical or medical interior? A playroom or a space that could only be spoken? Was it a grown-up space or a space we might still grow into? Was I looking back or looking in? Could I scan a horizon? Was there an outside? What was I asked to feel?

Clearly, these questions indicate that Interior Architecture did not define ‘the interior’ or ‘architecture’ in a concrete or cogent way. I actually quite liked this: realised in this mix was a phenomenological discussion about meaning being spatially and temporally embodied by a subject who lives in a specific place and time, and who has, therefore, to negotiate other bodies often in conflict with her/himself. In her opening to Carnal Thoughts: Embodiment and Moving-Image Culture, Vivian Sobchack states that ‘however direct it may seem, our experience is not only mediated and qualified by the lived bodies that we are, but our lived bodies (and our experience of them) is always also mediated and qualified by our engagements with other bodies and things’, reminding us of what she calls our ‘historical and cultural asymmetries’.1 How we make sense of the world involves not just content and form, space and structure, but our capacity to engage descriptions of phenomenological experience that are not our own. To do this, we do not need to share that experience but have it described in a manner that resonates with, and is comprehensible to us. In this context, I would argue that it was the clarity of artistic difference — more than a shared minimalist aesthetic — that held Interior Architecture together.

Victoria Duckett lectures at the Centre for Ideas, Victorian College of the Arts and Music, University of Melbourne.