un Projects is based on the unceded sovereign land and waters of the Wurundjeri and Boon Wurrung people of the Kulin Nation; we pay our respects to their Elders, past, present and emerging.
un Projects
⇽
un 5.2 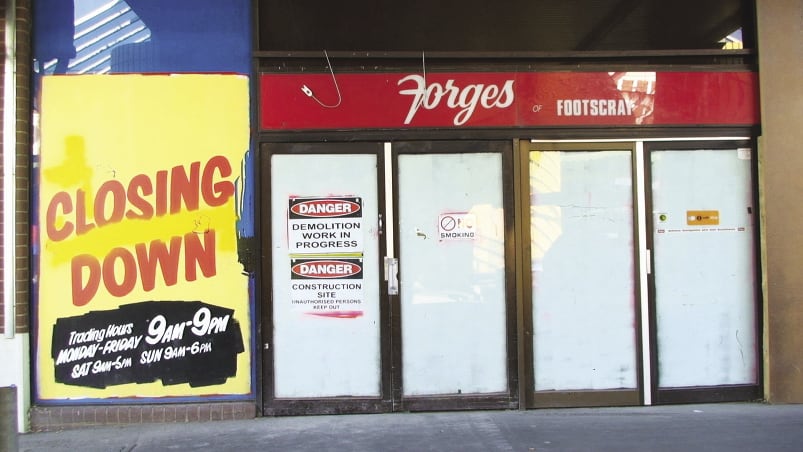 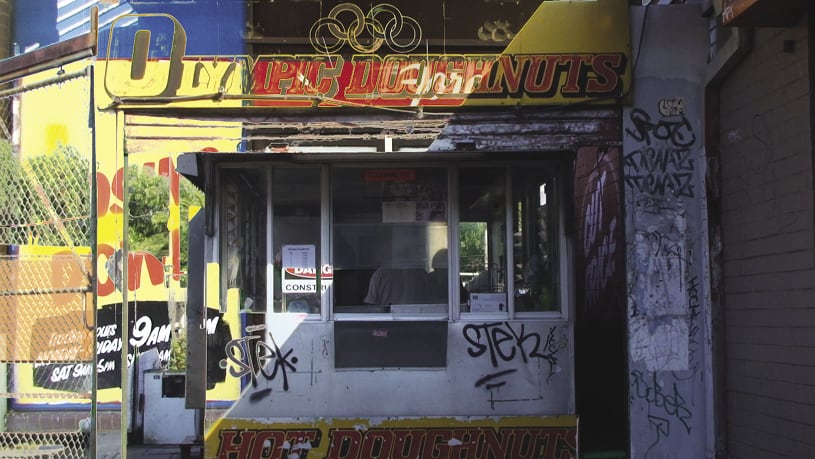 Footscrayism was one of three exhibitions produced as part of New Skin, a key outcome of the artist-in-residence program at Footscray’s Barkly Arts Centre, which required each artist-in-residence to utilise community involvement in their individual projects. Untangling Footscrayism from its various affiliations and related events, and reviewing it as a self-contained exhibition, is partly at odds with this multi-faceted and constantly evolving community-based program. This forced separation may, however, provide a point of access into the wider program, while also allowing the work to be understood within a cultural framework that is not circumscribed by the values and mission of the sponsoring institution, The Western Region Health Centre, which centres on community participation and well-being.

Process was central to Footscrayism: rather than document the local community, the project aimed to facilitate artistic outcomes through exchange and interaction. Certainly, the location of the gallery within a community housing complex inscribed the exhibition within a specific community more overtly than most galleries. In this context, the practice of British conceptual artist Stephen Willats was a clear precursor. Footscrayism adopted his definition of art as a communication strategy that can transform the perception of the physical and social environment for both the communities involved and the audience at large. It also followed Willats in the use of community participation and interviews as both a primary research method and artistic output, as exemplified in The Hand that Feeds Footscray, a documentary by artist-in-residence and exhibition curator Jessica Scott, which was both the physical and thematic centre of the exhibition. This gave voice to people involved in Lentil as Anything, a local ‘pay what you feel’ restaurant. As the video made clear, the provision of affordable food is only a minor element of ‘Lentils’, which offers training, friendship, support and a sense of community; values that overlap with those motivating its neighbour, the Barkly Arts Centre.

Surrounding the monitor displaying the documentary were grids of street photographs taken by three artists who work at Lentil as Anything under Scott’s mentorship. The photographs were dominated by the subjects that have formed the nexus of street photography since Walker Evans’s American Photographs 1938: portraits, street façades, billboards and seemingly banal local architecture. With their details of signage and streetscapes that capture unaware passers-by, Billie Whitbread’s photographs most clearly fitted into this lineage. In urban portraiture, the quest for the candid has tended to separate the photographer from their subject. As a result, such photographs also convey the idea that ‘the stranger’ is the defining figure of the urban environment: one who is spatially proximate but socially distant.1

Josh Howie and Johanna Lafferte’s photographs reversed both of these generic tropes. In most of their images the subjects were clearly aware of the photographer: posing, looking at, and engaging the artist. Lafferte’s portraits were predominately taken inside or in the immediate vicinity of Lentil as Anything, a context where spatial proximity translates as social proximity. Guided by a tighter concept, all of Howie’s portraits presented people involved in the ‘Lentils’ community standing in front of local graffiti and looking directly at the camera. In stark contrast to the determinism often associated with the institutional organisation of public housing, Howie and Lafferte’s contributions presented, even manifested, the potential for symbolic intervention and creative self-organisation; transforming the streetscape into a space of connection rather than alienation.

The streetscape is a space successively remade: subject to erasures, development and reimagining. This is the key theme developed in Scott’s video Olympic Doughnuts 2011. Through a complex series of dissolves and cross-fades, the viewer observes a constantly evolving series of building façades in Footscray which have been recently developed or are potential development sites. Scott’s lingering shots of Footscray’s vanishing streetscapes recall Analogue 1998–2007 by American artist Zoe Leonard, an encyclopaedic photographic documentation of vernacular architecture, local retailers and services disappearing from New York City. Using a vintage film camera, Leonard’s process formally embodies her project’s attempt to hold onto a slowly fading ‘analogue’ world. The text accompanying Olympic Doughnuts points to a similar concern, with Scott lamenting the changing socio-economic and cultural shape of Footscray. Yet the video itself does not dwell on such loss. Instead, its formal qualities are produced by digital editing techniques and present the city as a constantly evolving surface prone to economic shifts, patterns of migration, and trends in urban planning and architecture. As each street scene is slowly written over by the next scene, the streetscape takes on the form of a palimpsest; subjected to erasures and new interpretations, yet always leaving traces of the past.2 Olympic Doughnuts is not a simple critique of gentrification, instead presenting the urban environment as defined by the processes of change.

Images of closing down sales and boarded-up buildings have traditionally signalled economic collapse. In Footscrayism, however, such images signified the economic vitality of the area, with older businesses making way for new developments. Indeed, Footscray has been earmarked by the Victorian government as one of six ‘Central Activity Districts’ to receive focused investment and state planning, and the area is facing rapid change.3 Amidst this context, Footscrayism attempted to affectionately preserve a moment in time in the history of the suburb, to simultaneously capture and further perpetuate the community’s solidarity.

1. This social definition of the ‘stranger’ comes from George Simmel, ‘The Stranger’, in The Sociology of Georg Simmel, Free Press, Glencoe Illinois, 1950, pp. 402-408.
2. For Henri Lefebvre this simultaneous interpenetration of various historical moments within a singular space is a crucial characteristic of the city: ‘No space ever vanishes utterly, leaving no trace. Even the sites of Troy, Susa or Leptis Magna still enshrine the superimposed spaces of the succession of cities that have occupied them.’ The Production of Space, trans. Donald Nicholson-Smith, Blackwell, Malden, 1991, p.164.
3. Melbourne 2030: A Planning Update: Melbourne @ 5 Million, Victorian Government Department of Planning and Community Development, East Melbourne, 2008. Available online at www.dpcd.vic.gov.au/melbourne2030; Melbourne 2030: Planning for Sustainable Growth, Victorian Government Department of Infrastructure, Melbourne, 2002. Available online at www.melbourne2030.vic.gov.au.

Kyle Weise is a writer and curator, currently undertaking a PhD at the University of Melbourne, and is co-director of Screen Space and Beam Contemporary galleries.