un Projects is based on the unceded sovereign land and waters of the Wurundjeri and Boon Wurrung people of the Kulin Nation; we pay our respects to their Elders, past, present and emerging.
un Projects
˂
un 5.2 Hélène Frichot : On Tuesday much of Christchurch abruptly collapsed to the ground. The Cathedral lost its steeple. Closer to home, and all that summer, the eastern seaboard had been inundated with water. Dislodged interior furnishings were adrift down erstwhile suburban streets. Wild winds assailed coastal towns and from time to time the smaller settlements in the hills were razed by fire. Some ten years ago now the family home succumbed to wayward flames. She walks its ghostly perimeter attempting to revivify the architectural corpse. Where there was once floor, now there is ceiling and remnants of rafter. Where the roof once proudly kept at bay the forces of inclement weather, there is now only thin air. It is a radical redistribution of materials.

Adrien Allen : The juxtaposition was familiar. That I could move freely between two separate states within a single interior was less familiar. It was not the same as moving from one room into another, as built demarcation in the form of a wall or door did not exist. Instead the floorboards changed direction and the ceilings were different. The interplay was essentially architectonic, but also suggested bicameral distinction.

Bridie Lunney : There is no room left for your body here. The roof is below the foundations, a subtraction of space has occurred. You have to muscle in. Using your body as a tool for leverage you recreate space by replicating the architecture through gesture. Circling the perimeter you enact a vigil, psychologically replacing the walls, creating control where there is none. 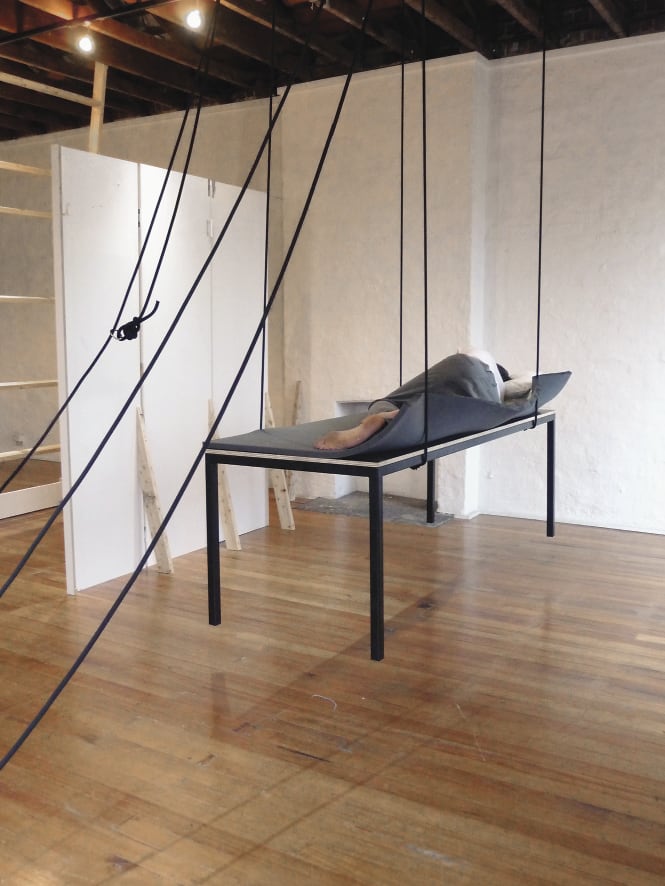 The ability of the interior to house and define now retreats, another figural possibility proclaimed: the point of change. How thick or thin was this point? How long did it take for me to pass through? An existence entirely framed through parameters.

“To ensure survival, to be a strong house, to offer protection, to offer a habitat. An armour belonging to the crypt and the ark.”1

The alchemy of Nature subverts architecture. You ineffectually attempt to barricade yourself against it. The familiarity of internal spaces becomes overwhelmed by elemental forces from the outside, making transient your ideal of located places. All you are left with are remnants; a transformation of substance that in the aftermath finally comes to a point of stasis.

It is not all sad passions, but joys too, for this destruction is also suggestive of constructive possibilities, and potential spaces awaiting activation by sensate bodies. Architecture produces the first frame. As the first principle of shelter it prepares the possibility for the expression of all the other arts.

I didn’t find it, although I understood it first as a found object. I didn’t envisage a studio, or a showroom. I imagined a refuge and dreamt the building’s interior into a perfectly formed work that required nothing external introduced into it. It was the stumbling across and then the choosing. “Despite the weight they are not founded, they float on a ground that offers little balance. The ground is a moving and random expanse more akin to the ocean than any idea of solid lodging. The structure has no real foundation into the earth.”^2 The deconstructed site is thrilling, allowing for the visceral dismantling of the myth of the permanence of architecture. Such a site undermines rules that seek to prohibit attempts at modifying the organisation of space. And space falls away. There are no longer ceilings, walls, floors. No structure to hold the body in place. All is light and air and the ability to begin again. The site becomes a place for projected hope. Liberating itself from its designated constraints, it becomes a site of possibilities.

The ground is then rarefied sufficient for a performance, perchance a dancing body, or even a sleeping one. His face might be covered in soot or sand, fast asleep, dead asleep. His body is much lighter, huddled on a table, suspended in the air, counterbalanced by a weight of building debris. Meanwhile, she walks down walls, likewise counterbalanced by the ballast of building. Taut ropes keep her there, aerially improbable.

Perilously close to the sweeping arc of his raised feet was an interesting sculpture that appeared to be robust materially, but wasn’t. The artist, having neatly appropriated high modernist aloofness, made the sculpture appear to claim more ground for itself than it actually occupied. Taking the form of a polystyrene foam rock attached to a plastic chain, in turn tethered to a plastic pole, it was both cartoon and monolith. At that moment however, I was to witness its brief transformation into a missile whose journey was to be truncated by its own logic.

What is the weight of architecture?

There is a proliferation of materials on site. They stand on the periphery full of potential energy, creating their own dialogue of relational aesthetics. While dormant, you imagine the materials into their reconfigured place, a drawing in space or a mind map of how they will eventually fit together. Matter here is not inert but speaks for itself and of itself, while you make connections to create content. You tease out a matrix of relations of materiality that excite their potential for variable states. Here is your affective entry point. You become a creative participant through engagement. Thinking the city into being.

Slow Burn: my emergent thing that has come into being over a period of time, a measured devolution, or continual oscillations. Not specific moments articulating a history, rather a cumulative layering of cusps that overlap, abut, giving rise to memories.

Architecture does not stand inviolable; it is apt to crumble with decay and disaster. Its material is not inert but live. Perhaps the origin myth of architecture misleads us: The first architecture is not the frame that composes the primitive hut, the home, the temple or the tomb, but the prison that constrains us, issuing orders and interdictions. Architecture constrains us to behave in a certain way, and the museum, temple to art, forces the audience to be especially mindful.

But what happens when the gallery becomes a deconstructed site? The solidity of the display case is ruptured. It is in a state of transition — a reconfiguration of internal spaces and sight lines. In this state of limbo, the art can conceal and reveal itself by mimicking a pre-existing language of deconstruction. Objects elude a fixed meaning; rather there is transference between each element. It is within this instability that the work arises.

What’s more, the audience is not allowed the opportunity to maintain a disinterested gaze. We are co-opted into the action, we share the stage, human and non-human actors alike, animate and inanimate, mediated and unmediated.

In favour of a mutual exchange. A plethora of forces.

Once we recognise that architecture is as much a leaky, fragile, finite body as the intimate body we know best, and habitually claim sovereignty over, a promising opening appears between the two. Small acts of domestic disobedience suggest themselves, why not sleep on the table and walk down the wall? New and animated relations of architectural body and human body emerge. These are our precious, experimental joys. It is a matter of challenging the limits of architectural suspension.

The body has the ability to subvert architecture with the simplicity of an inverted gesture. No need for major reconfiguration. You only have to walk down a wall. This is not an attempt at illusion. The body is tethered to the physical constraints of the building and by the poetry of the weight of water. You are outside the bind of spatial and temporal rules, creating an alternative version of reality by shifting it 90 degrees. It is now you who are liberated from your habitual designation, while the gallery becomes a testing ground, creating new layers toward the beginnings of a reconstruction.