un Projects is based on the unceded sovereign land and waters of the Wurundjeri and Boon Wurrung people of the Kulin Nation; we pay our respects to their Elders, past, present and emerging.
un Projects
<
un 12.1

Beyond Remembering: The Role of Memorialisation in Decolonisation

‘Did you know Barangaroo is named after a courageous and spirited Aboriginal woman?’ So says a section of the Barangaroo website titled ‘The Stories’, the question posed above an aerial image of a glass-walled building. Barangaroo is an urban redevelopment on the harbour of what is currently called Sydney; a place where the ‘past meets the future’ and ‘Traditional Custodians’, including Eora woman Barangaroo, are acknowledged through use of their names as well as images of their likeness. The site features artwork from artists such as Bidjigal/Eora Elder Esme Timbery, Kamilaroi man Reko Rennie, and Wiradjuri/Kamilaroi man Jonathan Jones. Inside the sandstone that borders Barangaroo Reserve a multimedia artwork Barangaroo Ngangamay, developed by Worimi artist Genevieve Grieves and Amanda Jane Reynolds, plays as a tribute not only to Barangaroo but also to all ‘Aboriginal women and their diversity and strength’.1

Many of the Elders and artists involved in this memorialisation of Barangaroo speak of their desire to remember and honour our people and our culture in such a public space. But the issue remains that their work, while strong in its reflection of each artist’s culture and practice, are used to support and legitimise the development of an international property group, Lendlease, built on unceded land of the Eora nation. One can only wonder what Barangaroo would think of her image and story, based on colonial recordings, being used to prop up commercial buildings and a casino built on the land of her people. It raises the question – who is really benefiting from the remembrance of our ‘warrior woman’?

Memorialisation is becoming increasingly common across Sydney, most of which surrounds the harbour, the jewel and centrepoint of the city. Aside from Barangaroo, Bennelong Point also bears the name of an Aboriginal person, while ferries that cut across the water are named after Bungaree and Pemulwuy. From one perspective, these naming processes could fall into the fifth step of colonisation suggested by Professor Virgilio Enriques while in conversation with Hawai`ian activist and attorney Poka Laenui. According to Professor Enriques, the fifth and final step is transformation and exploitation, with Indigenous peoples and cultures adopted by the dominant culture to gain economic and social capital.2 As Laenui explains, in this stage ‘[t]he traditional culture which simply refuses to die or go away is transformed into the culture of the dominating colonial society.’^3 The honouring of our ancestors in this way may not strike as negative or offensive, particularly when compared to the deficit storytelling surrounding Aboriginal people in this country, described by Waanyi writer Alexis Wright as a narrative of ‘foolishness’ or stupidity.4 But images like the one of Barangaroo is palatable, a ‘warrior woman’ who exists without any mention of the invasion that necessitated the extroversion of her courage and spirit. In this telling, the colonial narrative remains undisturbed. Like a bowerbird, the state picks the shiniest parts of our people and culture it can find and twists them to legitimise the reinforcement of the state’s place and power on this land.

This is not to say that memorialisation of Aboriginal people will only feed into dominant narratives and structures that are of little benefit to us as a people. Rather, when we do have control over how stories of our ancestors are told, nuance and context are integral elements of the portrayal. Bundjalung artist Djon Mundine OAM attempted to pull out and weave together these threads in his curation of the exhibitions Bungaree: The First Australian* and ‘Bungaree’s Farm’. The sixteen artists involved in the exhibitions were tasked with critically examining and interpreting the life of Bungaree, with a broader aim to address questions posed by Mundine: ‘How do we remain Aboriginal in our dominant Australian culture? What does being Aboriginal mean? What do you wish for?’5 While Bungaree may have been called ‘Chief of the Broken Bay Aborigines’ in historical documents and paintings, the artists did not give him a simple glowing, two-dimensional presentation. In his statement accompanying his work, Dhungatti artist Adam Hill, also known as Blak Douglas, describes Bungaree as ‘the foremost “Jacky Jacky” and ‘the first ‘token “Black”’,6 a man who attempted to walk between his world and the world of the invader. Hill’s interpretation of Bungaree is a man confined, stuck on a path away from his people and into the void of history. Striking a different tone, Gamilaraay and Wailwan artist r e a used her work to lend compassion to Bungaree, a person she saw as ‘placed in a difficult situation’ by the world-shattering effects of invasion, a brother-man ‘judged perhaps harshly by others’.7 By making their assessments, Hill and r e a both reckon with what is asked in Mundine’s essay accompanying the exhibition: ‘What is good or bad in Aboriginal morality? Who is to judge?’8 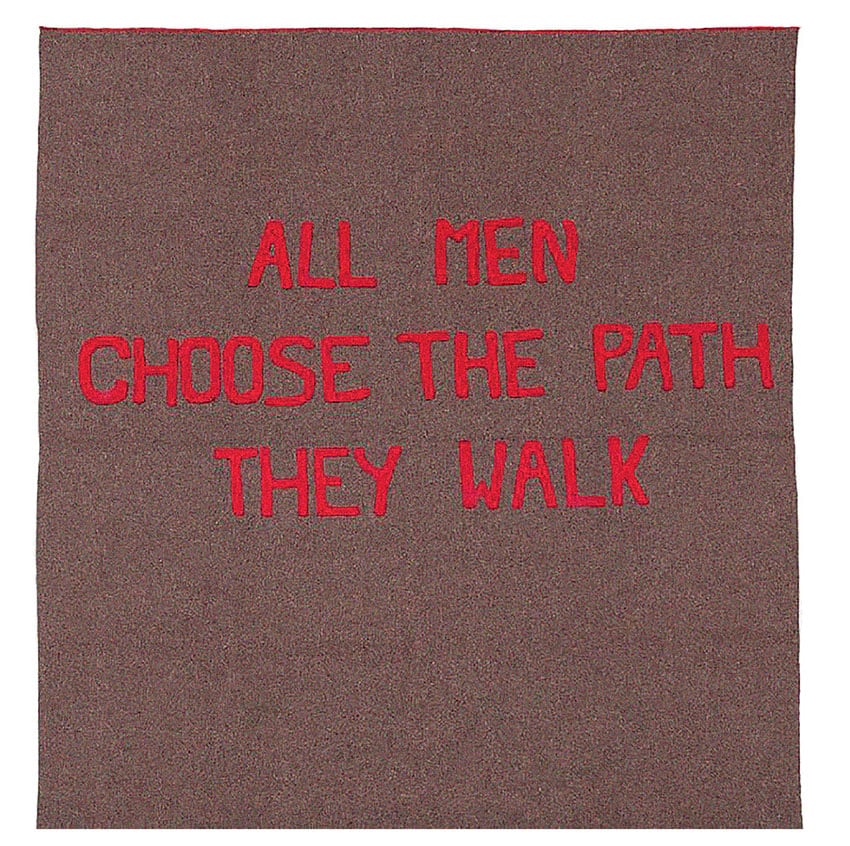 Badtjala artist Fiona Foley’s piece All Men Choose The Path They Walk also speaks to the Bungaree’s world-crossing decision – in the context of death and disease of those around him – in order to engage and mediate with invaders. Foley’s work does not attempt to account for Bungaree’s actions – an impossible endeavour – but acknowledges the agency of Bungaree in making his choices, an agency that is not often ascribed to First Nations people in post-invasion art, or in general. We are not sheep being lead to slaughter – for better or worse, blak figures know what they are doing when they support the state’s actors. They have their reasons, even if they may be misguided. But that nuance and complexity – a very human essence – should be afforded to us as much as it is to anyone.

Both exhibitions raised the question of how we tell tales through art, particularly when they are guided by colonial documents, and when, as Wright put it, ‘it is almost impossible to get the story straight’.9 While the Bungaree exhibitions did have a focus on written recorded histories of the Sydney area, with the artists assisted by historian Dr Keith Vincent Smith, Mundine also wanted the artists to engage with Bungaree’s emotions, as ‘Emotions are facts’.10 Foley acknowledges the role of imagination in her assessment of Bungaree, noting that ‘[g]limpses of Bungaree from historical records are largely missing in any real detail about the true nature of the man’.11 But perhaps the truth of who a person was is not important; as Linda Tuhiwai Smith wrote in her text Decolonizing Methodologies, ‘a thousand accounts of the “truth” will not alter the “fact” that indigenous peoples are still marginal and do not possess the power to transform history into justice.’ 12 By filling in what Edward Said called the ‘archival gap’13 created and used to maintain colonial power, the works attempt to challenge narratives that entrench violent systems, and to strengthen who we are today by acknowledging all of our complexities. This may be what Gamilaroi artist Caroline Oakley meant when she called art ‘the collective information that is hereditary from one generation to another’.14

While the Bungaree exhibitions may form part of an effort to reclaim our histories, if we define decolonisation as an effort for ‘the repatriation of Indigenous land and life’15 it is difficult to see how ‘memorialisation’ artworks sitting inside a settler-owned gallery and funded by government money, or attached to a commercial development, advance decolonial efforts. Do these works have the capacity to be more than just static objects that resign First Nations people to ‘history’ and create space for ‘settler futurity’?^16 A continuation of stories is only one avenue of resistance, and one that is perhaps easiest for settlers to engage in, particularly when compared to ‘the more uncomfortable task of relinquishing stolen land’.17 This may be why memorialisation is so prolific in urban spaces, where land is an immense source of capital, as it has been from nearly the precise moment of invasion.

So, as Gomeroi writer and legal academic Alison Whittaker wrote in her essay ‘Acknowledgment’, we as Aboriginal people ‘need something other than just remembering.’ We must move from awareness of our ancestor’s legacies, shrouded in doubt and vaguery as they are, and into a state of action. What does this entail? Whittaker continues: ‘[w]e assert our being in ways that continue to weave on, both despite white contact, and without it.’18 There is a place for asserting ourselves and our ancestors as the complex and multi-dimensional beings we are, but that assertion must be intertwined with a refusal to be enveloped or assimilated into the colonial project, and direct action pushing against the structures that refuse to accept our ongoing presence and inheritance.

Ellen O’Brien is a writer, poet and legal researcher of Guringai descent living on the unceded lands of the Eora nation.