un Projects is based on the unceded sovereign land and waters of the Wurundjeri and Boon Wurrung people of the Kulin Nation; we pay our respects to their Elders, past, present and emerging.
un Projects
⇷
un 12.1

beyond rewriting the story achieving Indigenous sovereignty through Virtual Reality

Our knowledge of land as its own technology is second to none. Two hundred and thirty years of adapting as necessary, often as lives depended on it, has seen us turn to other mediums. We used the tools that arrived on boats. Our storytellers use English in literature, cameras in photography, film and many other media across a range of platforms. Cultural practices continue through story, and in some cases are repaired, protected from disappearing. Indigenous-made Virtual Reality (VR) projects build on the legwork of artists and storytellers, offering a place to see and be ourselves. Through digitally rebuilding colonised spaces, we have the opportunity to take pride in and reclaim lifeworlds that were taken and create new ones starting from scratch. In these worlds made of zeroes and ones, we can claim sovereign space.

At Indigitek in November 2017, a gathering of mostly Indigenous tech workers, University of New South Wales PhD candidate Rhett Loban presented a prototype Virtual Reality game about the Torres Strait, which he created using family knowledge about plants, animals, folklore and astronomy.1 Together with his father and respected Elder, Loban worked with an innate level of sensitivity and care with representation. Nothing secret or sacred to be shared. Loban was asked by a non-Indigenous crowd member ‘but what is the point of the game?’. The question made me laugh. For those of us who have lost language, knowledge or land, the game in and of itself is so valuable. Creating this world and giving the user a sense of agency within the story; re-creating what has been lost is extremely important for those of us whose lived experiences were taken away.

If culture is to be a lived, felt experience, I want it to be my lived experience first. I want to learn my language, have my own sense of agency with knowledge, stories and mythology creation; have a narrative that falls outside colonisation. Tempting, this idea of creating a Virtual Reality where we could re-present Wergaia Country, without or before white people’s interventions.

I asked Loban about the timeline for his VR game, if he envisioned it before colonisation. Certain details like modern boats and houses bring the game into the present day. But with ‘mythical creatures and beings from Torres Strait stories depicted in the game … there are elements of pre-colonial knowledge, history and stories.’ On history, gathering the knowledge allowed him to learn a lot from his father.2

Even though the desire was to create an immersive experience that explores Torres Strait Islander culture, the development process in and of itself became another form of preservation. Celeste Carnegie, the learning experience designer and lead facilitator at Writing for Indigenous Digital Excellence (IDX) put it
this way:

We have to use our innate innovative knowledge as Aboriginal and Torres Strait Islander people to forge our own pathways and opportunities into Steam fields that
can in turn be passed on from generation
to generation.3 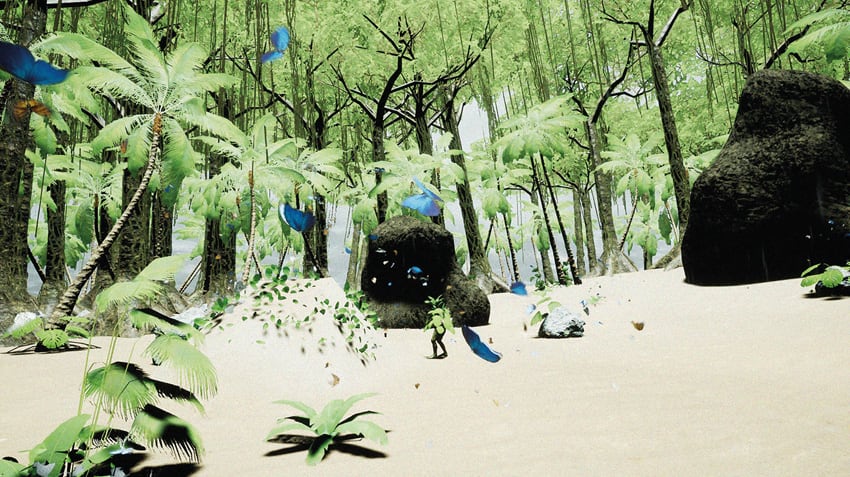 Armed with tech skills and agency, Indigenous developers are imagining a more utopian present-day coexistence with our colonisers. Create spaces for healing where language can be taught, culture and country can be preserved. After so long appeasing and adhering to settler rule, technology now allows us to centre our own ways of being and doing. Become more. Take pride in our excellence. With the potential to build completely from scratch, Virtual Reality also allows us to reimagine ourselves as anything, including things colonisers never thought us capable of.

Tyson Mowarin, one of our foremost digital storytellers has been paving this way for a while. In addition to his many projects that digitise language and knowledge such as the Welcome to Country iPhone app, Mowarin is collaborating with a Perth-based digital agency to create a Virtual Reality game, centred around his own community on Burrup Peninsula.4 Unlike Loban’s realistic protagonist, Mowarin’s character is an Indigenous miner by day and warrior superhero by night. Imagery of this game blurs lines between Country as it is and Country seen through a supernatural lens. Knowing the land as he does, he is incorporating traditional knowledge and tech to push the boundaries of what is expected of Aboriginal people.

If we empower ourselves with the tools — whether enabled by a program such as IDX or a digital agency — we can create a new reality on our own terms. It goes beyond rewriting the story. It might be digital, but it’s where we can become our most autonomous and sovereign selves. I saw myself there. Blurred reflection in shiny floor, pooling beneath the projections. Waves from Tai Whetuki - House Of Death Redux hit me over and over again. The black and white film turned watery and luminous in the floor below. Figures move shadows both in front and underneath. I was crouched on the floor, for stability but also to get closer. Allowing myself to find the ground, to lower myself in. In this film, a Tahitian Chief Mourner seeks his death place. Hinenuitepō, the goddess of death, shows him the way. I touch my hand to the ground to steady myself. Knees and palms on the floor, I am haunted by this piece, I feel the mythology, I am part of the story.

Lisa Reihana’s Cinemania at Campbelltown Art Centre is her first Australian survey and showcases three decades of video and photographic work, featuring Tai Whetuki and the better known panoramic video in Pursuit of Venus [infected]. Video pieces can go one of two ways: quick glance and a momentary pause, or a head-on collision that knocks you out of your reality, immersed. Cinemania is the latter.

in Pursuit of Venus [infected] ‘reminds us history is a construction’.5 A re-presentation of the colonial wallpaper Les Sauvages de la Mer Pacifique, it presides over an entire room, images moving, curving past, projected onto what seems a large scroll. Beyond the sickness of the wallpaper’s ongoing motion, I am nauseated by what is playing out. The inevitability of what I am seeing, and this simple and helpless act: to watch. Standing there, I waited for the scene in this wallpaper that could explain why the red and white clad invaders felt they had permission to settle at all.

What would our frieze look like? When those boats landed, what songs were being sung? It would have been early 1800s by the time my ancestors saw wudju-gurg on Wergaia country, being safe enough inland. Maybe they had heard of them from Wiradjuri travelling down south. But like the oldfullas there in Pursuit of Venus [infected], we didn’t know exactly how it would turn out, just yet. Back on the wallpaper, tension builds as sound revolves, conflict between settlers and First Nations escalating. Hard to look away. Hard to take it all in. Hard to know you could get up and leave. At least in this space it will rotate back towards the beginning before colonisers arrived.

I collided with something deep at that Cinemania. Struck down and plunged into my own narratives about culture, I wondered: what if Reihana’s films could simulate physical as well as emotionally immersive experience? My experience was close to physical already, but to put a headset on and walk with Hinenuitepō, take her hand as she leads you to rest would make it complete. Dance with Maori, Pacific Islanders and Dharawal on the islands in Pursuit of Venus [defected]? It could be so much more. Thinking on the value of deep emotional and physical immersion, Virtual Reality could allow First Nations people significant cultural experiences that take us to another place, or time.

When the aim is to visualise ourselves, whether it be as a traditional knowledge holder, a land owner, or surpassing settler expectations, digital spaces become cultural reconfigurations. Lisa Reihana’s Cinemania revisits and recreates stories told in fibs by the coloniser and allows her to make them her own. With our ongoing struggle for recognition and reconciliation in the real world, digital storytelling’s emphasis on control is well needed. Through technology, First Nations people make an uncolonised world virtually real.

Susie Anderson is a writer and lives in Sydney.

4. Tyson Mowarin showed video footage of this game in development at Indigitek, June 2017.