un Projects is based on the unceded sovereign land and waters of the Wurundjeri and Boon Wurrung people of the Kulin Nation; we pay our respects to their Elders, past, present and emerging.
un Projects
˱
un 12.1

The quiet need no defence 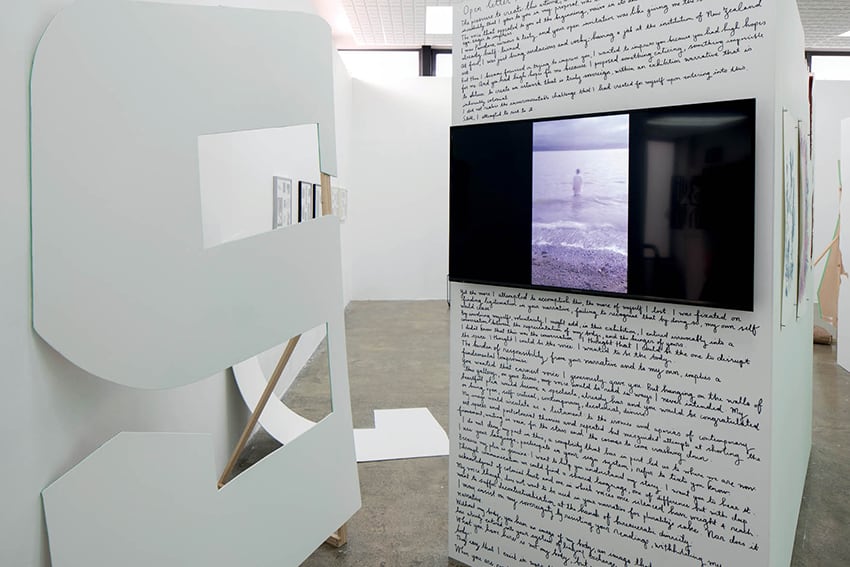 The globalised art community’s recent wave of interest in Indigenous2 methodologies represents a positive shift of consciousness in arts. To date, this interest can be observed predominantly through arts programming. However, as such projects are spearheaded by Pākehā3 curators whilst the bulk of efforts to diversify these spaces lie in the art and theory of Indigenous practitioners, these efforts become exploitative at their core. Within this framework, there also seems to be an unspoken expectation that Indigenous artists should create content that fits within a ‘decolonising’ narrative, with Western curators and audiences frequently associating Indigenous artists with declarative expressions of identity and politics. Despite the best efforts of contemporary Pākehā curators to decolonise spaces, what results is often a recurring tokenistic representation of the Indigenous body. ALL Indigenous people should be able to define the terms of their own self-criticality, not just the elite.

One could argue that the archetype we have come to recognise within the arts, as the ‘Indigenous’ artist, is explicitly involved in politics with their primary goal being to disrupt the white cube. In recent times, this type of Indigenous artist has evolved to embrace pre-colonial Indigenous ways of life and reject colonial systems but inevitably having to do so within a traditional Western framework. In seemingly stark contrast, there are quiet artists. These artists of Indigenous heritage are either disconnected from or barely resemble what is traditionally known as an ‘Indigenous’ artist. They are typically more engaged with ‘Western’ culture and reject direct political discourse. A problem arises when the former are habitually embraced in lieu of the latter, creating a severely inadequate representation of the scope of Indigenous artists.

In 1992, artists Coco Fusco and Guillermo Gómez-Peña staged their now infamous work The Couple in the Cage. Creating a fictionalised culture and location, performing fictional rituals with fictional relics, Fusco and Gómez-Peña used the West’s unfamiliarity of Indigenous peoples and their cultures to reaffirm exaggerated projections of Indigeneity and the ‘native’. In 2018, sixteen years after this project originally took place, these very same tactics are being used to reveal the same reality – that Pākehā know nothing of the Indigenous experience.

Simply because quiet artists are an unfamiliar model within the Western arts industry, their practices are not considered to increase awareness of Indigenous identities. This could not be further from the truth. Indigenous people already speak to social and political issues by the mere fact that their bodies exist in a world that is constantly trying to negotiate their terms of existence. Anne Riley states:

The lack of awareness and dialogue around emotional labour is a testament to the amount of private internal work Indigenous artists have to perform to be visible in the white-dominated art world. As Indigenous people, we work overtime to be seen in our everyday lives, both by others and by ourselves. As artists, we are expected to work extra hours to earn our identity.4

Riley affirms that Indigenous people fight to have a voice in their everyday lives and being both an Indigenous person and Indigenous artist means double the labour, because that is another space in which they need more visibility. Yet another space which requires them to make loud proclamations of their identity if they want to be heard.

Artist and curator Talia Smith (b.1985) was brought up in Aotearoa5 and is now based in Australia. She has a diverse yet typically dislocated multicultural upbringing. When asked by Vice magazine about which aspects of colonisation she addressed through her work, she replied:

When you make an artwork you are inevitably putting a part of yourself in it or exploring a part of your identity. You draw upon your experiences and influences and as a person of Samoan, Cook Island and New Zealand European heritage, that will always be at play in my work even if it does so quietly and not so obviously … The fact that I have a privileged position of being able to make art and work in the arts as a person of mixed heritage is probably the biggest way I do it.6

Smith’s Tow Away (2013) depicts a lone shrub growing in the centre of a brick wall, situated in an empty parking lot. When I look at this work and works like The Ruin 1 (2015) — which incidentally depicts a lone mound of dirt surrounded by trees — I see a conversation about the tension between nature and the man-made, symbolism which refers to hidden trade labour and class. There is little to no declarative sense of Smith’s cultural heritage through the majority of her works, nor does there need to be. She is of Indigenous heritage. She is an artist. She operates from a political realm because she possesses an Indigenous body. More often than not, I have seen the abstracts for Smith’s works and recurring themes include memory, nostalgia and place. The images are tied to her personal history, but this is not always made explicit. I see the influence of film director Wim Wenders in her works. She has a penchant for visual storytelling using romantic landscapes and a very Americana-hued colour palette. The fact that Vice asks Smith (and three other brown artists – Tia Ranginui, Te Iwihoko Te Rangihirawea and Angela Tiatia) about colonisation on Waitangi Day^7, no doubt because of her cultural heritage, confirms my point that regardless of an Indigenous artist’s position on politics, they are always associated with it. 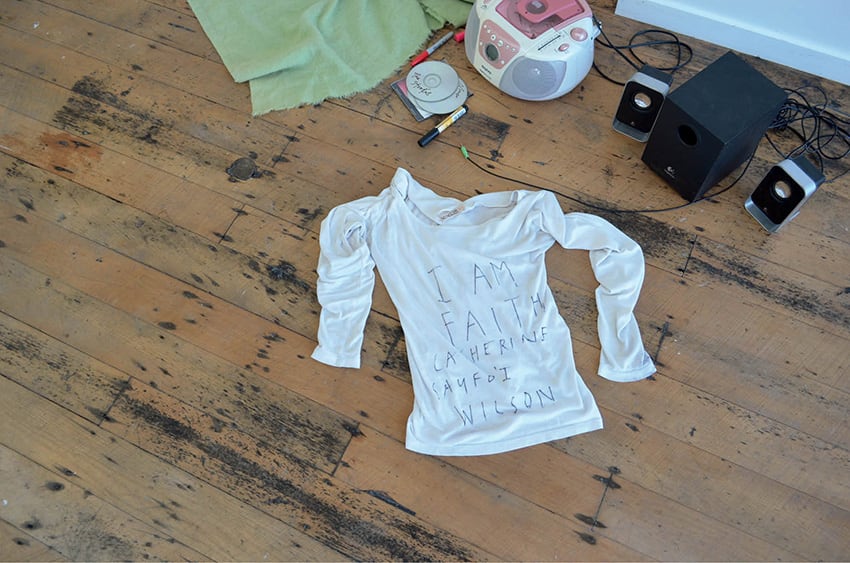 The work of artist and writer Faith Wilson uses nostalgia and text to discuss the tense relationship displaced Indigenous people have with their identities growing up. But for Faith, she speaks of her particular experience growing up as an Afakasi8 young woman. The experience she describes is complex and uncomfortable. For Confessions of an Afakasi, she scrawls diary entries across a four-metre wall in a black marker. In the smaller exhibition space at Blue Oyster Art Project Space, there is a film projection of Wilson in her underwear, exposed both metaphorically and literally. In these works, she discusses losing her virginity and developing an eating disorder. She then says she feels embarrassed about her mum’s brown body while she idealised the body of the ‘slim white woman’9. Wilson describes her process, actively opting out of the type of political engagement typically expected of Indigenous artists:

It’s not my responsibility to be generous as a writer, a female writer of colour for that matter. I don’t have to explain anything to you; don’t have to write political shit all the goddamned time like you want me to; don’t have to ground my writing in the sensual feminine sensitivities that you crave from me: as one of few voices of colour, difference and minority in this magazine—that is my implicit role. In any white institution that I’m involved in these and more are the things expected of me. Which is why last week I wrote some bullshit about being hungover. Because sometimes I HATE that burden of responsibility.10

In Wilson’s work for Artspace (New Zealand) exhibition New Perspectives in 2016, the artist pines over well-known local artist Simon Denny, who was chosen to curate the exhibition. Wilson is the antithesis of Denny; a self-proclaimed afakasi Sāmoan-European woman, known locally but not famous, not powerful in the same way that Denny is. For this work, she created a persona that went back and forth between being antagonistic and adoring towards Denny. This body of works represented the artist’s complex relationship with all that Denny represented – white, male, privilege, patriarchy, power, the body of the coloniser. This work may seem quite light-hearted at first glance, but it is deeply political and apolitical all at once. It may present as a criticism of the power dynamics that are present between those two particular bodies, but there are many criticisms at work here which merely include race relations. Wilson’s true triumph is in her ability to speak from a personal and intimate place, never claiming to speak on behalf of another Indigenous person.

As much as there is a growing interest in Indigenous methodologies, there is also an increase in perspectives like those shared by artists Talia Smith and Faith Wilson. Indigenous people who feel displaced by the modern world and are unsure of their identities are revealing themselves through art. For these artists, the uncertainty around their identities is as much a part of their practice as any aesthetic output. Although, in this generation of artists, the uncertainty is not always a cause for anxiety. It simply exists. Raising discourse around this lack of identity becomes a tool for both working through feelings of not belonging and finding one another.

When perpetual emotional labour is asked of Indigenous artists, it can seem like compounded labour; the work for Indigenous people and artists seems to be thankless and never-ending but most of all presumed as part of an Indigenous artist’s natural state. We need to destabilise the prioritisation of ‘politically active’ artists over those quiet Indigenous artists and stop persistently challenging their cultural authenticity.

What Indigenous practitioners need is active listening, particularly from Pākehā, who must realise that Indigenous have more than one imperative in the arts. They aren’t re-usable (or even disposable) embodied decolonisation tools but real people with individual experiences and aims, which may or may not include being outwardly political. When you are Indigenous, there is no distinction between political and apolitical. No Indigenous artist need be explicitly political either, it is already an inherent by-product of their Indigeneity.

Natasha Matila-Smith (Ngāti Kahungunu, Ngāti Hine) is an artist and writer based in Tāmaki Makaurau. In ‘The quiet need no defence’, she challenges the expectation of Indigenous artists to make declarative expressions of identity and politics.

2. I used the term Indigeneity, in this instance, to include First Nations, Indigenous, people of colour and those who were displaced and most affected by European colonisation of Indigenous land.

3. Pākehā is the Māori language word for English, foreign, European, New Zealander of European descent. Tauiwi is another Māori language term that means foreign, but tends to be applied to non-white/Anglo-Saxon settlers within New Zealand.