un Projects is based on the unceded sovereign land and waters of the Wurundjeri and Boon Wurrung people of the Kulin Nation; we pay our respects to their Elders, past, present and emerging.
un Projects
⤆
un 12.1

I have long been concerned with memories of colonial violence in the Australian landscape; places that have witnessed harm and continue to hold these traumatic memories in the present. Their existence was something I was attuned to as a child constantly travelling regional New South Wales with my family, visiting places and people, connecting with kin, and hearing stories of our past. I have emerged from both sides of this history, with a strong grounding in my Worimi1 and Koorie cultural framework and in other Ancestors who arrived from far off lands in the early days of the colony.

As an adult, these stories have become somewhat of an obsession and a focus of much of my art practice and research. This manifests in different ways and through connections to varying spaces and stories across the country, but at the centre of these investigations is a continuing desire to uncover the trauma of these spaces that is connected to the trauma we, as Indigenous people, continue to feel in the present.

This trauma is not just related to the actual experience of invasion and ongoing colonisation – from the wars, massacres, dispossession, destruction of families and clans – it is experienced through the denial of this. This denial, that has been termed doubled violence2, undermines any opportunities for recognition, healing and transformation from the violent past.

Country can also experience and hold trauma. When I talk of ‘Country’, I am speaking of a concept that transcends Western perceptions of landscape and place, instead framed by an Indigenous epistemology that is a holistic understanding of earth, people, knowledge, spirituality and law. This concept of Country presents land as a force that feels, remembers, and communicates – not a latent, inactive entity.3

I have engaged with creative projects that work directly with Country that hold memories of violence, visited sites, particularly across the southeast of Australia, where traces of these histories remain. While physical evidence is dissipated, lying beneath layers of soil or deep in waters, emotional traces are palpable to those who are attuned to feeling place.

In 2015, I was invited to be a contributing artist to With Secrecy and Despatch. Ten Indigenous artists were invited from across Australia and Canada to participate in this groundbreaking exhibition at the Campbelltown Arts Centre (CAC) under the guidance of curators Tess Allas (Australia) and David Garneau (Canada). The project was generated by CAC who understood the importance of this narrative being given prominence and attention through their relationships with community, particularly Elders such as Aunty Glenda Chalker.

Each of the artists were asked to respond to a violent act that occurred in 1816 in early Sydney, the Appin Massacre. The massacre of Dharawal and Gandangarra children, women and men was undertaken by military officers, under the orders of Governor Lachlan Macquarie. It occurred near what is present-day Campbelltown, 60 kms southwest from the city of Sydney.

I was asked to come in to specifically make a community-engaged artwork; an honour and also a challenge. I viewed this as a possible opportunity to work directly with Country. I spent time with Aunty Glenda and the Community Advisory Group understanding the importance of this story to the Dharawal people. I also undertook a number of site visits with other artists; this was one of the strengths of this project, that we were given multiple opportunities to visit, engage and spend time with community and place.

Our first visit to the site gave me an understanding of how difficult it would be to engage in a site-based artwork. We drove from Campbelltown for about half an hour before we came to a ravine, surrounded by sandstone cliffs, a small creek swirling through the rocks. We crossed a small bridge and parked precariously on the side of the road, there was no safe space to stop. We pulled into the only space available, a driveway leading down to a pump owned by Sydney Water. The sound of this pump permeated the ravine, I had brought my sound recorder but it was impossible to connect to this space with the monotonous hum coming from this machinery.

In fact, this space has been so altered that it would be unrecognisable from the time of the Appin Massacre. Water would have gushed through this ravine, but it is now heavily managed and diverted into the Cataract Dam, Sydney’s water supply. The undergrowth is now so thick and overgrown, no longer cared for and managed as it was before colonisation.

We walked through the ravine, with our cameras and sound equipment, searching for meaning in this place that holds this strong story of violence. But the space felt impenetrable to me. I feel the sadness of knowing what occurred here, but I don’t sense the story beyond this. I leave not knowing what my next step will be. I talk to the project team about the possibility of getting to the top of the cliffs where the massacre might have occurred. I was told it was private land and the owners probably wouldn’t be supportive of their property being identified as a site of violence or willing to let us on. Even if I was able to gain access, I’m not sure that trying to find this location is the right thing to do – these sites sometimes remain hidden for a reason.

In talking to people about where the site is located, there is a similar difficulty. From the stories I am told, I hear that the Appin Massacre was so devastating to the Dharawal that they left this place a er the event, scattering to maintain their very survival. This violence seemed also to fracture memory itself. Each person I talk to has a different understanding of exactly where the violence occurred.

I ended up making a work that developed from listening to the Koori community in Campbelltown, to their strong desire for recognition and remembrance of the Appin Massacre. I couldn’t work with the site, it being – for now – lost to history; but I felt I could make some contribution to manifesting these desires within the art piece I created titled, remember. It created a living memorial:

...Australia is ever ready to commemorate and mourn the loss of some lives, but not others. The poppy is a symbol of loss from wars the nation has been involved in but the wars, conflict and massacres that occurred on this soil should also not be forgotten.

The fringe lilly is a flower that grows across the southeast of Australia and, in my research for this project, I found a story said to be from Dharawal culture. This story is about a young man who refuses to mourn the death of an older man of his clan. The old man came back from the dead in the form of a spirit, emerging from mist that had settled across their country, and struck the young man with a nulla three times to the head as the young man was tearing apart tiny, purple flowers. Ever since, these flowers have grown with fringed petals and with three marks upon them, teaching a moral story of the need to mourn and to remember the past.

In this artwork, the fringe lilly is represented in film, emerging from the mist and brought forth by the voices of young Aboriginal people from the Campbelltown region. The fringe lilly is manifested physically as a purple poppy as it is not just Dharawal people who must remember the past, it is us all.

Please take a poppy with you and place one in the wall to remember.4 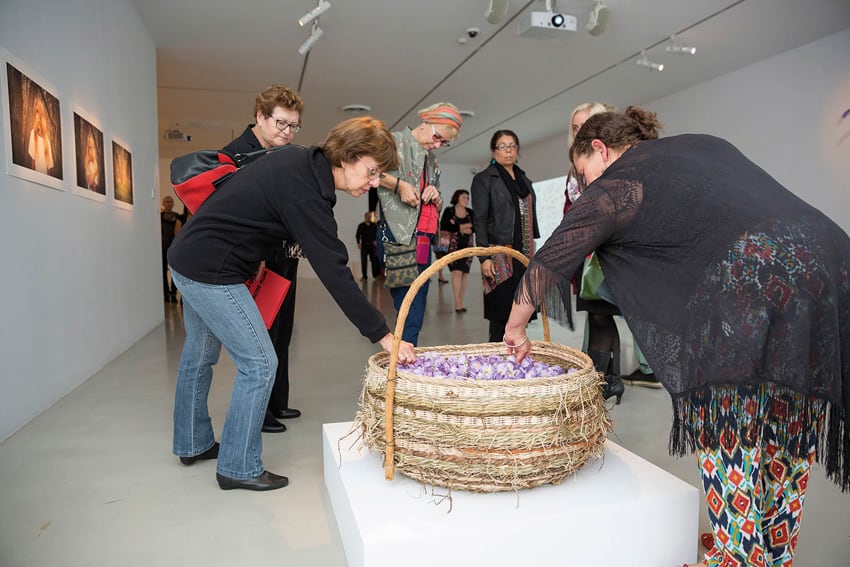 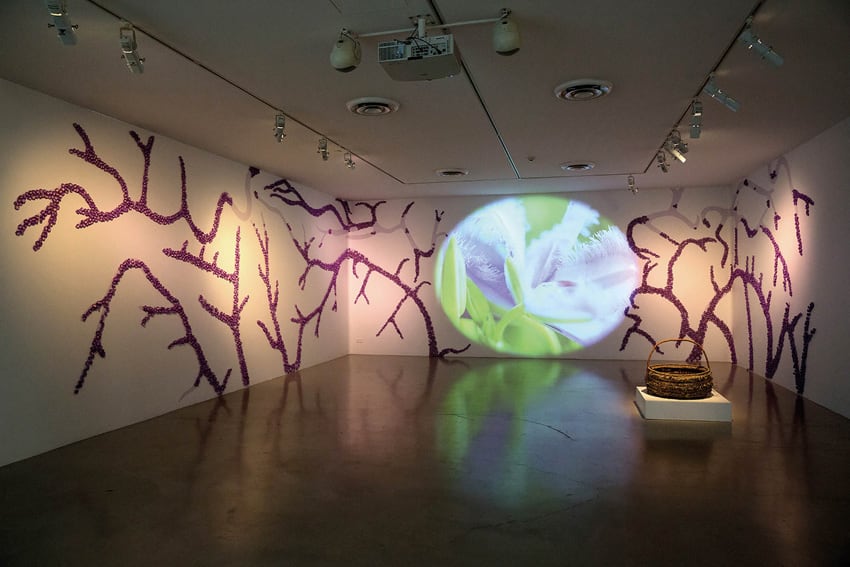 During one of my visits to Campbelltown, I am taken on a road trip with another artist to the Myall Creek Massacre site and ceremony which happens each year in June. We travelled from Campbelltown to the location of the massacre near Armidale, northeast New South Wales. The gathering is huge; some hundreds of people, black and white, come together to mourn this event. There are Aboriginal cultural rites, Christian rites, ceremonies and speeches. At one point, the descendants of the perpetrators stand up – I particularly remember an old man standing with his very young grandson and acknowledging the wrongs committed by their Ancestor and apologising for this. People who would often be on either side of a race divide, embraced one another. This all takes place at the site of the 1838 massacre. It is now a site of healing; grief lingers but this wounded space is lightened by the acts of recognition and remembrance that are brought to bear each year.

Genevieve Grieves is an Indigenous educator, curator, filmmaker, artist, oral historian, researcher and writer. She belongs to the Worimi nation – traditionally from mid-north coast New South Wales – but has lived and worked on Kulin Country for many years. Genevieve has a role as a public intellectual and speaker and teaches at the University of Melbourne, where she is also undertaking her PhD.