un Projects is based on the unceded sovereign land and waters of the Wurundjeri and Boon Wurrung people of the Kulin Nation; we pay our respects to their Elders, past, present and emerging.
un Projects
⍅
un 12.1 Although I know Aboriginal sovereignty as always present, embedded within country, I find my strongest encounters with specific sovereignties of place often occur in unexpected moments – like a bolt of remembering – chanced upon in the presence of a scar tree or a reference found deep within a historical text. Recently I experienced such an encounter when looking for a particular type of tree in the bush-land of Garrmalang [Darwin]. Needing to seek out local instruction as to where to find this tree, I was surprised to realise that my everyday existence is actually surrounded by them. Here, Larrakia sovereignty was made explicit with the shock of my not knowing: a confrontation with my own inability to see this land. Open Cut at the Northern Centre for Contemporary Art (NCCA) in Darwin, last August, was another such encounter. Stepping in from the crowded Parap Market that Saturday afternoon, I entered a small but potent exhibition presented by members of Garawa, Gundanji, Marra and Yanyuwa clans from Borroloola. An exhibition by Jacky Green, Therese Ritchie and Seán Kerins, Open Cut explicitly protested the destruction of Gulf country by the McArthur River Mine (MRM) (Australia’s largest zinc mine, owned and operated by Glencore). Open Cut also sought to expose the ongoing realities of settler colonialism, as enacted by the Northern Territory (NT) Government under the guise of ‘Northern Australian Development’. As the program describes it, the exhibition was an opportunity to ‘speak truth to power’. It was an artistic expression of political resistance that, in contrast to the usually relaxed, even laconic, tone of the Darwin arts scene, felt immediate and urgent. More than this though, Open Cut presented an encounter with place that implicated viewers in the continued destruction of Gulf Country and, in doing so, made demands for a truly decolonial future that is far from being realised. The NCCA in Darwin is a small gallery and Open Cut only encompassed one room. Yet, this close proximity created a heightened sense of potency. One wall of the gallery was lined with striking black and white portraits of Garawa, Gundanji, Marra and Yanyuwa people painted with messages or words. Some read ‘Sulphur, Dioxide’ or ‘Lead’; another ‘Sovereignty’. One man’s chest wrote ‘I worry about what they done to my mothers country’. A young girl looks out to the viewer – her word, painted down the side of her arm: ‘Ethics’. These portraits were the work of Darwin based Settler photographer Therese Ritchie. Invited to create the photos by Borroloola families, Ritchie had asked each sitter to choose a word or statement in reference to the mine. In some ways the images were simple in their re-inscription of marked Aboriginal bodies, perhaps even reductive, yet when I visited Open Cut a number of the individuals from the photographs were also present in the gallery – supporting the exhibition, wrangling kids, coming and going with market food – and it was this direct encounter with the subjects of the photographs that held, for me, the strongest resonance with their statements. In particular, the presence of Garawa leaders Nancy McDinny and Jacky Green filled the gallery with a commanding energy. In this way, appearing less as politicalised images and more as autonomous subjects, Garawa, Gundanji, Marra and Yanyuwa people held the space – and it was as if by entering the exhibition, by meeting the faces and artworks of Borroloola in the white cube of the gallery space, one came into relation with protocols from a different place – the sovereignties of southern Gulf Country. 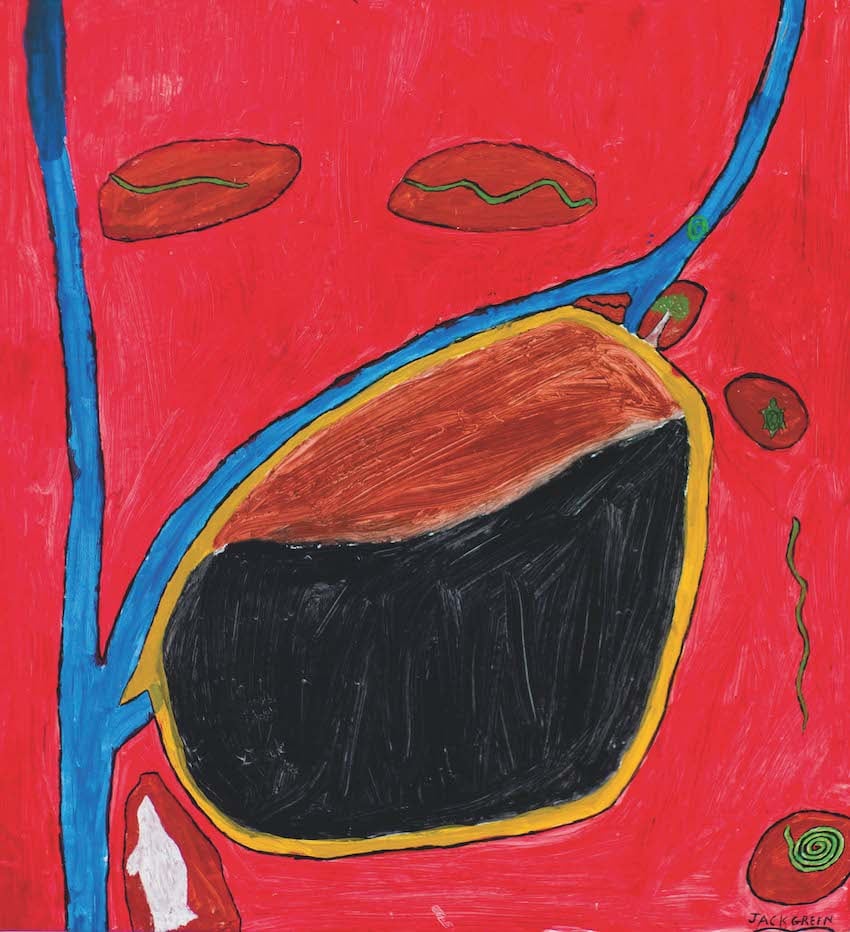 Here I define sovereignty as place-based authority held in the land. Always present – yet borne by descendants through ancestral connection and enacted through cultural practice and ceremony. It’s a definition of sovereignty as ‘permanence’ described by Alexis Wright in her recent article ‘Hey Ancestor!’: ‘I am talking about time immemorial experience – how to grow roots like that. Not like scrap of paper made yesterday – a second ago, flimsy, impermanence’. Revealing these deep roots of sovereignty however, Open Cut also registered the discord between this truth and the current practices of mining – an overlay or temporary order of things nevertheless capable of untold destruction. This is particularly evident in the works of Garawa artist and senior Lawman Jacky Green. In Open Cut Green’s paintings of Gulf country simultaneously presented a strong assertion of continuous Garawa sovereignty and a depiction of damaged and hurting land. Holding the viewer open to the seeming contradiction in these two themes, the works produce an unsettling aspect. Many paintings include figures, infrastructure, trucks, and, most pertinently, the mine itself. Disrupting Settler audience’s desire for an untainted culture usually associated with the painterly aesthetics of Northern Aboriginal art, while presenting a political determination more commonly associated with the South-East, the paintings are contemporary storylines of place that do not shy away from the violence being done to the land: ‘Right in the middle of this sacred country is a torn-up place’.2 In many of Green’s works the McArthur River Mine is itself the subject of the painting. Red Country is one example. Here the mine is present as a central black hole, literally occurring atop of the river, offset by a brown mound and framed by a yellow borderline. In certain interpretations it may be possible to read the dark shape as natural – not unlike a waterhole or rock formation. But there’s something unmistakably ominous about the depth of blackness. In mining language this open cut pit is known, almost poetically, as the ‘void’. The current dimensions of the McArthur River Mine’s void is: length 1750 metres, width 1550 metres, depth 420 metres – with an overall footprint of 210 hectares.3 It was for this massive hole in 2013 that MRM diverted over five kilometres of the McArthur River – so as to dig deeper into the bed of the river. Or as Green more specifically describes, ‘the open-cut pit is right in the place where the Rainbow Serpent rests. They cut open not just the Snake, but us ceremony people too’.4 Thus the river appears as two lines in Red Country, intercepted and re-routed by the void. Yet alongside his works of destruction were Green’s paintings like Jerriminni - The Snake Line, which appeared in the exhibition as an assertion of rights and Law. As a painting that is tied to place – that stands in place and speaks from place, Jerriminni - The Snake Line presents a Garawa reading of country. In this work and the description that Green provides, I recognised just how unsettling Aboriginal storied land is to the miner’s maps and surveys:

Powerful song-lines criss-cross our Countries ... Near McArthur River between two hills rests a ceremony ground where people sing. Three sacred trees stand on the song-line, people hunting on country know about these places and know how to respect and look a er them.^5

This is not environmental activism. Here Green speaks of sovereignty and respect, revealing settler ignorance and arrogance to be hand in hand: ‘miners got no idea of our culture or our rights.’^6 One of the prompting questions for this edition of un Magazine was ‘How do we develop practices that bring us into encounters with place?’ With Green’s work in mind, I would extend this to ask, when brought into these encounters with place, how do we ensure we do not look away from the implications? Green’s work Yee-haw, Money Trucks depicts six figures each riding a large yellow mining truck cutting across country. In the accompanying text he writes, ‘Just like the cowboys scream Yee-haw at the rodeo I imagine the miners riding their trucks across our country screaming, “Yee-haw, I’m rich, Fuck you!”’ It is a clear and uncompromising indictment of the colonising greed explicit in the continued expansion of the McArthur River Mine in Borroloola. Yet, faced with this work I was also left wondering about the rest of us – perhaps not as euphoric as the miners on their trucks yet nevertheless implicated as beneficiaries of the material consequences of the mine. Kate Leah Rendell is a Settler writer and researcher currently living on unceded Larrakia land in Garrmalang-Darwin. Her research focuses on iterations of Settler colonialism at the intersections of literature and cultural studies.