un Projects is based on the unceded sovereign land and waters of the Wurundjeri and Boon Wurrung people of the Kulin Nation; we pay our respects to their Elders, past, present and emerging.
un Projects
❮
un 7.2 Delivery to the following recipient failed permanently: [email protected] Technical details of permanent failure: DNS Error: Domain name not found ----- Original message ----- From: Silvio Berlusconi Date: Wed, Oct 2, 2013 at 11.58 PM Subject: Urgent!!!! :-) To: Giotto di Bondone Ciao! It’s me, Silvio. Drop what you’re doing. Drop the brushes and paints Giotto! I have it on good authority that you’re an accomplished and inventive picture maker? I’ve seen a little of your work and the reputation seems justified, more or less. Giotto, read this message carefully—read it carefully because what I write here is of enormous importance to me, much less the Italian people, much less the world, much less the EU, much less you. Giotto, I wish to commission a grand ­painting. It is to be a beautiful and commanding fresco depicting an illustrious and adorned life—my life. Giotto, I want you to paint it. I want you to bring this vision of mine into the world like my mother brought me into the world, with heaving breaths and torrents of sweat and abject pain. There’ll be no epidural for this birth Giotto! It must be all natural, all consuming, all or nothing. Blessed by God and breastfed by the creative spirit. Giotto! It will test your abilities; of this I’m certain. And, just like mama found a kicking and screaming artwork at the end of the umbilical cord, so will you receive the greatest of gifts. 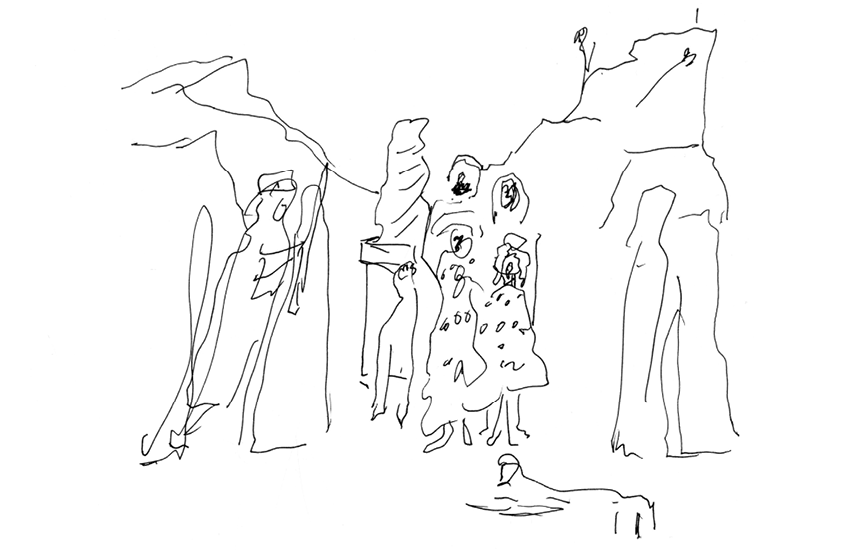 Though, know that I cannot pay you Giotto. I cannot pay you because my assets are frozen—you may have heard that I am the most persecuted man in history? You may have heard that the wretched taxman has his grubby commie hands on my testicles, and he’s squeezing hard Giotto, too hard for me to imagine softer hands… attached to more attractive arms…connected to a better body. The truth is—and this is the truth—lefty clowns can’t tell the difference between a tax evader and a businessman getting business done. They’re jealous dogs Giotto, all they do is bark for my bones. You see, I’m the Jesus Christ of politics and the courtroom is my crucifix. So, no, your gift won’t be monetary—you’re above the €s anyway, aren’t you Giotto! The gift I have for you? Posterity. Can you imagine it? Your name wetting lips forever. Eternal popularity Giotto! Isn’t this what every living artist burns for? Be assured, they’ll dramatise your innovations and reenact your life in the biggest and glossiest of TV shows. I can hear the future now: ‘It was Giotto who had the honour of painting the story of Il Cavaliere’. 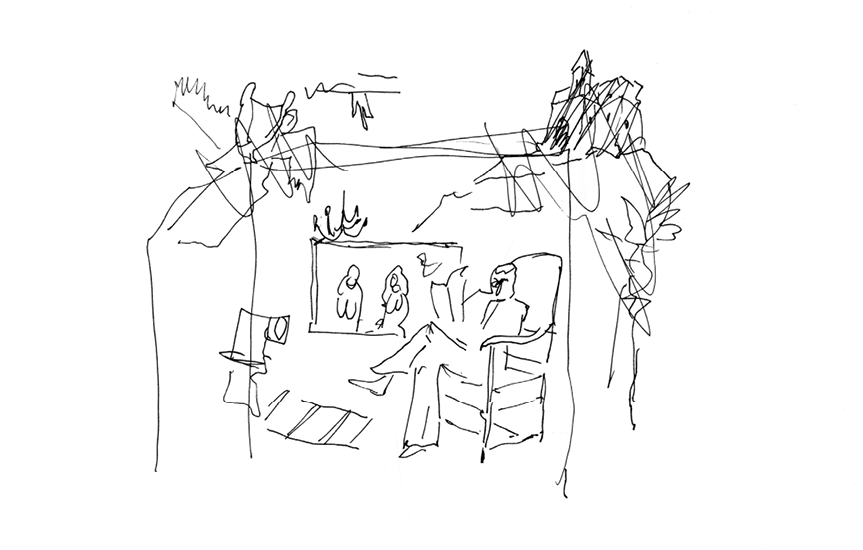 I imagine you’ll need some time to digest this appointment and make plans and cancel other jobs. And cancel and plan you must, because although I have a springtime face (healthy glow etc) I am in fact a lion in winter, and my path to glory hasn’t been easy. I’ve concealed more obstacles than you can possibly paint, and no wall is big enough to hold my many conquests. It is for this very reason that we must invent a new kind of picture together. Giotto, it’s the only way we’ll create a genuine representation of me in my world as I am. I quote myself when I say ‘the artist is the cameraman of the human soul’ (the politician is the TV exec). That is to say, I think we both know that greatness comes from exploiting reality, not by following it. Because, doesn’t the best art wash away the false dirt of truth? Doesn’t an artist do with a picture what a politician does with words, either in person or on that beautiful magic box we call TV? Hear me Giotto. Aren’t we both on our own moody, unaccountable, cryptic date with the laws of life? Can the politician not draw lines and erase them just like the artist? Can we not choose to sign our names with the cream of a cannolo rather than the ink of a pen? Are we not free to taste a good soup if we just so happen to find ourselves with a bigger spoon? Doesn’t a magician give joy to those who wish to be deceived? Isn’t a cake that looks good and tastes awful better than a cake that looks awful and tastes awful? Isn’t it better to carve a sculpture from a rock if it is in the way rather than having to remove that rock completely? Is it not better to look at a €2 trillion hole and imagine some kind of fun secret underground palace? Can we not set sail on our yacht if the enlightened winds of history turn in our favor, and we just so happen to have a yacht? Can’t the pleasures and passions of life flow freely through our respective crafts, you with your brush and solitary existence and me with my loopholes and parties? I know we agree Giotto. I’m glad because we must conquer the clock and get to work. I’ve taken the liberty of sketching a few starting points in the bathtub (brilliant I know!). See attached. Also, below is a list of subjects—or ‘scenes’—that must be included (these should get the juices flowing).

I see a powerful, almost blinding golden light. This ‘light’ is mama’s vagina. Hovering within this light is me, baby Silvio (for a colour ref see the latest Audi advert with the car emerging from a big bright bubble). This moment leads to what you might call my ‘second birth’. You see, it was at an early age that I knew I was destined to lead, to serve, to always be served (please put that I was the longest serving Prime Minister since the second world war somewhere Giotto!). 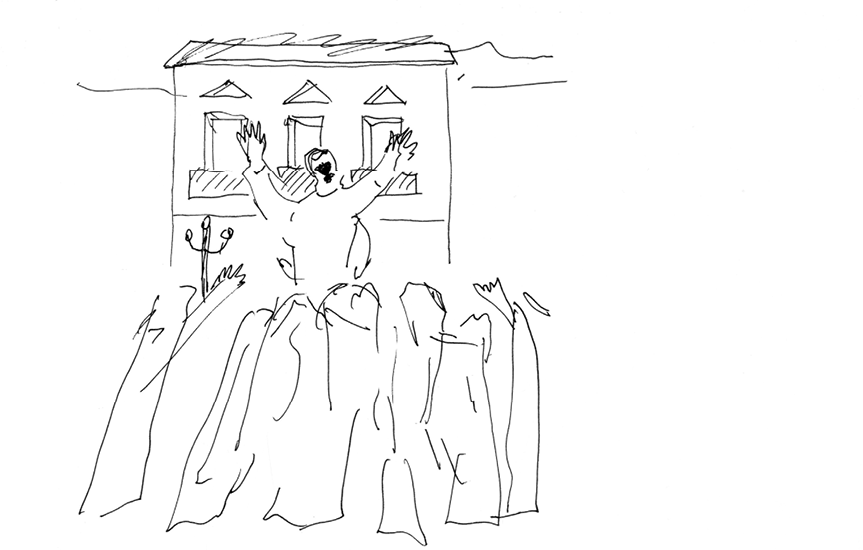 As I recall, my ambition began to flower when papa Luigi Berlusconi would come home from the bank, fatigued and belittled. Around that time little Silvio said to himself: never become a middle-class paper pusher like papa. Why? Because civilisation is a business, of which you’re either a clerk or a CEO; or a billionaire; or a media mogul; or a football team owner; or a Prime Minister; or a cruise ship crooner.

All beauty is difficult Giotto! As Saint Augustine once said in a biopic: ‘love the sinner, hate the sin’, or as I sometimes say, ‘hate the game, not the player’. I envision all my babes as Venus, each on their own seashell, perhaps holding large, red heavy paddles in the shape of a heart. Although, I know symbolism is important to you painters, so my sweet Noemi Letitzia—the schoolgirl—should be holding some books (?), and put her in a tie with that necklace I gave her (but nothing else). It goes without saying to include all my bunga bunga girls—Sabina, Mara, Barbara, Eleonora, Camilla, Angela, Francesca et al. Karima El Mahroug should draped in the Egyptian flag. 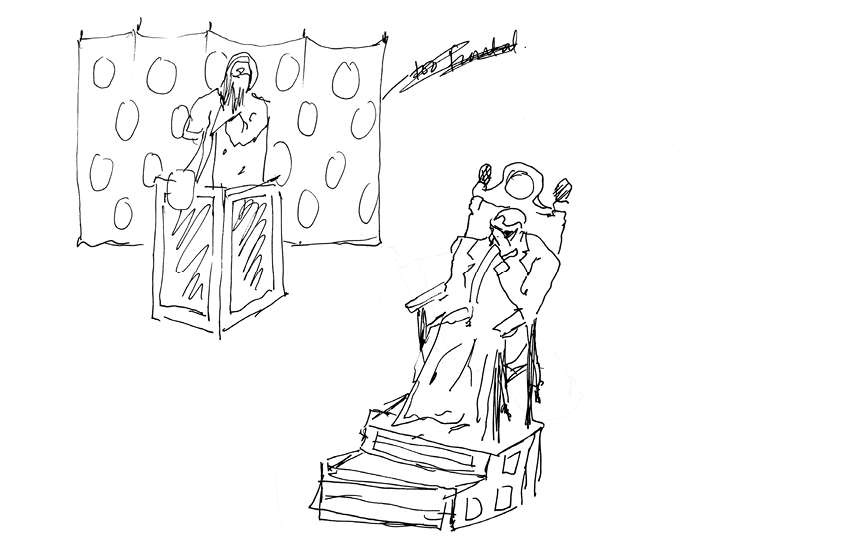 NB: no ex-wives on seashells. Veronica sucks €100,000 a day from me Giotto! On top of which Carla, my first ex-wife, takes her greedy slice of the Silvio pie. So, if you can render it, please show both my ex-wives as two separate black holes into which money is thrown and lost forever.

Like a farmer who sows his seed in the winter and has to wait for summer to see the success of his crop, some of my bambinas and bambinos have ripened into beautiful fruit whilst others have been quick to rot. Like in the old paintings, I wish to correlate my love with size, so depict those closest to my heart significantly larger (no larger than me) than those who I love less (I must admit that some have simply relied on the spirit of my sperm to carry them along). Luigi should be grape-sized. Pier Silvio should be no more than a smudge. My eldest and brightest of the five, the magnificent Marina, should be the glowing apple of the bunch, dressed in a power suit made of fine silk—a symbol of her business clout and political prospects. Perhaps I could be passing her a wand or baton of some kind? Can you paint a jeweled sceptre, Giotto? Use your judgment. Also, be careful with Barbara for she is only pretty from certain angles. Show her perhaps in that red dress she wore for the cover of Vanity Fair, it hugs her figure nicely. I would like little Eleonora, who has recently become a mother, to be painted in a glass of champagne, perhaps playing splishy splashy with her new family, and have me toasting to the carefree life I have provided. 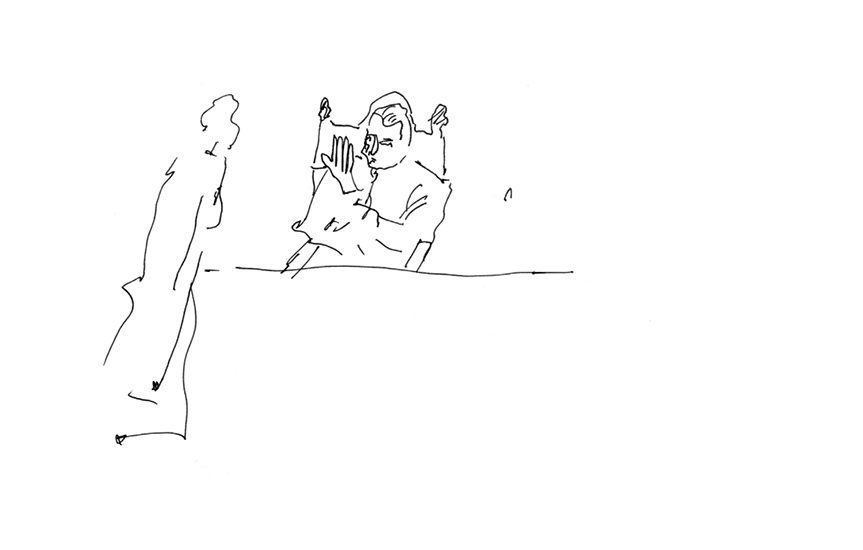 Think of the inside of a sick stomach and paint without pity. It was just today that MPs in my own party have revealed themselves to be disloyal, rabid, scummy monkeys, but as the proverb goes: extreme disease, extreme treatment. Giotto, come up with character portraits for the turds and rats and mould and mud of my life. Sheepish MPs, stinking leftists, perverted communists, ugly women, the poor. I want that woolly clown Beppe Grillo in purgatory—no jokes only torment. I want Enrico Letta to be a corpse refusing to attend his own funeral. I want each member of the Democratic Party to be shown as a pimple on the face of a furious and impatient teen. I want Romano Prodi painted as a desk—wood, no embellishments. I want Roberto Benigni to be at the top of the leaning tower of Pisa, neither standing nor sitting but in a state of discomfort. I want Umberto Eco to be a beanbag. All of them: Squelch! Squelch! Squelch! Giotto, this section will take the greatest of care and the most delicate of touches, and I will send you more names in the coming days, weeks, months. It’s vital that we do this now Giotto, so get back to me asap. In the meantime I will have my assistants scout for a suitable location—somewhere prominent and public in Milan or Rome or both. Wherever it is the universe must see it, and the universe must say: ‘Everlasting Berlusconi! Stay where you are! Live forever! Keep your money! And keep your villas! Because, what would we do without you!?’ We should Skype at some point. Much love, SB ;-) Tom Melick would like to thank Berlusconi for his continued and oblivious encouragement. Mary MacDougall is an artist from Sydney currently working and freezing in Cambridge, Massachusetts.
➔
Processing Disagreement: Part One, OtherFilm and Institute of Modern Art, 5 September 2013
Ellie Buttrose
❰
Bathing in cool water: an interview with Grace Cossington Smith*
Aodhan Madden
Filed under Article Tom Melick Mary McDougall
Advertisement
Advertise with un