un Projects is based on the unceded sovereign land and waters of the Wurundjeri and Boon Wurrung people of the Kulin Nation; we pay our respects to their Elders, past, present and emerging.
un Projects
🠐
un 7.2

‘Didn’t the images and forms of modernism already have ruin, decay, and obsolescence written into them?’1
— Mark Lewis, Is Modernity our Antiquity?

Daria Martin’s One of the Things that Makes Me Doubt is an ambiguous exhibition experience. The chattering of film projectors and the earthy soundtracks by Zeena Parkins resonate through the muddy acoustics of ACCA’s cavernous hall. The ambiguity extends to the works in the exhibition, to their media and the time of their making. It is only after attuning one’s senses to the gallery space that the clarity becomes apparent; the consonance between the subtle colours of the 16mm films and the palette of the oil paintings, and the contrast between the language of the typewritten dream diaries and the language of the films’ montage. The language of the diaries, in particular—having been written by Susi Martin, the grandmother of the artist, for her psychoanalyst—is one of order and objectivity. They read as clearly as a scientific abstract or a screenplay. The films on the other hand speak of an intuitive, emotional exploration of their subject matter. Daria Martin has chosen 16mm film as the medium in which to realise her works, a format which has historically been used for a range of purposes; from cinéma-vérité to early amateur home movies, including the educational and the experimental. For what reason, other than these historical precedents, would an artist today choose to work in this medium? A medium threatened by obsolescence, difficult and expensive to work in, and so limited in its accessibility, in terms of screening and dissemination—which despite, or due to, these limitations maintains a privileged, and perhaps elitist position among moving image formats.

Film, unlike other moving image formats, can truly be described as a ‘medium’—a medium in the sense of the intermediary between the worlds of the living and the dead as during a séance. Film acts as the medium that bridges subjectivities in une séance du cinéma. The physical film itself is not the focus of our attention, it is simply the intermediary through which light is projected. In Martin’s film Wintergarden (2005) the young girl, played by Nina Fog, acts as our intermediary, through which we enter the filmic narrative. She appears to be the object of a ritual performance. A coven surrounds her, binding her with ropes in the centre of a spiral stairway, in an act which is both gestural and erotically charged. In this context Martin’s use of 16mm film resembles the theatrical use of magic lanterns and phantasmagoria of the nineteenth-century more than the moving image formats that we associate with the high fidelity representation of the twentieth century.2 That is to say, the parallels between Martin’s work and spiritualism are apparent in her use of film material. There is a similarity between the way spiritualists used the emerging medium of still photography to reveal ethereal manifestations—which were actually the result of double or multiple exposures of which they claimed to be unaware3—and the space Martin allows for her medium to reveal itself through the imperfect and the unintentional. Conceptually, the pseudo-scientific practices of the spiritualists have less in common with Martin’s own exploration of the unconscious, of the dream-state, in which Martin seems instead to be informed by the literary and the psychoanalytic. 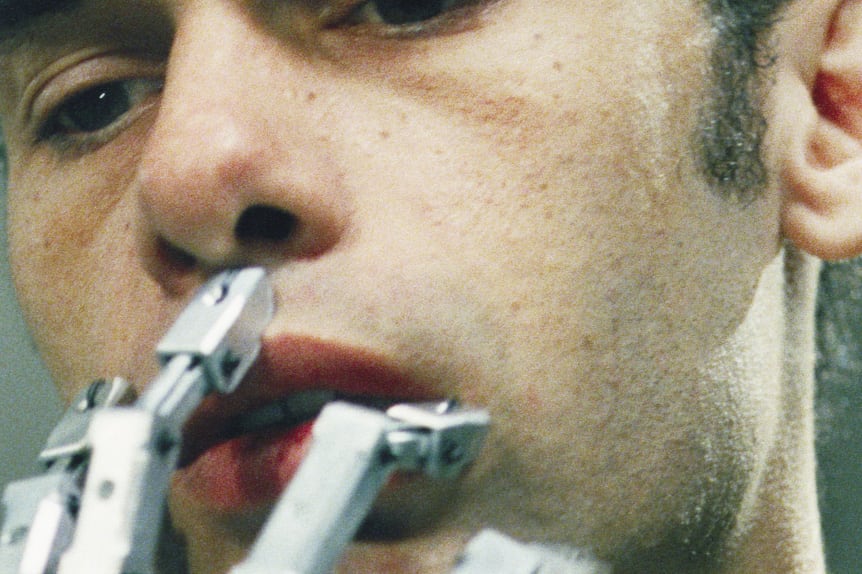 Installed in a black box gallery space as looped film projections, the focus of One of the Things that Makes Me Doubt is on the intersubjective space between Martin’s work and that of her grandmother. Hito Steyerl describes the black box—fittingly for Martin’s subject matter—as a ‘Wunschmaschine…which is permeated with libidinous energies and unconscious urges’.4 The decision to screen looped films simultaneously encourages the audience to glimpse sections of each, in no particular narrative order. This creates what Chris Dercon describes as an ‘anxiety in the viewer for which there is no adequate and satisfactory solution’.5 To Boris Groys, conversely, this method of installation ‘…secularises the conditions under which films are screened by giving the viewer the possibility to move freely within the space where the film is being shown, and to leave this space or return to it whenever he wishes’.6 It is a curious decision in terms of Martin’s films, nearly all of which have a clear beginning, development and end. One has to ask whether the works wouldn’t be better suited to a cinema, screened as 16mm films traditionally would be. Whether this change in context would be detrimental to the work, or its reputation and standing within a fine art context, or whether the existence of extra screening prints would have an effect on the market value of the work, as discussed by Alexander Horwath in an interview about the films accompanying Documenta 12, must be taken into consideration.7

It is important to consider Martin’s decision to shoot on film rather than video in terms of the impact this has on the perceived status of the work. The practice of making a limited number of prints of fine art films, with the purpose of increasing demand by collectors, is a curious one, and clearly anachronistic. This artificial limitation seems to contradict the nature of the medium—unlike an edition of drypoints, where the plate will produce noticeably lower quality prints if more than a small number of impressions are made—films are endlessly reproducible. This culture of limited edition film works, promoted by widely known international artists such as Matthew Barney, Tacita Dean and Douglas Gordon, is a throwback which effectively ‘re-auratises’ such films, according to Sven Lütticken.8 This ‘re-auratisation’ is perhaps a foreign concept in an age where digital media not only facilitates limitless reproduction, but completely does away with the notion of an ‘original’. Of course this ‘re-auratisation’ is also inherently political and subject to complex economic and geographical hierarchies that impact a work’s dissemination and preservation. Such works are only available to collectors and institutions who possess the expertise required to archive and project 16 and 35mm films. Melbourne has a number of such institutions but potential audiences outside of major cities or those in less affluent countries are unlikely to have access to these. Interestingly, this echoes Paul Coates’s observations of the film industry prior to the development of home-video and DVD:

There is a terrible irony in the actual elitism of the film industry, which withdraws prints from circulation to enhance their value. At present, there is less democratic access to the great masterpieces of cinema than there is to those of any other art form.9

Where the original is inaccessible, illegitimate copies will circulate in its place. Steyerl describes these as ‘poor images’, that are usually in one of many heavily compressed digital formats shared on peer-to-peer networks. For Steyerl these ‘poor images’ transform ‘quality into accessibility, exhibition value into cult value, films into clips, contemplation into distraction’.10 Rather than devaluing the original, or decontextualising it, the poor image only serves to increase its aura.11 In drawing this distinction between film and video it is clear that motion picture film occupies a position of privilege in the hierarchy of moving image formats. Video (both digital and analogue) on the other hand is convenient, democratic and affordable. Certain digital video editing programs include filters which emulate the grain of analogue film, and even the colour shift that results from imprecise chemical development. This imitation is an indicator of the comparative value of the two media, since we rarely see artists or film-makers emulating video, or using video equipment from the seventies and eighties for its visual qualities. Harmony Korine’s Trash Humpers (2009) is perhaps one of the few examples which come to mind, shot on VHS tape and edited using two VCRs, it proves the aesthetics of analogue video to be just as engaging as those of motion picture film. Yet Steyerl attributes the perceived pre-eminence of 16 and 35mm film to ‘the insistence of analogue film as the sole medium of visual importance [which] resounded throughout discourses on cinema, almost regardless of their ideological inflection’.12

This discussion of aura is pertinent to the work exhibited in One of the Things that Makes Me Doubt. It is in the nature of oil paintings, analogue film and ‘artifacts’—in this case the writing of Susi Martin—to be auratic. Furthermore, the aesthetic of the works and the artworks Martin references are firmly engaged with modernism. It seems that Martin uses anachronisms as part of her artistic vocabulary, quoting the elements of a past era as though she were tapping into our cultural and historical unconsciousness. It would almost be fitting to attribute this quote from Tacita Dean to Martin: ‘Everything that excites me no longer functions in its own time.’13 Whether both artists have chosen to work with 16mm film because of this apparent fascination with the obsolete, or whether the medium itself has influenced them to reflexively seek out such subject matter, is unclear. In One of the Things that Makes Me Doubt, Martin employs a mode of artistic research that is based primarily in subjectivity rather than objectivity. The writings engage an objective approach, and we read them in the context of psychoanalysis and a scientific approach to the unconscious. In contrast, the films delve into our mythology and an instinctual engagement with the world around us. This instinctual engagement is the apparent interaction between human and artificial intelligence in Soft Materials (2004), it is both intimate and sensual. The collaboration with the University of Zürich’s Artificial Intelligence Lab is fascinating because it explores the realm of research which is outside of the empirical and the quantitative, which Martin has further explored in her most recent film Sensorium Tests (2012). The exhibition’s eponymous work, the longest of Martin’s films and stylistically dissimilar from the others in One of the Things that Makes Me Doubt (2010–2011), is perhaps her first to develop this idea more fully. It comprises a mixture of in-character interviews with the female protagonists of her previous films, mixed with readings from Susi Martin’s diaries. The film is informative without any pretense of factuality. It presents itself neither as documentary nor fiction, but as something which is more descriptive than either.

While 16mm film is obsolete in its commercial and educational applications, this impacts more on the way the medium is perceived and positioned culturally and less on individual artworks still filmed on it. For Tacita Dean, the physical act of editing film is an important part of her developmental process.^14 Raw footage is transformed through the manual cutting and splicing of film. Martin relies less on direct manipulation of the physical medium, than on its semantics, on the social and cultural function that the medium has played, and on its identity and values. It will be interesting to see how this function and perception will change, just as the physical and technical aspects of the medium are changing. Fewer varieties of 16mm film stock are being produced, fewer labs are able to process and print it and the expertise required to produce and project films is becoming increasingly arcane. The digital afterlife of the medium—its resurrection as a software filter—will further erode and debase its meaning; it may lose the connotations it has of indexicality. Its tonality, and colour gamut may become less a signifier of its documentary and expressive value than of poorly imitative effects. Perhaps it will be reduced to nothing more than a cliché of grainy, flickering images, to the pure superficiality of its appearance, through separation from the physical and technical existence by which it is defined. Perhaps film will continue to haunt us only as an apparition, long after it has been separated from its corporeal self and from the living image.

Jesse Dyer is an artist.