un Projects is based on the unceded sovereign land and waters of the Wurundjeri and Boon Wurrung people of the Kulin Nation; we pay our respects to their Elders, past, present and emerging.
un Projects
⥆
un 7.2 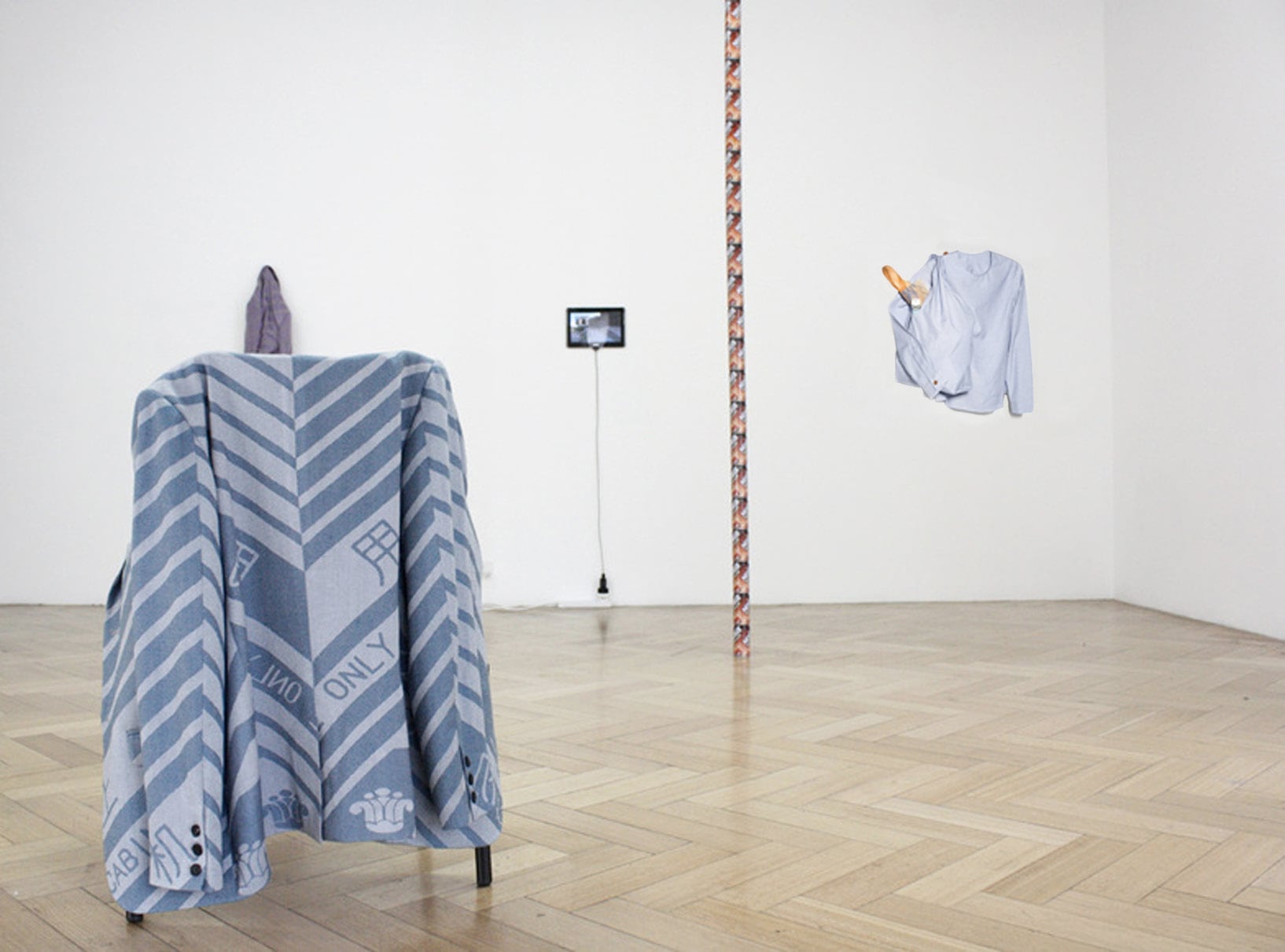 Works by Kain Picken in the exhibition Economy Class/Resort at West Space present a number of material and contextual shifts and initially appear as an ode to travel. These shifts occur quite literally in Resort (China Eastern Airlines)/(Malaysian Airlines)/(Philippine Airlines) (2012/2013), transforming the fabric from three Asian airline blankets into wearable suit jackets. Similarly, these shifts occur, albeit abstractly, when an in-flight magazine is rendered flat by being sealed closed with vinyl text stickers and hung on the wall in Work won’t wait (2013). A correctly cynical embodiment of pseudo culture-producing pop culture exists in Run Northern Italy (2012)—a video work that imitates (or sources) a Tour La Italy-style animated video game. In it, a runner jogs through the bustling Piazza San Marco, only to then traverse the countryside of northern Italy, offering words of meditative encouragement and inspiration along the way: ‘no matter what’s going on in your life, once you start running, everything slows down’. While each of the works in Economy Class/Resort offer up a sort of cultural imperialism, they do so through acts of separation—Picken isn’t misusing culture so much as presenting an attitude toward its cultivation. This is particularly in reference to the pillar of Chinese iced coffee cans in the centre of the room (Harmonize, 2013), perhaps reminiscent of the suburban Australian ritual of taping drained cans of beer together in order to form a snake of VB glory. It seems that each work in this exhibition is in collaboration with something else—a past history in the case of the jackets, an appropriation of magazines or empty drink cans or, in the case of Picken himself, another practice entirely. In a recent interview, Metropolitan Museum of Art curator Nicholas Cullinan and artist/filmmaker (and Prada employee) Francesco Vezzoli discuss the relationship between the fashion industry and contemporary art. They contend that the two aren’t dissimilar, but rather, more aligned than any artist would like to think.1 Cullinan argues that the relentless curatorial search for the next hot young artist could be likened to the necessity for designers to establish a brand and reinvent it each season in order to remain current. Yet Cullinan remains positive, asking: could this be an emancipatory model for the artists who want to outsmart the cynicism of the art world? For some time I wondered whether it was essential to address Picken’s part in the collaborative fashion label ffiXXed and now it seems necessary. Similar to the artistic concerns of Picken, ffiXXed ‘explore new protocols for the structure of a fashion label, using fashion to participate in a wider discussion about new possibilities for the production and consumption of contemporary culture’.2 One can only assume that the jackets in Economy Class/Resort were produced in the same way as pieces by ffiXXed; whether the labour is outsourced or the garments are hand-made is irrelevant. Instead, it becomes a question of context. If the jackets are made in the same studio (or factory) as the recent season by ffiXXed, what separates it from being a piece of conceptual fashion? Cullinan has a point here. Why shouldn’t Picken offer up this dichotomy of functionality and concept as an emancipatory model of artistic production? Picken positions himself in both domains—perhaps he presents us with an alternative—a new hybridity. This position is an interesting one to occupy. In approaching similar concerns through different disciplinary distinctions, the wider conversation to which ffiXXed refers subsequently becomes only wider. Consider the Humanities Research Centre in Canberra, where factional distinctions within the school of the humanities are both crucial and unifying. The HRC proposes an annual theme that is researched by leading theorists in their respective fields, conscientiously making room for a meeting of minds that don’t necessarily think or work the same way, yet think about and work with the same things; an art historian doesn’t necessarily think about Cities, Imaginaries and Publics in the same way a sociologist does, but the common denominator is that they both consider them.3 This kind of duality in practice could be offered up as a sort of pragmatism, or perhaps resolution, where collaboration is necessary regarding the future of a possible wider conversation. When Cullinan talked of outsmarting the cynicism of the art world, perhaps he failed to locate the simultaneous optimism of it as well? While there may be borders separating the creative industries, a universal appreciation remains that links attitudes and processes to one another in pursuit of resolutely progressive (and wider) dialogue. Cynicism exists because we know things can be different, not because we have lost hope all together. Isabelle Sully is an emerging artist and writer from Melbourne.
1. Nicholas Cullinan, ‘Prada: Nicholas Cullinan and Francesco Vezzoli in Conversation’, Kaleidoscope, issue 13, Kaleidoscope Press, Milan, 2011.
2. ffiXXed website, www.ffixxed.com, accessed 25 September 2013.
[^3]: The 2013 HRC theme is ‘Cities, Imaginaries and Publics’.
⤀
Georgia Kaw, Patrick Miller & Elizabeth Pulie, Loose Change Menu, Moana Project Space, 19 July – 23 August 2013
Chelsea Hopper
⇷
Leanne Hermosilla, Limited Visibility, Beam Contemporary, 8 June – 6 July 2013
Julian Aubrey Smith
Filed under Article Isabelle Sully installation Kain Picken review West Space
Advertisement
Advertise with un