un Projects is based on the unceded sovereign land and waters of the Wurundjeri and Boon Wurrung people of the Kulin Nation; we pay our respects to their Elders, past, present and emerging.
un Projects
‹
un 4.1

Curated by Melbourne based neo-gothic artist Tony Garafalakis, this powerful group exhibition included five artists from France, The Netherlands, Mexico and Australia — all of whom explore the symbolism of power and authority in global contemporary culture. Although the artists’ homes range across continents, their sentiments and message are universal and deal with the current global issues of terrorism, power, paranoia, governmental conspiracy theories and the idea of apocalypse.

Garifalakis comments that Ewoud van Rijn’s drawing Only Chaos is Real sets the nihilistic tone for the exhibition.1 Inscribed in monochromatic, tempestuous and illustrative waves is the text ‘Only Chaos is Real’, suggesting that the harmony of nature cannot be disassociated with the chaotic, and that contemporary culture is bursting and bubbling with entropy. It is unclear whether the erupting waves are spewing up the text or engulfing it, but either way the message is clear — where there is life, there is order and disorder alike. 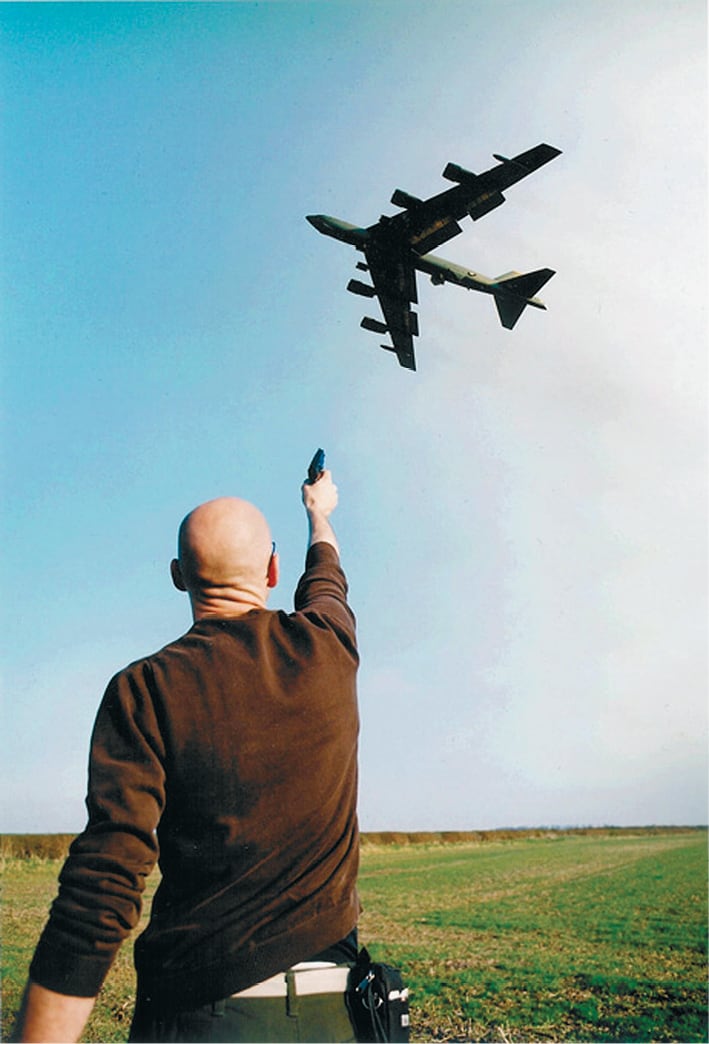 Disorder and anarchy can likewise be seen in Alain Declercq’s simple image of a man aiming a handgun at a B52, bringing forth the omnipresent fear of terrorism in times of expanding globalisation. In terms of setting a tone for the exhibition, this work was pivotal. The image, which was made just after the September 11 attacks in the US, is based on Chris Burden’s 1973 work 747 in which Burden fired a handgun at a 747 aeroplane. Considering the date of its production, this contemporary rendition makes an explicit comment on the political climate of our times, with fear and threat of terrorism constantly hanging over our heads. Declercq’s video Mike follows on in the same thread, featuring what seems to be a secret agent investigating terrorist groups leading up to the 9/11 attacks. Declercq’s work clearly states that paranoia, fear and terrorism penetrate contemporary civilian existence.

Jeanne Susplugas’ colourful drawings question Western medical practices and medicinal reliefs, commenting on social paranoia, vulnerability and fear. These issues are exemplified in the drawing Bracelet, depicting a foot secured in a ball and chain, that is hung in the middle of a medley of pill jars titled Containers (Bret Easton Ellis), which are all labelled with different disorders or illnesses — muscular dystrophy, leukaemia — and a naively positive, quasi self-help advertisement in concertina format 10 Second Health-Tips. Susplugas’ drawings that comment on hypochondriasis and mysophobia, overtly deal with the constant fear of chemical warfare and pandemic viruses in today’s bio-political climate. The drawings are aesthetically akin to the glossy, over medicated lifestyle that they are promoting.

With his own works, Garifalakis furthers this investigation into societal paranoia and how far this can be contorted into conspiracy theories. He hangs two fabric vests, one in leather and one in denim, both encrusted with patches on the subject of the New World Order conspiracy theory. This conspiracy theory refers to the emergence of a one world, secretive, elite and evil government. The artist comments on a particular slice of the theory: ‘that the UN is a front for the NWO and that when the time comes they will deploy their blue beret troops to crush all resistance … the vests therefore are what I imagine these shock troops to be wearing’.^2 This aggressive insurgence is further realised in Jane Fonda, twelve large brass bullets standing in a row with ‘NO PAIN NO GAIN’ engraved into their shells — perhaps the blue berets’ artillery. Garifalakis’ work, always fantastically uncomfortable, brings into the mix an alternate light to this bizarre reality we all live in. 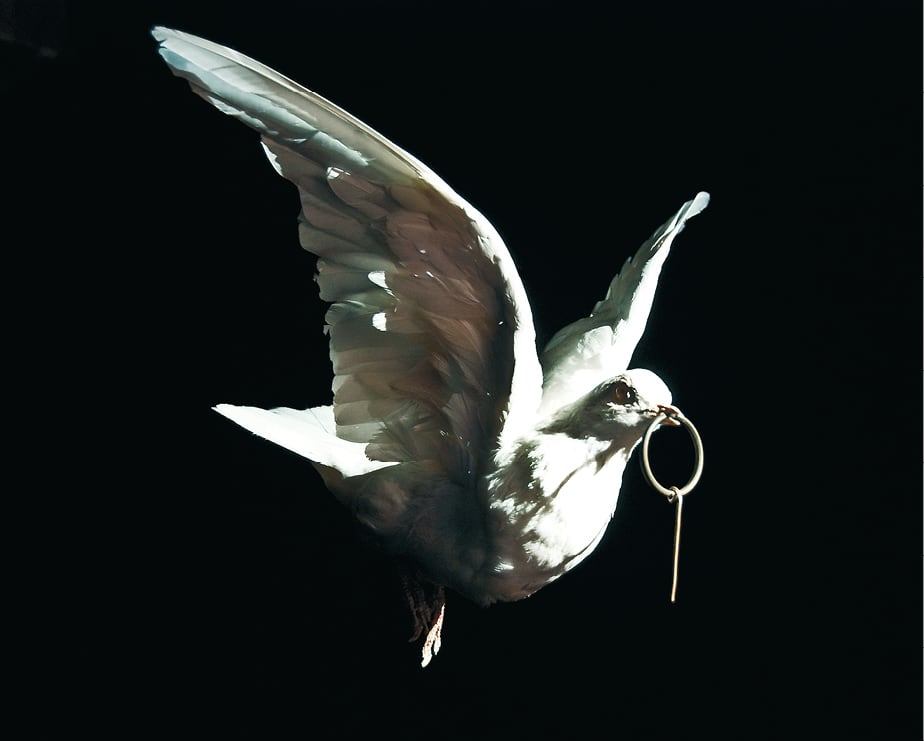 Joaquin Segura’s life-size sculptural installation of a white dove frozen in mid-flight surmised the exhibition’s message with lyrical but obvious simplicity. As the viewer approached the symbol of peace, it became clear that a metal object is hanging from its beak. Below the bird suspended in mid-air, starkly lit and positioned on the ground, was a grenade. In a split second, it became abundantly clear that the metal in the bird’s beak was the pin from the bomb — two explicit and powerful signifiers of opposing sides summing up the sentiments of the exhibition smoothly.

Omega is an exhibition that successfully explores the dark side of political, corporate and social power structures. It brings together artists from diverse parts of the world that are concerned with the paralleled and ever-present issues of fear, paranoia and, ultimately, the end. It is dark but poignant, because these are issues that affect every one of us. Just as Jim Butcher’s main character Harry Dresden says in the science fiction novel Storm Front, ‘Paranoid? Probably. But just because you’re paranoid doesn’t mean there isn’t an invisible demon about to eat your face’.3