un Projects is based on the unceded sovereign land and waters of the Wurundjeri and Boon Wurrung people of the Kulin Nation; we pay our respects to their Elders, past, present and emerging.
un Projects
⟻
un 4.1

The Gallery Can be a Drag 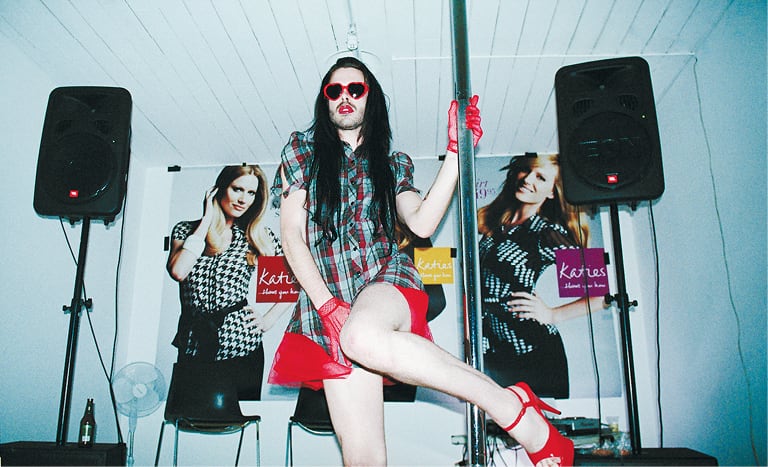 In Marina Abramović’s recent retrospective, The Artist is Present, at the Museum of Modern Art in New York, a naked man and woman stood facing each other in a doorway. As patrons were confronted with the challenge to come in close proximity to a naked stranger, they were simultaneously required to decide which anatomy was the least frightening to face. Two thirds of the visitors chose to not walk through at all. This could be seen as analogous to the stale reiteration of heteronormativity in contemporary western culture, yet it also speaks of something closer to the relationship we have with our own bodies.

Abramović first performed this work, Imponderabilia, with Frank Uwe Laysiepen, aka Ulay, in 1977. It was after the revolutionary political milestones of the 1960s and before the explosion of queer performance art and theory in the 1980s. Still, the police shut down this work half way through the performance — a defiant and heterosexual stand against the physical display of modern alienation and bodily oppression. In 2010, this work enjoys the retrospective benefits of years of art making that uses the body as canvas, nestled securely in the cultural sanction of MoMA. Nevertheless, why were only one third of visitors willing to approach the performance — more than three decades after its controversial debut?

In the institutional setting of a modern art gallery, the display of living human anatomy makes sense. Like a cubist painting or a conceptual sculpture, Abramović’s naked bodies questioned viewer subjectivity via the fractured lenses of time and space, as developed within the genealogy of the human biology and gender. Although we are looking at naked actors in the piece thirty years later, this work is not made to appear ‘sexy’ — yet it alludes to queer readings of sexuality and the body when the performers switch from female-male performers to male-male or female-female combinations. The introduction of a queer aesthetic — in this instance, through the simple presentation of naked and immobile people in a fixed space — can shatter any gender binary foundations the audience may have.

As a comparison, at Llips II: Consumption, a Spill Collective party held at 1000 £ Bend in Melbourne in February 2010, a naked man and woman fell onto the audience while sitting outside their caravan set. This was followed by drag performances, which humorously interrogated different cultural images of man, woman and animal. Inside this ‘art party’, the separation between artwork and audience became blurred — various small stages were immersed within the crowd. The only ‘brave’ act the visitor had to perform was entering the venue but, when inside, different queer bodies of both audience and performers bumped and jostled against each other. In contrast to Abramović’s framing of bodies that one can either choose to contemplate or come into contact with, the queer performances at this event imposed a celebration of expression within the dark haven of a private party atmosphere.

To take a line from a Frank O’Hara poem: ‘the fact that you move so beautifully more or less takes care of Futurism’.1 The immediacy of another person in this way becomes more important than any conceptual understanding of a naked body. At the end of his poem, O’Hara proclaims that Leonardo, Michelangelo, the Impressionists, Mario Marini were all ‘cheated of some marvellous experience’. He tries to provide a different artistic frame for his bodily experience — what José Esteban Muñoz calls a ‘queer utopian potentiality’ or the imagining of alternative futures’.2

This potentiality navigates around the tired rhetorical residue of 1980s queer theory that explains the way in which artists ‘discharge understandings of gender in a post-identity world’.3 Instead of ‘understandings of gender’, Muñoz reaches for the phenomenological experience of our bodies. This model of theorisation always returns to a unity of being, as the phenomenologist Maurice Merleau-Ponty says of existence: ‘it cannot be anything — spatial, sexual, temporal — without being so in its entirety’.4 From the interrogation of sexuality, or gender, in queer performance art, we move away from ‘understandings of gender’ to experiences of subjectivity. In this triadic model of existential questioning, however, the sexual has very different political implications to the spatial and temporal.

If expressions of gender or ‘sexual existence’ belong at local art parties and drag nights, then when are spatial and temporal existential interrogations given the privileged site of the gallery? Traditionally queer performance has developed underground in alliance with drag culture. Australia’s most famous queer performance artist, Leigh Bowery, was also a club promoter but his broader, institutional, acknowledgment as an important contemporary artist only came posthumously.

Some sites are more hospitable to these utopian potentialities. Antonio Negri and Michael Hardt’s decision to publish an excerpt of Commonwealth, the final book of the Empire trilogy, in Artforum last year — because ‘the art community is one context in which this impoverished notion of realism holds less sway’ — indicates the manner in which this potential operates in the dynamic between theory and art practice. The breathing space within the art community is relative to the regulation and manipulation of expression in other spheres.

Australia is a ‘drag culture’5 — one that is forever trying to imitate the -sophistication of international models of institutionalisation and organisation for expression — although unfortunately not for subversive effect. This drag culture includes the galleries and publications of the art community, which in their mimetic acts foster defective ‘realities’. These uniform global sites have specific prototypes for sanctioned relationships identifiable through dress codes, gender and behaviour norms — in such ways that queer expressions are often safer left to the subcultural underground.

Is it time for queer potentialities to be dragged out of the dark? What does queer performance art look like under the bright lights of the gallery? Probably not very good, because in there, the desexed operatives of time and space march to the echo of the museum, taking us ever further away from our own bodies.