un Projects is based on the unceded sovereign land and waters of the Wurundjeri and Boon Wurrung people of the Kulin Nation; we pay our respects to their Elders, past, present and emerging.
un Projects
⤂
un 4.1

‘If the success or failure of this planet, and of human beings, depended on how I am and what I do, how would I be? What would I do?’
— Buckminster Fuller

Sydney painter Tom Polo is an advocate of eavesdropping on public transport and at exhibition openings. His ear is a funnel to an internal resource centre of social discourse. Pooling these stimuli with the naive aesthetics of homemade signs — which he takes great pleasure in reading and laughing at — Polo hones his practice and thematic intention. By dealing in self-portraiture and common feelings and experiences with primary materials, his work dissects the corrosive anxiety we humans have around ‘winning and losing’ in society. As an ironic counterpoint to the success-obsessed art world, Polo has been known to waste time, rig arts prizes (The 2009 B.E.S.T. Contemporary Art Prize for Painting, MOP Projects 2009), grant himself fictional trophies and certificates (No Identifiable Culture, Campbelltown Arts Centre 2009) and exhibit (One Liners [or Suggestions for Conversations in Social Situations], Firstdraft 2009) and re-exhibit work shamelessly (Why do we do the things we do, Perth Institute of Contemporary Art 2009). The significance of Polo’s work lies in its heartening immediacy, his fearlessness in experimenting with the role of artist and ‘learning’ winning and losing publicly — for which he is valiant. When observing Polo’s contemporaries like Jake Walker, Jon Campbell and David Shrigley, who are also painters combining text with a playfully ironic point of view, a shared consciousness rings true.

A constant focus and ongoing project of Polo’s, Continuous One-Liners, explores a congress of mixed feelings via mixed media. As previously exhibited at a variety of spaces, and as currently hung on his studio wall, each work is adroitly installed and positioned to enlist an elastic response from the viewer. As well as this, the titling and often text-based nature of the paintings ensures they are dialogic. The following interview is an extension of this thought. A collection of Polo’s artwork titles is paired with Polo’s comments from a separate discussion. It’s a humble assertion that through his process and his work, he is constantly in conversation and competition with himself.

The 2009 B.E.S.T. (Because Everybody Still Tries) Contemporary Art Prize For Painting (MOP Projects 2009) was a project that I had been thinking about since the end of 2007. The art prize ran like the many art prizes that exist — with entry forms, press releases, advertisements and, of course, an exhibition of finalists works at the end with an announcement and awarding of the big prize. One exception, as stated in the entry form, was that the only eligible entrants were artists born on the 1st February, 1985 and named as ‘Tommaso Polo’ on their birth certificates. My rationale behind this part of the project was that sometimes in order to be successful, or rather, be considered successful, people go to extreme lengths to exclude every other contender. It is also a little bit of a healthy ‘stick it to the man’ on behalf of artists to art prizes and institutions. They dictate who the ‘the winner’ is, which can equate to who is important and what is of value. There is often a push and pull effect with prizes that determine which artists are eligible to be compared to — who is in whose league.

Because competition in art and sport is so big in Australia, there’s always that thing of the gold medal, the first place, and there’s an opposite end to that. So it’s almost like by looking at both the winners and the losers, but focussing on failure, you’re giving light to the loss. I like that idea because we all fail sometimes and it’s nice to highlight that. Was it Samuel Beckett who said: ‘Fail better’?

I had a project called Winners or Grinners (Gallery 9, 2007) where I had anonymous looking portraits hung in the gallery space, and next to each one I used found trophies sourced from op shops. I re-labelled all the trophies with my own name on it — so it could have been a trophy from 1976 when I wasn’t even born, but it said ‘Women’s Ballet Champ, Tom Polo, 1976’. There’s this continuing fake desire to be greedy to win.

One of the ones (One-Liners) people bring up sometimes is I wanna swap CVs with Shaun, which refers to Shaun Gladwell, a very well known, successful contemporary visual artist in Australia. Overhearing that turned into a note that went onto my wall, and into a work, which got giggles and some people said: ‘I wonder if he’s seen this work?’ It’s this travelling of an initial idea, which begins as a note, a note that’d sit in a journal and then become a painting and then sit around my studio and I’d realised they had this element of people in themselves. They could have been people standing at an exhibition saying these things. That’s why I feel it’s portraiture. And there’s a mix of intimacy and things everyone says. I need to take a deep breath before I say this, but I was in an under 10s square dancing champion. This idea of success came early … apparently I do-si-doed quite well.

What I’ve realised is that if you look at the paintings, they are text focussed, but they also have a painting background. So I’m always obviously looking at colours, discordant colours and maybe things that clash. I’m still thinking like a painter but I think I’m bringing a performative or conceptual element into it as well. There’s immediacy in there, but quite an intentional immediacy. Thinking about the actual text that will go onto the piece might take days or weeks, but the act of making the painting might take minutes. I didn’t see that show (Jon Campbell, Folk Songs, Uplands 2010). I saw it online. I would have liked to have seen it. I’ve seen a lot of Jon’s work here in Sydney at Darren Knight. I respect Jon a lot as a painter and the one time I met him we had a really nice discussion just briefly at the MCA. We worked out that the show I’d had at PICA with these one-liners was very similar to a shot he has in his studio from the nineties, so there’s this really strange connection. He’s an artist I respect a lot because of the immediacy of some of them and the way he takes these handmade signs and brings them into the gallery context, which I think is important for the idea of the everyday. 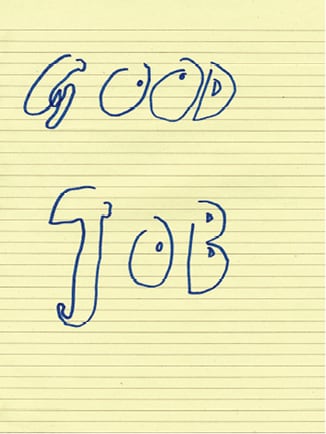 Some of my favourite things are some of the really crappy signs you see people make out the front of their houses. They’re really badly made signs, often with spelling mistakes, and what makes them so funny is the irony that these signs and advertisements are supposed to be enticement and these things are so bad, but so good.

I was riding the bus home recently and the guy in front of me had a large tattoo across his shoulder blades that read ‘Such AS Life’. I still wonder if he realises he’s wearing a permanent mistake?

I hung every single certificate or ribbon or anything I got as a child, in this massive installation, so you walked in and it looked like it was raining awards (Gallery 9, 2007). I wanted the viewer to walk in and realise that this thing happens from an early age. It’s quite funny reading some of the awards. They were for a pen licence or a well tucked in shirt, and I’m not gloating but I probably had hundreds of these little coloured cardboard certificates. When do we receive awards for wearing a good shirt in adulthood?

Sometimes I even secretly think to myself if it goes bad, I’ll just pretend it was supposed to fail. That’s a concept in itself I think. I haven’t really kept a lot secret. I’ve been working my process quite publicly and that’s how I work out what is good and bad. Things don’t just have to happen in the studio behind closed doors where people can’t always see it.

I was often titling the works with these texts that I thought were really vital for the work and then I realised the titles were actually critical enough to withstand the concept I was trying to get through. The text has always been there in my work through either titles or little side notes that I’d have when painting, but then I realised they’re just as important. So for the future, I’m wanting to have these painterly works, but I think they can work alongside the text works.