un Projects is based on the unceded sovereign land and waters of the Wurundjeri and Boon Wurrung people of the Kulin Nation; we pay our respects to their Elders, past, present and emerging.
un Projects
⥶
un 10.1 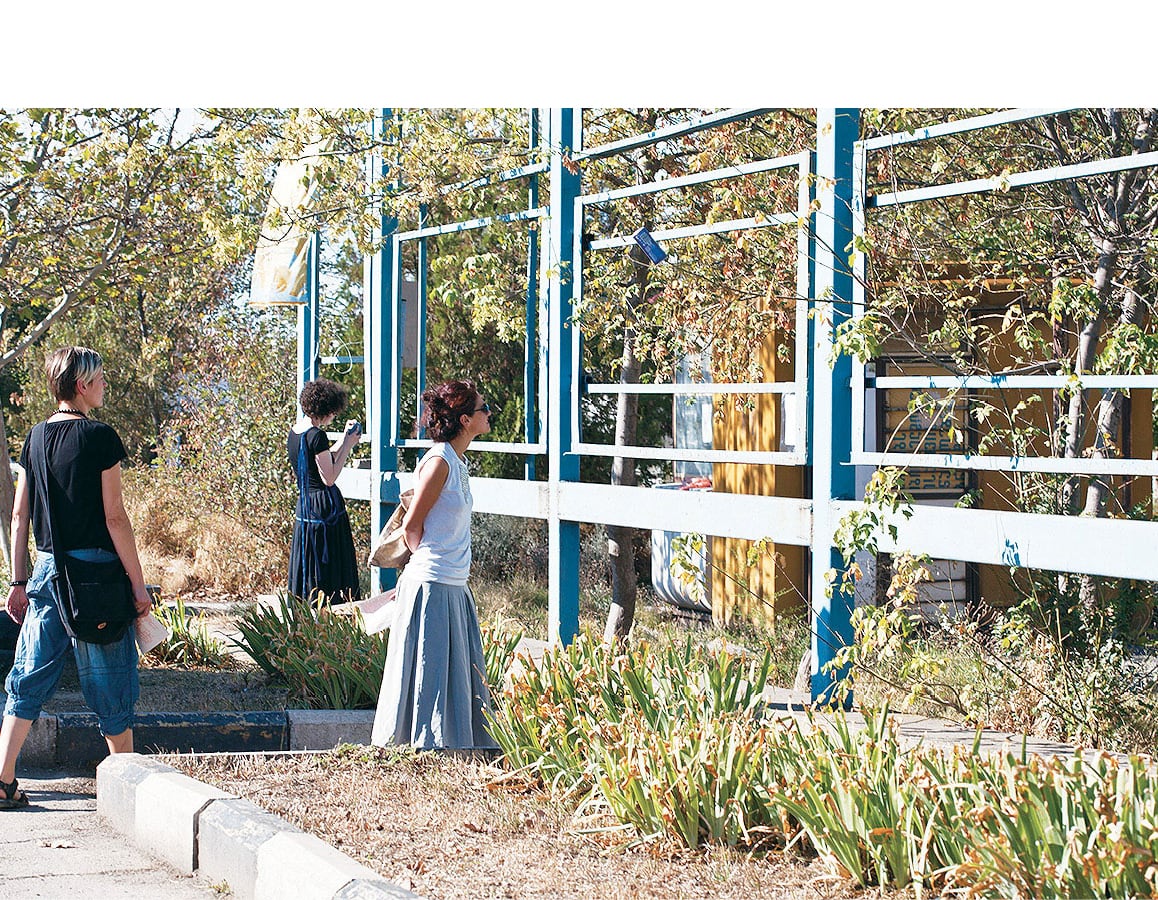 In history as in nature, decay is the laboratory of life. — Karl Marx

124,908 took place in the city of Rustavi, Georgia, as part of the 2nd Tbilisi Triennial: ‘Self-Organised Systems’. The title of the show expanded the threads of Lucy R Lippard’s ‘numbers shows’. Curator Tara McDowell and host, Galaqtion Eristavi (of Georgian art space, Block 21), invited eight international artists to intervene at various sites of post-industrial Rustavi. The main road of ‘Old Rustavi’ leads to the opening gates of the metallurgy factory — this direct vein reiterating the centralisation of labour to the city. On top of the entrance of the steel works sits a clock where a digital bell strikes on the hour. The city supplied the majority of steel to the rest of the USSR. Up to 300,000 people lived in Rustavi at one time. The collapse of the Soviet Union in 1991 was economically devastating, resulting in mass unemployment and exodus. A census in 2013 makes 124,908 a vague estimate of the current population. The staple product of Rustavi is abundant — steel fences line streets and close the dry grass off in bare parks. Dust is continuously lifted into the air from hoons flooring their BMWs. Easy impressions see to a palpable melancholy engulfing the city. A friend told me that it has the highest suicide rate of any city in Georgia. Notions of Rustavi once being a ‘worker’s paradise’ are a bleak irony given the city’s current reality. The prospect of hosting a large-scale exhibition here is seemingly absurd. The first site of the exhibition was Ash Kilmartin’s inter-curating project on the vacant billboards in front of the steel works, which were once used to espouse collectivist slogans. Kilmartin invited seven artists to contribute: Xin Cheng, Eliza Dyball, Clementine Edwards, Debris Facility, Emma Fitts, Susan Jacobs and Virginia Overell. Dyball and Kilmartin initiated proceedings with a performance about the entrance and steps of the factory that included scraps, rods, shavings and offcuts of steel; leaving them on the steps, handing them around and tacking them to the boards. For the visitor to Rustavi, the perplexity of Stalin’s industrialisation program appears as a grim science-fiction that emboldens presumptions of the former Soviet bloc. The performance manifested this bafflement and alluded to the abstruseness of the art tour to follow. The decorated boards resembled a collage of cultural propaganda. Intriguingly, one of the works was stolen on the first night. Next was George Egerton-Warburton’s installation in the abandoned automatic factory for experimental physics. Clusters of twigs and sticks, collected from the streets and bunched into brushes, were suspended from a long piece of steel. The objects were inspired by observations of mostly elderly locals sweeping the streets, seemingly without being employed by the council. A form of solidarity lingers on despite the combustion and refuse of Rustavi’s prior universe. The dangling sculptures were a quiet ode to the innate civic liability that the locals have to the city. Zauri, a former worker and physicist who has voluntarily become the factory’s caretaker by living in its decaying shell for almost twenty-five years, is an immediate exemplar. Zauri read a text by Egerton-Warburton on how work and time distort one another, evoking the void of the latter once the former disintegrates. Cevdet Erek’s sound installation, Room of Rhythms – Theatre, featured in the darkened, unused theatre of the Chemists Culture House. Stepping in, I started to mull over the obvious allure of disused spaces — thinking of abandoned buildings as primordial structures that live inside us. We embrace and defile what is already decimated. We can piss in them, shit in them, drink in them, break off their doors and walls, smash their windows, dance, snort, shoot, fuck. Such structures can become adventure rooms of excavating despair. That is if the space holds no personal significance. With a slow and monotonous pulse bouncing through, Erek’s piece evoked an air of contemplation. The echoes waywardly recalled rave culture, but more directly invoked the multiple lives (and voices) of architecture slipping into oblivion. In the adjacent hall was a paste-up of Helen Grogan’s text interventions (also found by the automatic factory and the unfinished Louvre-styled steel pyramid nearby). Grogan instructed a selection of people to write their observations at various spots in Rustavi. The posters subtly presented themselves as canvassed jottings, but were rather unmemorable — perhaps ephemerality was key. The work of Amy Franceschini and Ieva Misevičiūtė elicited a similar response at the next stop: the Rustavi Historical Museum. Misevičiūtė’s installation consisted of a lump of clay accompanied by an instructional audio recording. Visitors were encouraged to mould the clay as they pleased and hurl their handfuls at a white board. Franceschini’s piece upstairs placed text alongside a pair of different shoes which were traded between the artist and a Georgian; each person walking around in one sole of the other for a time, the two never meting. Both of these works alluded to the absence of their makers, which in turn emphasised the museum and its more intriguing features; photos from the works, factory clothing and paraphernalia, archaeological finds of the region. Leone Contini’s performance in the desolate zoo brought the afternoon to a buoyant close. Listing various recipes containing zoo animals concocted in times of war or collapse, Contini created an absurd eulogy to the former inhabitants of the empty cages. An ironic wake was unfolding, soon to include a lunch of anonymous flesh. Georgian wine and chacha was poured. A cooked (and unidentified) carcass was unveiled. Before feasting, Zauri interjected to share his thoughts on the event, piercing through the accumulated and jumbled expressions of the day. Glass in hand he asks the questions: ‘If we are growing into a more connected world, and into a more globalised world, then we need to ask ourselves: where are we going? And what are we leaving behind?’ A walk after a few drinks led to the most underwhelming inclusion in the show: Kateřina Šedá’s collective painting action, Spirit of Rustavi. It seemed especially redundant after Zauri had brought the day to a conclusion of sorts. People were encouraged to paint a large canvas with straight lines of different colours to summon the ‘Spirit of Rustavi’. Lines were ignored. People decorated somewhat indifferently. A large swastika appeared after a while. Contini’s event continued with the carcass and the wine being shared around. The sun fell down on the hills in the distance where a shepherd and his flock passed an enormous steel cross. A group of young teenagers practised parkour on the concrete slabs of the park. The sights alerted me to the most interesting aspect of 124,908: the way that Rustavi responded to this type of contemporary art festival being thrust upon it — through oratory, bemusement, apathy, theft, a swastika. The verity that 124,908 was open to this was the exhibition’s strength. Zauri thanked those he met and went to sleep another night in the factory. The digital bell on top of the steel works striking every hour.

Scott McCulloch is an Australian writer of mixed descent who currently lives in the Caucasus.