un Projects is based on the unceded sovereign land and waters of the Wurundjeri and Boon Wurrung people of the Kulin Nation; we pay our respects to their Elders, past, present and emerging.
un Projects
⇷
un 10.1

The deep clap of bronze against bronze reverberates over a stretch of space. Areas can be observed to stir, inhabitants rustled by the tongue’s shudder cast through the air. Even if this movement is not perceived aurally, it registers as an attunement of bodies. The narrator makes a low, thick noise — indecipherable. Morning time. A phone begins to vibrate on a small wooden table. It makes the sound of a cricket, rubbing its phantom hindquarters together, blissfully unaware of its embarrassing incapacity. For a second she thinks she is in a field: pale yellow light blinds the eye, sun pouring, limbs outstretched, surrounded by wheat obedient to the wind. Tractor whirr. Eyes adjust and light floods in. Move now. The clock has been ticking for one hundred and seventy-six years, sitting where it always sits, outside the rooms where great atomic truths are decided. As the reels spin, catching the radio waves in their magnetic writing, her low and even voice remembers the bird at Allanbank. Itself a kind of playback device, she recounts its concert heard through the bushland. Those methodical ascending scales imported from the European continent that it advanced, and was to become the antecedent for generations of inhuman timbres defiantly improving upon the formula. As someone reads a book, a manual of some kind, these words enter their head: You can salt the tongue in brine, keep the tongue in it for 7 days. The page flicks and rests upon the body of the book, falling to an inaudible thud upon the mass like a supine muscle in soft repose. They look up from the tome as another person ushers them into a small room containing a large mechanical structure. Placing headphones over the reader’s ears, they are coaxed to lie down on a horizontal surface. Speak. A close-up of feathers and bulbous throat that promises air. Jaws cocked, beak parted, what issues from the bird’s mouth is not what we expected. 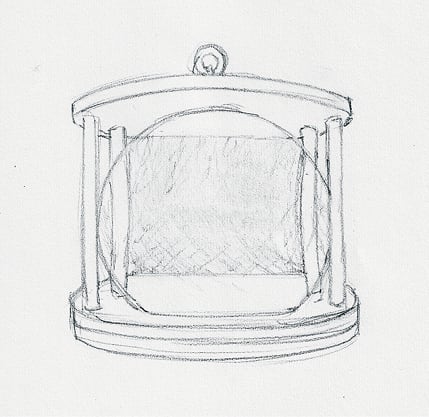 As the body is slowly fed into the tight, circular tunnel — very slowly, ever so slowly — a loud sound like a jackhammer emits from it, rhythmic as a military march, and the body feels an odd sensation dance about its skin, starting at the feet and moving progressively upward. Like needles made of air. Atoms dance, their forms lurching to the attention of an invisible force as they align into a single axis. Regimented, unable to disagree, their poles sit side by side with each one pointing straight upward. Suddenly their will is returned to them and they bounce around in a great rabble, eventually re-forming in a heterogeneous arrangement. Some take longer to become stationary, whilst others settle in quickly. They are afforded a brief rest before they are once again called to action. Someone looks at a screen behind glass, an image of some kind. These words enter their head: Break. Fracture. Through greenery and a bed of fallen eucalyptus leaves, the air is still. On a fallen tree trunk the bird with the fantastic plumage can be seen. A chainsaw sounds, and then the same sound again in flawless repetition, although no tree can be heard to hit the ground. The metal layer is lifted upward by its top and the core is left behind, baked loam resting heavy on the pressed ground, bestowing no sound, a solid mass that absorbs all notes. Lost in a daydream on the train and hearing the faint bleed from two sets of equidistant headphones, she drifts back to the sun-drenched field. She is underslept. The sound of several bronze bells ringing in unison jolt her out of her daze and these words enter her head: You’re late. So improbable that its furry paws could grip the rope. Nonetheless, the creature grasps the cord between its pads and draws down. Royal blue, black lines, brown, and the kind of red that you see in the cave churches. A man in simple clothing is walking along the boundaries of a field. With each step, he solemnly sounds a small metal structure held in his right hand. As the metal tongue hits its container he sees ghostly bodies rising from the fields, vanquished like smoke from a burning liquid. 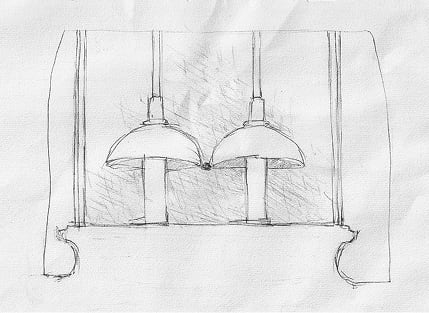 Go like the clappers. In this case a fact is omitted; the chainsaw sound does not originate in nature but in the panda enclosure. The misnamed bird hears the nearby space of segregation go up, and when it re-tells the story it does so with a series of hammer hits, drill charges, and saws cutting through wood. The occasional camera click. Thick with a promise of longueur, the magnetic field becomes focused on the tongue it is fed. Spine-down entering the oracular cavern, the body feels a mild level of claustrophobic panic as the outside world — only scarcely audible before — becomes completely muted by the sharp racket of rhythmic radio waves and the cracking spikes of the blown headphones. A complete sensorial bombardment, the otic passages fill with ringing as the air-needles do their work. Remain silent. Back and forth, back and forth, the clapper strikes the copper piles, providing just enough charge to continue its own movement. It’s been doing this for a while now; no one truly knows why, but it perseveres like the changing of the seasons. More a bell of constants than of beginnings or endings, of plague or pestilence. It lives in voicelessness behind two layers of glass: silent metronome, it may outlive us all. 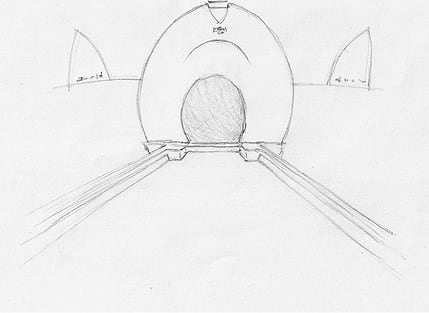 A pair of hands applying a slick of dazzling metal to the outer surface of a small bell, easy enough to grasp and ring with one hand. The warmth of copper embraces the simple iron curve of its new armature, a kind of mummy-wrapping. It is left to cool and later taken with great care to its final resting place. The bell is retired here, placed in its purpose-built shrine and left to endure old age unseen, unheard. The tune amongst the trees hints at the call of birds, the hum of mosquitos, the light notes of a flute. It suggests a dance for tiny insect bodies and they oblige, unknowingly. Rest. The backlit horizon-scape adorning the roof is shot through with brilliant purpley-blues, but the perspective’s all out; from this vantage, the sky splits in two. 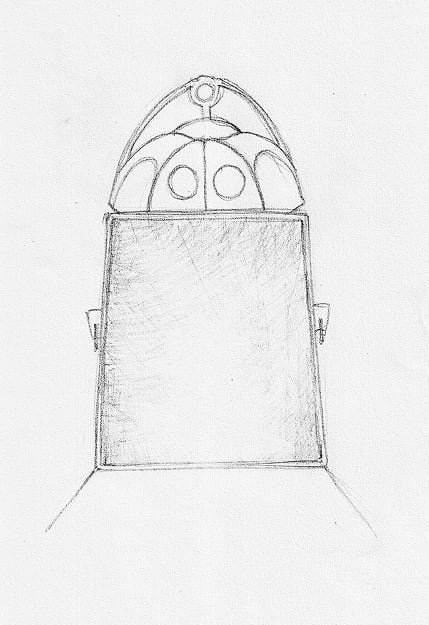 A meniscus snaps into place as the structure is lowered into the water, sealing the two bodies into a suspended breath. Their oxygen circulates a closed loop as they fall deeper. They hear lapping outside the walls in their descent, pushed down by the heavy metal roof. Heart racing, a repetitive beat reaches her ears but it is not apprehended. Stop moving. The ears sway in the wind as the sun falls behind the hill in the distance, and the hum of many legs can be heard, vaguely biblical, vaguely menacing. Something carries on the breeze: a footstep, and then another. The faint tinkle of a bell. The deep clap of bronze against bronze reverberates over a stretch of space.

Listen here to an audio artwork based on Saskia Doherty’s The deep clap of bronze against bronze reverberates over a stretch of space.

The bell’s peel has been a director and narrator of human activity for immense swathes of time. Used variously as a voice of power, it has been utilised as a time-keeper, a marker of death, a call to prayer, a signaler of disease, an insurance policy against evil spirits, a delimiter of boundaries, and a dictator of when (and when not) to speak. The parts of a typical bronze bell include a body, a canal, and a tongue or clapper.

The Oxford Electric Bell, or Clarendon Dry Pile, resides outside the Clarendon Laboratories at Oxford University. It started its stalwart ticking in 1840 and continues to this day. Its exact mineral composition is unknown, however it is composed of two dry pile batteries made of metal between which a pendulum swings, creating the requisite charge for it to continue. It is completely inaudible, displayed behind two layers of thick glass.

On June 29, 2007, Apple Inc. released the first version of the iPhone. At its release the iPhone offered 25 ringtones, including the digital playback of a cricket’s mating call, and that of a bell tower.

The iron Bell of St. Patrick’s Will was considered too holy for sight, and so was coated with a layer of copper in order to shield it from mortal eyes.