un Projects is based on the unceded sovereign land and waters of the Wurundjeri and Boon Wurrung people of the Kulin Nation; we pay our respects to their Elders, past, present and emerging.
un Projects
⇦
un 10.1 Melbourne artist Sean Peoples’ recent work can be characterised by its numerous gestures of forced — even dubious — connection. For the last two years, the artist’s studio at Gertrude Contemporary has been abuzz with the continuous hum of multiple 3D printers producing grey plastic piping that he has designed using cad modelling software to connect different, vaguely cylindrical objects. For his 2015 Studio 12 exhibition, Sorting Demon, Peoples presented two wall-mounted works that detailed an elaborate circulatory system: the 3D-printed pipes sprung out of the wall then began to connect the most unlikely objects to one another. A bottle of shaving cream was plugged into a can of Mother energy drink was plugged into a crusty baguette was plugged into a bottle of tomato sauce was plugged into deodorant spray was plugged into a tin of spam was plugged into a pump bottle containing women’s moisturiser (all substances that go in or on the body). For his contribution to the annual Gertrude Studios exhibition later that year, Peoples used the 3D-printed pipes to join a number of sticks that he had collected from the streets surrounding his home in the Dandenong Ranges, fashioning them into a single, uninterrupted line that emerged from the ceiling, ran the entire width of the main gallery across a horizontal beam, before disappearing into the front-of-house area. Peoples’ idiosyncratic plumbing system connotes the digestive system of the body, as well as the water and waste removal systems of buildings. (That the tubes are related to waste removal is further suggested through the modified plastic waste bins that the artist has also made, in which small sculptures are nestled into the bins’ walls as if enshrined in a grotto.) Emerging from the wall, Peoples’ tubing system reads as if it were all-of-a-sudden exposed: no longer concealed beneath the skin of a body or the wall of a building. It suggests a revelation of how things really work, the unveiling of an alternate reality or other dimension, or perhaps merely a different perspective on the organising principles that structure our consumerist lives — for the connections that the plumbing produces infer an interchangeability of age, financial value and provenance, despite how contradictory such equivalence may, in fact, be. For an upcoming exhibition at TCB Art Inc., Alien Antique, Peoples will again use his pipe system to create three-dimensional wall-based assemblages comprising of wallpaper-covered composition boards, twigs, readymades, and affirmative slogans printed in faux-vintage or ‘handwritten’ fonts. The word ‘MEMORIES’ is printed as though a fading passport stamp, whilst ‘TRADITIONS’ is designed to appear as if engraved on a metal plaque screwed into a wall. Peoples uses the term ‘Alien Antique’ to identify this confused combination of temporal and material signifiers in certain objects and images. He coined the term specifically to describe a particular genre of homewares that, he believes, are endemic to certain Australian suburban ‘old-timey’ gift shops — such as those he is surrounded by in the Dandenongs (the site that underpins all of the works in the exhibition).1 For Peoples, an Alien Antique is something that has been manufactured to look old, even though it is new. It is a contemporary object that has been filtered through a warped historical — or more specifically, a Victorian-era — lens. (No, not lens — but 3D printing machine! Like the alien Biltong replication machine in Philip K. Dick’s 1956 short story, ‘Pay for the Printer’.) Indeed, an Alien Antique is not totally unrelated to the science-fictional subgenre of steam punk, which mixes nineteenth-century industrial design aesthetics with futuristic technologies. An example of an Alien Antique could be a motivational message on an old decoupaged piece of timber, or a rusty metal tree branch with photographs nestled inside it. Like the objects connected by pipes in Peoples’ recent Gertrude works, the temporalities, materials and sentiments of Alien Antiques are forcibly connected. The effect of these connections is one of quaint internal disharmony, not dissimilar to the cut in collage. 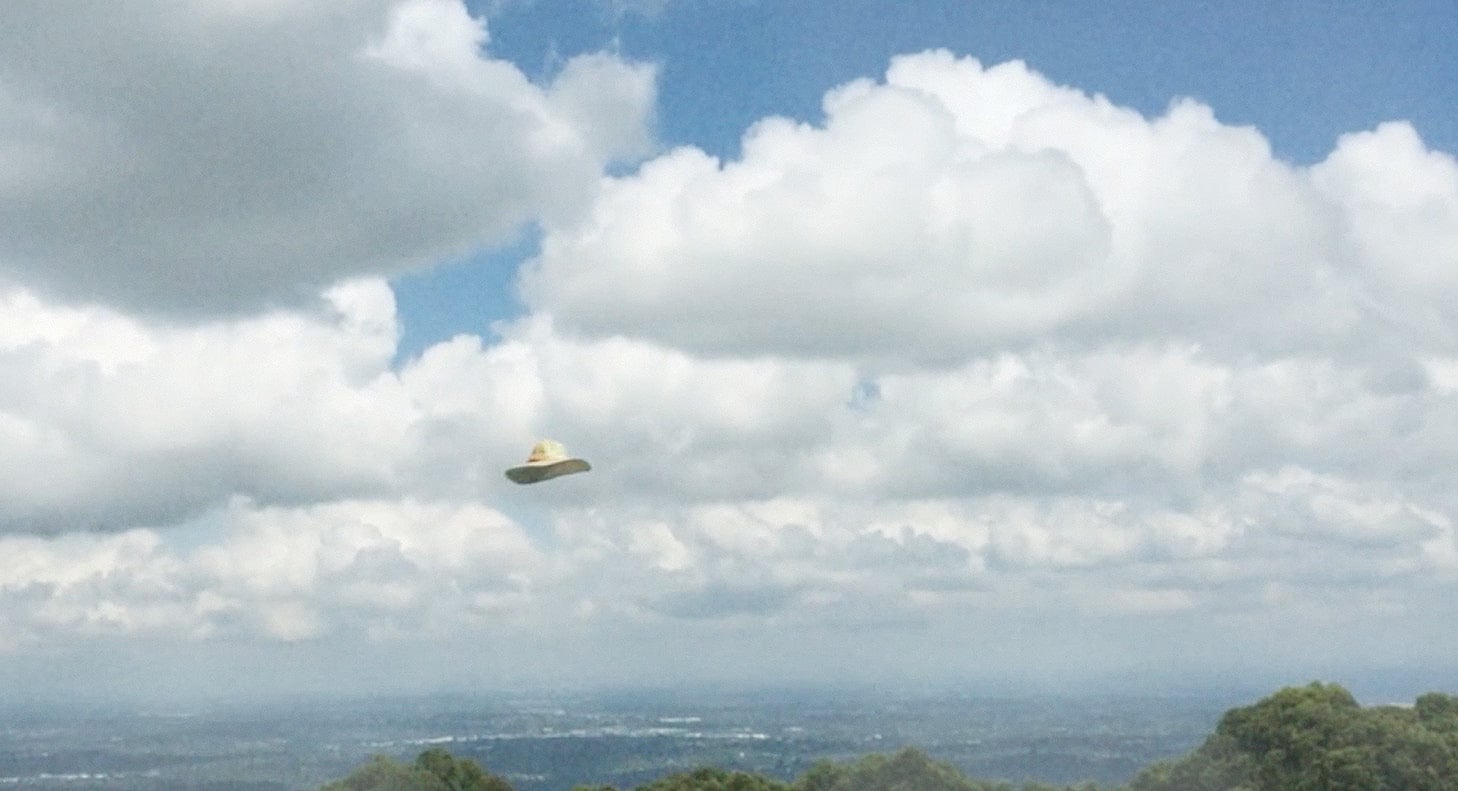 Whilst outwardly concerned with typologies of contemporary kitsch, Peoples’ practice is actually based in extensive research. He has racked up hours studying local history in the Belgrave Library, and even more on the internet, piecing together information about local alien and UFO sightings. The most famous local UFO sighting, indeed one of the most renowned and best documented in the world, is the alleged sighting and abduction of the 27-year-old woman, Kelly Cahill. The abduction is said to have occurred as Cahill drove home with her husband and three children on Belgrave–Hallam Road, through the foothills of the Dandenongs, in August 1993. Cahill claims to have spotted a UFO hovering just above the road shortly after midnight. The UFO quickly zoomed off, only to reappear as an unbearably bright light, after which an hour or so’s worth of Cahill’s memory was wiped completely from her mind. When she finally returned home that night, Cahill noticed a ‘strange triangular mark’ on her navel that she had never seen before — a vestige of her blackout and, she later uncovered through dreams and other memory recuperation techniques, of procedures performed on her body by the alien beings.2 Peoples prefers the term ‘alien’ to an alternative descriptor like ‘anachronistic’ to describe the old-timey homewares with their ‘seemingly invented sentimentality’ because he is interested in imagining that these objects might originally hail from another dimension. He studies them, like Stalkers in the Strugatsky brothers’ Roadside Picnic (1971), as if they were artefacts left behind by an alien civilisation. Moreover, Peoples links the proliferation of these curios in the Dandenongs with the high level of UFO sightings in the area, detecting a causal connection between the sightings and the ‘invasion’ of faux antiques into local shops and homes. His recent Instagram feed has been filled with videos by the artist of local picnic areas and lookouts in the Dandenong Ranges onto which he has superimposed flying saucers (in fact, the videos capture a straw bucket hat hanging from string). More forced connections. For the Alien Antique exhibition, Peoples has compiled a short video montage of these flying saucers in the landscape, set to music borrowed from a UFO-sighting-compilation-videos website that he frequents. We know that the late American artist, Mike Kelley, was also deeply preoccupied by the topic of aliens and UFOs, and what he called ‘the aesthetics of ufology’. In addition to charting genealogies of science fiction book covers, movies about aliens, and philosophical musings on extraterrestrial life, he was obsessed with the stories of people who claimed to have been abducted and probed by aliens. Kelley believed the ‘recovered memories’ of abductees were more likely the product of repressing traumatic memories. (He wrote in 1997: ‘The scenarios described in UFO abduction accounts are remarkably similar to the “recovered memories” found in the pop-psychology literature associated with repressed memory syndrome’.3) In many cases, the stories of abductees likely stemmed from the memory disorder of confabulation: the unconscious fabrication of memories in order to fill inexplicable gaps in one’s memory. As an object, the Alien Antique also attempts to fabricate memories through its aesthetic reimagining of the past. In addition to confabulated memories, Peoples’ sculptural installations connote the modality of conspiracy theories via their impressive webs of forced connections and overdetermined causal relations. In his much-mined essay, ‘An Archival Impulse’, Hal Foster aired his suspicion that a conspiratorial logic underpins some archival art, for archival artists interact with history less like an archaeological excavation site, and more like a building construction site.4 Reflecting on an aphorism of Thomas Hirschhorn’s, that his role as an artist is ‘to connect what cannot be connected’, Foster suggests that there is, sometimes, ‘a strained effect’ in archival art.5 He continues:

Indeed its will to connect can betray a hint of paranoia — for what is paranoia if not a practice of forced connections and bad combinations, of my own private archive, of my own notes from the underground, put on display.6

Foster turns to Freud to describe the basic logic of paranoia, explaining that the paranoiac is understood to project meaning onto a world ‘ominously drained of the same’.^7 He concludes by asking:

Might archival art emerge out of a similar sense of a failure in cultural memory, of a default in productive traditions? For why else connect so feverishly if things did not appear so frightfully disconnected in the first place?8

As part of his research, Peoples has explored the ontology of conspiracy theories based on the hunch that the Alien Antiques populating the gift shops of the Dandenong Ranges might stand-in for some local amnesia, that their carefully constructed artificial veneers might barely conceal a paranoid logic, one desperately seeking connection where there is, perhaps, none to be found. The William Ricketts Sanctuary located in the Dandenongs, also a source of interest for Peoples’ Alien Antique enquiry (the artist has researched and visited the Sanctuary, although it has not been explicitly referenced in his work to date), certainly suggests so. Born in Melbourne in 1894, Ricketts permanently settled in Mount Dandenong in 1934. He had a background making jewellery and ceramics, and between 1949 and 1960 made numerous trips to Central Australia to spend time with the Arrente and Pitjanjtajtara peoples from whose artistic practices and cultural customs he derived much inspiration. The Sanctuary comprises more than 90 large ceramic sculptures that portray anonymous Aboriginal people striking variously Christian and neo-classical poses. Earthly Mother is a portrait of a bare-breasted Aboriginal woman surrounded by swarms of Aboriginal cherubs; a diptych alternately depicts an Aboriginal and Anglo man each suspended on a crucifix adorned with concentric circles (the latter is presumed to be Ricketts himself). Another of the sculptures imagines the same pair of men with angel wings outstretched. Like the Alien Antique stores, the Sanctuary is inexorably entwined with the tourism industry of the Dandenong Ranges, which suggests the appeal of both sets of objects to the tourist psyche may be linked. Though produced between 1949 and 1960, Ricketts’ sculpture park gives the impression of antiquity due to the sculptures’ mossy patinas, their seamless integration into the rainforest gully landscape, and their neo-classical gestures. The holistic tableaux combined with snippets of Ricketts’ new-age philosophy (‘May we consecrate the Australian bush and speak both for and of it as poems of God’) deftly glosses over the violent dispossession of Wurundjeri and Bunurong lands when Europeans settled the Port Phillip region in the early nineteenth century, and the fact that the Aboriginal population of the region dropped by a staggering 80 per cent in the short period of time between 1834 and 1850. Ricketts’ sculpture sanctuary, like the Alien Antiques of the Dandenong gift-shop circuit more generally, possesses an aesthetic of forced continuity, which — in the colonial context of Australia — may hint towards more psychologically complex motivations than the mere production of touristic trinkets.

Helen Hughes is Research Curator at Monash University Museum of Art, an Assistant Lecturer in Art History and Curatorial Practice at Monash University, and co-founder and co-editor of Discipline magazine. For Karl, a far superior writer, but to whom this essay is dedicated all the same.