un Projects is based on the unceded sovereign land and waters of the Wurundjeri and Boon Wurrung people of the Kulin Nation; we pay our respects to their Elders, past, present and emerging.
un Projects
⟻
un 10.1 I’ve come across a set of Tarot cards. Part of British artist Suzanne Treister’s larger Hexen 2.0 project, this 78 Tarot deck decodes seemingly heterogenous histories surrounding post-WWII government military and scientific programs, countercultural movements, and cybernetics.1 Dreams, strategies and responses linked to these histories are given over to agents, objects and things linked symbolically rather than iconographically to each card. The cards have been used to perform collective readings for the state of the world. I am reading them. They are designed to be read. From card game to fortune-telling device to tool primarily for meditation and reflection, the modern Tarot posits a series of relational thematics between the Self and Non-Self, acting each time as a kind of connective tissue or communicative topology. Take The Chariot. According to poet and mystic A E Waite, author of the key twentieth century Waite-Smith deck, this card designates conquest over nature, all things external and not internal, and the rational in opposition to the mystical. Here, liberation will always be in thrall to the logical plane. In Treister’s Hexen 2.0, The Chariot is given over to the father of cybernetics, the mathematician and philosopher Norbert Wiener, whose theory of messages described communication and control in both machines and human beings qua machines. Treister’s extremely dense work is an induction to knowledge-formation working over several planes: the occult symbolism of the Tarot itself, the historical information which forms the content of Hexen 2.0, and their heuristic pattern-forming intersections. As I do a Celtic Cross reading, I move around the central Situation (Card 1) posited by the querent; each card I turn over finds meaning through its internal symbolism relative to its place in the topology. The Situation is covered by its Complication, and expands out to cards 3–10, which relate the Conscious, Unconscious, Past, Future, Querent, Environment, Hopes/Fears, and Outcome back to the Situation (Card 1). The reading becomes an event anchoring itself in the natural movement of space and time (diagnostically taking it as content) while simultaneously rupturing its flow (in order to transform it). Norbert Wiener is the first card, our Situation.

Complication (Card 2): the Five of Chalices typically denotes inheritance, legacy, and testament. In other words, a gift. In the Waite-Smith deck it is represented by a cloaked figure beside five chalices (fig. 4). In Treister’s Hexen Tarot, this card depicts the opening passage of American fantasy author H.P. Lovecraft’s The Call of Cthulhu, from 1926:

The most merciful thing in the world, I think, is the inability of the human mind to correlate all its contents. We live on a placid island of ignorance in the midst of black seas of infinity, and it was not meant that we should voyage far. The sciences, each straining in its own direction, have hitherto harmed us little; but some day the piecing together of dissociated knowledge will open up such terrifying vistas of reality, and of our frightful position therein, that we shall either go mad from the revelation or flee from the light into the peace and safety of a new dark age. 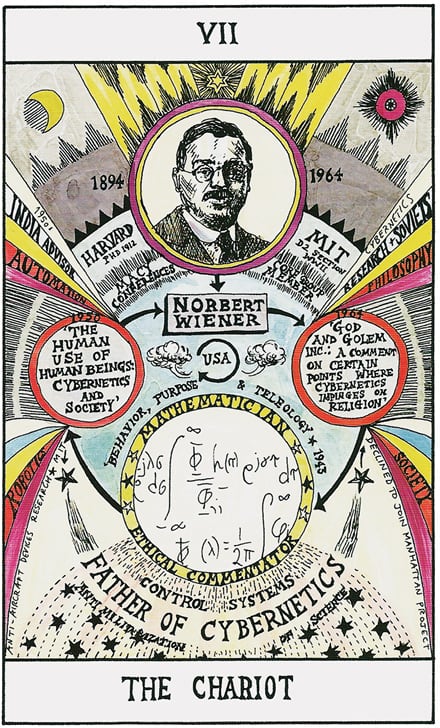 One year earlier, in 1925, the Russian socialist theorist and art critic Boris Arvatov wrote that by discovering the underlying ‘relations between people and things, knowing [their] socio-historical substratum’, we could direct the developmental tendencies of material culture.2 The Present utilises the Past. The Past shifts the Present. Touches the Future (Card 6): Arvatov wanted to see the Thing transformed into a co-worker of human practice, liberated from its former relations to production and consumption partly through the discovery and analysis of these relations. Rupture the flow in order to transform it. Marx too implores me to ‘leave this noisy sphere, where everything takes place on the surface’, and move underground, from symptom to underlying cause.3 Still, Lovecraft’s warning echoes in my ear: there is danger in an over-saturated connectivity matrix. Our minds tend towards cross-referencing and pattern-making, meaning that any web of heterogenous facts expansive enough to comprehend our informationally-dense world must be structurally unstable. Madness or a new dark age are lying in wait. Treister chooses another path, bringing the hidden to the surface encoded in a mystical system. The terrifying light of reality is occulted, to be decoded through the topology and temporality of the Tarot.

The Querent (Card 7): Us. The human machine might be a fine decoder, but it faces a structural problem: our minds will seek a solution to any rebus of information, even when there isn’t one. We risk creating a paranoid code that sees everywhere hieroglyphs needing to be deciphered. During WWII, Norbert Wiener instrumentalised this weakness for pattern-formation by mixing in with legitimate messages ‘a message that cannot be decoded; a non-significant message, a mere assemblage of characters’.4 The madness-making function of the connectivity matrix. In William Gibson’s sci-fi novel Pattern Recognition, paranoia and conspiracy theory are described as fundamentally egocentric, because both aggrandise the believer. Yet the veil between cybernetic and paranoid codes is thin and the theoretical jump from everything is connected to everything is controlled seems almost natural. Can we really tell legitimate messages from apophenia? Environment (Card 8): In Hexen 2.0 The Devil is given to Control Society, in which human creativity and desire become potential raw materials to be instrumentalised. The environment not as a cybernetic net but spider’s web. Conspiracy theory, then, may be a particularly skittish reaction to the quite acceptable idea that we exist in osmotic relation to our societies. And yet despite its revelatory and egocentric nature, conspiracy theory is not easily dismissed, partly because conspiracy itself is not a fiction. There are very real webs of control occulted from public view and, as Gibson’s characters are fond of saying, even paranoid schizophrenics can have enemies. In fact, the ‘conspiracy theory’ label has become a rather convenient modern pejorative. For anarchist musician and essayist Lawrence Jarach, it is a linguistic tool used to discredit certain ideas a priori as dangerous (yet risible) fantasy.

If the doors of perception were cleansed

Hopes and Fears (Card 9): Jarach takes the role of Hexen 2.0’s Knight of Chalices, a card signifying a dreamer, but one haunted by his visions. How to connect a dense matrix of information whilst avoiding quasi-messianic decodings, egocentric apophanies, or flight into the bliss of ignorance? We might start by displacing our individual selves from the centre. In other words, we might try thinking cybernetically. The Hexen 2.0 deck is designed to be read for the state of the world and not for an individual querent, unlike ordinary Tarot. A collective rather than individual exercise, a Hexen reading posits no special agency. What’s more, its structure ultimately mirrors the profound inner logic of its content, as an elaboration of the mystical thinking that permeates histories of modern science and technology. It allows us to link the seemingly dissociated knowledge described by Lovecraft in a remedial way. Without turning a blind eye. Or being blinded by complexity. For the early twentieth century Russian theorist and critic Victor Shklovsky, it is habituation that prevents us from experiencing the world in its fullness. Habituation devours what might appear otherwise as strange and surreal. For Shklovsky, ‘art exists that one may recover the sensation of life; [it exists] to make the stone stony’.5 Encoding technological and countercultural histories in a ludic process that borders several non-rational planes, the Hexen Tarot acts as an antidote to more extreme permutations of pattern recognition. And as an artwork, it transforms linked knowledge into a technique of its own perception. If its historical content is too dense to be understood all at once, the structure of the Tarot allows a smaller number of discrete phenomena to come into play and new, often unexpected, connections to be continually formed.

A code, a project, a game. A serious one. Beginning in 1950s the CIA, in collaboration with over 90 American institutions, ran experiments with hallucinogenics under the umbrella project codenamed MKULTRA. Timothy Leary, who would become a leading figure of the counterculture and, according to Richard Nixon, ‘the most dangerous man in America’, started out as one of the psychologists working with LSD at Harvard. Ken Kesey, author of One Flew Over the Cuckoo’s Nest and head of the Merry Pranksters, first took LSD as an MKULTRA test subject. Kesey was friends with Stewart Brand. And Brand created the Whole Earth Catalog, the conceptual forerunner of the WWW. The Hexen 2.0 deck has cards dedicated to Timothy Leary (The Magician), MKULTRA (Three of Swords), Steward Brand and the Whole Earth Catalog (The Hanged Man, Seven of Pentacles), and even one for LSD (Nine of Wands). Not all of the aforementioned historical connections are fleshed out in the Hexen cards, but that seems to be the point of Treister’s work: to engage an alternative mode of connecting and meditating upon knowledge that privileges the heuristic process over the presentation of a pre-synthesised totality. Treister problematises the rational form as the only sufficient or suitable means to engage with history. If the Hexen 2.0 project links larger governmental, military and scientific strategies to collective and individual responses — as movement in general and movements in particular — it does so in order to engage with everyday life as it is given, and to render perceptible the historical connective tissue that we don’t see. Habituated as we are to the Things that surround us — communication and surveillance technologies, cybernetics, the History of the 1960s — we do not necessarily have access to the forces and movements that shaped their current forms. In one of the tarot readings led by writer and musician Mark Pilkington at the ICA in 2015, Treister said that by isolating particular temporal points in relation to computing technology, ‘you could actually imagine going back to that time and then going off in a slightly different direction’.6 For those despairing of the current socio-political state, the Hexen Tarot might seem a cold comfort, with not much in the way of an identifiable politics. If Treister likes or dislikes the objects she treats, it’s hard to tell. Paradoxically, this ambiguity makes Hexen 2.0 eminently political. The multiplicity of stances contained within its constellation lends it a certain impartiality. Seeing the organic movement of a Thing can defamiliarise it enough to make us aware of it, able to see its latent possibilities for the first time. In the discovery of these affinities and affiliations, we are not told how to think. Curiosity is its own virtue. But eventually — as all oracles know — we must choose and act. So we set off, steering a path between madness on one side and the peace and safety of a new dark age on the other. The Outcome (Card 10) is, as always, yet to be revealed.

Deborah Birch is a researcher and poet interested in the crossover between rational and mystical systems of knowledge.