un Projects is based on the unceded sovereign land and waters of the Wurundjeri and Boon Wurrung people of the Kulin Nation; we pay our respects to their Elders, past, present and emerging.
un Projects
⇠
un 10.1

Moss. Thoughts on entanglement, representation and the material world

Moss is hard to draw.

I’m sitting in the garden of a small temple on the outskirts of Kyoto. In front of me is a thick carpet of moss, only occasionally pierced by a tree or plant, with a small path winding around its perimeter. There are houses further down the road, but up here all I can see is green. I can hear water dripping into a large stone pot behind me and the attendants’ conversation floats over from the entrance. I give up on another paltry sketch and resign myself to taking some more notes. I’d hoped to find something, capture some specificity, by confronting the ocean of mossy surface with my pencil. Capturing some of the experience of being here. But my sense of failure does push me to try to articulate, differently, what I find myself in front of: to think with the moss on the coexistence of autonomy and dependence. Mosses are meeting points, boundary-dwellers. They are a good example of total entanglement and ecological reliance. They cling to surfaces, mediating between the ground and the atmosphere, living in what is called the ‘boundary zone’. This is a thin layer of atmosphere, just above the ground, in which the airflow is minimal and the moisture is high.2 Their small stature is caused by a lack of vascular or root systems, so they are unable to hold themselves up and instead relying on the community for their protection and water.3 They are open to each other and they are open to the environment—their leaves are only one cell thick. In this way they are almost all surface. Here I’m reminded of Giuliana Bruno’s concept of ‘deep surface’, a defense of the surface and the superficial, which she argues is misrepresented by its negative connotations.4 The surface is the contact point, the membrane that facilitates interaction. Rather than a closed off and individuated ‘depth’, the superficial emphasises the networked, the relational and the ecological. The moss floor then, is a series of nested surfaces – from the macro to the micro. Looking at the garden I see a singular surface but am aware that these small surfaces are in conversation with each other and the world around them. Its openness, and role in the greater ecology, is also shown in its relationship to the trees that introduce verticality into the garden. Moss beds often enable the seeds of trees to gain a hold, increasing their chance to survive and grow.5 Their intense externality, entanglement and liminal existence, for Robin Wall Kimmerer, is the basis of a mossy ethics:

The patterns of reciprocity by which mosses bind together a forest community offer us a vision of what could be. They take only the little that they need and give back in abundance. Their presence supports the lives of rivers and clouds, trees, birds, algae, and salamanders, while ours puts them at risk.6 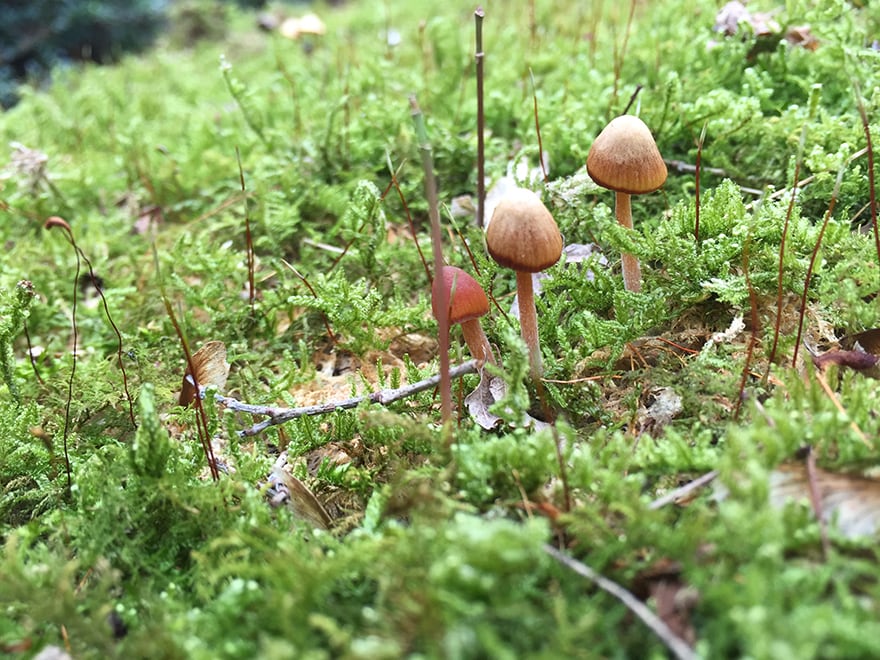 The moss garden is in the tiny temple of Gio-ji, which dates back to the 12th century. Gio-ji’s figures in The Tale of the Heike, an epic poem chronicling Japan in the 12th Century.7 In this particular story, a shirabyoshi (female performer) Gio was the court favourite of Taira no Kiyomori, an important military commander of the country. She took pity on a young dancer, Hotoke, who was new to Kyoto, and convinced Kiyomori to see Hotoke perform. Kiyomori was so captivated by Hotoke that Gio was spurned and kicked out of his house. With her livelihood and social status torn from her Gio, her sister and her mother, moved to a small alcove in the foothills to live an ascetic Buddhist life. They were eventually joined by Hotoke who, guilt-ridden, left the palace to live with them. I can imagine the four women living out their lives on this tiny property. Thrown from the rigid social hierarchy, they now construct their own world, a mossy sanctuary. Even now it is devoid of tourists. To what degree is this history held in the garden? Sitting here, what strikes me is the particular way in which space, form, colour and metaphor are constructed. Which brings me to its seeming autonomy, which coexists with its multiplicity.

Walking along the path around the garden, I am struck by its cohesion. In some ways this feels paradoxical because, like all things, it’s far from disconnected to its environment. The garden was formed, and tended, by people; moss itself is highly connected to the weather and the seasons, as well as the trees and other plants that pierce it and the animals that live there. Yet it’s also a garden, molded into a bounded visual field. Something I can’t interact with directly, only observe. To me it’s an image and smell. Its singularity also emerges from the way it distributes attention, smearing it across the space. Looking into the ocean of moss I suddenly feel omnipotent, a god overlooking a small universe. I find this fascinating: the ability to simultaneously exist as autonomous but representative of total connection through its material existence, and to be equally affective in both these registers. In the garden I am an outsider, an interloper, with little knowledge about the cultural and religious contexts that I’m finding myself in. I can only grasp at the edges of its specific significance, all of the unknown unknowns. Yet its demarcation as a spiritual space, surrounded by ritual and silence, is central to its experience. I need to also think through some of the ways it connects to Japanese and Buddhist aesthetics. This is a world unto itself—and one of which I know little—yet reading about it, what resonates with me is the concept of ma. Ma is the aesthetics of formlessness, of the spaces in-between that exceed representation.8 It can only be hinted at. This is tied to a central aspect of, for example, Zen Buddhism in which, ‘the beginning or end of space does not exist’ and this boundlessness can only be hinted at, rather than being directly represented.9 Gaps, spaces and emptiness are embedded with meaning within Japanese art and design. At the heart of this is grappling with external endlessness. To my mind, this is both the state of making and writing about art. The difficulty of writing, of capturing or unfurling something, is that rather than opening up new fields of thought, it can close them. Does this matter? How then would I write like the moss garden? What the garden is able to do is to use boundaries to dissolve boundaries. To create a defined field of meditation, of clarity, that models the boundlessness of the environment, without closing off interpretation. I feel like the answer lies in the perpetual coexistence of these feelings.

All images taken by the author at Gio-ji in January 2016.

Anatol Pitt has a degree in anthropology and art history from the University of Melbourne and is a fine arts undergraduate at the Victorian College of the Arts.

7. The description that follows is taken from a translated and illustrated synopsis by the Kyoto University Library, 2001: http://edb.kulib.kyoto-u.ac.jp/exhibit-e/otogi/gio/gio.html

9. I should note here that Gio-ji itself was not a Zen temple, rather part of the Shingon school of Buddhism, but I feel like the garden design has aesthetic similarities to Zen gardens. Antanas Andrijauskas, ‘Specific Features of Traditional Japanese Medieval Aesthetics’, Dialogue and Universalism, no. 1-2, 2003, p. 211.
➳
Seeing through Screens: Digital Media in the Gallery Space
Matthew Taft and Julian R. Murphy
⇤
How Aborigines Invented the Idea of Object-Oriented Ontology
Dylan Rainforth
Filed under Article Anatol Pitt
Advertisement
Advertise with un