un Projects is based on the unceded sovereign land and waters of the Wurundjeri and Boon Wurrung people of the Kulin Nation; we pay our respects to their Elders, past, present and emerging.
un Projects
⥫
un 10.1 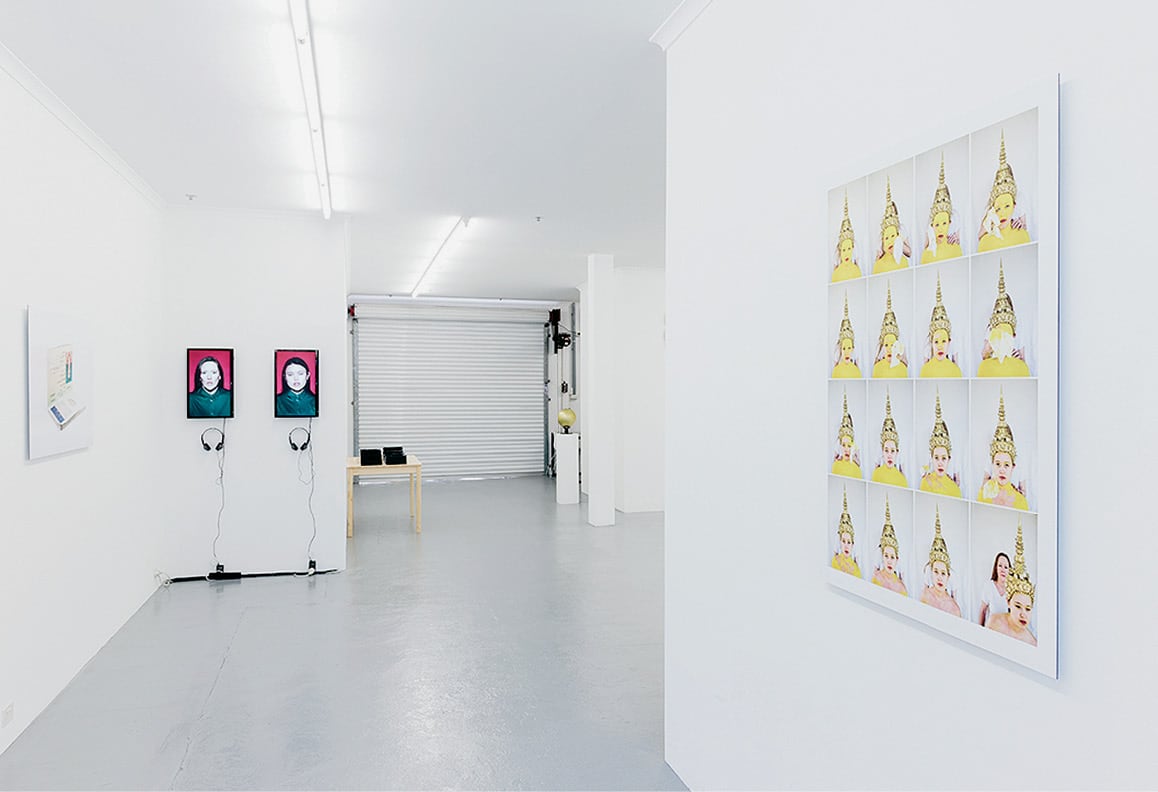 Splitting | Sides 13–31 January 2016 MOP Projects, Sydney There is a repeated sentiment seen in placards photographed at political protests around the world lately; it goes something like, ‘I can’t believe we still have to protest this’. The work in Splitting | Sides would suggest that political art in 2016 looks a lot like political art from four decades earlier, and given the regressive nature of recent politics, this is hardly surprising. Performance and its documentation, video and photography were interspersed with a liberal sprinkling of text. Everything old is new again — or, the more things change, the more they stay the same. The new generation of political artists featured in Splitting | Sides is clearly frustrated with reactionary government policies and community attitudes. But the motivations also lie in something more personal — the split cultural allegiances held by many in our multicultural society. While some of the works in this exhibition addressed these individual experiences in straightforward and sometimes blunt ways, others took a more divergent approach, evoking the fragmentation of contemporary experience and calling into question how identity is considered and formed more generally. Curated by Andrew Christie and Brigitte Gerges, the exhibition included the work of Christie along with Dominic Byrne, Frankie Chow, Navid Ghezelayagh, Martin James, Hanadi Saleh, and Andrea Srisurapon. A succession of photographs of Srisurapon having her skin wiped clean of yellow pigment greeted visitors as they first entered the space. The artist was revealed to the viewer frame-by-frame, by the hands of a figure standing behind her whose identity was obscured by Srisurapon’s elaborate Thai headdress. In the final frame the artist moved away revealing the figure behind her to be a Caucasian woman — in fact Srisurapon’s mother. It is this duality that Srisurapon played on in her other works, Passports and Pauline Hanson’s Maiden Speech (both 2014). The former depicted two passports belonging to the artist’s mother. Detailing her maiden and married surnames respectively, the documents prompted questions about changeable and inescapable aspects of identity. Pauline Hanson’s Maiden Speech took this further, with the artist’s mother reciting the speech in fluent Thai while Srisurapon read it in English. Frankie Chow took a more direct approach to questions of racism in her work Murmur murmur! (2016). Video documented a performance in which Chow repeated the phrases ‘ching chong’ and ‘fuck off’ in deadpan fashion, the words gradually losing meaning as the performance progressed. Hanadi Saleh’s work Devotion (2016) played on notions of familiarity and understanding. The sculptural relief work sitting high on the wall was recognisable as Arabic script but beyond its decorative surface would not reveal its true meaning (Allah, or God) to those not literate in the language. Saleh’s work sat in contrast to the works of Martin James. As well as jingoistic Australian woodblock prints in the style of Socialist propaganda posters, James presented numerous stubby-holders printed with various notable Tony Abbott quotes. Evoking discussion around the barbeque or yelling at the television from the couch, they could be seen as placards for the apathetic. Dominic Byrne offered an alternative construction of Australian identity with G’Day LA (2016), a selection of printed e-books presented as giveaways in the space. Commemorating the most valued Australian export, actors who have ‘made it’ in Hollywood, the convoluted texts hailed from the series Success Facts and their variously depleted quantities reflected a popularity contest. Co-curator Andrew Christie’s work Made in Hong Kong (2016), a globe plastered in the gold stickers of the work’s title, raised questions about national identity in a global world whilst also arousing nostalgia for a time when such stickers were ubiquitous. Navid Ghezelayagh addressed the exhibition’s theme thoughtfully with his work Scattered (2015–16). A stack of lightboxes displayed square travel photographs, the images not conveying a clear narrative or sense of time. These fragments evoked the disjuncture of not belonging to a particular place, as well as the fragmentation and reassemblage of memory and experience that occurs through the process of photography and posting images online. The accompanying exhibition catalogue featured an ambitious collection of texts, numbering nearly as many as there were works in the exhibition. Covering issues from gallows humour through to the medicalisation of terror, the ambitions of this reader-like project exceeded the scope of the exhibition, with potential for future development. For political art to endure, its end point should not be its starting point. Effectiveness comes from transcending personal experience in order to speak to a more universal human condition. Reiterating, reframing and giving airtime to bigotry may well be confronting to those who sit outside of such cultural dualities, and a cathartic reclamation for those on the receiving end of such bigotry. However, the effectiveness of this confrontation is contingent on the broader evocations and considerations arising from such work. The political is of course personal — but some of the experiences being worked through in Splitting | Sides are perhaps a little too raw just yet.

Chloé Wolifson writes about contemporary art and ideas for various arts publications and institutions, and curates exhibitions and public programs. She lives in Sydney.