un Projects is based on the unceded sovereign land and waters of the Wurundjeri and Boon Wurrung people of the Kulin Nation; we pay our respects to their Elders, past, present and emerging.
un Projects
⤂
un 10.1

The artist as transcendental empiricist 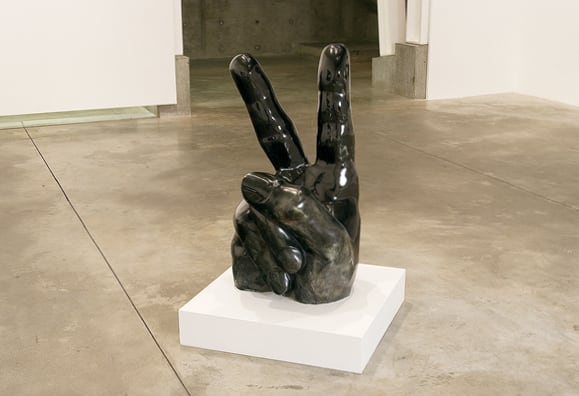 Boris Arvatov’s understanding of the object as co-worker, in which the object is regarded as more than just passive matter, is reflected in various contemporary philosophical discourses including Affect theory, Object Orientated Ontology, Speculative Realism, and New Materialisms. Each of these discourses rejects the idea that matter is a mute or passive substance that force enlivens, that matter is nothing til force acts upon it. What Arvatov and contemporary material thinking have in common is the contention that there is something more in matter than mute substance. Interest in the potentiality of objects — in what objects can do and not just what we do to them — invokes an agency or mystical force inherent in matter. This makes matter alchemical or hylomorphic, where the divine is impressed on being in its very materialisation. Metaphysical experience of the object is one of the conditions of what the philosopher Gilles Deleuze calls transcendental empiricism. Transcendence is not to be understood here in the normal sense of the word but instead describes the distinctive capacities expressed in the object. Philosopher Brian Massumi writes:

every experience is immanently self-transcending — to the exact extent to which it is lived qualitatively. Transcendence is done away with — but not the lure of a moreness to life that makes the idea of transcendence compelling.1

All objects have this ‘moreness’ that exceeds their use value, or our understanding of what objects can do. Artists are intensely familiar with the force of materiality, its aesthetic affordances. These affordances exceed ‘objective’ properties such as colour or weight, or shape or size, as well as the ‘subjective’ affordances of an object’s representational profile, to include matter’s esoteric, atmospheric or intensive elements. This suggests that every work of art is a co-constitution that involves both the material affordances of the object itself and an array of human and non-human agencies that function to hold a work together. It is a basic tenet of actor-network-theory that objects are held together in relational arrays whereby certain relations have to hold together for the object to remain stable. Canadian Elizabeth Zvonar and Australian Susan Jacobs are two artists whose work explores the affordances of material properties and the relational arrays that hold objects together. 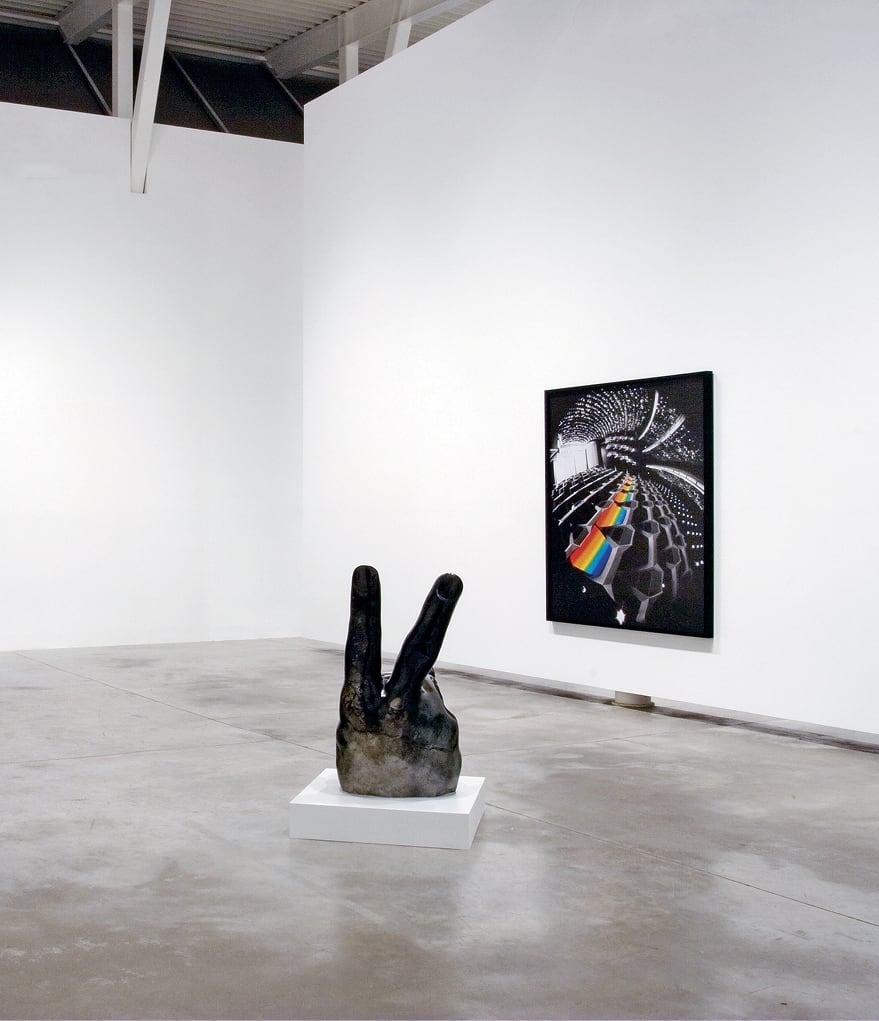 Based in Vancouver, Zvonar’s practice regularly engages with metaphysics and mysticism. Notable works include Until Then Then (2006), in which the future of Voyager One and Two was read by psychics and astrologers and then mapped and etched onto two round mirrors which then repeatedly reflected each spaceship’s future into infinity, as well as her many large digital inkjet prints of hand-cut collages facetiously exploring figures from fashion magazines, National Geographic and the occult all at the same time. However, it is Zvonar’s Tiny Devotion, featuring bronze and antique ivory devotional beads, from her exhibition The Challenge of Abstraction at Daniel Faria in Toronto (2015), that is most pertinent to mention here when discussing the metaphysical moreness described by Massumi. The work features bronze casts of two fingers laying alongside cast bronze fruit pits (including those of date, cherry, apricot, peach and nectarines), teeth, marijuana buds and hash balls, which are threaded with antique ivory beads to create the shape of a necklace presented as a snake. Whether viewed as prayer beads marking mantras or as meditating worry beads, these talismanic objects evoke the vital potentiality of matter. Zvonar may just be counting how many teeth she still has, the joints she has smoked or the summer fruits she has feasted on, but she may also be warding off evil spirits. The disembodied fingers in this arrangement remind us of our role in this assemblage. The fingers are a recurrent motif for Zvonar, presented in porcelain in There Are No Rules/History of Art at Western Front in 2009 and also in *Sign of the Times for Exponential Future at Morris and Helen Belkin Gallery in 2006. Sign of the Times* is a black stone sculpture of a hand with the index and middle finger raised whilst the other fingers are held to the palm by the thumb. The gesturing of the large mass of serpentine carved stone invokes either the universal sign of peace, or alternatively it could be enacting the ups, a gigantic ‘fuck off’. 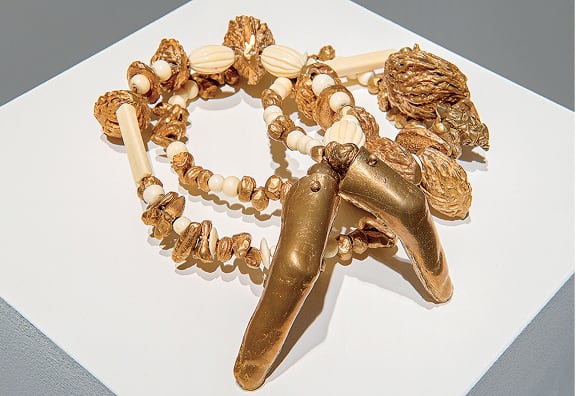 With this two fingered salute, Sign of the Times draws our attention to the magical potentiality of the object. The green black serpentine stone used in the work comprises a group of related minerals, including Antigorite and Chrysotile, which are believed by some to arouse kundalini energies to aid in enlightenment. Just as the peace sign can convey either an insult or symbol of defiance, the stone’s spiritual nature is equally uncertain and ambiguous. This is the moreness that Massumi describes capturing the immanent nature of transcendentalism, such that all objects may be characterised by their plenitude, their virtual potential; the potential in reception, in use and misuse in projection, appreciation and enjoyment, in rejection and in abandonment. This virtuality charts the object’s affects, sensations, qualities and forces. In What is Philosophy? Deleuze and Guattari clarify the relationship between materiality and sensation by noting how ‘sensation is realized in the material’.2 They go on to reveal how material becomes ’the sensations themselves to the point of being part of them or indiscernible from them’.3 However, they also add that ‘in principle at least, sensation is not the material… Sensation is not realized in the material without the material passing completely into the sensation.’4 Philosopher Joshua Ramey highlights the magical inclinations of this formulation when he writes ‘while art deals in sensation, the virtue of art … is that art unleashes the forces of a becoming-imperceptible, a knowledge that is at once a sorcery’.5 Becoming imperceptible is what art objects do. This is the moreness or potentiality that is slowly revealed as Zvonar’s Tiny Devotions pass into sensation. Susan Jacobs’ HD video, Prospects (wizard melt), also explores the sensational affordances of objects. Exhibited in 2015 at Ballarat Art Gallery as part of the Guirguis New Art Prize, the video was displayed alongside a drilled aluminum glove and a fibrous lead wire with crushed magnetite on it. The film shows part of a thumb repeatedly rubbing a small silvery wizard gripped carefully by the pads of the pointer and index fingers of the left hand. Running for 11:11 minutes, the film is cropped closely, showing only the fingers massaging the wizard with glimpses of the interior of a building including a person passing by on a bridge in the darker background. Over the course of the film the thumb appears to be working towards a goal of some sort as it erodes the wizard. Sparkly flecks can be seen on the pads of the fingers with the top half of the small wizard being slowly excoriated away. Soon the fingers swivel the wizard around to focus on the lower half of the mystical figure. The fingers work hard at abrading the metal and I wonder what they are trying to achieve? Is this a new form of alchemy by abrasion? As the metal begins to chafe off, discolouring the fingers, one begins to wonder if this is the point where the material passes into sensation? The wizard, Jacobs informs me, is cast in Gallium, a soft post transition metal with a melting point sitting around room temperature on a Melbourne summer’s day. She goes on to say how Gallium was initially discovered by chance in research in spectroscopy (the study of interaction between matter and electromagnetic radiation) which once again points to the intensive character of matter and what objects can do. 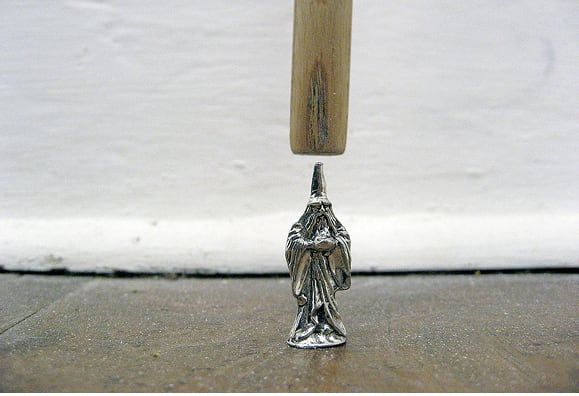 Jacobs has previously used wizened Merlinesque figures (i.e. long hair and beard with flowing robes definitely not short haired, scar on forehead, boy wizards) in her exhibition Hard Age New Edge at Sarah Scout Presents in 2010. Jacobs turned the magic on itself by melting pewter wizards alongside pewter cups and daggers. She then used this material to fill in gaps, or to magically hold up sticks. Here Jacobs repositions the pewter as if the shamanic figure of a wizard is working the magic, inviting you to suspend your judgment of what the object can do. One may speculate that Jacobs’ interest in the potentiality of the materiality of metals is a further instance of Deleuze and Guattari’s claim that:

what metal and metallurgy bring to light is a life proper to matter, a vital state of matter as such, a material vitalism that doubtless exists everywhere but is ordinarily hidden or covered, rendered unrecognizable, dissociated by the hylomorphic model.6

Ramey adds that ‘in metals more than any other sphere it is unclear where a potency ends and a form begins’.7 Invoking vitalism once more, Deleuze and Guattari note how ‘an energetic materiality overspills the prepared matter, and a qualitative deformation or transformation overspills the form’.8 Materiality overspilling matter, a qualitative transformation overspilling form: magic happens. This is the transformative potential of art as it is expressed in Zvonar’s and Jacobs’ practices.

Andrea Eckersley is an artist and writer who lectures in Fashion Design at RMIT and is the art editor at the Deleuze Studies journal. Watch a collaborative companion video work to this article titled Wizard Rolling(2016) by Andrea Eckersley and Susan Jacobs, as part of un Extended 10.1.