un Projects is based on the unceded sovereign land and waters of the Wurundjeri and Boon Wurrung people of the Kulin Nation; we pay our respects to their Elders, past, present and emerging.
un Projects
↽
un 10.1 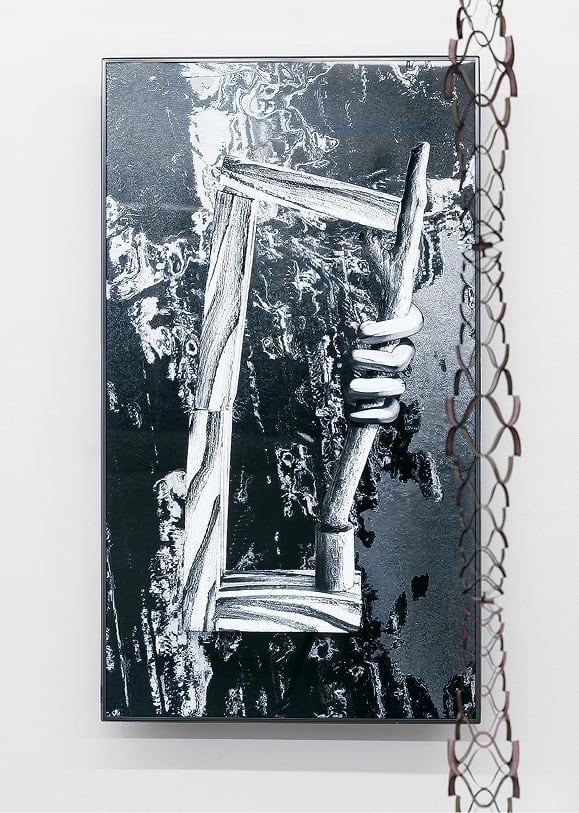 Spooky Action at a Distance at Bus Projects, 9–30 January 2016 Amalie Smith, Amitai Romm, David Stjernholm, Rasmus Myrup, Valérie Collart and curated by Nanna Stjernholm Jepsen The polar icecaps have melted and Bus Projects finds itself submerged in the underwater world of Spooky Action at a Distance. This exhibition is the second, return iteration of an exchange project between Copenhagen-based curator Nanna Stjernholm Jepsen and Melbourne-based curator Kim Brockett. Spooky Action explores two concepts: the monumental and pervasive notion of the Anthropocene, and Albert Einstein’s theory of quantum entanglement as the subtle and seemingly inexplicable connection between objects (or particles) in the quantum realm, which he rather endearingly described as ‘spooky action at a distance’. The Anthropocene epoch is an emerging geological time scale, following the Holocene, that recognises the accumulated effects of human activity as a driving force in the dramatic transformation of Earth. Rightfully so, the Anthropocene has become a mainstay subject in contemporary art and discourse, and there are a plethora of environmental art practices that use the concept as a political device to address the urgent need to combat climate change. In Spooky Action the material effects of the Anthropocene are expressed in the affected (and comic) inundation of the gallery by rising sea levels: Amitai Romm’s Exfoliation, a series of laser-cut sandpaper sculptures stretch from the floor to ceiling as if seaweed; Gone Phishing by David Stjernholm, a group of pneumatic tubes caught floating in scattered fishing nets; and, Blocking Formation of Processed Wood and Geological Material (After Castor) by Rasmus Myrup, a collection of walls that resemble beaver dams made with colouring pencils ‘block’ entrance to the smaller Bus galleries. Spooky Action, however, is not merely a staging of an environmental aesthetic — it does not address the Anthropocene as a solely geological phenomenon. Rather it expands the concept to include other forms of human evolution and technological advancement. In Spooky Action the physical, geological and material understanding of the Anthropocene is merged with our lived and conceptual viral existence — combining our contemporary physical and the conceptual Anthropocene-dwelling selves as an illustration of quantum entanglement and this discontinuity of time, space and matter. Einstein’s poetic theory of quantum entanglement describes how intertwined particles can immediately affect each other despite potentially infinite distances in space, violating our deepest intuitions about nature by binding together the fates of objects on opposite sides of the galaxy. At its core, quantum entanglement, or magical duality, is an unsettling idea and many of the works in this exhibition play with this irrational or spooky feeling in both subject and form. There is a tension created between surface flatness and illusion. Serpent and Twisted Coloumn by Valerie Collart are two mesmerising black and white animations, pushing and pulling between the screen as sculptural object and image surface by depicting a virtual three-dimensional generated fictive sculpture, rendered with computer generated painting textures and flattened again by its presentation in black and white. The works become virtual ghosts, existing inside the image, mimicking sculptures in the real world. How do we relate to these mirrored multiple dimensions, as both makers and viewers? How do we relate to and between the physical and digital layers of our reality? Michanikos by Amalie Smith, a two channel HD video loop shot with dancer Sophie Mage, depicts a folk dance first created in response to the many cases of diver’s disease on Greek islands in the late 19th century. The right-hand channel displays Mage wearing a motion capture suit tracking her moving body around a blank white cube. The video on the left is the virtually-animated result of her digitally-captured body dancing the Michanikos as a submerged diver. Her body, now in a projected heavy vintage diving suit, flails about at the bottom of the sea. The audience is perhaps entranced by the projected slippage between real and unreal, entranced by the capture and representation of the dancer. Yet, this slippage distracts from the subject of the dance itself, a reenactment of decompression sickness, which is the literal physical effects of moving between realms, from the deep sea to the shore. Is this a warning? We regularly participate in this simulated projection of our bodies into virtual realities through varying gaming technology, such as Nintendo Wii. In this we are enthralled in our own suspended disbelief. Who knows if we’ll snap out of it in time to realise we’re actually fucking up the world we literally inhabit? Spooky Action complicates or undermines the usually straightforward use of the Anthropocene concept, as something more than just a protest or environmentalist aesthetic. It does not seek a strict definition of what the Anthropocene might look like, or how it is used in contemporary art. Spooky Action is an exhibition that instead moves toward a more complicated framework of aesthetics, contexts and concepts, outside of that strict understanding of what an environmental aesthetic is. What does it mean to exist in this contemporary age of dual reality? How do we reconcile this dual reality?

Kelly Fliedner is a writer, curator and podcast-maker, but mostly she just enjoys a good book club.