un Projects is based on the unceded sovereign land and waters of the Wurundjeri and Boon Wurrung people of the Kulin Nation; we pay our respects to their Elders, past, present and emerging.
un Projects
←
un 10.1

Reports from a Kitchen 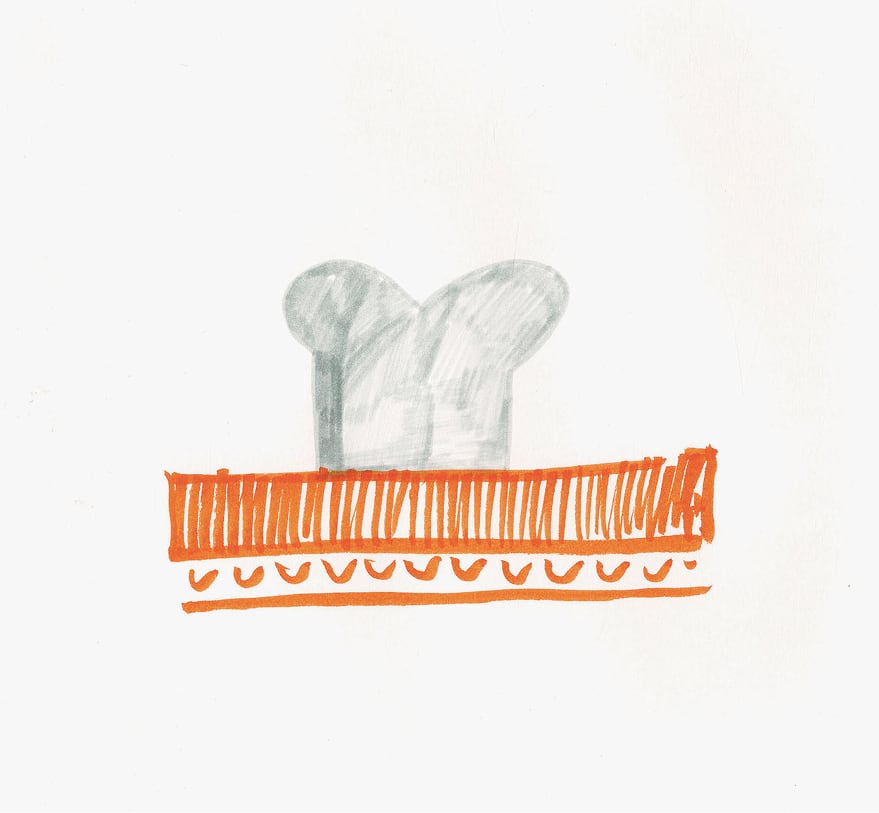 In German bread is brot and butter is butter I know this because I’m Toaster In German toaster is toaster — kitchen is küche that’s where I live and work mornings mostly in between Wasserkessel who’s desperate to please and Mauer who never speaks or moves What respect I have for Mauer! Blank and sturdy Mauer! Not a peep nor a grimace even with visits from nail and hammer In German hammer is hammer — nail is nagel I wonder, does Mauer know this? Or, perhaps Mauer doesn’t care to know I’m sorry to say Wasserkessel is very stupid constantly bored speaking wet breathy nonsense In German nonsense is unsinn — speaking is sprechen to which big flat Mauer never responds not to taunts nor to whistles not even to false praise Not a word from you today, Mauer? Wasserkessel will sometimes goad and I say yes! not a word In German silence is stille — word is wort I’ll never admit it to Mauer but this silence, cool and vertical burns me up inside You see, I know about the horror — horror is entsetzen taking place behind the calm I know about the stinking sadness piling up on the other side I’m furious and aroused but what can I do? Silence is Mauer and Mauer is silence. And so, back to our lesson In German crumb is krume — burnt is verbrunnt And water? Well, that’s easy! wasser But I dare not sip for fear of becoming Wasserkessel

It’s a hot day in late August, 79 AD I watch as peas follow each other into the pot spiders abseil down crevices

stove and counter table and wall

and a century goes by

It’s true what they say I was there when the roof fell in became the floor when the peas overcooked the crevices foreclosed the ants turned into gunk What else can I tell you that you haven’t read online? Time’s clumsy foot couldn’t squash the cockroaches

who continue to meet

that life is not easy

a wet accumulation of filth

And what happens to this filth? It expands inside you filling every pore until you’re squeezed, rinsed, wrung out

left to harden, but weirdly

this big ball of wobbling light

reflected in this sink

The 3am buzz comes not from the oven or the pipes or the fridge this buzz — sometimes a whistle comes not from the boiler or the broken faucet or the power sockets this buzz, a fizz — almost a sputter that began yesterday or the day before or after when the spaghetti was cooked and they ate it, delirious and muzzy squabbling and complaining not knowing that the buzzing had stopped or that daylight had come and gone and come they searched for it, long and hard hair was lost, faces wrinkled, necks drooped towards the earth Maybe it’s me? Unlikely Could it be a rattle in my chest? Unlikely And so they kept working dishes not cleaned, emails unanswered tea towels oily and brown There’s a rattle in my chest It’s just a buzz It rattles when we work It’s just a buzz Until, it was a Monday, the coffee had gone cold and the buzz became a gasp

If I were different I would be very different, more clever you would look at me and say You’re so well-informed! and I would say You’re low on milk! I would read the papers every day and exclaim Such dribble — what fools! I wouldn’t be confused, either Rather, I’d be eloquent and argumentative writing letters to editors and belittling dinner guests with facts June 28, 1914 August 13, 1961 February 11, 2016 I would also notice what’s overlooked in the papers such as last Tuesday when it was not reported that rubbish burst from the bin that the sink rebuked the drain that a walnut cracked itself that a banana had a panic attack and slipped out from its skin On that particular Tuesday not one paper covered the percolator’s lecture on Mount Vesuvius nor poor Protagoras of Abdera who

chopped his thumb clean off

And all of this happened just before the air soured and the water became so sharp it cut every glass in the house The following Tuesday, a new order? No! If I could speak I would have said There’s no orange juice! Or, by the third century AD That piece of chicken may have salmonella! Rome was serviced by eleven aqueducts The celery is floppy! bringing water from distant places The lettuce is past its use by date, so probably slimy! into the city for bathing, drinking fountains and latrines

If I’m in brine, am I to assume we’re all in brine? If I’m cramped, am I to assume we’re all cramped? If to live is to know what is not living can the not-living know what it is to live? Have we not met before in a dense shoal many years ago? If I have a question for you on my left I must have a question for you on my right: What new sea is this? What new seas awaits us?
⍆
Reinstating the smoko
Lana Lopesi
↢
Interview with Tahjee Moar
Shelley McSpedden and Meredith Turnbull
Filed under Article Tom Melick Ivan Ruhle poetry
Advertisement
Advertise with un