un Projects is based on the unceded sovereign land and waters of the Wurundjeri and Boon Wurrung people of the Kulin Nation; we pay our respects to their Elders, past, present and emerging.
un Projects
⇐
un 6.2 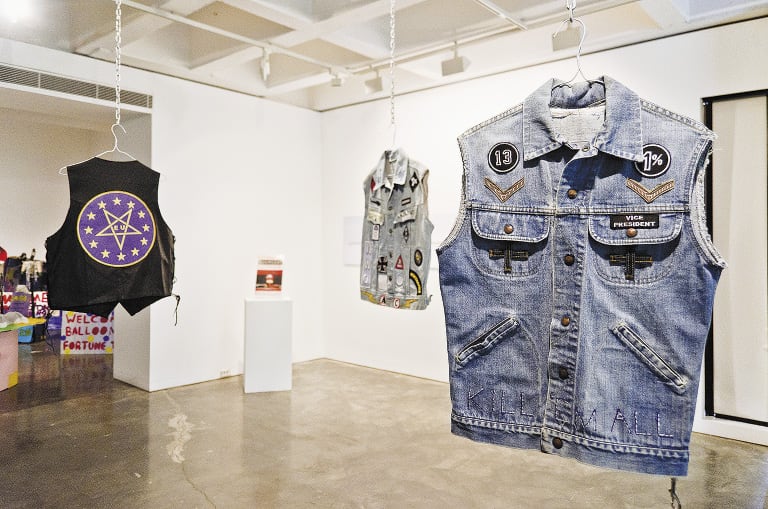 Against a backdrop of economic downturn, political misfeasance, natural disaster, climate change and mass networked protest, Crisis Complex explores the redefinition of crisis as a pathological state inspired and confounded by the awareness that things must and cannot change. Curators Laura McLean and Sumugan Sivanesan posit that ‘crisis’ has become a subject of fascination within the collective conscious, breeding and perpetuating the tides of uncertainty that serve to re-establish, rather than fracture, the status quo.

With the gravitas of anti-neoliberal critique, the curatorial statement presents us with a spectrum of hopelessness. The works in the exhibition, however, reflect neither this political angst nor despondency. Although we are provided with a disclaimer asserting art’s autonomy in the face of this crisis it describes, the unease emerging from such disconnect cannot avoid reopening the long-debated problem of the role of art in political critique.

Experiencing this uneasiness, however, paradoxically serves to facilitate an understanding at the crux of the crisis — the confoundedness of critiquing a system to which we are so inextricably tied, a conundrum of complicity from which art is not exempt but which it has the capacity to bridge. Crisis Complex, through relationships between concept and object, explores a crisis in meaning with the works in the exhibition providing entry points into the multifarious temperament borne out of this conflicted position.

Through the interplay of wry humor and aloofness, an emergent mistrust of ideology is exemplified by many of the works in the exhibition. Sin Titulo (Untitled) 2010, four drawings by Edgar Cobián, creates a patchwork flag for our times, comprising of political and pop symbols which by contrast are emptied of their individual power. In The Filthy Few (NATO), (E.U.), (UNITED NATIONS) 2010–12, Garifilakas draws on a similar cynical humor, with three customised biker ‘patches’ that hang with hubris as if awaiting a banded call to action — emanating an internal tension that complicates the question: who amongst them is friend or foe?

Based on the belief that established models have failed us, we are offered alternative strategies for facing uncertainty. Ella Barclay interrupts reality with Ebb 2012, a sculptural video installation suspended in space like a portal. Guarded by hypnotic apparitions that emerge and dissolve in a liminal mist of dry ice, it beckons our entry into the void. Adam North’s installation Generic Escape Capsule 2005 provides respite from both domestic and external crises through a re-purposed wardrobe, kitted out to sustain survival for up to two weeks. Carla Cecson’s Panic Button 2012 looms like a post-apocalyptic fete stall. Foregrounding a wall text proclaiming ‘The End’, the stall is reassuringly supplied with show bags containing contracts drawn up on behalf of Satan and his affiliates.

While many of the objects in the exhibition feature irony and operate deconstructively, there is also a selection of projects that, in contrast, earnestly engage in optimism and positive social exchange. In Telling Your Future 2011, Takayuki Yamamoto invites primary school children to write our destiny as they create personalised fortune-telling booths based on aleatoric games. Made of cardboard, paint, stickers and toys, the booths sit unmanned while a demonstrative video detailing each game plays in the background. In Signs of Survival 2012, Heidi Axelsen and Hugo Moline engage local residents from the Marrickville area to share their stories of struggle and survival over a cup of wild fennel tea. We are given access to these sites of social interaction via wooden apparatuses resembling bird feeders that act more like telescopes, allowing us to peer into other universes where micro-cosmic exchanges are signposted with text excerpted from these narratives. Reading as an accumulative account of all the conversations, a text piece on the wall made of fennel seeds strung together reminds us that ‘everything passes’.

Rather than dealing explicitly with the notion of crisis, or political realities, the works in the exhibition are representative of the epiphenomenon of ‘the crisis complex’, provoking consideration of contradictory issues tied to the conditions of our present day.

Janis Ferberg is a Sydney-based artist and independent curator.