un Projects is based on the unceded sovereign land and waters of the Wurundjeri and Boon Wurrung people of the Kulin Nation; we pay our respects to their Elders, past, present and emerging.
un Projects
⇺
un 6.2 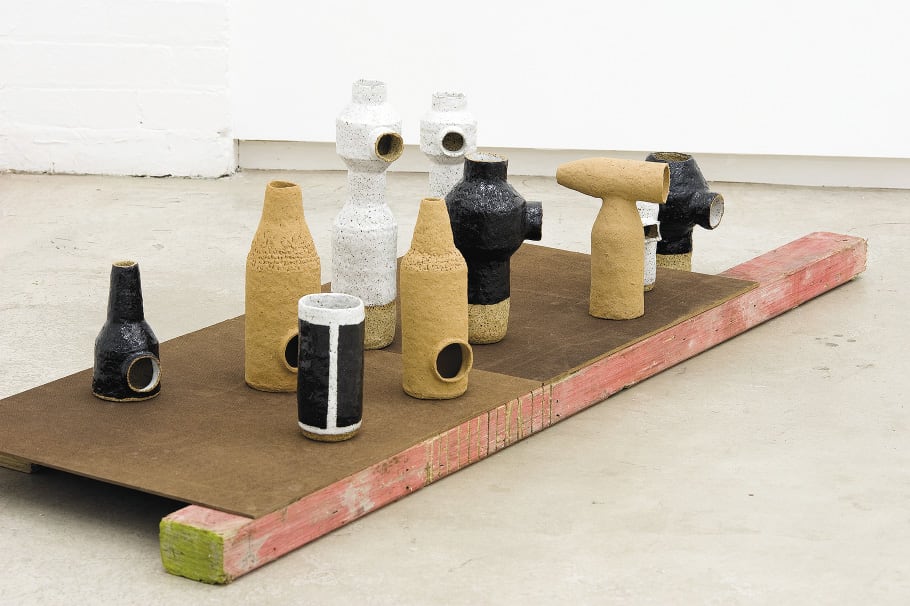 The titles of Jake Walker’s two solo exhibitions in July this year were homonymic descriptions. Paintings and Relief at Utopian Slumps presented a suite of nine paintings and an assortment of ceramic pieces resembling chimneys and camera lenses set on a low stage. Painting and Relief in Studio 12 at Gertrude Contemporary consisted of a floor-based tableau assembled from the debris of painting and the studio that formed an almost perfect rectangular perimeter but for the sculpture of a laptop assembled from palettes and boards that was tucked in the corner. Resembling a jerky three-dimensional topography of what you might expect to see in a Walker painting (Athfieldesque modernist architecture set in damp, rural landscapes), it’s heartening to see Walker use Studio 12 as the project-space it is intended to be. While relief described the sculptural form in both exhibitions, it is in the Studio 12 exhibition where we find objects and paintings assembled, rather than built. Processes preceding the display are made perceivable in the tableau, suggesting a relief offered by an engagement with materials usually interstitial in Walker’s practice combined to form a singular work.

Abandoning the fantastical abstract-figurative style that Walker has used to transform found paintings since 2006, Painting and Relief (Utopian Slumps), in its seriousness, looks like a coming-of-age show. Three of the nine paintings are set in low-sheen glazed ceramic frames the shape and size of rustic baking dishes which, if viewed on a screen, could look about the size of a Julian Schnabel painting — the heavy oil gesture of Walker’s work illusively belonging to something much larger in size. Walker’s decision to forgo the figuration seen in his previous work has allowed him to gift his full attention to the painting’s surface, and the image subsequent to it (imagine if houses didn’t have to house us: it would be just the skills of the builder and the materials’ resistance to gravity). Flanking these small brutes are two paintings that have been painted over varying degrees of white, the rutty strokes both concealing and extending the surface in accordance with Walker’s shift from figuration. The smallest painting in the show is completely white, except for an earthy, mouse-tail-sized sliver descending from the top edge.

To grasp the full integrity of these works, one’s view has to be adjusted to consider the way in which the works were created — that of the builder as opposed to the architect. Masquerading as the overly sober accumulation of a ravenous work ethic, these wall-based things are built, rather than designed, of layers of paint applied by an experienced hand and eye. Once the tacit rules and framing devices that anchor the reception make way, it is possible to enjoy a quiet melancholic moment with these turbulent little paintings.

In Painting and Relief, I was initially struck by the strangeness of the marks on the found and assisted materials, which were then made palpable by Walker’s typical subject matter of deformed landscapes and eccentric modernist incinerators and houses. A canvas lying inverted in the middle of the floor resembles a swimming pool; a ceramic chimney morphs into a camera lens. It felt humorous standing above this map made from residue; the sculpture of the laptop, watching from the corner — one enveloping the other. It will be interesting to see how this horizontal installation of peripheral materials will continue to inform Walker’s practice or even become vertical in later exhibitions.

And what does it mean to paint monochromes and engage with sculptural abstract expressionism in 2012? Could it be a yearning for the titans of yesteryear, or a prediction of the inevitable? The single unpainted linen work in the show aligns with Michael Sanchez’s term ‘screen povera’ attributed to painters offering rustic surfaces and foxed linens as respite to eyes tired from backlighting and the information glut. In an earlier and more literal prediction of this, Walker painted directly onto the screens of laptops that had been sourced free or cheaply — an emphasis on how quickly things become historical.

George Egerton-Warburton is a Melbourne-based artist.