un Projects is based on the unceded sovereign land and waters of the Wurundjeri and Boon Wurrung people of the Kulin Nation; we pay our respects to their Elders, past, present and emerging.
un Projects
⤙
un 6.2

The Future is Without You: Redefining Sarah Rodigari 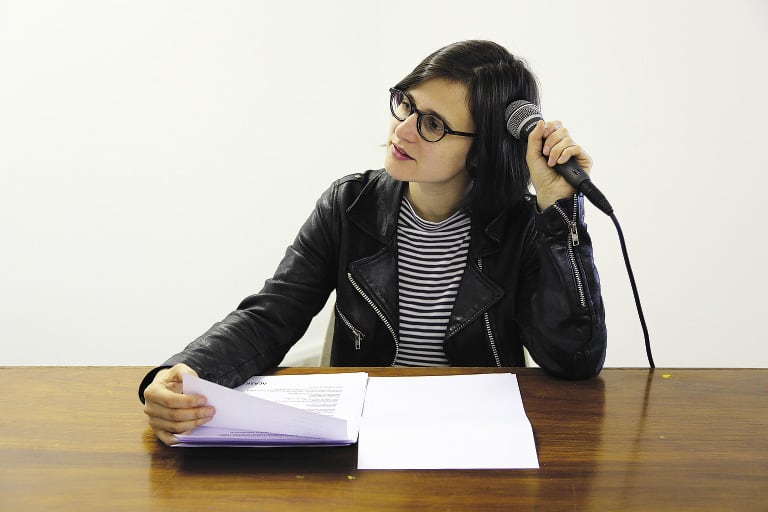 On Saturday 4 June 2011, Sarah Rodigari departed Melbourne for Sydney on foot. Titled Strategies for Leaving and Returning Home 2011, the walk served multiple purposes: Rodigari relocating back to the city she had left ten years earlier; as relief from growing fatigue with the polemics of her own art practice (in other words, her internal debate about the definition of participation and social engagement when applied to art); and as a key project in Performance Space’s WALK season (a series of projects that sought to provide artists with opportunities to engage new sites and audiences).1 She departed with a tent, a sleeping bag, four days supply of food and an open invitation for people to join her at any stage of the walk. She planned to cover twenty kilometres a day for a two-month period, to blog about it when she could, and to give in to the rest along the way.2 In her wake was an accumulation of possessions sold on eBay for the procurement of outdoor wear and an indefinite hiatus from Panther — the collaborative performance duo she established with Madeleine Hodge in 2001, and in which she had spent her formative years as an artist exploring the potential of participation.

In subsequent talks reflecting on the walk, Rodigari made some key observations that suggested that, while the walk did not provide her with answers to questions about her practice, it had brought them into clearer articulation. At Touchy Feely, a symposium on sentimentality in relational and social practice, curated by Amy Spiers and Pip Stafford at InFlight ARI Hobart,3 Rodigari delivered two talks — one a Pecha Kucha-style introduction,4 and the other, an extended dissertation on her work. Within these presentations Rodigari poignantly expressed that she now struggled with the idea that art should be anymore useful than it already was.5 She even went so far as to suggest that her walk was more akin to ‘a painting’ — due to its greater concern with ‘concept, aesthetics and affect’ over ‘effect’ — and that perhaps participatory and socially engaged practice didn’t really need ‘other people’ to be so obviously involved. Her reasoning: that art was already participatory, invested with a capacity to change and perform. A Tasmanian colleague in attendance later recounted, ‘You could feel the room turn against her.’ In another talk, this time for the SEAM2011 symposium at Critical Path, Rodigari expanded on these sentiments, stating:

After my arrival, I wasn’t sure if I should show slides of my travels, in which potentially, the journey, conversations and people are reduced to a humorous travel story. Or if I should say thuat this was a ‘conceptual work’ and nothing more could be said of it … The truth however exists somewhere in-between; the walk needs to be talked about in order for it to be imagined.6

It was clear, Sarah Rodigari’s practice was in crisis. Slowly but surely she was undermining a rhetoric of social practice that she had once championed, by questioning the roles, agendas and power dynamics between artist, audience and artwork. Having arrived in Sydney, Rodigari took up residence in Minto as part of SiteLab, an offsite research and development laboratory conceived by Rosie Dennis, artist and, at the time, Live Art Curator at Campbelltown Arts Centre. A suburb in the process of immense change, Dennis’ project provided selected artists with a shop in the dwindling business district of Minto Mall, continuing the in-depth relationship with the community that she had established over a two-year period, and a commitment to community engagement pioneered by Campbelltown Arts Centre since its opening in 2005. In Minto, Rodigari decided to use her shop for an evolving installation that would respond directly to the conversations and advice given to her by the local people that dropped by. Originally she planned to call the work ‘Welcome to Boredism’, a suggestion offered up by a visiting teenager, and one that resonated with Rodigari’s interpretation of it as a transcendent state of nothingness.7 She, however, later revised the title to U_ROYGBIV_ME (meaning ‘You Rainbow Me’). The title change was evidence of a crisis of conscious brought on by Rodigari’s growing feeling that positive social change was at the heart of Dennis’ intentions and the political frameworks supporting Campbelltown Arts Centre. A number of questions remained: who was the work really for? What was the artist’s role within the context of the project? Rodigari continued to search for ‘communal boredism’ by offering group meditations within the space. Following limited attendances, consisting mostly of supportive friends, Rodigari admitted the idea wasn’t working because no one other than herself really wanted to participate. Instead, she was left meditating on the question: ‘Why are social practitioners so hell-bent on projecting art onto people who never really ask for it in the first place?’8 In the end, at an audience member’s request, Rodigari agreed to organise a one-hour appearance by Santa.

Rodigari continued to probe questions about what defines social practice in Empty Gesture, a project presented at the car park turned white cube — Alaska Projects, Kings Cross. Here, Rodigari engaged six artists — Brian Fuata, Paul Gazzola, Agatha Gothe-Snape, Madeline Hodge, Joshua Sofaer and Malcolm Whittaker — to each participate in a forty-eight hour exchange with her that considered the idea of ‘participation as gesture’. From these encounters a work would be formed and exhibited. The selected artists shared interests in characteristics of participatory and/or social practice — process, conversation and collaboration — though these artists did not define themselves within the terminology of ‘social practitioners’. On opening night Rodigari performed one of the resulting works, There’s no such thing as any empty gesture 2012 — a reading of a Skype conversation with UK-based Joshua Sofaer discussing the project and Rodigari’s concerns. In the exchange, Sofaer asked Rodigari to tell him what she imagined the outcome of the project to be. One response was ‘a room of mist — that is the mist of gesture’.9 Asked to describe the mist, Rodigari furthered, ‘the mist is full of mystery’, and that ‘just before the mist is the rest of the world … the mist is man-made’. The exchange concluded with a request from Sofaer:

By 9am Joshua asked me for an empty gesture. He asked me to try and make it full. He asked me to influence his dreams. We said goodnight. He slept and I went about my day. I dedicated my day to him. For the next six hours I chanted voodoo in the name of Joshua. At 6pm he woke and I Skyped him again.10

On 20 July 2012, Rodigari delivered four hours of empty gestures to the largely sleeping populace of Sydney. A Filibuster of Dreams 2012 was a project developed for Serial Space’s Time Machine, which saw Rodigari take up the microphone at community radio station FBi 94.5FM during the graveyard shift. Beginning at the letter ‘A’, Rodigari systematically worked her way through the White Pages, making toast after toast to those listed, occasionally diverting from the task when a request from a caller came through. When asked about performing to an audience that may or may not be there, she said empathetically, ‘I am the one that projected this onto the world, nobody else had asked for it, so I just had to do it.’11 The toast ‘To hard work, may it always come easy to you’, resonated deeply — the labour of the artist made evident and primary.

Having removed the need for the audience to participate directly in the work A Filibuster of Dreams for it to still manifest, a week later, Rodigari took a further leap. In the performance installation Reach Out Touch Faith 2012 — presented at the Audi Artbar, Museum of Contemporary Art, Sydney — Rodigari removed her own body from the performance casting her totemic animal, a goat, in her place. Selected by Rodigari as the most suitable ‘spiritual animal’ for her — due to the animal’s relationship with mountainous terrain, and her familial connection to the mountainous region between Italy and Macedonia — the goat perched on a bed of hay between two stage lights surrounded by a steady stream of mist (this being the ‘mist of gesture’) and was protected by the minding eye of an attendant trained in animal husbandry. The audience was invited to spend time with the goat, and to reach out and make a connection if they wished. As a body double for both the artist and the art object, the presence of the goat playfully acknowledged the belief and desire of the audience to enact the work’s potential for meaning.

An Age that has lost its gestures, is for this reason, obsessed by them. For human beings who have lost every sense of naturalness, each single gesture becomes a destiny. And the more gestures lose their ease under the action of invisible powers, the more life becomes indecipherable.12

The recent practice of Sarah Rodigari can be seen as a questioning of the call to participate and the saturation of performance in culture. Her recent work asks was art not already participatory, and were people not already participating in it? It also speaks to the crisis of representation, asking how we can transcend and represent life within a culture cynical of expression? Rodigari’s projects recognise the limits and boundaries of socially-engaged practice and the delicate levels of power between the multiple, and varied, invested parties.

When I most recently caught up with Rodigari, I found her reading a book by Sophie Hope. It was aptly titled Participating in the Wrong Way. Rodigari is not turning her back on the audience. Rather, she is just redefining her relationship.

Susan Gibb is a curator based in Sydney.