un Projects is based on the unceded sovereign land and waters of the Wurundjeri and Boon Wurrung people of the Kulin Nation; we pay our respects to their Elders, past, present and emerging.
un Projects
‹
un 6.2 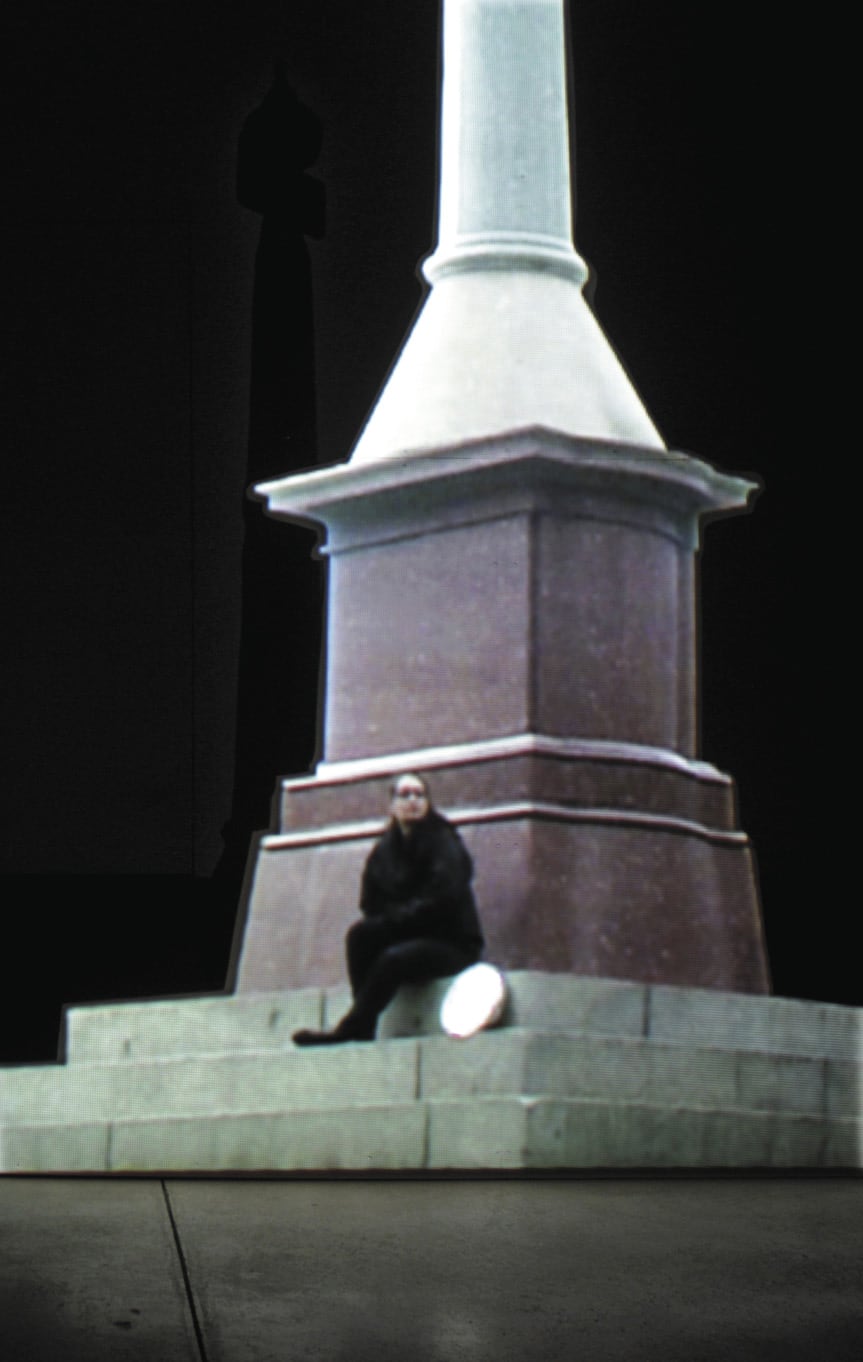 In her latest video work, Monument to the 8-Hour Day 2012, Michelle Sakaris muses on the place of time in contemporary society. Her eponymous subject was the Eight Hour Movement Monument in Melbourne, which commemorates the introduction of the eight-hour working day. To create her Monument, Sakaris sat at the base of this public monument for eight consecutive hours, filming the entirety of her anti-performance. Rather than re-present this video in the standard rectangular format, Sakaris enjoined the virtual image and the real object. To achieve this merger, she projected the video onto a wooden silhouette of the Monument, aligning the edge of the Monument’s image with the edge of the timber construction. As the eight-hour video plays in real-time in the gallery space, her only companion, an office clock, dutifully records the regimented passage of time. By focusing on this delimitation of time and its relationship to labour, Monument investigates the link between work and non-work, while also questioning notions of unproductive time.

Despite the anti-performance moniker, her recording and re-representation of these eight hours question the ability of art to produce meaningful work, yet also interrogate social attitudes towards time and the compartmentalisation of the day. The inclusion of the office clock reminds us of this temporal partitioning, while also questioning whose interests are served by the rational division of the day. Although originally a call by workers for fair conditions, the very credo the Monument announces places labour before rest and recreation.1 Sakaris’ restraint and calm demeanour suggest resignation and dismay at the rigid order of the day. For its part, Monument seems to mourn the loss of such clear divisions, yet the danger is in becoming nostalgic about their historical existence.

Beyond these historical concerns, Monument also investigates what has become of time in contemporary society. For the contemporary viewer, the notion of an eight-hour day may appear somewhat anachronistic, given the increasingly frayed divisions between temporal allotments of time to work and rest. In the interstitial zone between them, a ‘wasted’ or surplus time may seem apparent. Boris Groys has suggested that time-based art provides the best means of exploring the nature of non-productive time.2 Time, he argues, has ‘problems when it is perceived as unproductive, wasted, meaningless’ because it is excluded from historical narratives,3 becoming lost and ultimately excess. By marking out the passage of time, and inviting the viewer to assume a place alongside her, both Sakaris and the viewer intervene in the process, allowing for the contemplation of whether time is truly wasted or rather affords the opportunity for reflection. The admission of such a potential use of time, it would seem, celebrates ‘wasted’ time.

Ultimately, Monument to the 8-Hour Day works to reveal the containment of time within chronology, rather than its liberation within a formless flow. Literally embodying this control, the clock’s inclusion could imply that the work acquiesces to the temporal structure it questions. However, the durational aspect of Sakaris’ piece invites the viewer to contemplate the complexity of contemporary society’s temporal experience. Forgoing utopian tendencies, Sakaris suggests that our iron cage of work lies less with bureaucracy and rationalisation,4 than with our (ab)use of time. In our contemporary conditions, time, even within art, does not flow, it ticks.

Chris Williams-Wynn is an art history student at the University of Melbourne.